“Surely your goodness and unfailing love will pursue me all the days of my life.”  Psalm 23:6

(yesterday, early morning) The snow was falling and blowing all over the place….the flakes were small and icy cold. 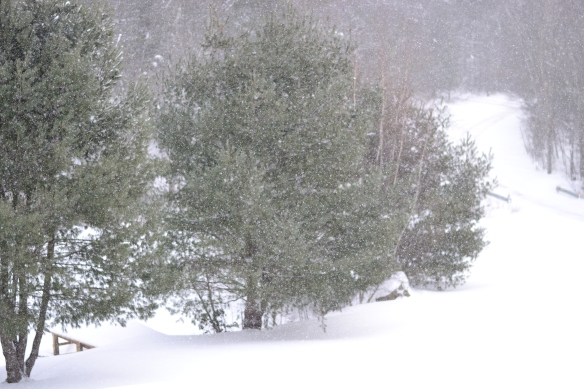 (yesterday, around noon).  The snow was till coming down and the road wasn’t plowed.

When the snow let up in the afternoon, Rich went out to plow the driveways with his tractor.  Ethan, Seth, David, and Caleb got dressed to play on the mountains of snow their Dad made.

They came inside with blotchy skin, it was so cold that it took a little while, and some hot chocolate, to defrost.

We began to see a little traffic on the roads again.

Grace and Jacob, who was recovering from being sick,  played a card game.  David searched the cupboards for something to eat, Rich was in the other room on a phone call.

The rest of these pictures are from this morning.  We rarely get a snowstorm that causes us to have to shovel our porch.

“This is ridiculous!” ~Sherlock the Cat

Shadow of the house where I was standing on the porch, and drifts against the garage.

You would think that with a three car garage I would not have to deal with this.

Sherlock is cute because he likes to all of a sudden dive into the snow and play like a crazy cat.  it was too much for Parker the Dog, so he pounced on the cat to play, too.

(Emily are you reading this?  I love you!)

a walking path through the snow 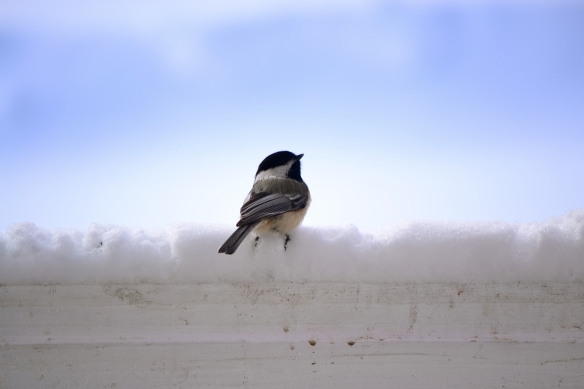 I took this picture back in the house, through the glass door.  The chickadees line up to get a sunflower seed from the bird feeder.

Seth was the last child to leave for school this morning.  He walked carefully to the bus.  He normally runs full speed, perhaps he didn’t want to go?

This morning was a two hour delay and frankly, we needed it.  I woke up to discover that Rich was already gone to work and all seven children were awake.  Sarah was sick on the couch, and Ethan was making french toast. As soon as my door opened Seth ran to me and asked if he could have a piece of French toast, too.  I stumbled into the kitchen and used the last of Ethan’s eggs to make Seth his requested breakfast.

Grace wandered around asking me for safety pins and I told her where to find them at my sewing table.

Jacob wanted french toast so I gave him directions on how to make the egg dip for the bread.  I made myself a cup of coffee and added French Vanilla creamer.

By the time Jacob was done making his breakfast, Seth asked for another piece, so this time I used Jacob’s left over egg.

David made himself scrambled eggs and asked me to put toast in the toaster for him so I did.

Sarah asked me to sit with her.  I got my Bible from my room and began reading the portions for the “bible in a year” program, with a reading in Exodus, Matthew, Psalms, and Proverbs.  I read it all out loud to her.  I read about the Nile being turned into blood and you should have seen Sarah’s face.  She gasped and was properly disgusted.  She asked several times, “Is this true?” and I was able to say in a motherly sort of tone, “This is the Word of God, and everything in it is true.”  We laughed over the names in the genealogies of the Israelites.  She said she thought they were weird names and I told her she was smart.  (I was impressed that she listened so intently, but when you’re sick you don’t have as much fight in you.)

Grace was trying to wear a pair of pants that fit almost perfectly; the waist was about 2 inches too big.  First she pinned them and then she tried a belt.  She was getting annoyed with the pants so I had her slip them off in my room and I took them in on my sewing machine.

As I sewed, screaming began in the boys’ room.  David found Seth playing the DS and took it away from him and Seth screamed at him and came to tell me about it.  My bobbin had just emptied (of course!) so as I talked to him, I got out my manual and refilled the bobbin, letting Seth help me by pressing the pedal.  “Slowly, Seth!  Slowly!”  David came and perched on my bed and I stopped what I was doing to say, “Dave.  SETH was not the problem in this situation.  YOU were the problem.  If you see Seth doing something that you don’t like, you need to come straight to ME and I will help you.  You are NOT Seth’s parent, I am his parent.  You are only Seth’s brother so he is offended when you boss him around.”  I made him give Seth back the DS (which Dave had put in his own dresser, even though it wasn’t even his) and then of course the GAME cartridge was missing, so I had to send Dave back to give Seth the game.  *sigh*  David was upset and wondering why HE was “always the bad guy.”

I got Grace’s pants taken in and now fit perfectly.  She was happy and asked if I would put her hair up in a bun for her.

I left my room and immediately smelled burning eggs.  Caleb was trying to make scrambled eggs and he did really well except he didn’t scramble them as they cooked.  Instead, he stood there and watched them burn, wondering when to “flip” them.  I ran over and flipped the eggs over and sure enough, there was a smoking, burned skin that I promptly tore off the top.  I took the egg patty out of the pan and placed it into the bowl containing french toast egg dip remnants.  I got Caleb a plate and some cheese, hoping with the cheese to make the eggs more palatable.  He didn’t complain or say anything. He just ate them.  I’m sure they had a taste of ash and cinnamon to them, but like I said, he had no comments.

Sarah was thirsty and requested a gatorade.  I went in the pantry but did not find any so I got her a juice pouch.  She wanted it in her teacup so she put the straw in and squirted juice into the cup, and some onto the coffee table, too.  I got the wood cleaner and paper towels to clean it up.

I sat Grace down and  put her hair in a pony tail, then braided it and sent her upstairs to pin it into a bun herself.  I noticed later that it didn’t happen.  She smiled and said that she gave up. She went to school with just a pony tail.

I noticed Jacob and Ethan both quietly reading their Literature books and secretly fumed, wondering why I hadn’t seen them doing their assigned reading YESTERDAY when they had the entire day off.  I may have even said something sarcastically but received no reply.

Finally, the High School bus came and took four children away to school.  I had another hour to get Caleb and Seth ready by washing faces, making sure their teeth and hair were brushed, and turning on an episode of Arthur.  I had nuts and a banana for breakfast and Seth ate a hotdog, a bowl of applesauce, and half a banana so I think it’s safe to say that his appetite is back after having the stomach bug.

I emptied a dishwasher, loaded the other one and pushed “start”.  I scrubbed off the island.

Eventually, the other two boys got on their busses and I could breathe a sigh of relief.  I love them all to death, I was amused by the chaotic morning, but I admit it was nice to have them leave for school.