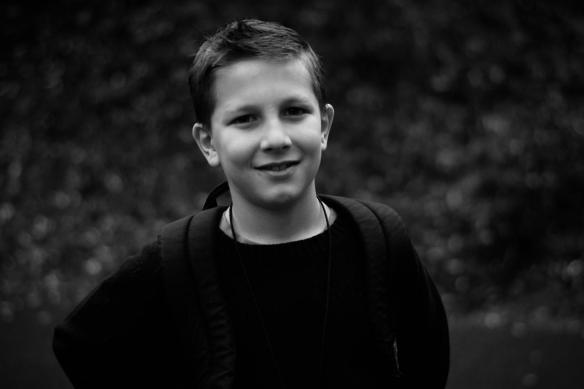 No, it is not his birthday.

Seth will be not be 9 for two more months.

He is lively, bright, active, your- typical- boy -but -maybe- just a notch or two- more hyper.  He is a lot like my brother Nathan was at that age, always moving, always using the furniture as gym equipment.

By the way, let me remind you that he had three staples in his scalp and fractured his collarbone on Halloween?  He’s all better.  We had the trainer at the HS school check him out this weekend and he said he was good to go.  So he had his first wrestling practice last night.  On the way there he confided, “I feel nervous.”  “I think you’re excited,” I answered.  “Yes,” he agreed.

Last week after he got back home from school he put a paper on the counter and came over to me and said in a hesitant voice, “Mom, I have a note from school.”  “Oh no,” I thought.  “What is it, Seth?  Did you get in trouble?”  “Just read it, Mom,” he said sadly.  So I rushed over to the paper, picked it up, and learned that Seth had been awarded the Hall of Fame for good behavior and work in his classes.  So apparently my son is also a good actor because he had me fooled at first.

I squealed and hugged him and gave him a big ol’ kiss on the cheek.  He bounded away, “Mama’s proud of me.” he just knew it.

He got dressed all nice for school.  I had bought him a nice Jcrew sweater from a consignment shop…..I’m dying to find out if it’s still on him for the assembly, which is TODAY.  IN 45 MINUTES!  You see the peek of orange underneath, I bet he’ll be wearing the orange t-shirt for his award.  ?????  I wonder????  It’s happened before with my other sons.  Seth is number 5 so he has to prove to me that I DON’T KNOW ALL THE TRICKS YET!  He’s an original, just like number one (Jacob) number two (Ethan) number three (David) and number four (Caleb).  We are surrounded by brothers.

I’ll let you know if he’s still wearing the sweater.

I noticed, too, that he PUT A NECKLACE ON.  Be still my heart.

This was his favorite photo.

Instead of bouncing off the walls of the house, chattering and laughing and being silly as he waited for the bus, he was having his photo taken on the driveway! 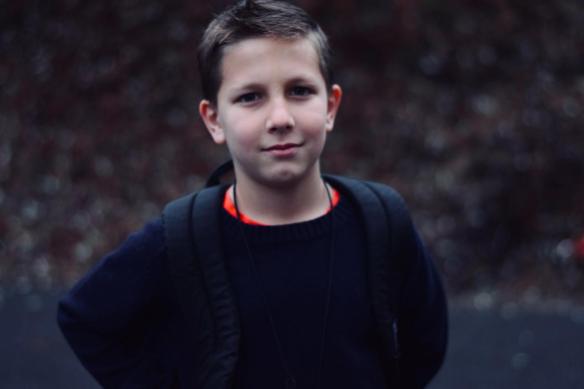 No, not because it is his birthday.

But because……..he is getting awarded for being a good student today at school! 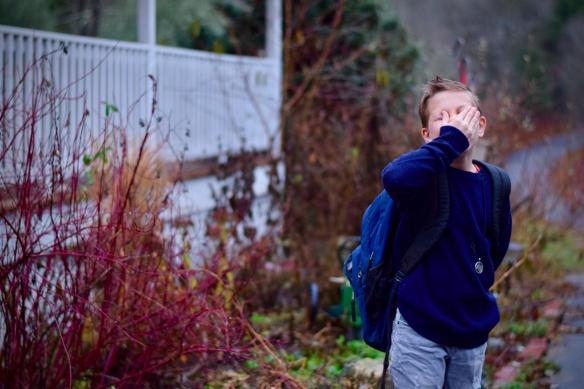 We turned to go into the house and saw……… 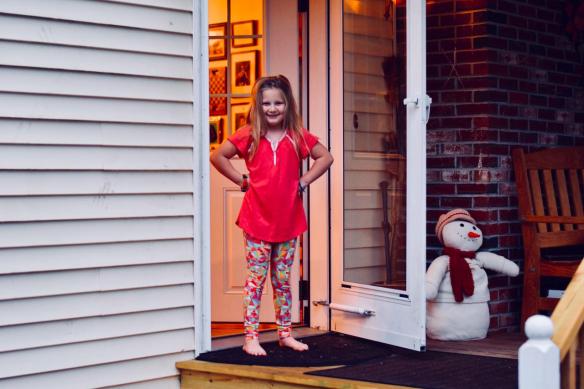 Miss Sarah!  Wearing the same pants she had worn to school the day before.  And needing her hair fixed.  “Oh yes, I have things to do,” I cried.  And sent her back upstairs to “put different pants on!”  Goodness.  Find your socks and shoes and grab the hairbrush.

It’s the 6th day of December.

1 thought on “the fifth son”