I just got home from grocery and Christmas shopping.  I have some wrapping to do before the children start getting home from school but I thought I would do a quick post about our day yesterday.  I thought I would take photos all day long but I didn’t.  I ended up not taking any pictures after the point where Grace and I went to the grocery store to get stuff for lunch.

The morning began with breakfast, and proceeded right into a nerf fight between Caleb and Seth.

There are nerf bullets ev.very.where.

I went outside to take care of the chickens and the rabbits.  The chickens are not laying eggs.  It’s pathetic.  I have to buy eggs.  I think they stopped because of the time change and some of them are molting.

We have rabbits because Jacob agreed to watch someone’s rabbits for them and so far they have not come to get them back.  Apparently she moved in with her sister and there is no place to put them.

They are very cute and the entire family has grown fond of them.  I opened their door so they could hop around the coop while I took care of the hens. 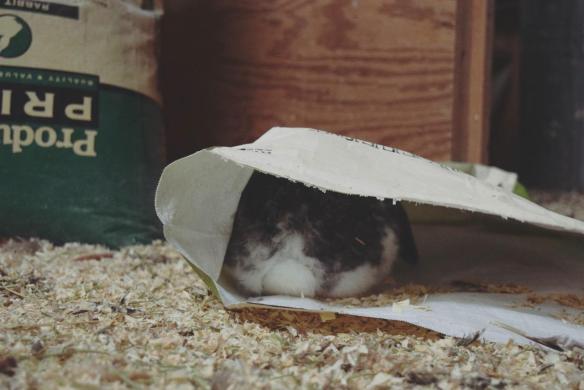 immediately went into a bag. 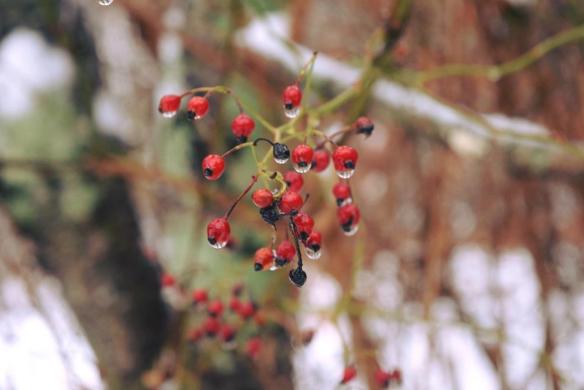 I thought the green background behind these red berries was lovely.

The children had a snow day because the snow had switched over to ice and then rain,  consequently everything was drippy.

Under the trees the snow was dimpling from all the raindrops.

The children went outside for some sledding.  Of course it was rather wet but they still had fun. 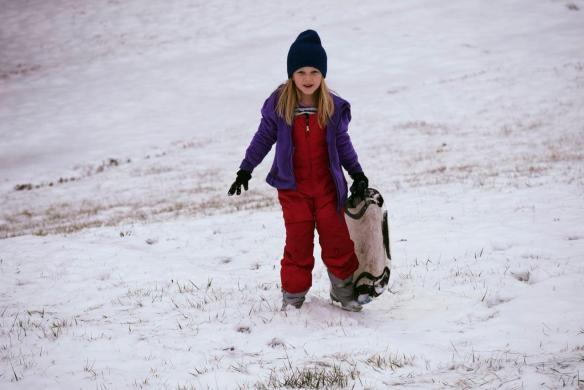 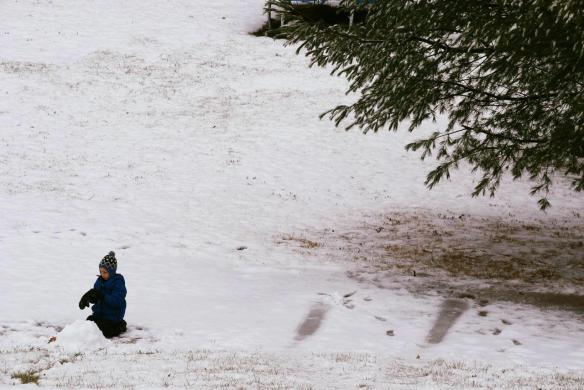 Seth was so little down there making a pile of snow.

And that was that.  Grace and I went to the store, by the time we left Seth was back in the house and he asked to go with us.  We said yes and bought him a big container of tic-tacs which turned into contention when we came home.  Sarah and Caleb wanted them.  Seth poured them all into a fiestware fruit bowl and then cried and cried because Caleb took the plastic container and threw it, causing it to break, and making the tic tacks fly out of the bowl onto the floor.  I sent him downstairs.  So then Seth gave it to Sarah and then a few minutes later decided he wanted it back, she started to cry, he threw it back at her, it hit the wall and broke further.  I sent him downstairs next.  Then Sarah was crying.  Grace taped it up for her.  This all happened because I was nice and bought Seth a treat.  Never again.

Grace and I made a sausage stuffed french bread for lunch.  Then, we prepared dinner, which was marinated meats for mixed grill kabobs–shrimp, chicken, and rib eye.

I gave Grace and David the job of cleaning the storage room and crawl space downstairs and they did a great job together.

We all took naps.

Seth broke one of my Christmas angels.  Broke the wing right off.

We had a relaxing evening and went to bed early, where I read a book until I couldn’t keep my eyes open.

Check out my instagram later for a photo of what I found at Goodwill this morning!!!!

Have a great afternoon, friends!