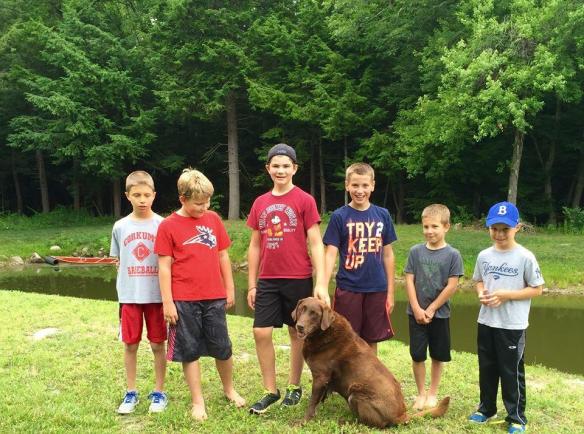 2005 was an eventful year for our family because that was the year I gave birth to offspring number five; a beautiful little son whom we named Caleb James.  Oh how we loved having babies and those sweet days of holding a newborn in our arms.

Caleb been so excited about his birthday (for months) and we were very pleased//relieved that we were able to celebrate it the way he wished; with some of his favorite friends.  They had a nerf gun fight, went for a walk, played football, went swimming, and played video games.

Caleb has the best mother in the world, if I do say so myself, because I made him a homemade snake cake today even though I was exhausted, worried and grumpy (de-stressing from Sarah’s surgery).

Or, even more likely, this is God’s perfect timing because He knew that nothing would cheer me up more than making a snake cake for one of the best boys I know.  It turned out so well I just had to smile………smile at a cute snake.

It’s body was made out of a sour cream chocolate cake, baked it in a bundt pan.  After it cooled, I cut it in half and turned one half to the edge of the other half to make an “S”.

Then I gave it a skin of homemade butter cream frosting, dyed green.

The yellow spots are m-n-ms and skittles, which was a nice surprise for the kids as they never knew which one they would eat next.

The eyes were made with one marshmallow, cut in half and striped with a toothpick dipped in black food coloring (the book said to buy a tube of black frosting but this worked).

Mr. Snake’s tongue was made with a fruit-by-the-foot, trimmed at the end to be forked.

We had to call the boys up out of the pond in order to have the cake, which is why Caleb has a towel around his waist.  (summertime birthdays are the best.)

As an ode to the good ol’ days, I scattered some of Caleb’s beloved Thomas the tank Engine trains down the table as decoration. All the boys had fun picking them up with their forks attaching to the trains’ magnetic ends. 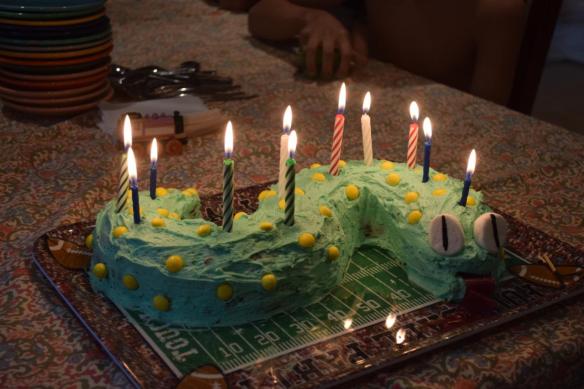 PS, Sarah is continuing to do very well, although I had some cause for worry this morning.  After I talked to the doctor, had a good cry, and baked a cake I felt better.  (She was never worried in the least).  She’s happy.

3 thoughts on “we ate a snake”