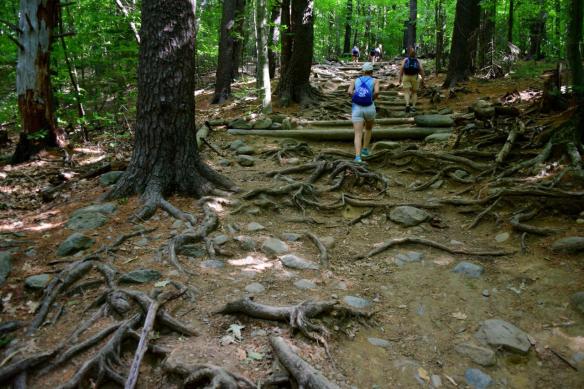 Today has been a blessedly relaxing day after some very fun adventures.  I’ve spent the day slowly puttering around the kitchen, cleaning it up, washing down the island with Method wood cleaner, wiping the granite counters, and washing the glass on the doors.  I’ve done about 6 loads of laundry and also buzzed to the grocery store just to get milk and things for dinner.  We are having corn chip salad tonight, using lettuce from the garden.

Yes, it’s been a quiet sort of day.  I even took a nap on the couch, only waking up *about 17 times because of the children coming in and out of the house slamming the door each time*. 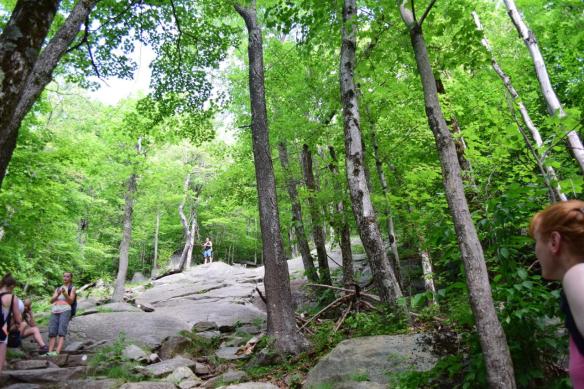 Something wonderful has happened to me.  There has always been a deep down hankering to walk and hike and I’ve finally met a friend to give me that extra push and camaraderie to do it.  Amy, (Ethan’s girlfriend’s mom) is an experienced mountain climber, ice climber, and hiker.  She and her family are also our neighbors, and since our kids (obviously) get along so well, she and I have also been visiting and getting to know each other, too.

When school was finishing up for the year, I mentioned to Amy that we should plan a hike together.  We ended up deciding on Mount Monadnock in New Hampshire.  Amy went to college near the mountain and had hiked it many times.

Mount Monadnock is known as one of the most hiked mountains in the world and was admired and visited in the past by such well known men as Ralph Waldo Emerson and Henry David Thoreau.  (both of whom I love to quote here on my blog).

Amy and I took along our teenagers.  She brought her daughters and niece and I brought David, Ethan, and Grace.  (Thank you Michael P for babysitting my youngsters so I could go on this trip.)  We were able to take one vehicle — I drove there and she drove back.  Everyone in our party each carried their own bag with water and food and we all put sun screen and bug spray on before our ascent up the mountain.

We followed the white dot trail up, which is 2.2 miles.  It is the shortest but steepest trail up the mountain and indeed, about half way up I made up my mind to quit.  My heart was thudding, I felt sick, my legs were giving out, I was shaking, and I simply decided I could not do it.  The kids kept going while Amy stood by me wondering what to do….I begged her to go, trying to hold in the sobs, and told her I would text her and keep in touch so she knew I was okay.  So after much begging on my part, she went to catch up with the kids.

I leaned back on a tree and propped my feet up on another tree and slowly drank water.  I ate a Cliff bar and rested.  I saw several other people hike past me, one of which was an overweight shirtless man.  I thought “good grief, if he can do this I should be able to as well.”  After 10 minutes or so, I turned back to look up the trail again just in time to see Amy returning.  Alas, I had forgotten that I had let David use my phone to take a photo and when she texted me “Are you okay?” and didn’t get a reply, she was worried and came back. “I couldn’t leave you!  You just don’t leave people behind on a trail.”  It was quite touching to have her come back to me, actually I had tears in my eyes at times thinking about it.

I told her I thought I would be okay to continue since I had rested, so happily we set off again.

The trail was nothing but rocks.  I mean, I have to laugh now.

In fact, this mountain keeps returning to my thoughts over and over.  I think I fell in love. 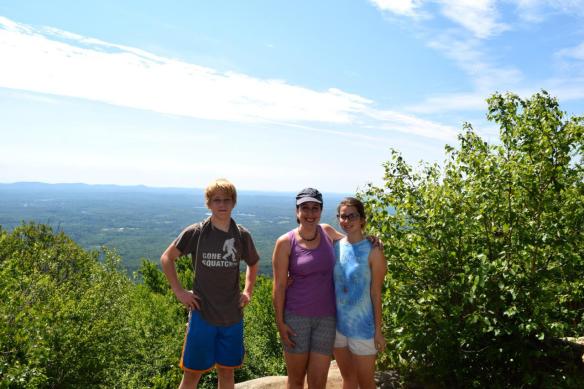 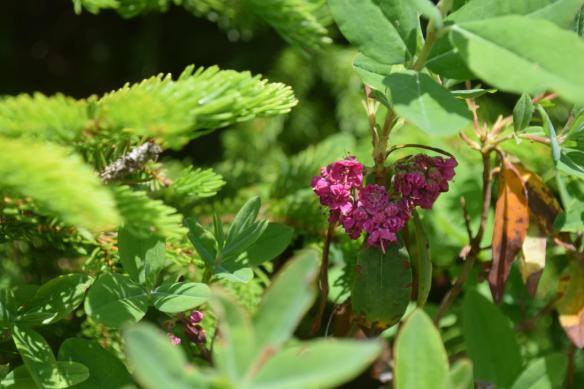 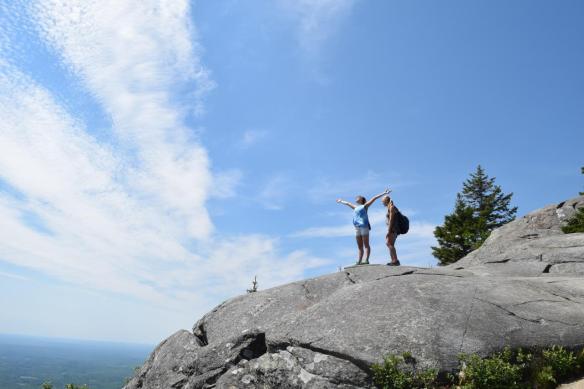 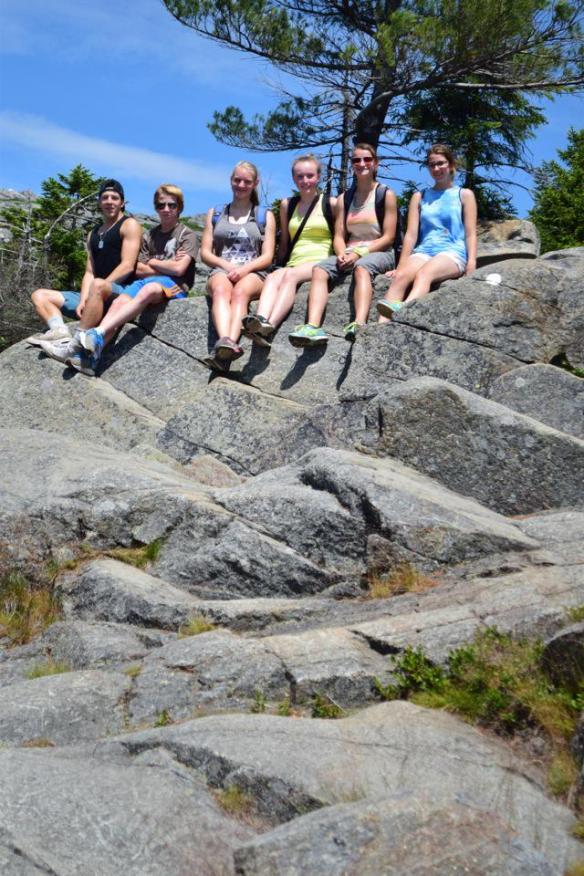 Amy and I were both so proud of these kids.  They were happy and enjoyed the hike, which meant we were happy, too.

“Look to the north where Grand Monadnock’s height
Enchains the fancy, and rewards the sight;
Such rock-ribb’d hills our own New-England gave
To mould her sons as rugged and as brave.
Ancient Monadnock! Silent pine-girt hill,
Whose majesty could move a Whittier’s quill;
Whose distant brow the humbler pen excites;
Whose purpled slope the raptur’d gaze invites;
Stand thou! Great Sentinel, though nations fall –
In thee New-England triumphs over all!”

If you squint and look at the middle of the photo, you can see the little lovebirds, Ethan and Tessa.

The children were most often ahead of their Mothers. 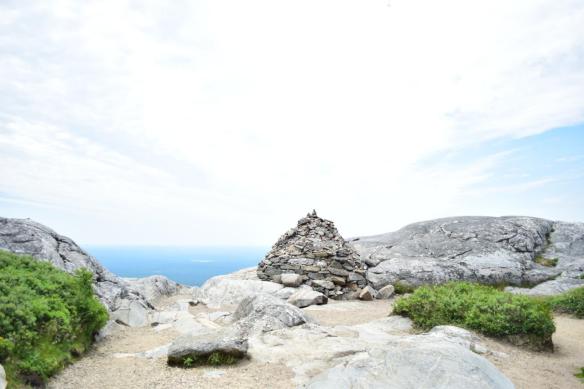 And then in the midst of the Hallelujah chorus playing in my mind, we arrived at the very top!  It was windy and there were lots of people there already.  We sat and ate some food and then enjoyed the 3165′ elevation and 360 degree views.

David was the best mountain climber among us….hopping and leaping up and down very nimbly.  He smiled a lot.  Rather than slowing him down, hiking seemed to give him more energy.  However, he did fall asleep on the way back home.

mother/daughter love on the mountain tops 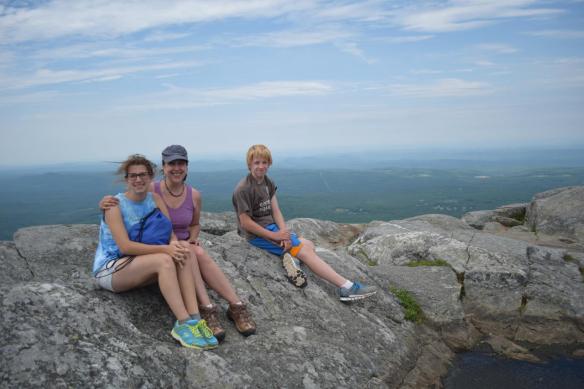 ((so windy!)) but we were very joyful to be up high breathing in all the fresh air and soaking up the majesty of God’s country.  Grace was even amazed to find our old familiar friends *toad tadpoles* in a pool of water. 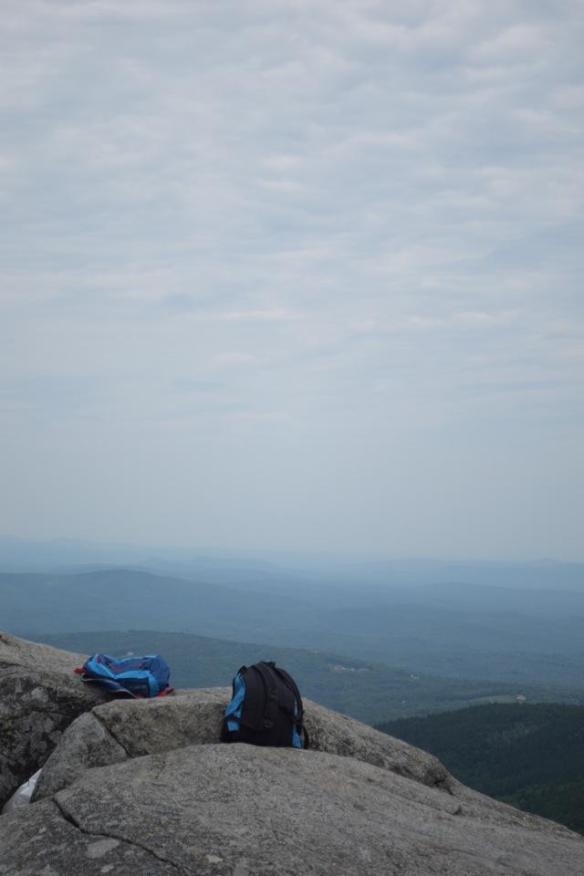 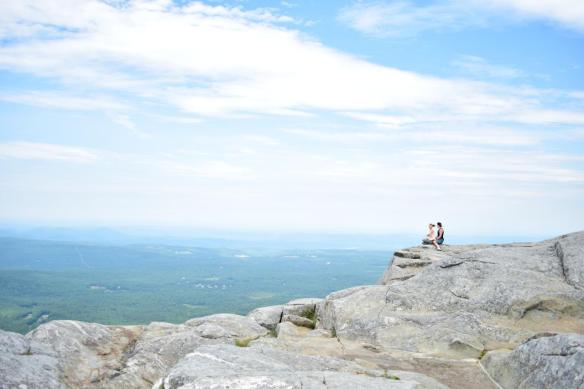 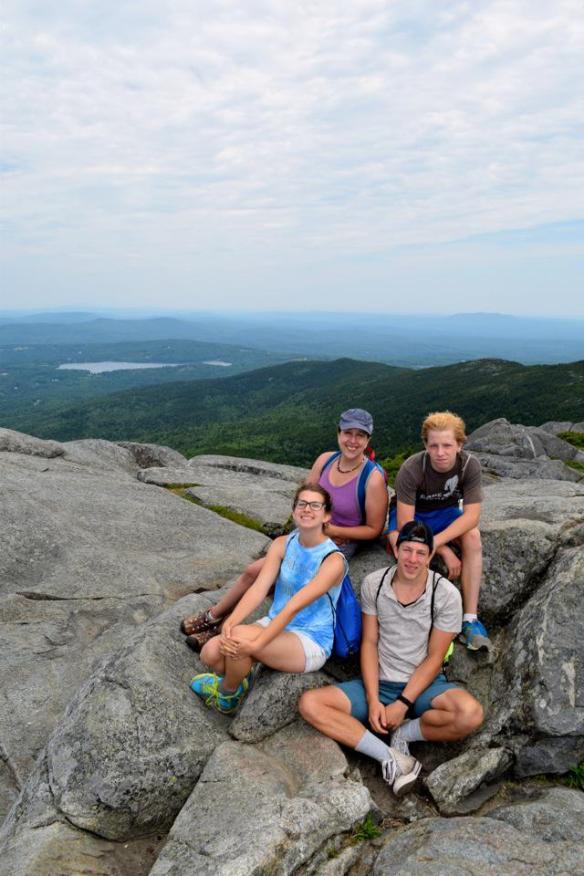 The trail back down was (white cross trail) just as difficult as the trail going up.  By the time we reached the bottom, our knees were rather shaky.

The feeling of accomplishment was incredible.

The soreness of my muscles even today is also incredible.

As soon as we left the mountain, we headed straight for a refreshing ice cream place right there in Jaffrey, NH.