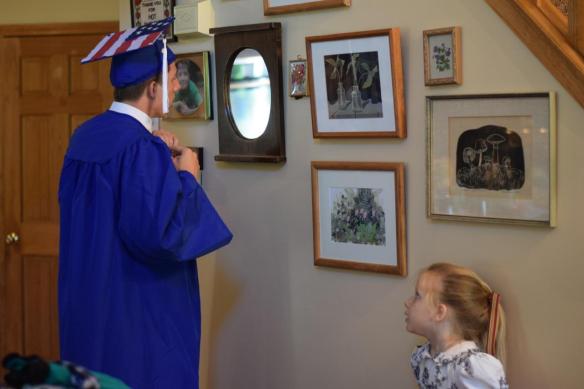 Rich and I sat on the left hand side on bleachers with Caleb, Seth, Sarah, David, Tessa, Emily, Grace, and Jacob.  We were thankful to have enough tickets for the whole family to watch Ethan graduate but I doubt the little kids were thankful because it was a long and pretty boring night for them.

Zach is Ethan’s red headed best friend.  They were even in the same Kindergarten class. 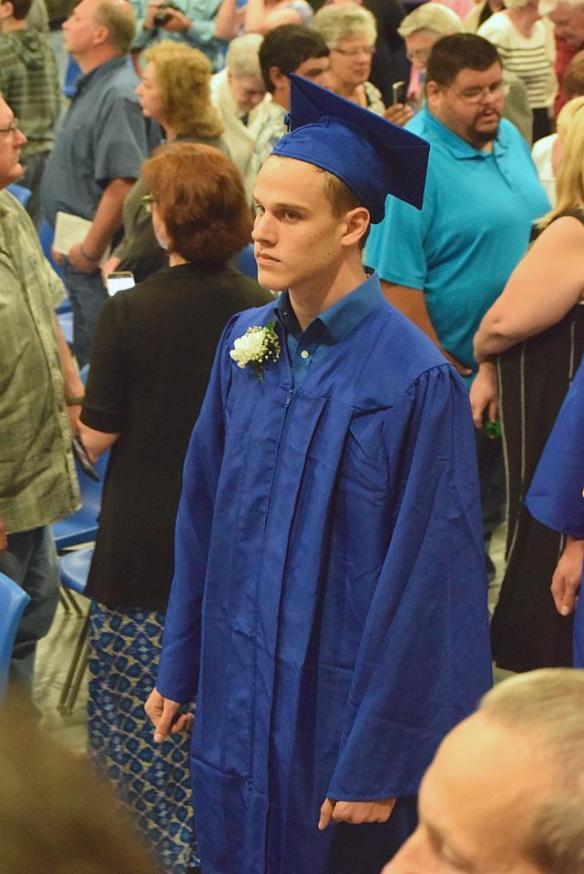 Caleb is also one of Ethan’s best friends.  They were friends for years before he and Grace started dating.  He looks pretty serious in picture but then we yelled his name and he smiled.

*Zach receiving his diploma. (He is attending college this fall).

The graduation began at 7pm and went on for approximately two hours while we were sitting squeezed together on the bleachers.  It was kinda funny.  Rich was uncomfortable the entire time…too hot and the bleachers were too hard and his hip was hurting and then Sarah got on his lap and the face he made as she explained she had to sit there because she was “too squished” was so funny…….

David and Caleb coped by reading books.  Aren’t they so handsome???

We sat right behind the family of the Valedictorian which was exciting (to me).  His speech was very well done.

Caleb receiving his diploma (he is going into the Coast Guard this summer). 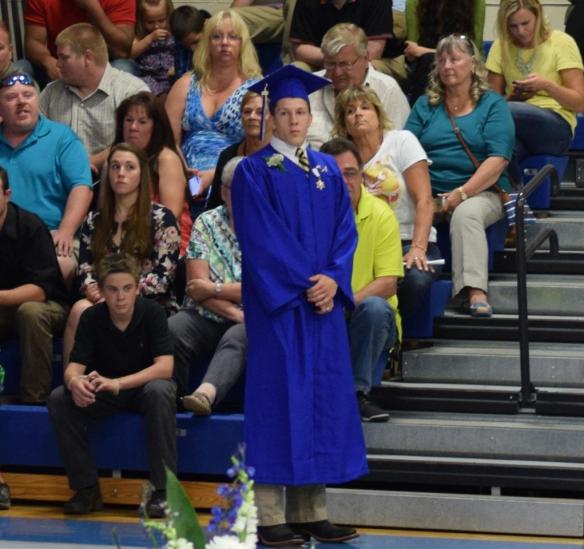 Ethan waiting for his turn to get his diploma and my heart was bursting.  He wore cowboy boots and decorated his cap with the American Flag.  (one of the girls did the very same thing, boots and flag).  Very fun. 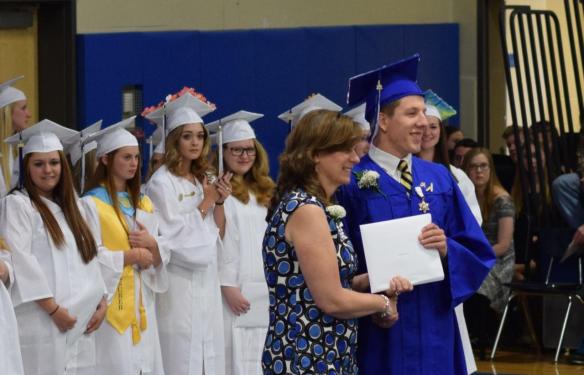 I stood up with my camera to take pictures while Rich and the kids all cheered as loudly as they could for our E. 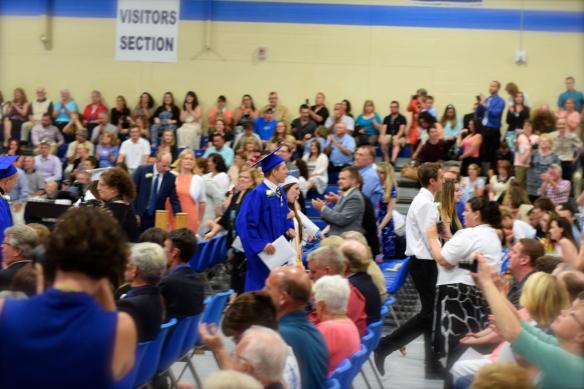 This is one of my favorites of the night…Ethan clearly in the middle of the photo leaving the room with a classmate on his arm.  The kids were all so happy.

I managed to get through the crowd in my very high horrible heels and found Ethan drinking chocolate milk at the reception.

We got a phone call from the school this morning saying they had Ethan’s class ring in the office (he didn’t even know he had lost it). 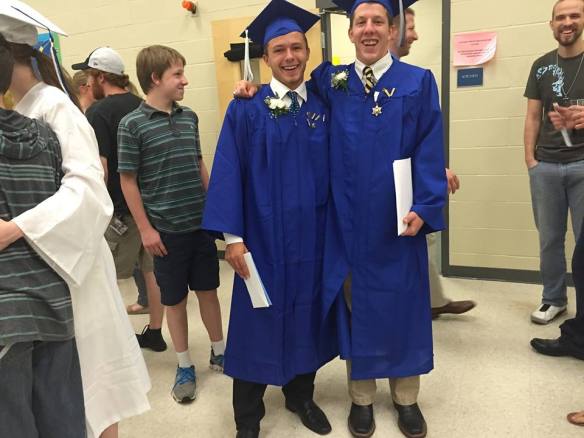 My daughter Grace with her boyfriend, Caleb.

Ethan with his girlfriend, Tessa. 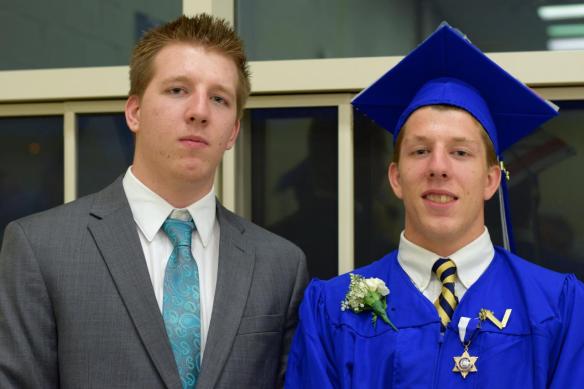 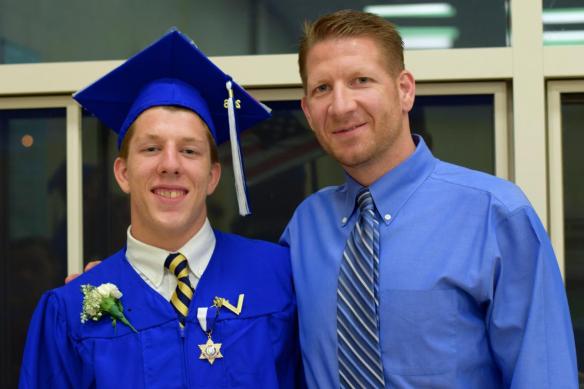 Ethan and his Dad

Ethan and his Mom.

Ethan and all of us.

(Incidentally, earlier that evening while we were still home, Grace got Sarah ready while I was getting ready and we ended up all three matching.  The next day the same thing happened, we all three ended up wearing yellow shirts without even planning it.)

Ethan and his little sister, Sarah Joy.  Sarah is wearing a dress that used to be Grace’s.

All in all it was a very exciting night.  We left as soon as we could.  My feet were killing me and Ethan went to a party that the school arranged through “Safe Grad”.  He stayed up all night and slept until 11 in the morning the next day.

I didn’t cry or even feel like crying.  But I had a headache and was buzzing with emotion regardless.  My mind could only hold the essentials; “Ethan” and “Graduation” and “taking photos”.  I was so embarrassed because I met a man and his wife in line before the graduation…we introduced each other and everything….by the end of the night I introduced myself to them AGAIN.  And the lady said, “Whatever you are drinking, I’ll have some, too.”  Which was rather rude but it just goes to show that I was in tune to my boy and my boy only.

Today is the first day of summer vacation.  It is sunny but oddly windy.  Caleb and Seth were invited to a friend’s house for a morning of play.  I drove them there and then took the girls with me to the thrift shop where we spent three dollars on an aquarium (for nature studies at home) and a bag of books (for summer reading).  Also today:  David made homemade funnel cakes fried in oil (Aunt Colleen’s recipe), I made a double batch of blueberry muffins, Jacob and Emily took Sarah for a canoe ride on the pond and they threw bread to the fish.  I saw a pair of cardinals and ate three wild strawberries.  David had stomach ache by this afternoon so he is taking his second bath (he thinks maybe he ate too many funnel cakes but refused Pepto Bismal).  Ethan is at his girlfriend’s house, Grace is at Caleb’s house, Jacob is at work, Emily is also at work, and the three youngest are now watching Zootopia after begging me all day.

Oh my word, I am in my room typing this and I could hear the dog whining at the door to the house but I didn’t think anything of it and guess who just came in, and it’s only 4pm!!!

1 thought on “my boy and my boy only”