Good morning, dear friends and relations, it is a beautiful fall day.  The official first day of winter is in one week and it currently does not feel a bit like winter.  Caleb, my precious soft hearted boy, had tears in his eyes this morning as he looked at the weather report for the days leading up to Christmas.  NO SNOW.  He said he prayed about it, too.  He wonders if we will have ANY snow AT ALL this winter.  It’s so important to him that it makes me long for snow, too.  What a happy boy I will have on that day.

I went down to the chicken coop to let out the hens and give them a bowl of leftovers.  I collected three eggs and stood at the pond to look at the beauty around me as I prayed a good morning prayer to God, asking him to send down his blessings on this old world, thanking Him for all He enables us to do each day….learn, grow, think, laugh, praise, heal, feel, work, BE…new creations.  The old has passed away and the new has come like a miracle.  Every good thing comes from above and our thankful hearts please Him.

The birds are happy, too.  I have a feeder by the porch which brings in the songbirds.  They sit in the bushes by the house and take turns flying over to select a seed.

I opened windows and turned on the house fan for some fresh air.  Later on I will go the post office to get a Christmas card weighed because I bought a pack that require extra postage, but how much extra?  I need to figure it out and get to work writing my cards, which I do so love to do, sending out mail is a pleasure.  Receiving it is, too!

How about one last post featuring dear Hannah?  Oh, we had a lovely visit, doing so many simple sweet things together like sing and play piano, put together puzzles, watch TV, go for walks, and……..WORK IN THE KITCHEN.  How fun it is to work side by side with another woman in the kitchen!  Four hands are better than two.  And we were blessed with two little helpers….eight hands ready to work in the busy kitchen. 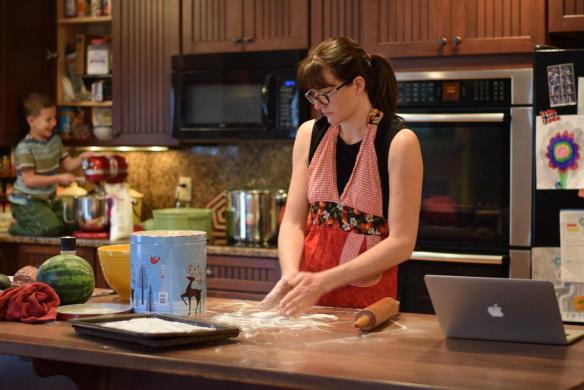 While Hannah set to work making her famous chicken noodle soup with homemade noodles, I began a batch of Christmas cookies….Russian tea cakes.  I only regret that I didn’t think of sending a box home with her because they are a very sturdy and delicious cookie indeed, able to survive a trip to Alaska. 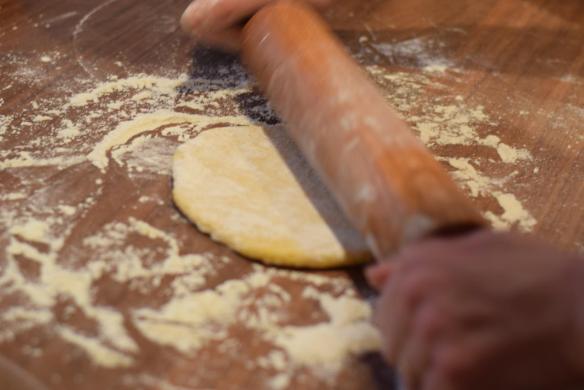 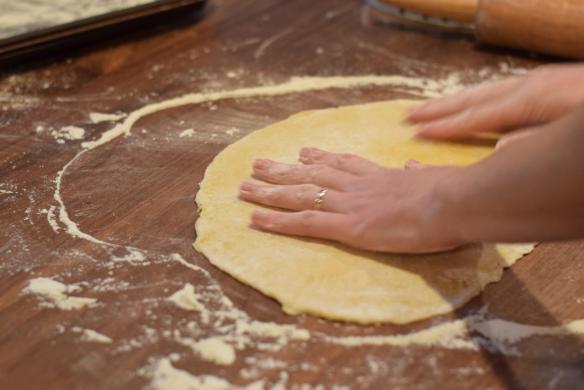 She rolled the dough as thin as possible and then cut the noodles on a cutting board. 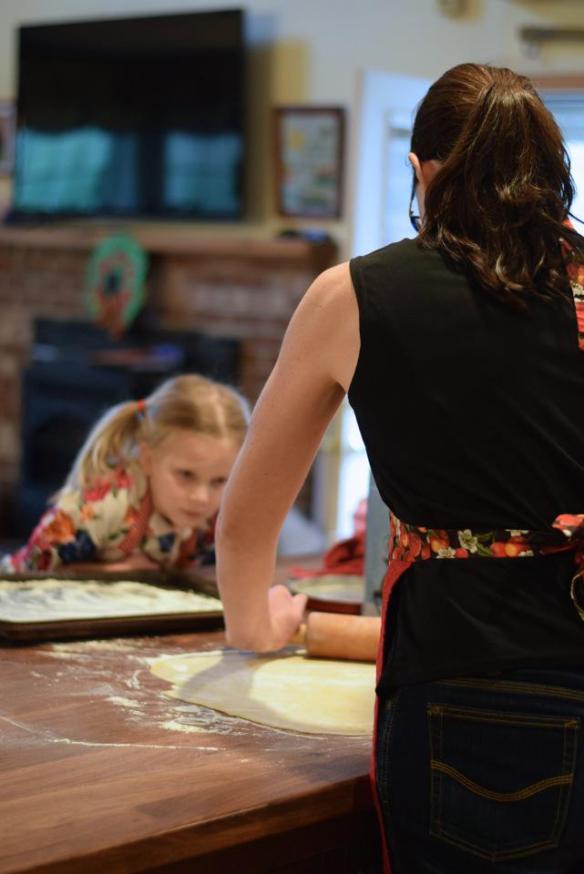 Then, she sprinkled them on a floured cookie sheet to dry for a little while.

I put Seth and Sarah to work rolling balls of cookie dough.  “Is this one too big Mom?” she asked.  “Yes, a little.”  “Okay,” she said as she solved the problem by taking a chunk off to put it in her mouth. 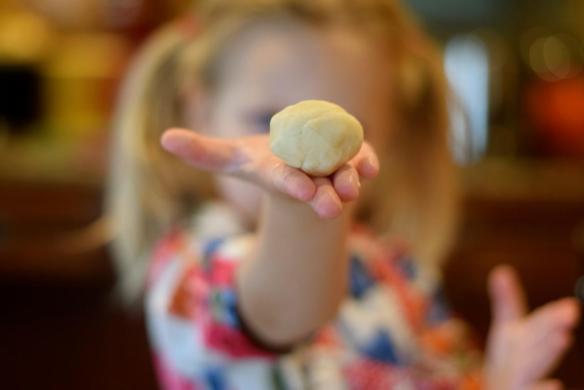 sweet happy Hannah.  In this picture you can see the paper Angel garland over the entry to the dining room.  Hannah bought one for her house, too.  Isn’t it pretty?

The noodles are all cut out and waiting to be placed in hot flavorful chicken broth.

The cookies are done and powdered sugar (which Sarah called flour over and over regardless of my corrections) was everywhere — reminding us of Caleb’s elusive snow.

I left Hannah briefly in order to pick up my teenagers from High School and take a few of their friends home.  When we returned, dinner was done.  She made fresh and creamy mashed potatoes for us to pour the soup over.  Every bit of this meal was homemade and it was so delicious that even though I was filled up by my first helping, I knew it would be a crime not to enjoy a second helping.  So I did. 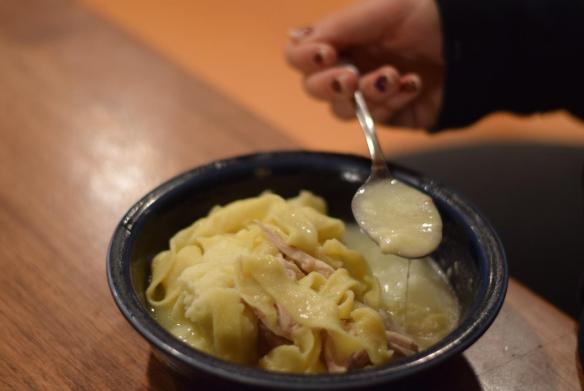 And it was just what Grace needed to recover from a long long day of school.

But that wasn’t the end of Hannah’s work in the kitchen that night.  As soon as she was done with the chicken, she began a batch of overnight cinnamon rolls. 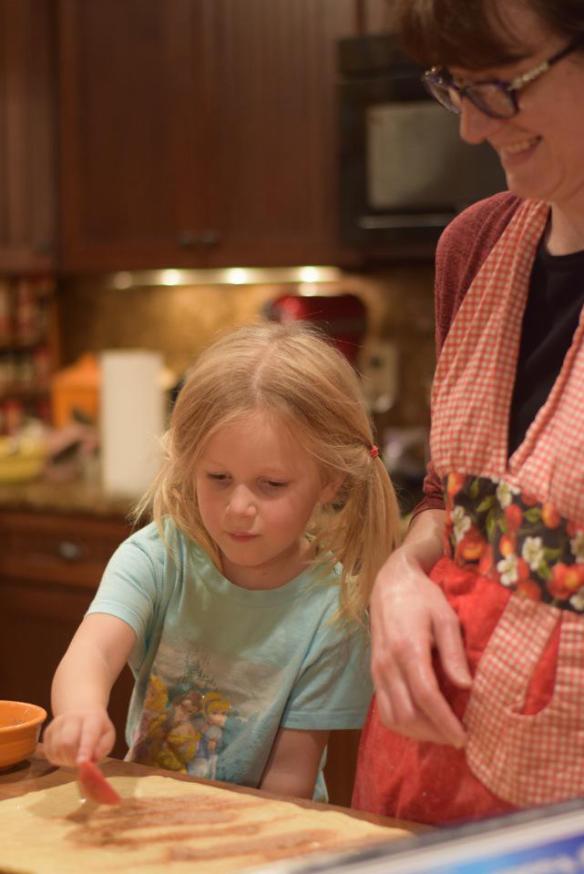 ((By the way, Hannah was wearing an apron that she made for me years ago.))

THE NEXT MORNING……Sarah eagerly watched the cinnamon rolls bake in the oven at 350 degrees.

The cinnamon rolls were blanketed with cream cheese frosting. 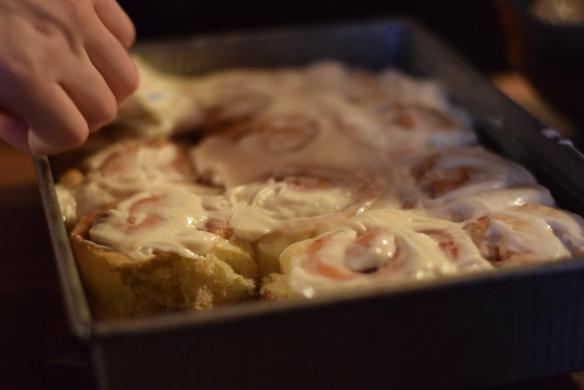 Once again, I helped myself to several cinnamon rolls too many just for the sake of taking advantage of the freshness, the homemadeness, and the lovingness of Hannah’s baking.  Although she mourned what she considered *a shade too brown of a bottom*, let me assure you THEY WERE PERFECTION.

After our cinnamon roll breakfast, we took David, Caleb, Seth, and Sarah to the movies.  But before we did, we attempted a “frameworthy” photo of the two of us.  Forever friends. 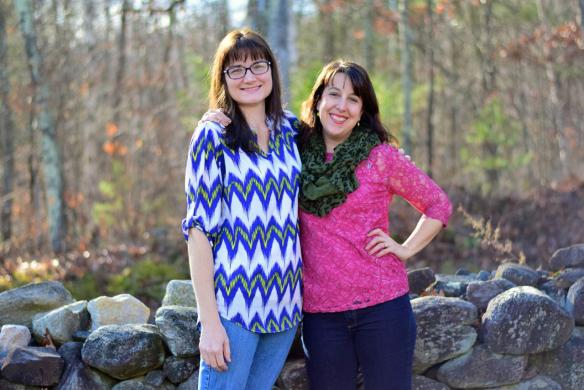 That night, Hannah helped us decorate our Christmas tree.  Tomorrow I will share the family photos she took of Rich and I with the kids.  But this next one was one that I had Grace take of the two of us holding books that we bonded over.  I first believed Hannah was a possible kindred spirit because she mentioned on her old xanga blog that she was reading the James Herriot books which I absolutely LOVE.  Then, later on, once we became pen pals and got to know each other better, we read several LM Montgomery books together, including Pat of Silver Bush.

“A friend is someone who knows the song in your heart, and can sing it back to you when you have forgotten the words.”

“True friends are always together in spirit”  LM Montgomery