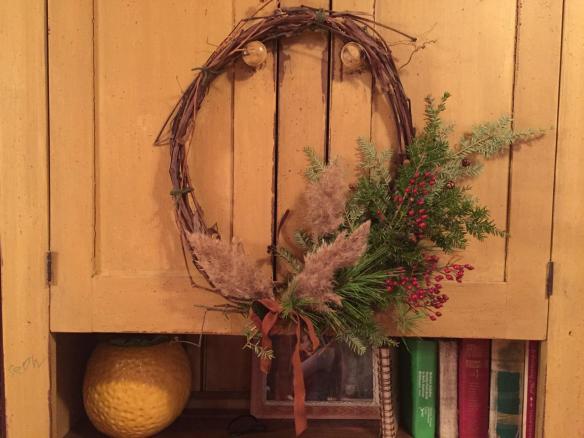 I made this wreath!  About a month ago I went for a walk in the woods and came across a convenient grape vine to pull down.  It was thin and pliable, not like the ones that grow so thick that the only part I can reach is as big around as a small tree with the rest of the vine grown far up into the tree tops.  I pulled the little grapevine down and wound it up into a circle the best I could.  And there it hang, back at home, outside on a nail for a month until I got ” a round tuit”, which was Saturday afternoon.  I went outside with scissors and cut some evergreens (some still had tiny pinecones on them) and wild berries.  I already had the dry grass (the tops look and feel as soft as down) in the house –I picked it from the side of the beaver pond.  I used forest green yarn to tie everything together and a brown ribbon on the bottom, tied in a bow.  I’m way too proud of it. 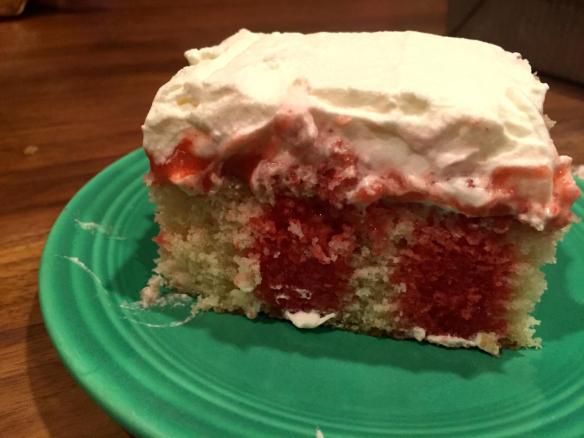 I also made a jello cake from my new favorite cookbook.  It was amazing.  In fact…… 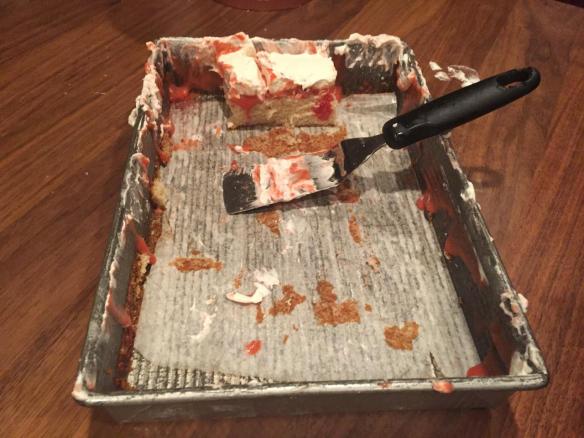 As soon as it was done, we ate it all.  (after I took the picture, Ethan ate the last piece). 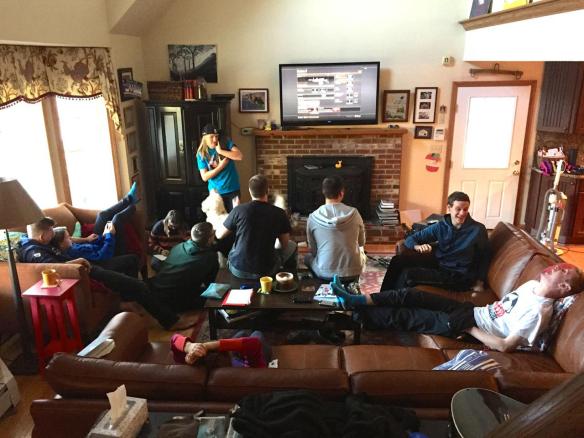 It wasn’t hard to eat it all in one go because we had a house FULL.  In this picture there are 10 teenagers, 2 big dogs, and a small gray cat.  There are two kids not in the picture, plus Rich and I. 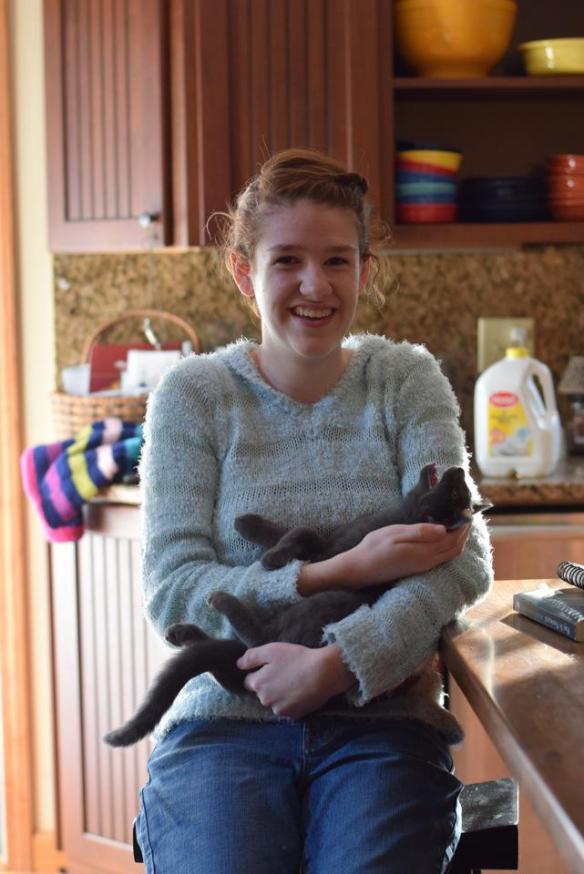 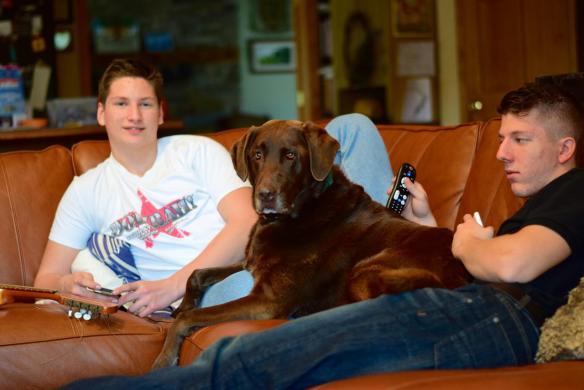 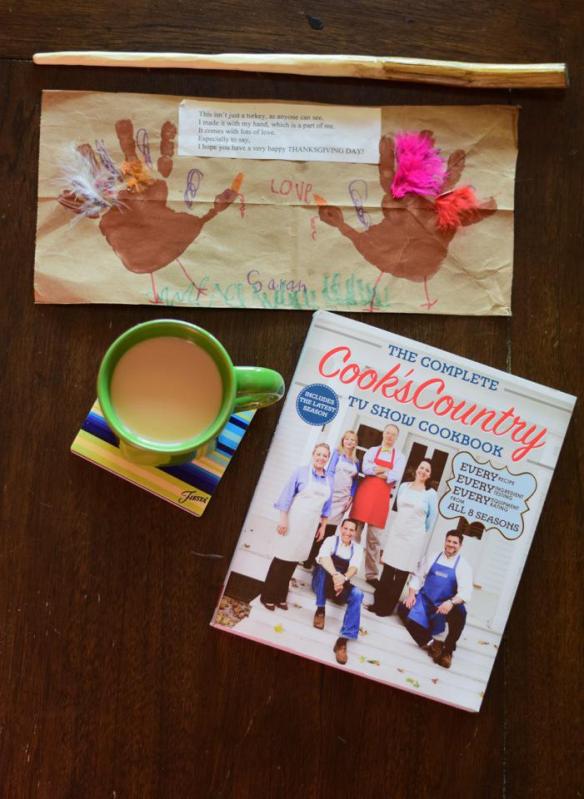 David made a Harry Potter wand all by himself out of a small tree he cut down in the woods.  Then he carved it up and shellacked it.  Sarah made turkeys out of her handprints.  The Cook’s County cookbook is the one I got the jello cake from.  Today I’m making a raspberry chiffon pie! 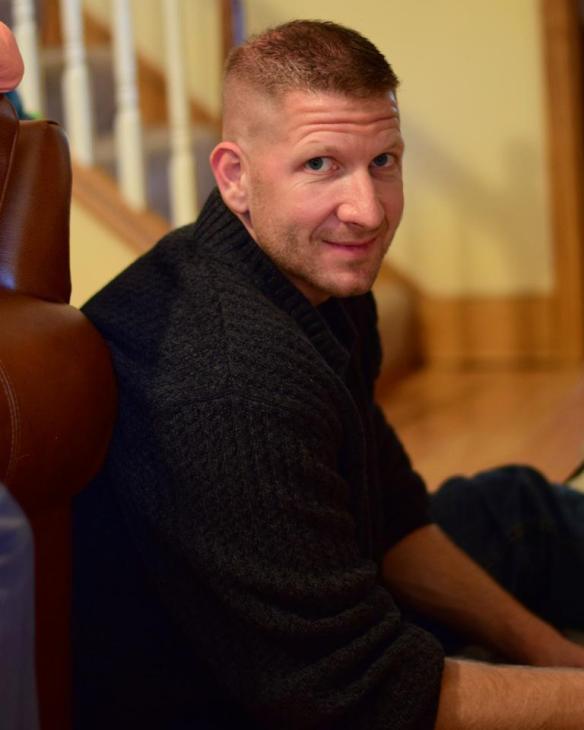 But mainly this post is about the love of my life-Richard Charles-who was gone all last week but is now home again and the part of my heart that needs *my husband around all the time* is at peace.  From Monday-Wednesday he was in TX for work and then Thurs-through Saturday afternoon he was finishing up his coaching medical class that he was able to take so he can be the head coach for wrestling at our local HS this year.  He was the assistant last year.  He is going to LOVE coaching….he can’t wait to get started.

Well, I made him a nice “honey-do” list yesterday afternoon when he started hinting at going out for a run (which takes hours)…and he got right to work.  So I thought I would show you some of the other little things we have done around the house lately…….. 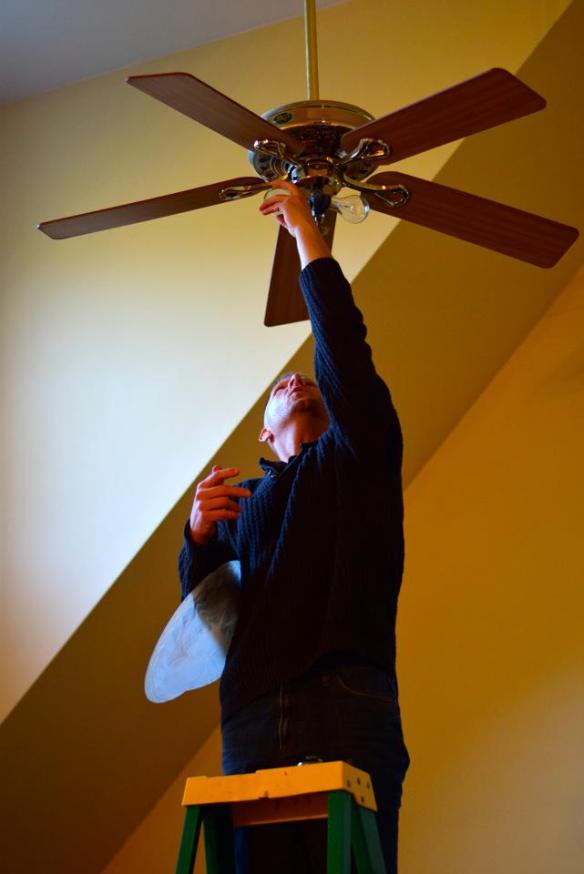 He put fresh lightbulbs in the ceiling fan on our cathedral ceiling. 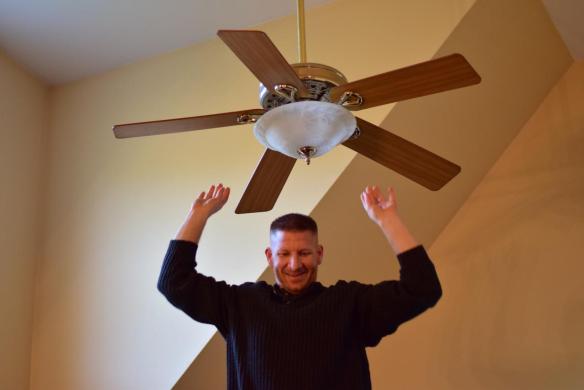 While the ladder was out, Seth and Sarah decided to climb it. 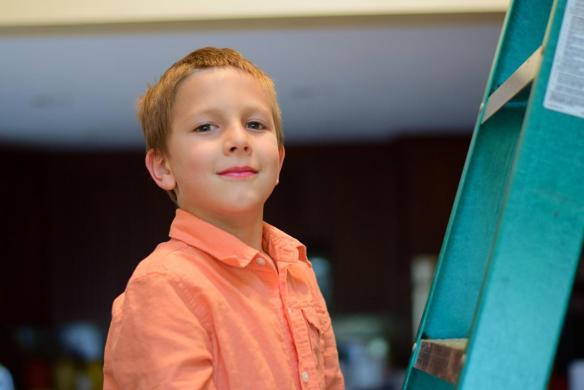 (by the way, Seth trimmed his own bangs…he’s such a helpful child!) 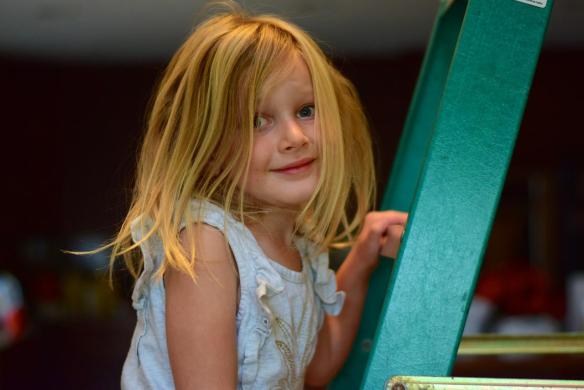 Turns out Sarah is afraid of heights.  I say this because she was only about two feet off the ground and beginning to shake like a leaf. 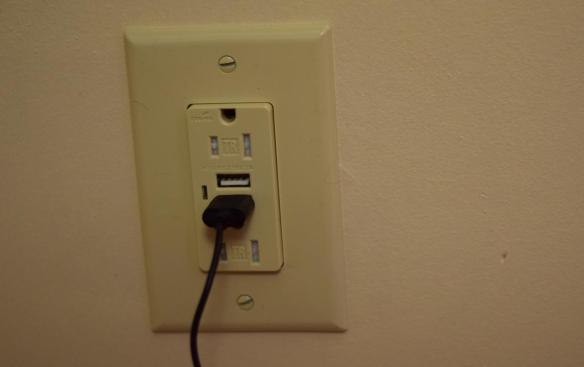 He changed out this outlet.  It used to be a plain old outlet but it was loose in the wall and nothing would stay plugged into it, the cords would just fall out.  It’s an important outlet because it’s on the wall at the end of the couch and we like to plug in the electric blanket and phones there.  Consequently, while he was at it, he bought an outlet that has two slots for phone chargers, too.  Very convenient.  It’s amazing how such a small change can lift one’s spirits. 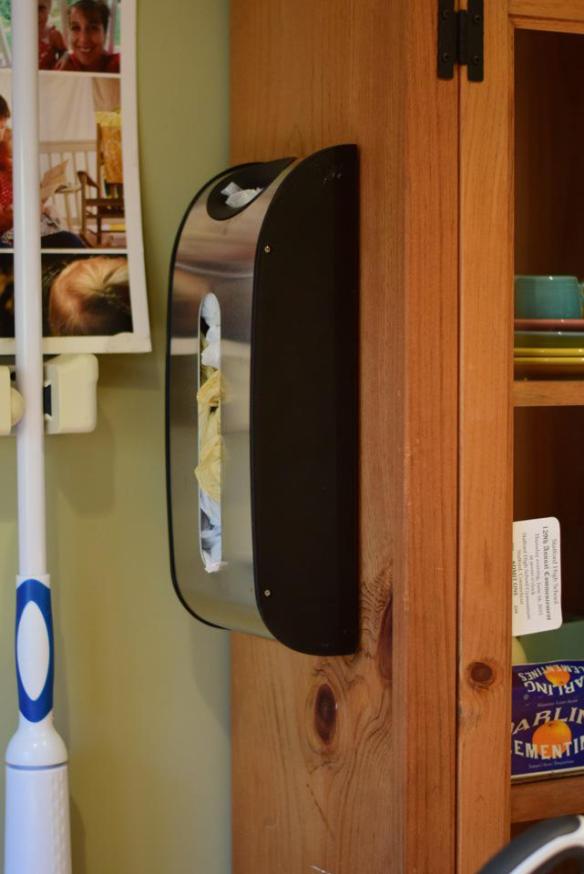 I bought this plastic bag holder  a few months ago.  It came with sticky strips on the top and bottom but the thing would NOT stay on the wall using just the strips.  So it had to be put away until  yesterday when I got Rich to hang it back up, using screws.  (in the pantry) 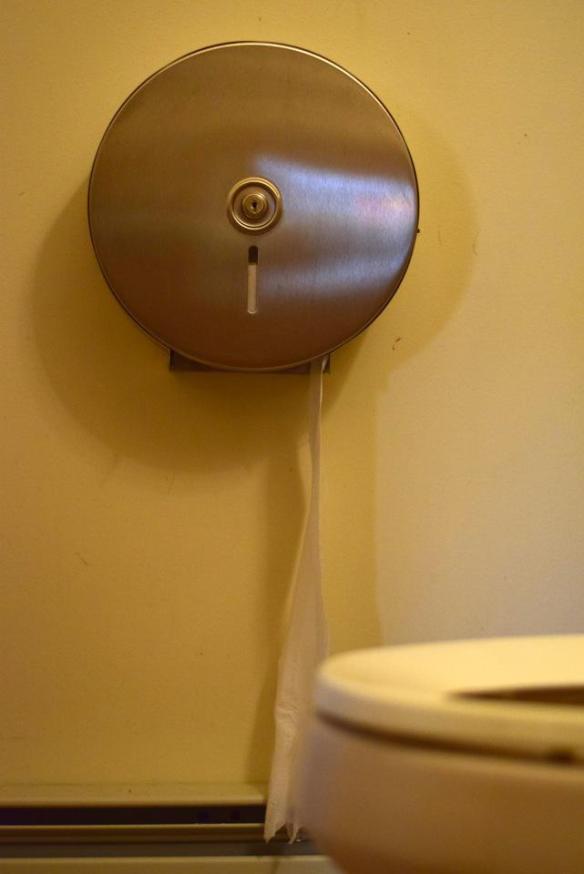 This is our toilet paper dispenser.  Rich actually hung these up a few weeks ago.  We bought one for each the downstairs and upstairs bathrooms because the bathrooms are used so much that we were going through rolls and rolls of toilet paper and the rolls were all over the place.  I love this dispenser because it’s clean, it’s locked, and it holds a large roll of paper.  Half the kids thought it looked too “public bathroom” but I just don’t care…..I can’t tell you how many toilet paper holders have fallen off the walls, it’s nice to know this is here to stay.  Michael says they were hung too low but he’s over 6 feet tall and we were thinking of our small kids at the time…… 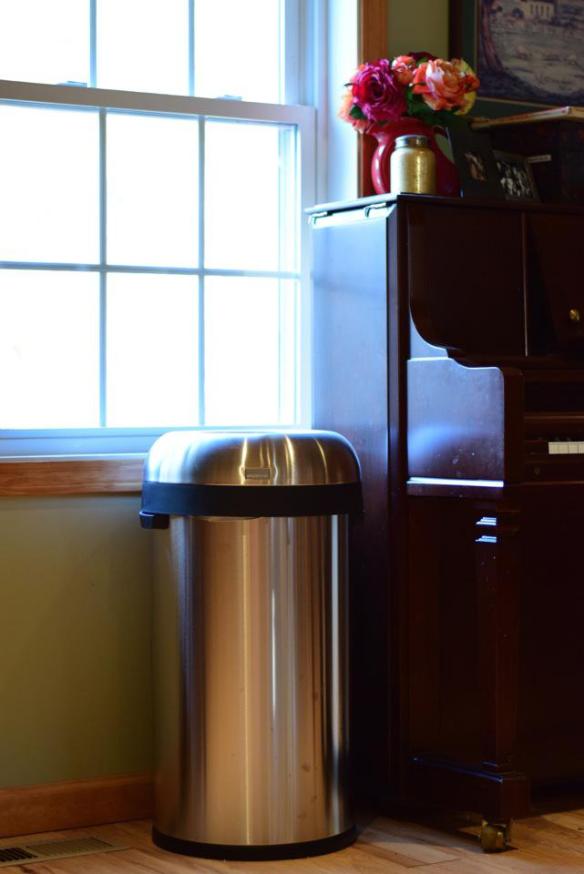 I love my new garbage can.  We needed one for our dining room and this one is beautiful.  It also has an open top (flip lids are an extra step) to “make baskets” into.  Sarah can look right inside the top and see her papers from school that I throw away.  Then she can get them right back out again. 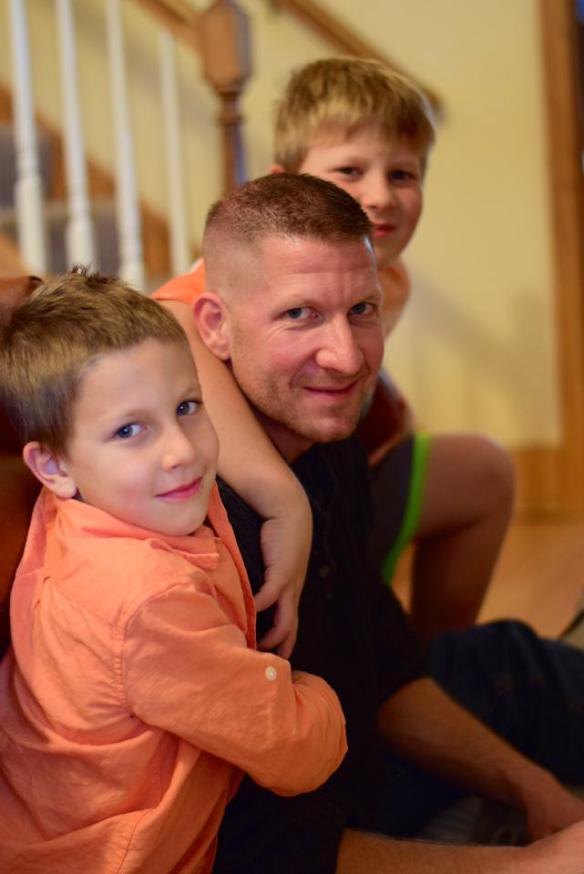 Well, that’s about it as far as small home improvements.  Rich also rehung the towel rack in our bathroom but I didn’t take a picture of that……(small mercies, right?) 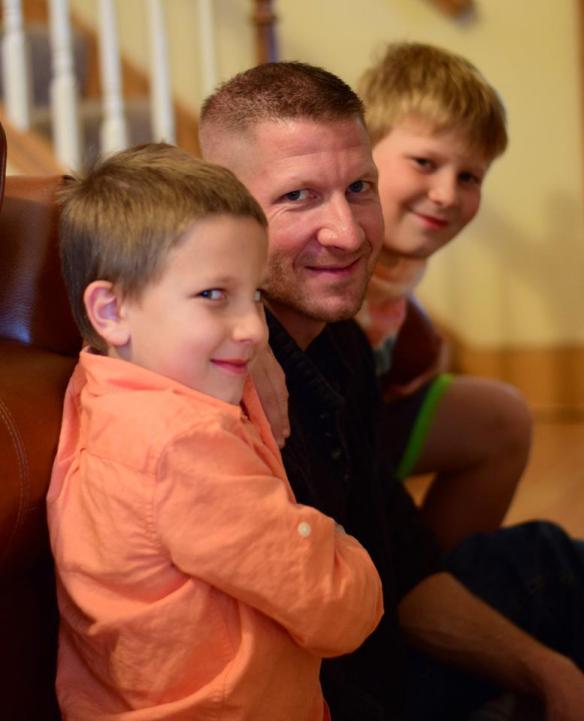 These two little boys were stuck to their dad like glue yesterday watching everything he did and talking to him about football.  It was precious to see.

“The small things of life were often so much bigger than the great things . . . the trivial pleasures like cooking, one’s home, little poems especially sad ones, solitary walks, funny things seen and overheard.”  Barbara Pym