Grace had a birthday yesterday.  She turned 15 and woke up early to hug her Dad before he went to work.  None of the children had school yesterday which was a treat for her….to have the day to celebrate.   Just after 9a.m. her big brothers finally woke up and she could open her stack of gifts that Seth and Sarah had helped me wrap.

She received a candle, three fabric mesh bags for treasures, a book on nail polish styles, socks, a sketch pad, an art book, and a necklace. 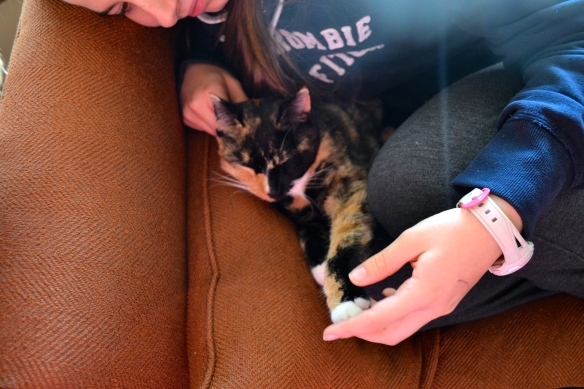 Then we sat around trying to figure out what to do.  She wanted me to take her shopping so we decided Jacob and Ethan would stay home with Seth, David, and Caleb.  Grace and I took Sarah and picked up Aunt Cassandra on the way to the mall.  It was a beautiful day.  After our day of ice we had a day of 65 degrees.  Grace sketched in her new sketch pad and played tunes for us, as we drove along.

We ate a nice lunch at California Pizza Kitchen.

Sarah needed to use the bathroom and I surprised Grace by asking her (even though it was her birthday) to take her little sister to the restroom.  While she was gone I took the opportunity to flag down our waiter (whom Grace was in love with) and order her a piece of chocolate cake for her birthday.  The girlies came back and after a while, Grace was surprised with a piece of heavenly cake with ice cream on top, placed in front of her by the charming waiter. 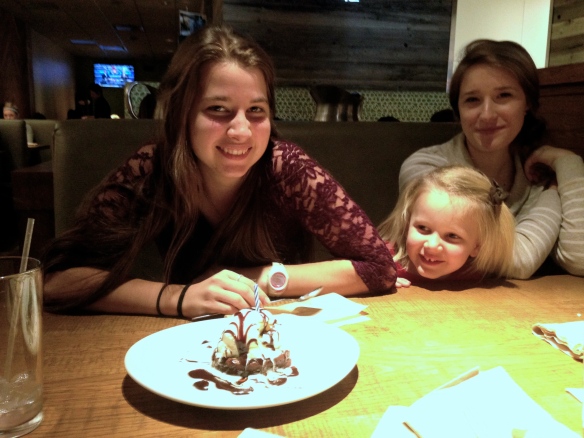 When it was just the four of us again she asked, “How did he know it was my birthday?  Did you tell him or did he overhear something?”

There were four long handled spoons so we could share and it was DIVINE.  Cassandra only had one bite because she has been overindulging in leftover Halloween candy.

Grace bought herself a new ring and a belt with her birthday money and Aunt Cassandra bought her some thick comfy socks from GAP (Grace has a thing for nice socks).

We left the mall way too soon because the boys needed to be taken to practice and Grace needed to go to Drama rehearsal.  Before we left the house for practices, I took a few “Look Who’s Fifteen Now” pictures to document her special day. 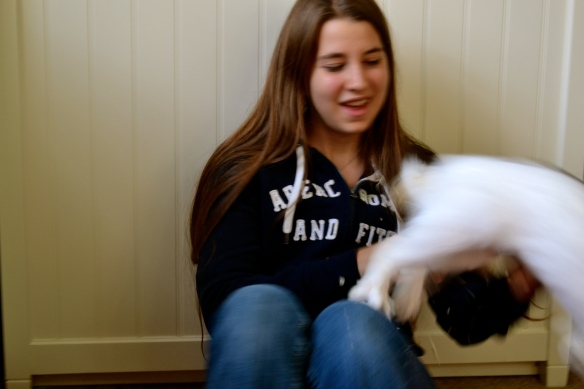 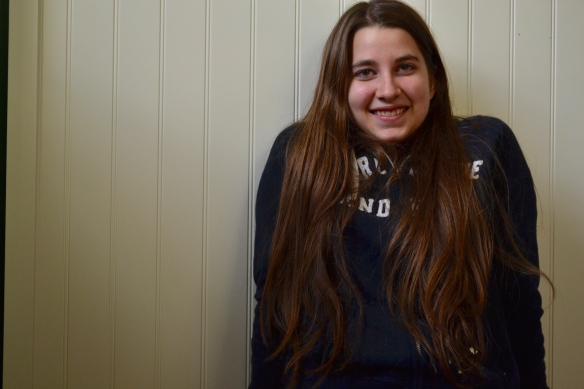 Aunt Cassandra helped me with the children at the playground so I could get my Bible study lesson done and then we headed home so I could start dinner and make some phone calls.  I picked up the boys at 5:30 while the rest of the family watched Tangled with Aunt Cassandra.  Back home again (busy day), I finished Grace’s special requested dinner, chicken Alfredo.  Uncle Isaac arrived and Rich picked up Grace at 7:30.   We were all singing a rousing rendition of Happy Birthday by 8pm. 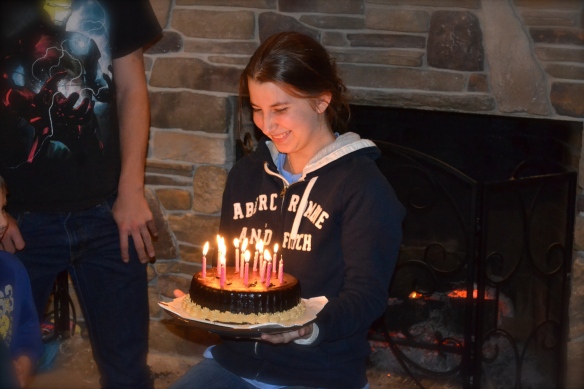 It was a Reese’s peanut butter ice cream cake.

A daughter is a day brightener and a heart warmer. ~Author Unknown

Grace is an adorable, well adjusted 15 year old teenager who loves school, family & friends, sign language, reading, her pets, Jesus, singing & drama.  She is a responsible and capable teacher’s assistant to her beloved chorus and drama teacher.  She is in Honors English.  She knows what she believes and she is not afraid to share her beliefs in a loving, respectful way.  She has her tough days but has good friends to talk to.  She is very loving and likes to give out hugs.  She hates to see people she loves hurting and would do anything to help them.  She likes texting, pinterest, and instagram (at home on the iPad).  She is a jeans and cute/casual top, with sneakers or UGGS kind of girl.  She has lovely long hair and pretty brown eyes.

I am thankful to have a daughter GRACE LILLIAN,  watching her grow is a blessing and a joy.

She said when her Dad hugged her the morning of her birthday he called her a little girl about five times.  She understood what he didn’t say, “I don’t want you to grow up too soon.”