Yesterday morning I walked out of the house into a sparkling fall day.  In my hands was a little vintage fiesta plate of leftover banana bread and cereal milk from breakfast, to serve the hens.  They seemed to enjoy the treat.

They explored the grass along the fence.  There are five full grown hens and two half-grown ones.

We do not let the little ones stay outside for very long because the cats come over to try and hunt them.  The poor things.

I gave them a bowl of chick food in a yellow fiesta bowl.  The way they hop in and out of the bowl, peeping and scratching food everywhere, is amusing.

The leaves were turning.

The fall flowers were in bloom.

My heart was singing.

You are the joy in my morning
You’re my song of praise
Just like the new day dawning
Flooding my world with grace. 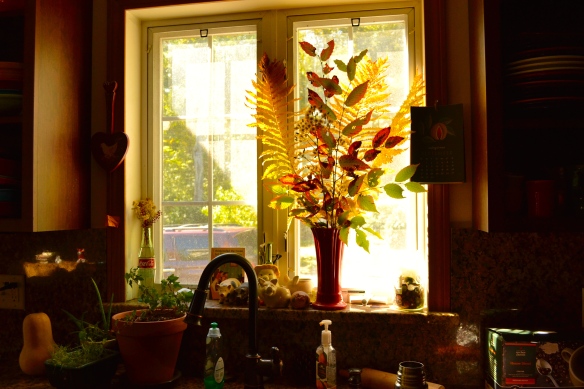 Caleb was home sick from school yesterday.  He had an upset stomach and a high fever.  He was on the couch curled up in his soft blanket and as much as I was able, I was sitting by him.  The children are so needy and love to have me near when they are sick.  As much as I hate to see them suffer, and as long as I know it’s only a common children’s illness, I confess– I love the cuddle time.

Caleb likes to talk.  It was an eye-opener to me when he said, “You know why I bury my head in the couch to sleep?  Because I don’t want my picture taken.”  My heart was so sad to think that I unknowingly made my poor boy uncomfortable with photography, it’s just that I think he’s so cute.  He doesn’t like the feeling that I’m taking pictures when he’s sleeping.  I told him I would never take another picture of him unless I knew it was okay and I asked him first.  He told me that one day he was falling asleep on the bus and a couple of girls took a video of him.  It bothered him.  I told him some things he could do about it, such as telling them that their Dad doesn’t want videos taken of him, or going to the principal or the bus driver for help, or asking them to delete the video.

We seem to be living in a time when privacy isn’t understood or desired.  I know that I personally love to share on my blog, but there is a part of me that almost envies that time not so long ago when families were in their homes and their lives were virtually unknown to the rest of the world.  They had their own private and intimate lives within the walls of their “nest”, special and meaningful only to them.

It is something to think about.

(I asked Grace about this, too, and she said she was absolutely fine with me taking pictures of her whenever I wanted.) 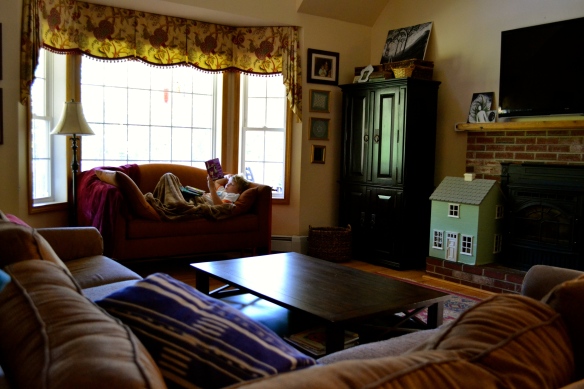 I asked Caleb if I could take this picture and he agreed.

Rich and I purchased a coffee table and a loveseat this weekend.  We needed more places for people to sit when they come and visit us and we were thankful to find things that we didn’t have to order and wait for.  Ethan Allen was having a floor sample sale on a lot of their furniture.  Both pieces have small problems but in our family we would rather buy things on super-clearance-sale WITH a problem, then to pay full price for a perfect piece that will get scratched the next day.

The maroon throw at the end of the love-seat is the latest loved comfort with everyone….it’s our very first electric blanket….and the children are all so very appreciative.  Ethan had it last night after football practice when he was shivering cold.  Seth fell asleep under it when he was sick last week.  Sarah had it this morning when the house was chilly.  Seth accidentally called it the “electra blanket” and the name has stuck.  We love our “electra blanket”.

I have been having fun freshening up the house (after an inspiring visit to my friend Lydia’s house).  I had Rich and the boys move the piano from the living room to the new addition and so far we all really like it in there.  You can’t tell by the photo, but there is still a good amount of room between the table and chairs and the piano, so we don’t feel squeezed.

I bought our first full length tablecloth, long enough for our big table.  It’s a linen fabric with golden leaves stamped on it.   We have 8 chairs around the table, and one bench that seats 2.

I also bought the mirror on the right side of the picture.  It’s reflection brings in even more of the sunshine. 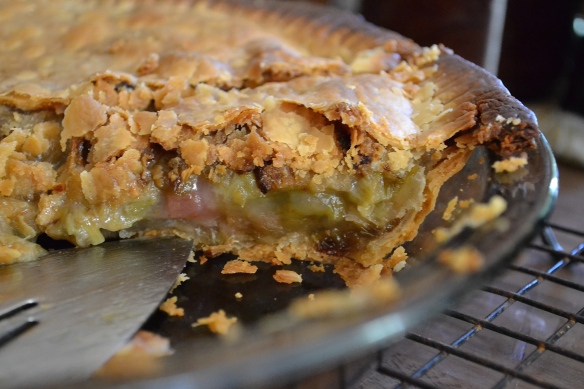 I’ve been longing to use more of the rhubarb from my garden that Mr. G so thoughtfully gave me to plant before he moved last fall.  I found a great recipe for a pie.  I used a store-bought crust, and baked it yesterday afternoon.  Everyone liked it.

Let rhubarb mixture stand at room temperature for 20-25 minutes, then stir and add to a pastry lined pie plate.  Sprinkle on top of the filling 2 Tablespoons melted butter, 1 Tablespoon flour, and 1/4 cup brown sugar.  Place the top crust over and pinch the edges to seal.  Poke top of pie with a fork and bake in a 400 degree oven 45-50 minutes (or until done).

Recipe adapted from one of my favorite cookbooks,  A Return to Sunday Dinner, by Russell Cronkhite.

I love candlelight, and these days, my favorite is a chocolate layer cake candle from Yankee Candle.  The children, especially Ethan, hate it because it smells so realistic that they are disappointed when there aren’t brownies or chocolate cakes in the kitchen (only rhubarb pie).  The candle holder makes me laugh, it’s also from Yankee Candle, and it’s a spoof on Snow White and the seven dwarfs.  I told the children it’s me and the seven of them.  “But where’s Dad?” they asked.  “He’s at work!” I reply. 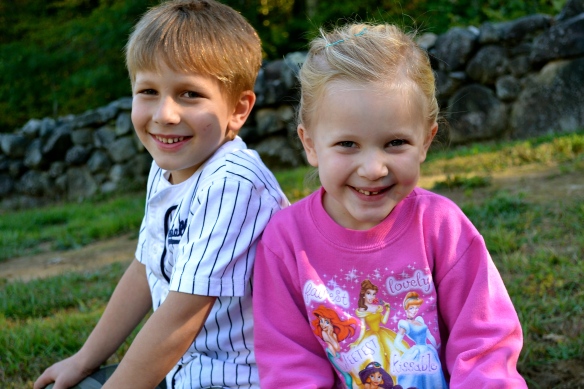 After Seth got home from Kindergarten we went outside to play.  Sarah cut a chunk of her hair off a few months ago so it doesn’t fit into a ponytail unless I use about five bobby pins.  Still cute.

“Mom, bring your camera!  David has a snake!” 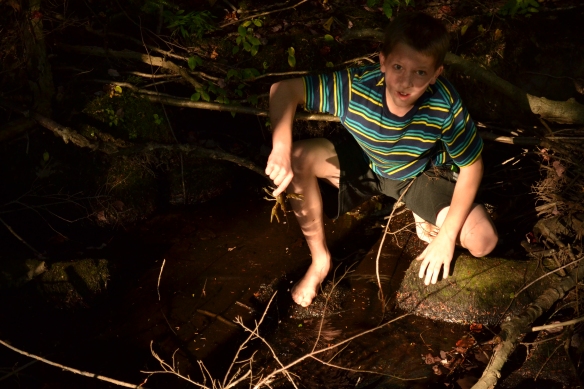 The stream is low so there are plenty of rocks to step on, which makes it easy to walk up and down the stream, exploring.  I got my head too close to the branch of a pine tree and it took my headband off and flung it someplace….it was black and I never did find it.

I watched this one for a little while.  It was busy, I saw it pick up an acorn-cap in it’s little legs.  It shuffled around, keeping an eye on me (the big monster?) 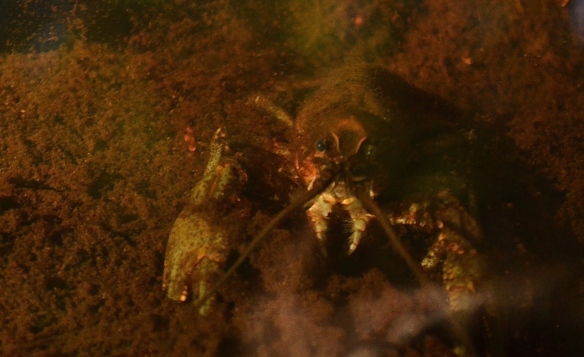 The boys like to eat them but yesterday I wouldn’t let allow it …. I became friends with this one. 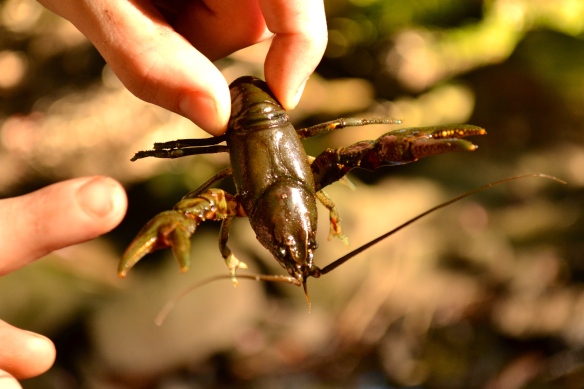 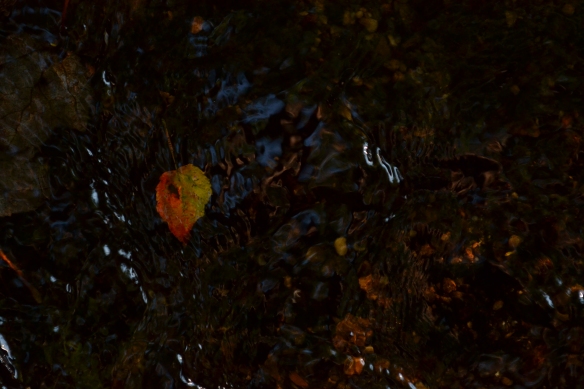 I took this picture last night because Sammie and Sherlock were sleeping together on the couch.  Would you believe they are from the same litter?  Sherlock is so much bigger than his sister!

“What does love look like?  It has the hands to help others.  It has the feet to hasten to the poor and needy.  It has the eyes to see misery and want.  It has the ears to hear the sighs and sorrows of men.  That is what love looks like.”  Augustine

10 thoughts on “these days”