The children were taught to notice “God sightings”, specific times during the day when they were aware of God helping them, showing them something important, teaching them, or keeping them safe.  Each footprint on the map represented one “God sighting”….and by the end of the week the footprints went all the way to the promise land.

Caleb is standing with his cousin, Makayla, my brother Nathan’s daughter.

This is Gregory (Makayla’s brother) with Seth.  They are both starting Kindergarten this fall. 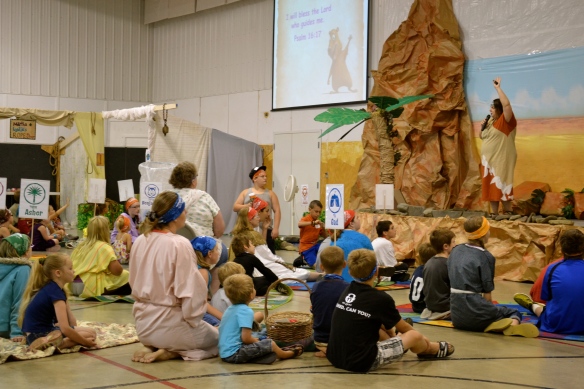 My Aunt Mary did the decoration design, and Aunt Colleen was on stage leading the songs, stories, and announcements.

Roger and Dawn are Colleen’s in-laws and I stayed at their place during the week; I have known them throughout my whole life.

“God gives us what we need–so trust God!”

Roger and Dawn helped my cousin Katie’s boys with a tambourine craft. 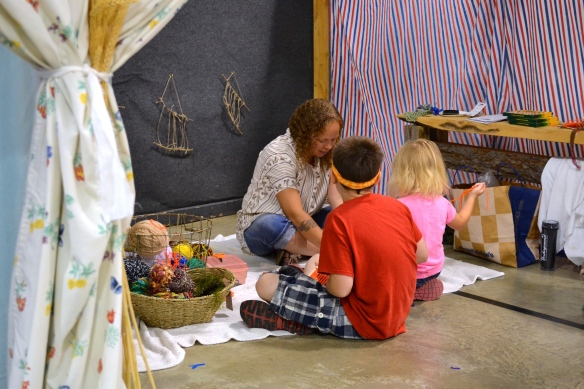 Cousin Erika was in charge of the weaving…my Sarah is in the picture, in the pink shirt. 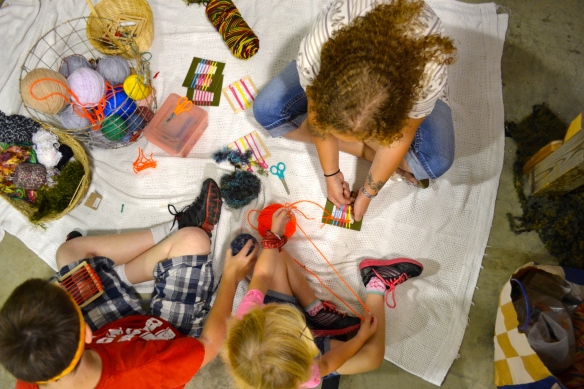 Pretty yarns and colors.  Sarah asked me to help her finish one of her weavings and then proceeded to tell me I was doing it wrong. 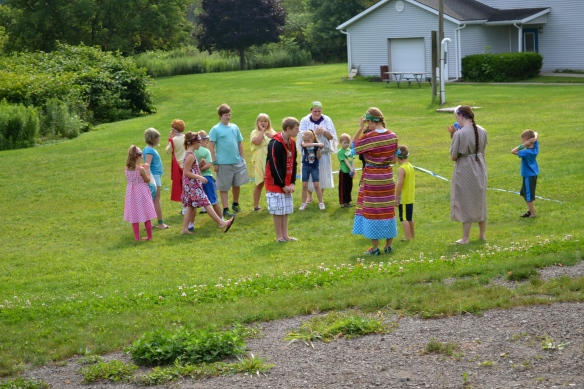 Sarah told me (she remembered later on, in the bathroom) that they played a game with toilet paper, they put the toilet paper on their backs, so silly!

The children each had a bandana to wear.  Seth wore his on his ears.  I watched him concentrate on making a necklace.  He strung beads and a bell on a string.  Guess where it is now?  Dangling from my rearview mirror….because he gave it to me.  Thank you, Seth.

Seth is such a busy boy that it amuses me to see him still and quiet.  Look at his crossed ankles….. and there’s Grandma Dawn again.  I guess she helped out all over the place.

On the last day some men brought exotic animals to show the children.  Caleb was thrilled.

He was thrilled because he got to touch a snake.  He is passionate about snakes. 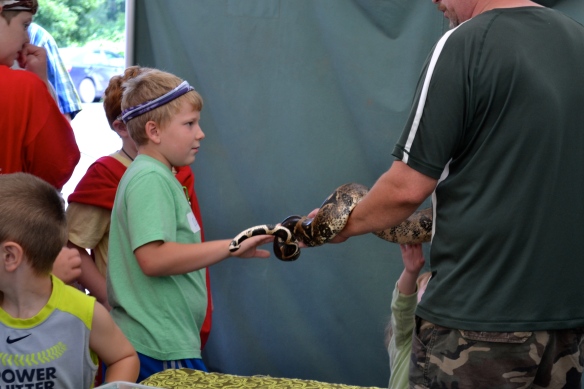 He stayed with the snake until he had to leave for another activity. 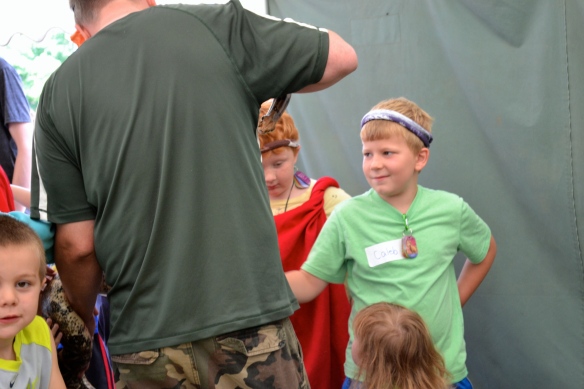 To say he was thrilled is putting it mildly. 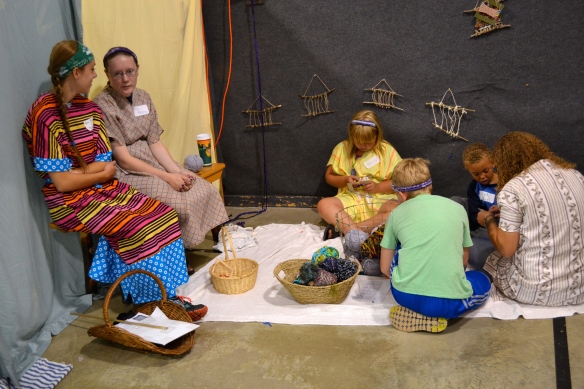 Then, it was his turn to do some more weaving with Erika.  Also pictured:  my cousin Marissa in yellow, Erika’s son Jack, and my cousin Molly in the striped dress.

You can say that this VBS was a family affair.  We got to spend time with Judy P, Mrs. Butler, Pastor and Mrs. P, Cassandra P (my future sister in law), Deb V, Candy L, Pam H, Uncle Rog, Aunt Carol, Carol A, Fran, Stacie and Jamie S, the Smiths, and so many other old friends!  Oh it was wonderful.

The songs are always a highlight of Vacation Bible School.  Seth (in striped shirt) did all the motions and dancing along with everyone else.  The songs were played up on big movie screens so the children could watch them and do the motions along with the people in the video.

This one was my favorite::

Thank you to everyone who made the week a wonderful time for all!  I spoke with Franny H and we both agreed it should last two weeks!  😉