We surprised Rich’s Dad and step-Mom with an impromptu visit one day last week after Vacation Bible School.  Leslie was busy moving furniture around, polishing her beautiful wooden floors when we knocked.  Missy the dog welcomed us, too.  The children love Grandma Leslie and running down to the barn to see the animals.  We let them go while Leslie showed me her flower beds.

She has big bright lilies growing, all different kinds.  We put Sarah in the middle of them for a picture.

Leslie has the most motherly instincts of anyone I know.  She has one grown son, and when he was born he brought to fulness the maternal instinct in her heart which has blessed everyone in our family….she’s quiet and kind, lovely and caring.   I looked at her as she described the spring in which she had a blue bird raise babies in a nest on the property, and how she herself “helped the mama bird take care of her babies”, and it just struck me again what a gift she is, and such a good example for me as a mother.  After I spend time with her I remember to slow down and nurture life and all the living things that cross my path, whether my chickens, my pets, my flowers, or/and most of all– my children.

To Love the Flowers

Whilst I was ruminating about Leslie, and maternal instincts, and love and flowers….my darling daughter Grace spoke next to me on the couch.  She was reading her summer book, Les Miserables, and wanted to share a part with me, and would you believe,  it was about a colonel who loved the flowers;

“Under the Empire, between two wars, he had found time to marry Mademoiselle Gillernormand.  The old bourgeois, thoroughly indignant at bottom, had given his concent with a sigh, saying: ‘The greatest families are forced into it.’  In 1815, Madame Pontmercy, an admirable woman in every sense, by the way, lofty in sentiment and rare, and worthy of her husband, died, leaving a child.  This child had been the colonel’s joy in his solitude; but the grandfather had imperatively claimed his grandson, declaring that if the child were not given to him he would disinherit him.  The father had yielded in the little one’s interest, and had transferred his love to the flowers.”  page 385

“The plot of earth which he called his garden was celebrated in the town for the beauty of the flowers which he cultivated there.  These flowers were his occupation.” pg. 383

“He was in his alleys from the break of day, in summer, planting, cutting, hoeing, watering, walking amid his flowers with an air of kindness, sadness, and sweetness, sometimes standing motionless and thoughtful for hours, listening to the song of a bird in the trees, the babble of a child in the house, or with his eyes fixed on a drop of dew at the tip of a spear of grass…….” pg. 384

Isn’t that inspiring?  People are made to love and care for SOMETHING, ANYTHING.  What a beautiful way to live. 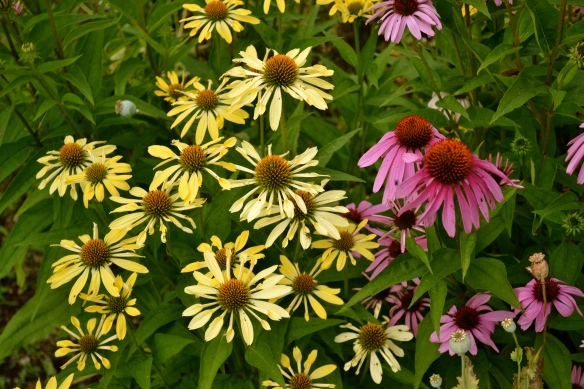 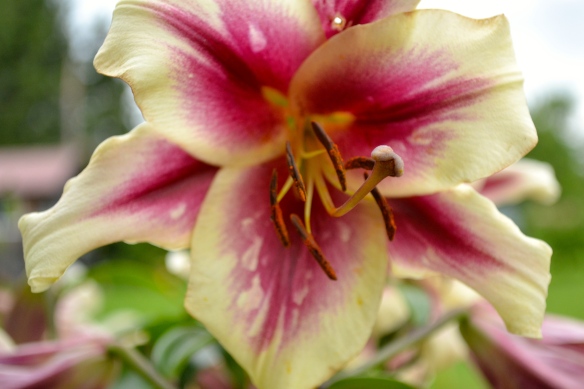 When Rich’s Dad got home he took Seth and Sarah down to the barn with him.  They each got a tractor ride, too (see the tractor on the far left of the photo?)

Let your gentle spirit be known to all men. (including your children)
The Lord is near.
Be anxious for nothing,
but in everything by prayer and supplication
make your requests known to God.
And the peace of God
which surpasses all comprehension,
will guard your hearts and minds (and linger in your homes)
in Christ Jesus.