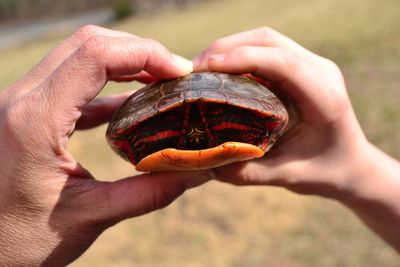 And then my heart with pleasure fills,
And dances with the daffodils.

The temperature climbed to the 60’s yesterday and 10 year old David, who is sprouting long arms and legs these days, walked into the icy pond and grabbed the first turtle of the season.  In the above photo, his hand and my hand are holding it steady for a quick snapshot.  The poor creature was frightened and stayed hidden in his hard shell. 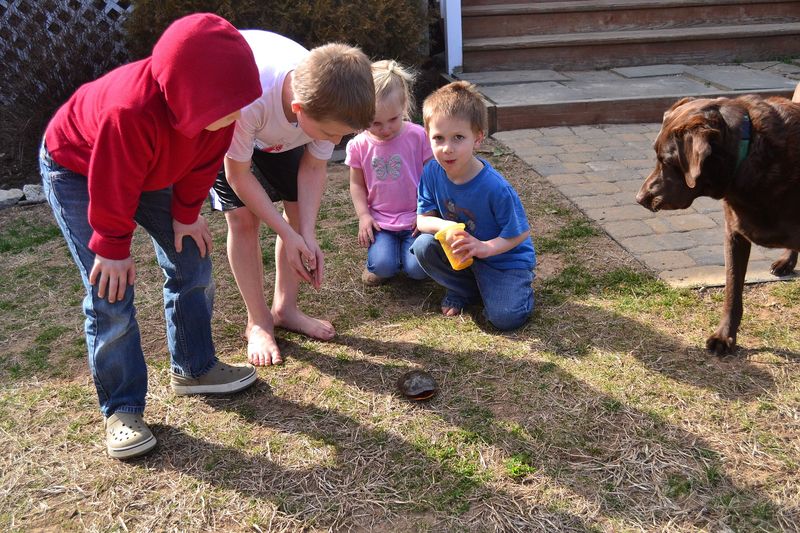 The children put him down and still he did not come out and walk.  The dog was tense with interest. 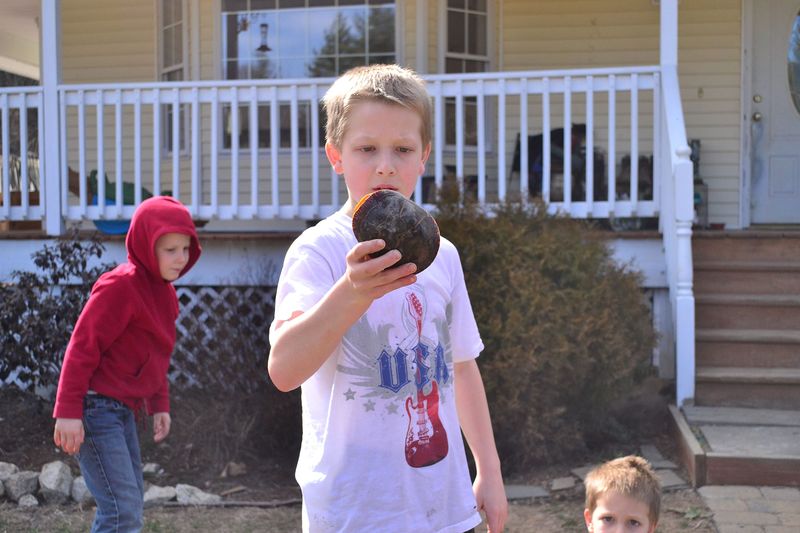 “What are you thinking about, Dave?”  I asked, noticing the expression on his face as he stood and looked at his catch.

“I’m wondering if it was worth it.”  He said, feeling the freezing cold wetness of his shorts.

I assured him it surely was worth it, after all, catching turtles is on his list of “what makes David happy”!

(And sad will be this mama’s heart when a spring comes and goes without a turtle caught and excitedly brought to me.) 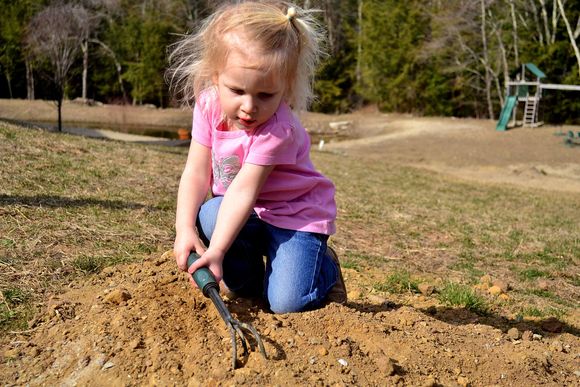 Sarah Joy did some digging, showing me yet another sign of spring, time to start the gardens! 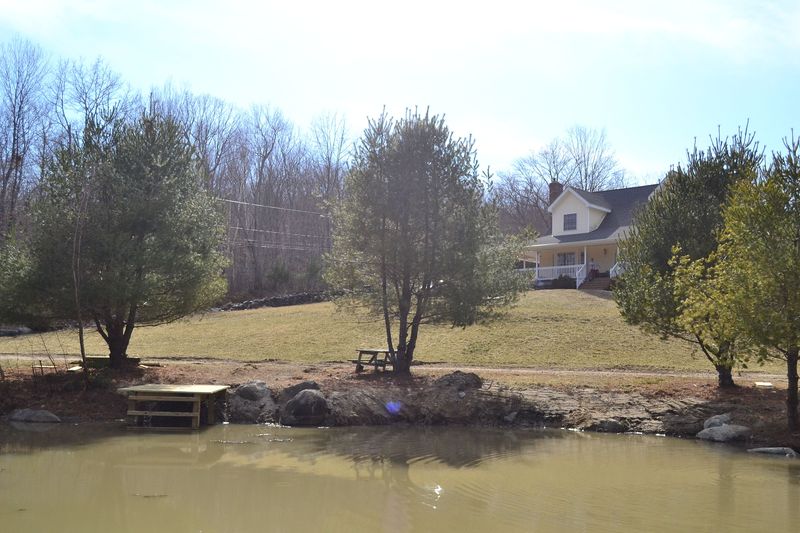 While I was at Jekyll Island last week, my husband drained most of the water from this pond (we have two of them), re-shaped and scraped the edges, and built a dock.  The older boys helped him as much as they could, between school and sports.  Rich labored away, even using an entire cold night to get the project done.  He pumped water from the nearby stream to refill the pond and now we are waiting for it to settle and clear. 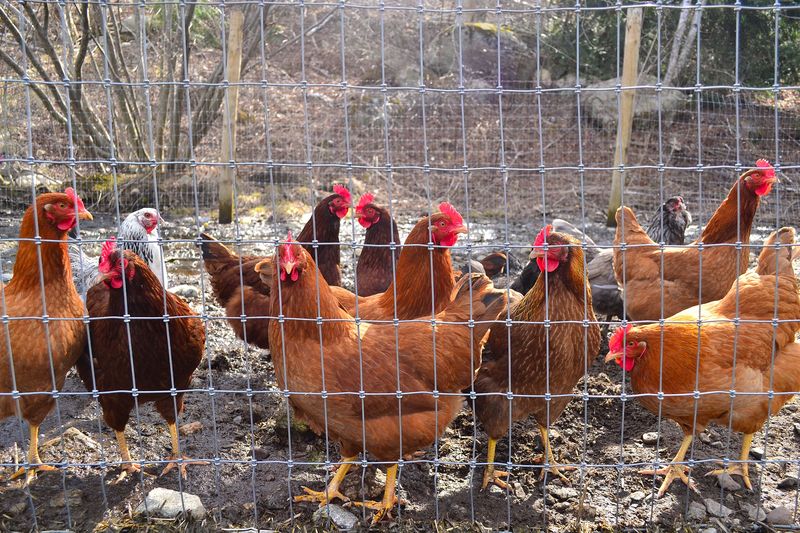 I came home to discover that Rich had found it necessary to “dispatch” our rooster, George.  I very much liked to hear him crow throughout the day, but I am relieved that we can now come and go from the chicken coop without worrying that George will hurt us.  One day last week, when Rich was busy caring for the flock, George snuck around and attacked him.  Unfortunately for George, he picked on the wrong person that time, and soon found himself senseless and deader than a doornail.  *sigh* So sad.  It was bound to happen one of these days and Rich was horrified to think of what the rooster would have done to Seth or Sarah.

The hen house is a now gentler place, but still not quiet, with all the girls gabbing and squawking constantly. 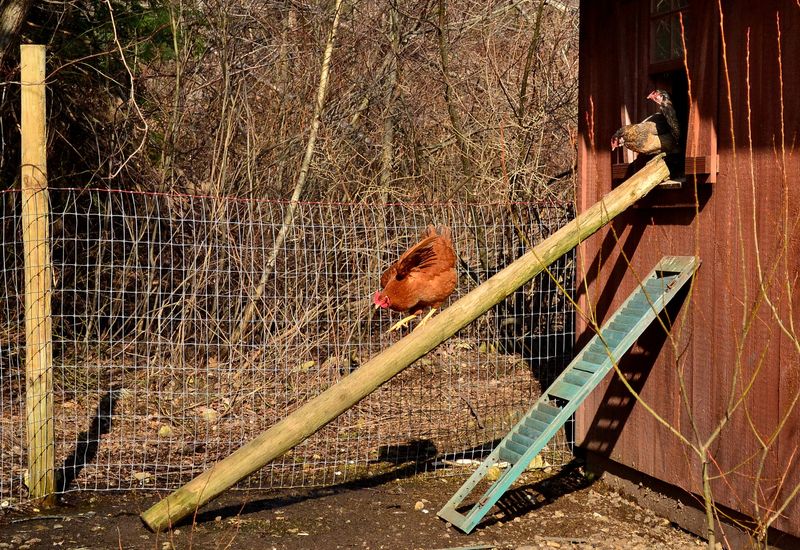 Today, Seth, Sarah, and I spent the whole morning outdoors (with trips inside now and then for drinks and snacks).

The temperature reached 70 degrees before lunchtime. 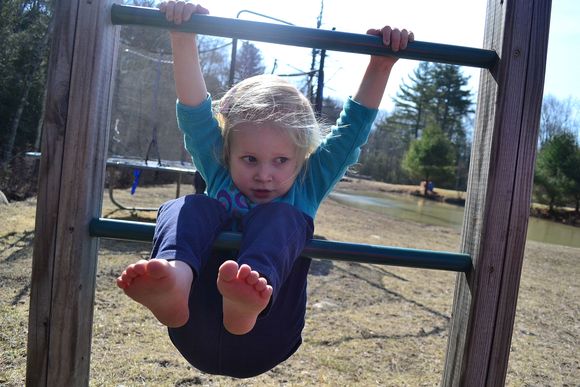 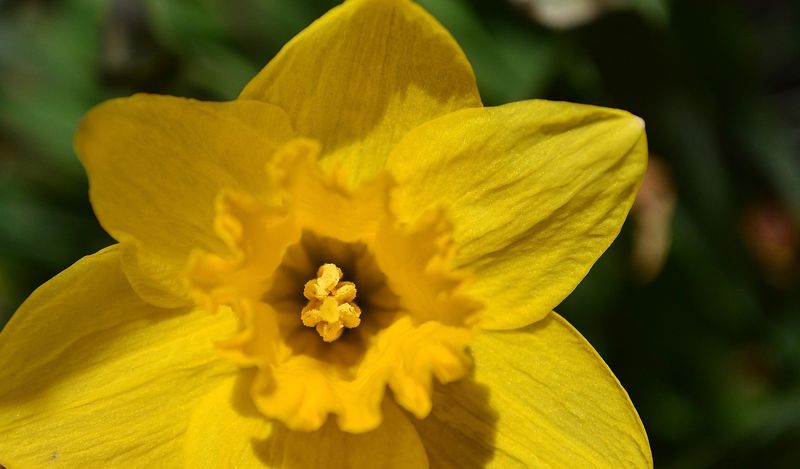 The daffodils have been trying to come up for months now and I rejoiced to see the first bloom just this morning.

The children were right with me, so I brought them close to show them.  Seth said this one had paper on it: 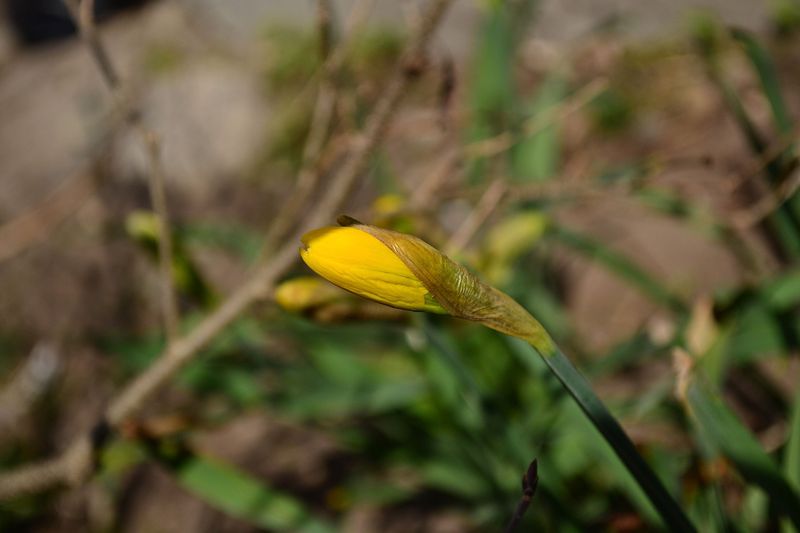 I thought it was very observant of him. 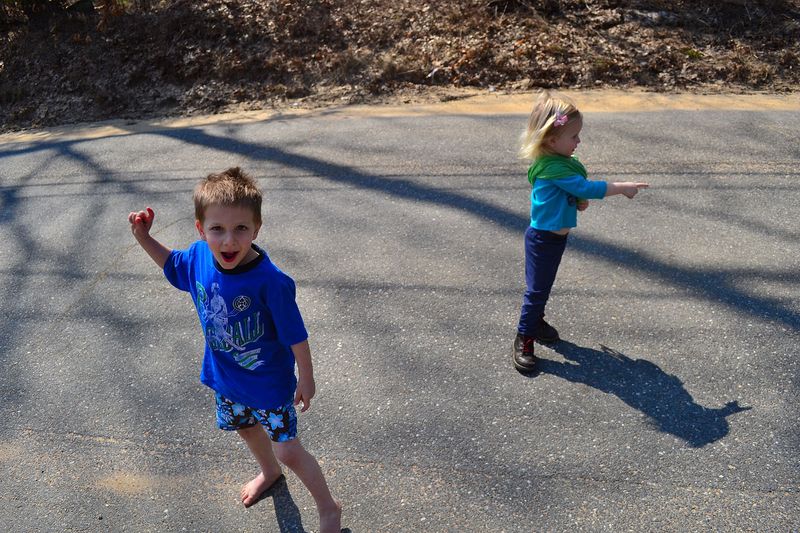 I made the mistake of asking Seth and Sarah which way they wanted to go, “up the road or down the road.”  She chose up, he chose down.

We decided to go down, and then back up.  Seth walked the whole way in bare feet. 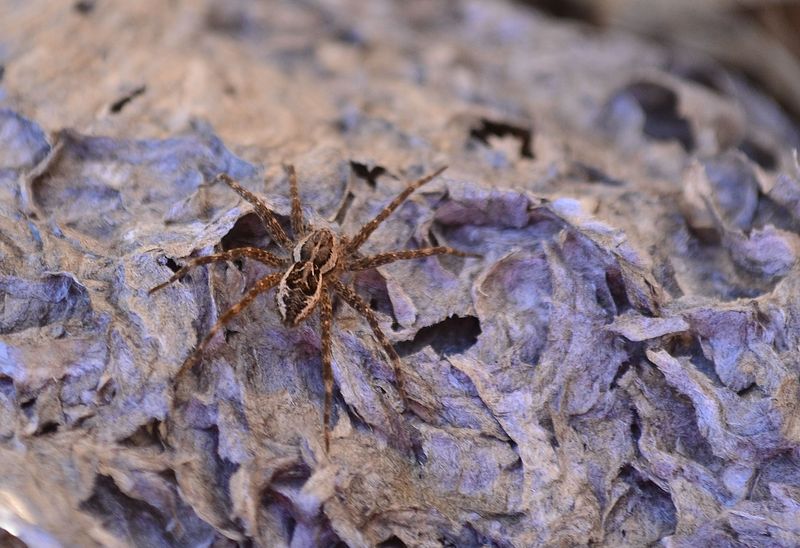 The hornet nest that was hanging in a tree by the stream came down, along with the branch it was formed to.  I walked carefully down to pick it up and found a spider.  I told Seth to look but he looked the other way and said, “I don’t want to look!”  I didn’t really want to look either. 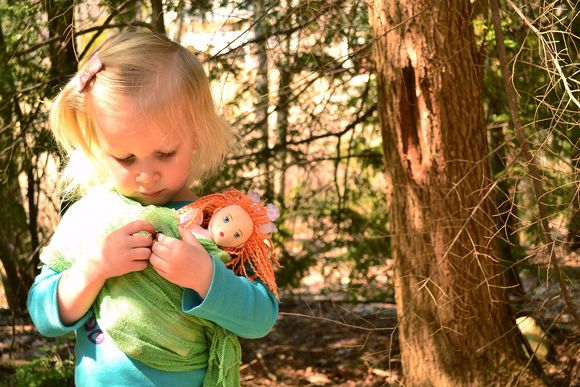 She wanted to take her baby on our walk, so I took one of my thin scarves from the closet and wrapped her around with it.

Sarah is extremely motherly and almost swooned with contentment to carry her baby this way.

(In the above picture, she is being motherly toward a small pinecone.  She didn’t put it down again until she had found a second one, which she explained was “it’s mother”.) 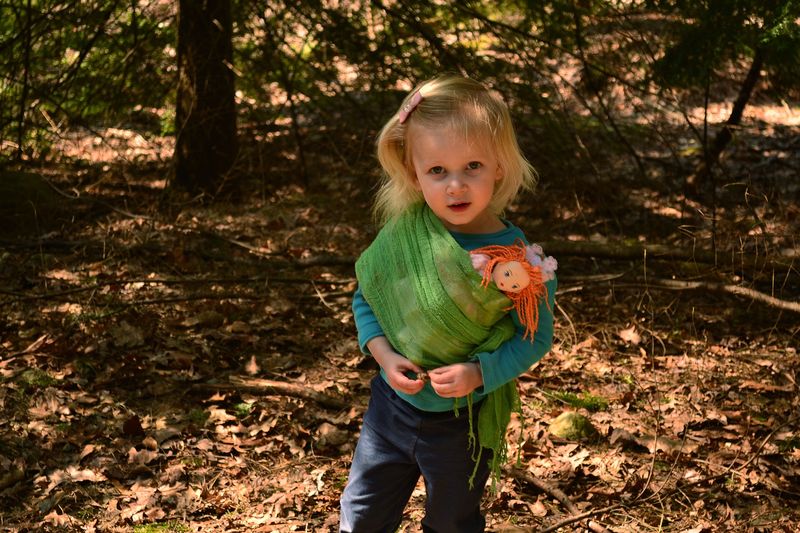 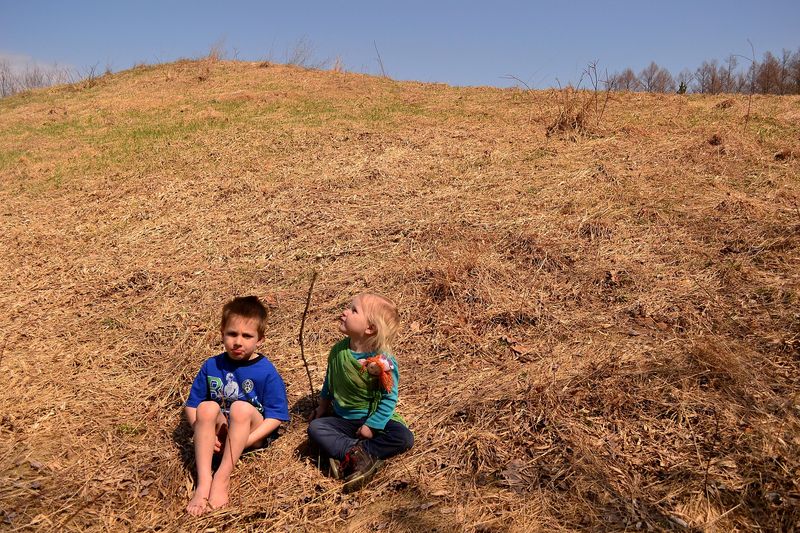 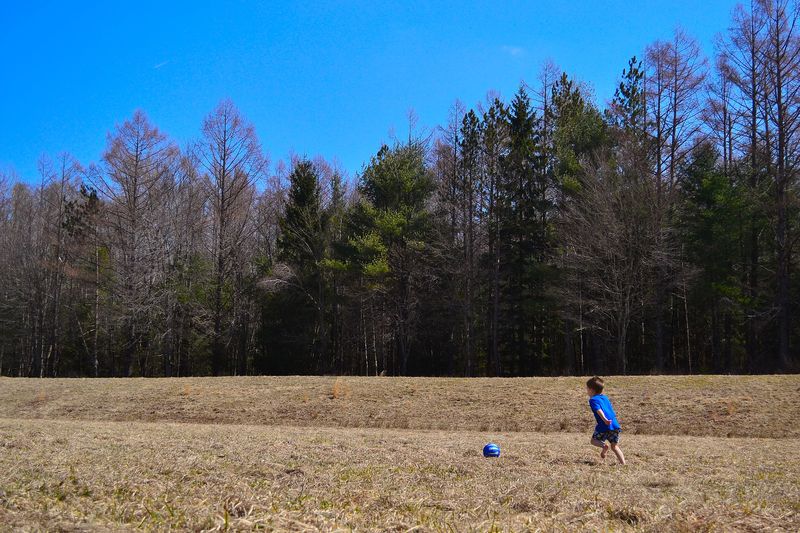 We walked through the woods to the open field and Seth did all his soccer moves. 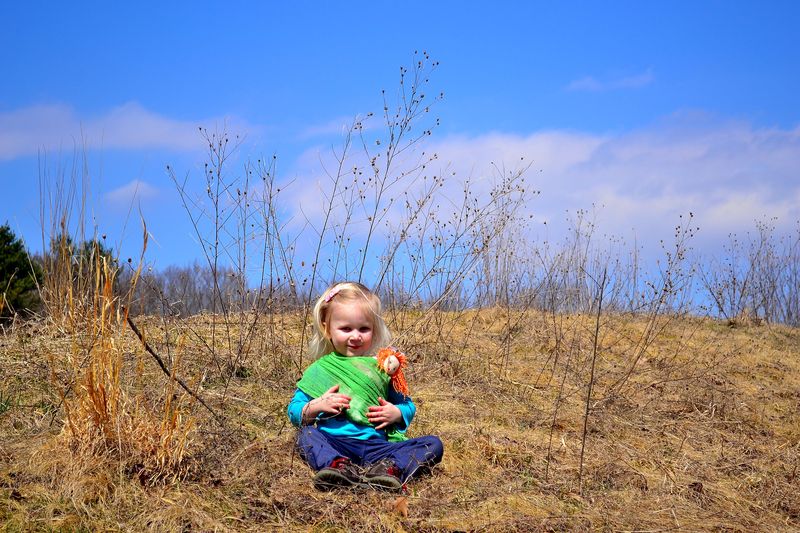 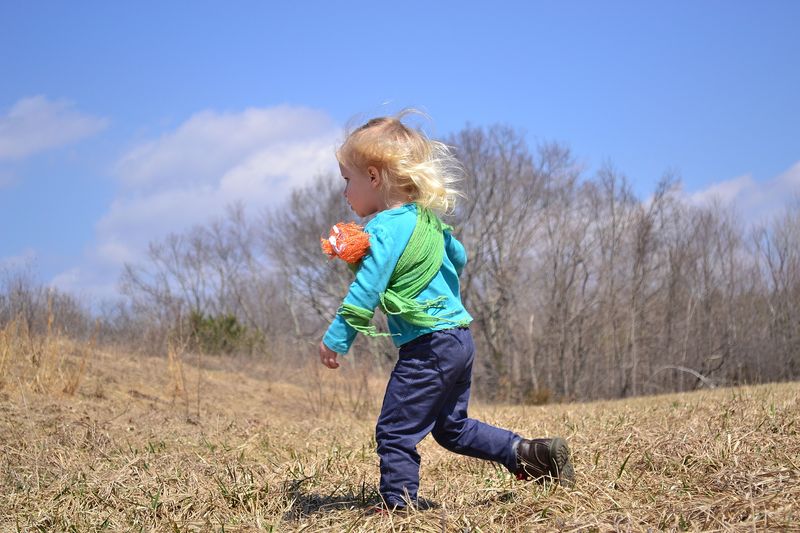 Sarah sat and watched her brother, then ran around, did a somersault, and never once lost her baby.

After a gloriously fine morning, they were happy to go to their beds to take a nap.

I hung up my (now spiderless) nature find. 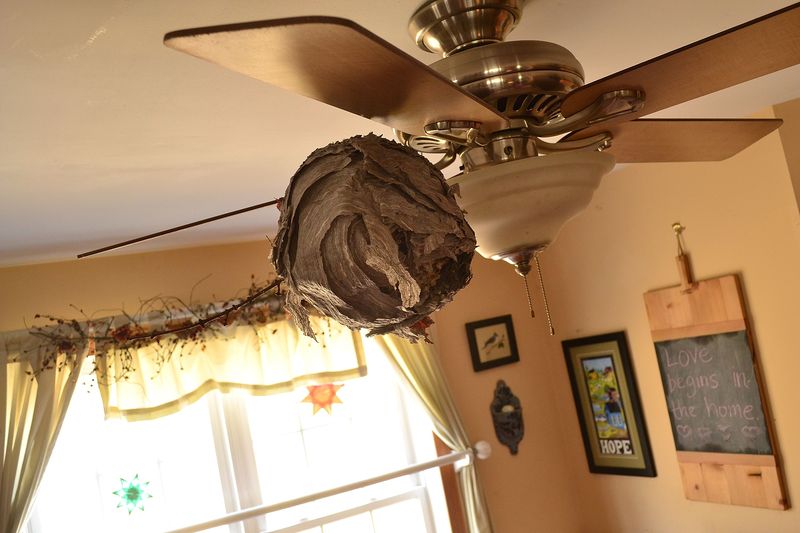 And then I went back outside to a blanket with my lunch and my current quick-but oh so delightful- read. 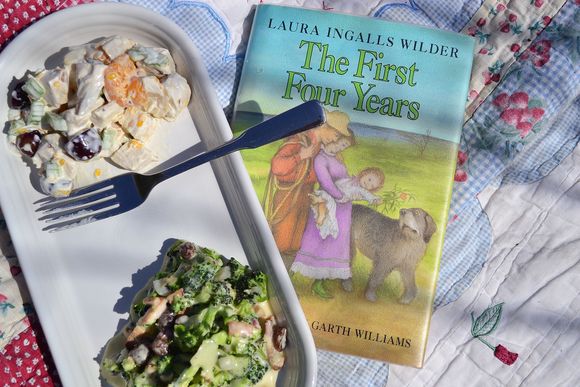 I made chicken salad this morning and it was the best recipe I have tried.  The chicken was marinated in white wine for a day, then baked in the same wine.  It added such a good flavor.  Then I added halved grapes, a small can of mandarin oranges, toasted almonds, and chopped celery.  The dressing was half a cup of sour cream and half a cup of mayonnaise, with a good amount of salt and pepper.

The other dish is a new broccoli salad recipe from the same cookbook, made with a cooked dressing.

“The snow was soon gone again, and spring really came, with the singing of meadow larks and the sweetness of violets and new grass as all the prairie turned a beautiful soft green.  Laura put Rose in a clothesbasket with her tiny sunbonnet on her head and set the basket nearby while she and Manly planted the garden.”  ~The First Four Years, page 79

14 thoughts on “a fine spring day”