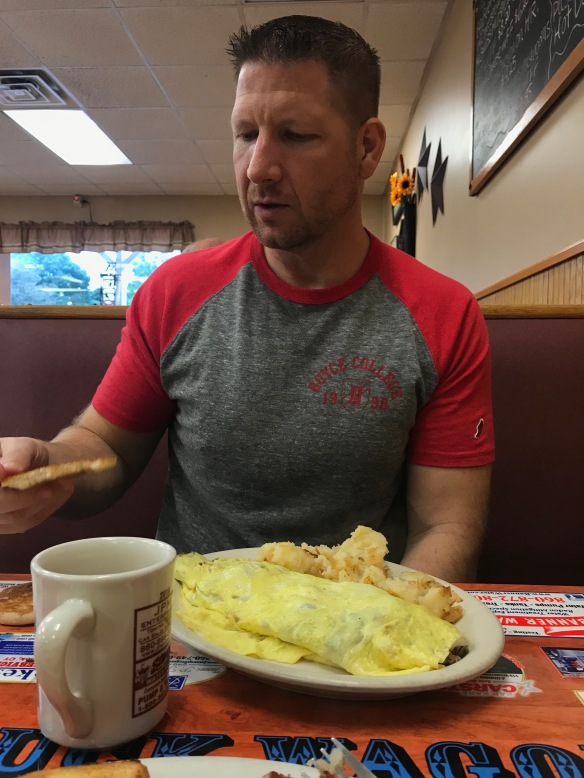 Rich and I celebrate our 23rd wedding anniversary on Sunday the 16th of September and since Sunday is a busy day for us, Rich took today off so we could spend time together while the kids were in school.  He’s at an eye doctor appointment now (4:30pm) so I have time to post a few photos.

We ate breakfast at a diner, the next town over, even though at the moment we don’t “like” this town because their youth football teams beat our teams very badly last week.  That was Rich’s remark anyway, which made me laugh.  This diner was hopping with folks “of a certain age.” 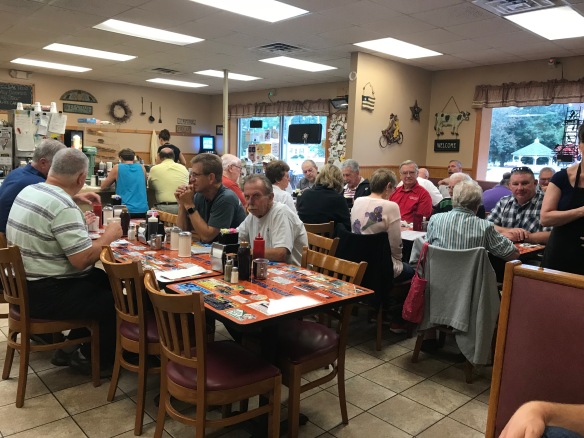 This is a small town to have so many people at a diner for breakfast and Rich thinks it’s because it’s such a nice place but I think it’s because there is a senior living community just down the road.  It was fun to see people coming in a various times and getting enthusastic welcomes from their friends.  There was an older lady that looked similar to my Aunt Betty and I kept looking at her.  There was an older man with an oxygen tank.  There were hugs and loud conversations.  “Yeah, I feel good today!” said one gentleman to another.  Rich and I settled in to our eggs and potatoes and just enjoyed the atmosphere before heading to my hair appointment.

This was taken in the car after my appointment.  My hair stylist, I think, let the dye sit a little too long because my head along the hairline is also dyed and it will not come off yet.  I had the roots done and a little trimmed off the ends and Rich worked on his laptop outside in a lawn chair while he waited for me.  We had enough time that I could have dropped him off at home while I had my appointment but he said he wanted to stay with me.   Then we drove the backroads to the mall and stopped at an apple stand/coffee/bakery on the way.

Rich picked out a nice apple but when he ate it in the car he said it was mealy, so that was a little disappointing.  Out it flew through the car window into the trees.

He saw this toy tractor and pointed it out because he liked it.  He’s a farm boy still.  He has a small John Deere tractor in our garage.

He took me to Barnes and Noble and I bought the newest Flow mazazine but once I got home I realized that someone had taken the free wrapping paper out of it so I’m a little annoyed about that.  I also got a Breathe magazine and the Newbery Honor book Echo, which is a big beautiful hardcover book with 585 pages!!!!  I hope it’s as good as I am anticipating.  I can’t read it until I’m done with The Windy Hill (1922).  Rich got a couple of men’s fitness magazines and one of them has a young Arnold S. on the cover only wearing a small bathing suit which was horrifying to see.  Rich is slowly easing into running again after his disc surgery but has been able to keep working on his upper body and to me, looks amazing.  I’m so proud of him and the way he continues to get up early three days a week to work out and keep himself healthy.

I took a photo of the cover of this book because……..

Inside there was a photo of fiestaware (mixed with Bauer).  SO pretty!

We sat at a table by the window for a while.  He had a pumpkin spice latte and I had a matcha green tea latte and then we drove back home.

We ended up having a good hour to ourselves before the bus came.

11 thoughts on “day with the husband”

Leave a Reply to B Cancel reply