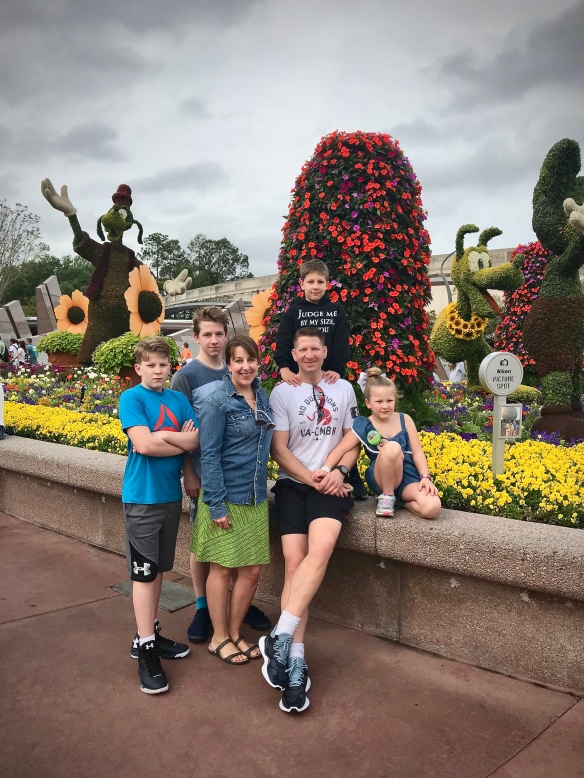 We went to Epcot on March 31st, Rich’s birthday.   He had been looking forward to his Disney birthday for months.

For a breakfast treat, he wanted to get a coffee from Starbucks more than anything but had mistakingly passed by the one on our way to the park.  Imagine his joy when, as soon as we got through the main entrance, there it was!  A Starbucks right in Epcot.  We had the children sit outside while we stood in line to get our special coffees. 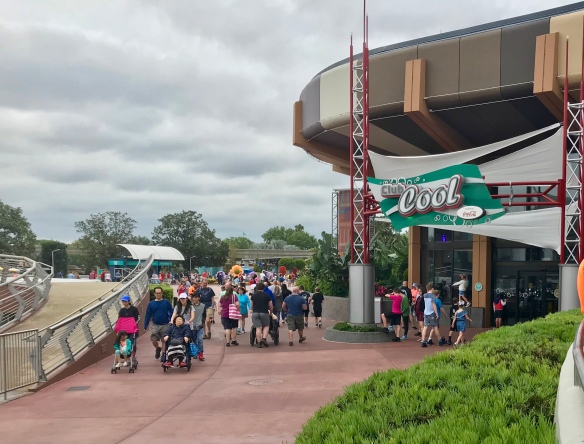 Next stop was the “Club Cool” building for CocaCola, which has been a highlight since we first visited Epcot years ago.  If you lean in you can see the children walking in under the sign.  (I was standing outside Starbucks when I took the photo).

They had free samples of their slushy sodas.  And then, the children taste tested all the soda “flavors from around the world”.  I tasted a couple of them, too.  Rich refused.  He was content with his coffee.

Nothing like the feeling of lots of sugar first thing in the morning!

Sarah and I were happy to split from the boys and go our own way.

There were flowers in bloom everywhere we looked.

We bought jewelry made by this nice lady, which she crafted from things in nature.  For example, the red in my necklace is naturally dyed orange peel!  Sarah picked out earrings.  The interesting thing was the lady was originally from Connecticut and knew our hometown.  While we were there, we also bought a map (Sarah is holding it in the photo) with Easter Egg stickers to put on each spot after we found them in the park.  It became a fun highlight of our day.

Here is the first one we found!  Do you see it?

And then Mary Poppins walked right by us!

By the way, Sarah had no desire whatsoever to meet any of the Disney characters who walked about in Epcot or any other park.  She especially disliked the costumed animals like Chip n’ Dale, or Goofy, etc.  I would have liked to take her photo with a princess but “No” she shook her head and planted her feet into the ground.  I could understand so didn’t press it. 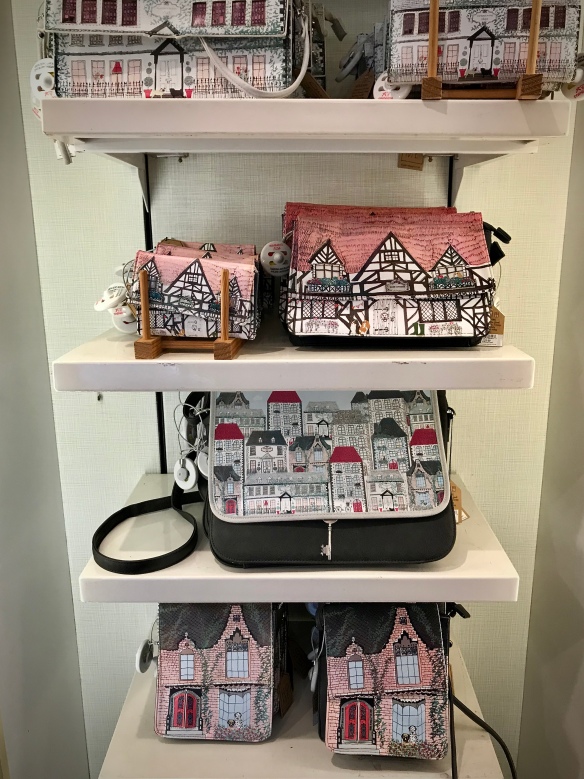 I took a photo of the beautiful leather purses in “London”.

On our way to “France” with the Eiffel tower behind us.

I was so heart-happy to have Sarah’s hand in mine on this day, always thankful that God gave us a second daughter.  I told her so, too.  It put a sweet smile on her face.

All of my children are a blessing and a joy.

Each country had a lovely Topiary that I always pointed out thoughtfully to Sarah, who never seemed to be as impressed as I was.   She was too busy looking for the egg. 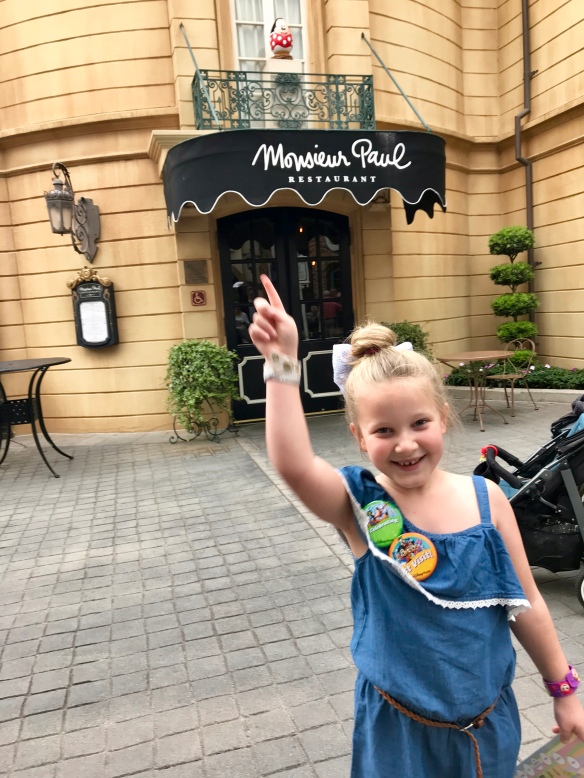 thought of Joanna……with the teapots….

“Take a picture, mom!” said Sarah.  I called birds like these “Parasitic Birds” because they were just hanging around trying to steal food.

Sarah was also given a fan to carry to each country for a stamp and a picture.  It was a nice little “time out” throughout the day as she stopped to color.

This is the table in “Germany”, the girl is coloring on Sarah’s flag.  I had to take a photo because an old copy of Grimm’s Fairy Tales was on the table and I’ve been reading it to Sarah.

We ate in Germany and watched the little girl next to us throw chips to yet another “Parasitic bird” (a duck this time).

Norway!  My favorite section of the park! 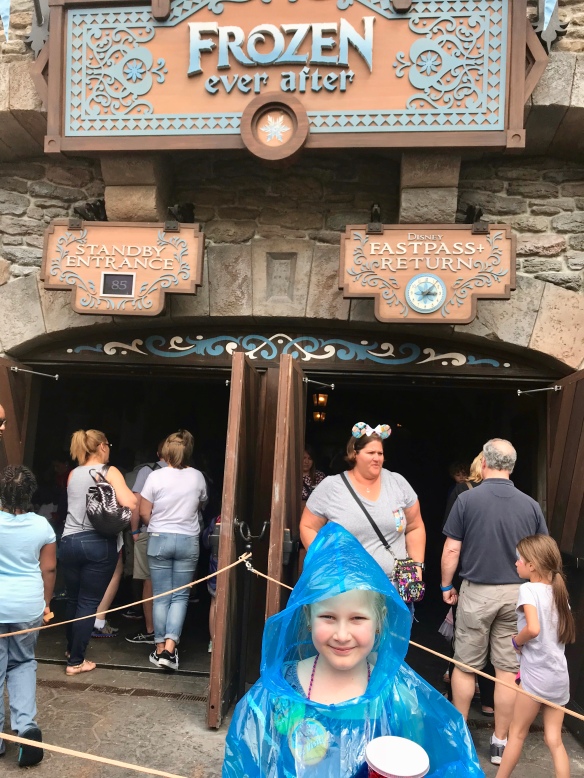 It briefly rained.  Good thing I had ponchos in my purse (#1 Mom).   While standing in this line we made friends with the English family next to us.

I met a Viking!

We met back up with the boys after going on the Frozen ride.    Rich had gotten himself a birthday jacket from Norway and looked very handsome in it, too.  We headed to the Norwegian bakery for some treats.  I was told the Schoolhouse buns were the best so I bought one and enjoyed every single bite.  In fact, I want more than anything to find a recipe and make them myself here at home. 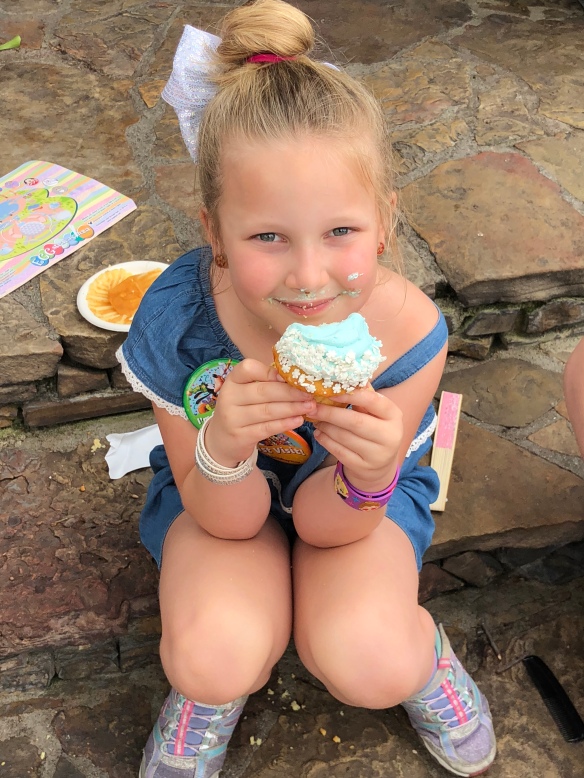 Sarah’s Elsa cupcake was amazing.  It was so big she couldn’t finish it so I had to take a bite.  The cake was fluffy and homemade, there was chocolate filling and frosting, both wonderfully tasty.  Seth and David finished it up. 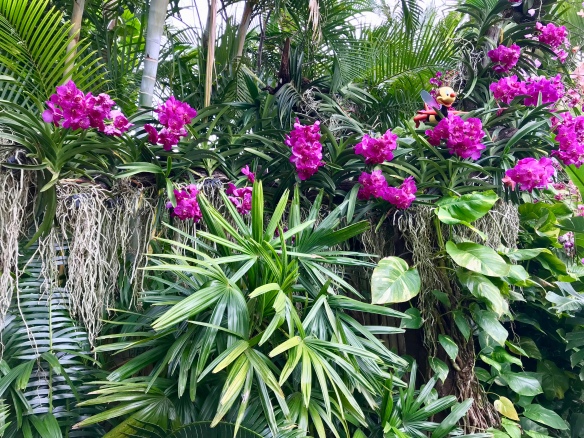 Orchids, the way they should look.

We went to go ride on the Nemo ride and visited the aquariums where David made friends with the fish.

And people started to get silly. 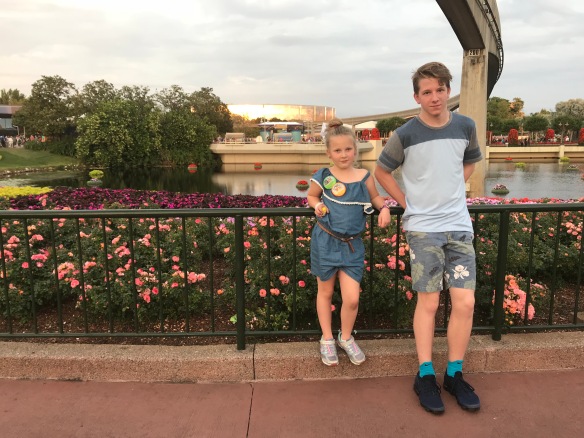 David in his “nerd store” (his words) he loves anime and greatly enjoyed the Mitsukoshi Department Store in” Japan.”

Sarah and I picked out some candy.  David got a shirt and a tea cup.  The shirt is a long story.  Months ago, I found him carefully cutting out a graphic and coloring it from a page he printed online.  He wanted to transfer it to a t-shirt but had to stop when he realized regular paper wouldn’t work, he needed transfer paper.  But then in Epcot he found the very shirt he had wanted to make.  Sadly, as soon as we got home, he was wearing it when he picked up his half-wild cat who got scared and scratched his way out of David’s arms, cutting a hole in his new shirt with his very sharp razor- like claws.  David said, “What about my arm?”  it was scratched and bleeding.  “Your arm will heal, but I’m the one who will have to mend your shirt, you’re special shirt you just bought in Disney!”  Thus, David has a unique shirt from Disney, already ripped and mended by yours truly (and I did the best I could but it wasn’t a mending that could be hidden very easily).

We liked all the candy but for the green tea KitKats and the bean paste gummy candy. (ew) 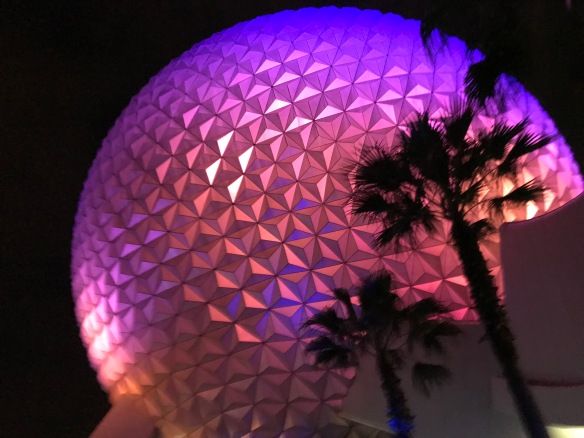 After the fireworks show we headed out.  The park was closing so we were in a big crowd as we tried to keep up with Rich, who walks very purposefully with his long legs.

I yelled for him to stop walking for a photo.  Thanks, Birthday boy!  It was the best day!

According to my step calculator on my phone I had walked 9.7 miles. 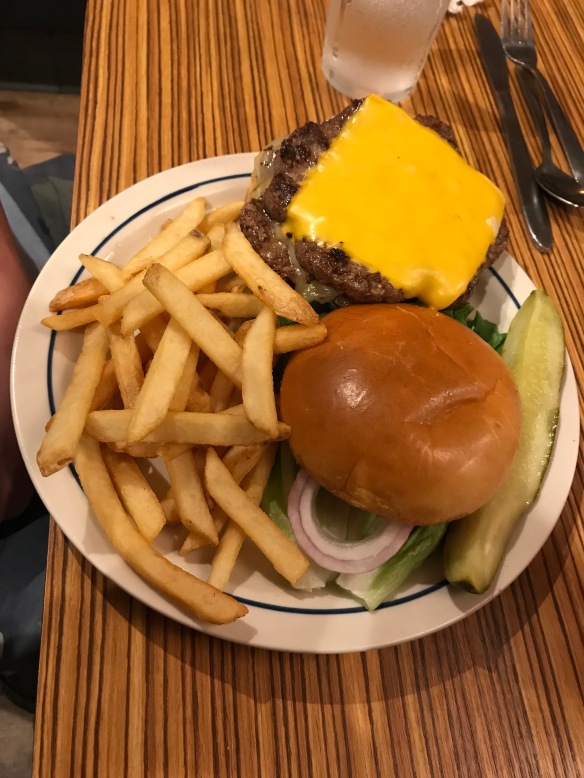 David’s “after a long day at Epcot” greasy cheesy hamburger at 11pm! 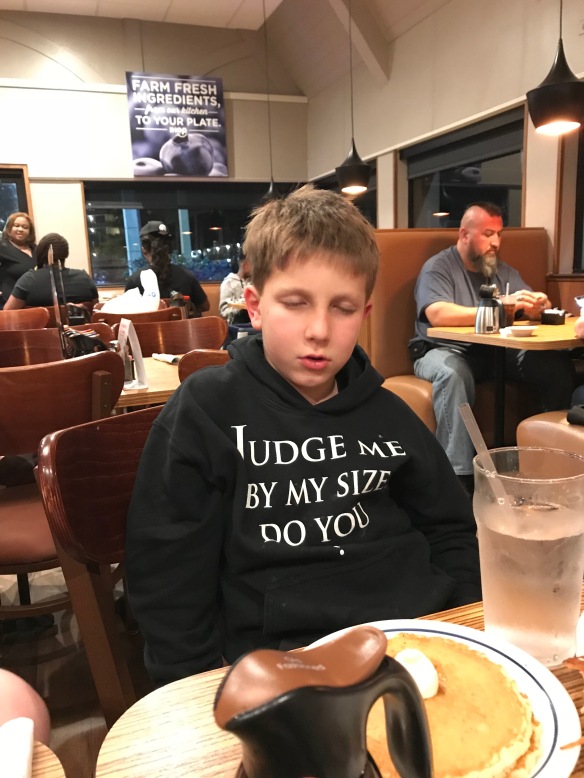 In fact, Seth started falling asleep right at the table.  Rich and I felt proud that we had finally made our most active child tired.