The girls had toast this morning and I was in the kitchen eating a bowl of cereal when I smelled a smell….and yes indeedy when a mom smells a strange smell she becomes very much like a bloodhound sniffing the air and moving her nose up and down and all around the room.  I decided it was Rich’s video recorder which he had just plugged in using a kitchen outlet.  The smell of a battery vigorously charging?  A questionable but satisfying deduction, in my opinion.

Eventually, Jacob and Caleb put bread in the toaster.

By this time I had gotten myself snuggled up on the couch in order to finish my book, I’m at the very end when things are getting deliciously riveting.  Ah, Saturday mornings.

“Mom, there’s a lego head in the toaster.” Jacob informed me. 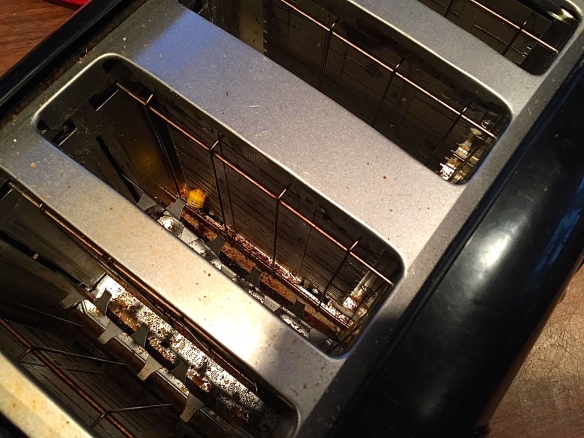 Dang.  A bloodhound would have gotten this right.

I had just read an article about single use plastics and how they should be avoided at all cost, the most fearful reasons of all being, “leaches toxins into food and drink” and “causes hormone disruption and cancers.”

Not sure if a lego would be considered a single use plastic but…….

“Get it out before it leaches toxins into your toast!”

“Mom it’s too far down to leach toxins into my toast.”

“Was that the smell I smelled?”

“How on earth did a lego head get into the toaster is what I want to know.”

“Why do you want a picture?”

“Because it’s just one more example of life with boys that’s why.”

The boys now possess a one of a kind plastic head.

Back to my book until the next random interruption occurs.  Stay tuned!

4 thoughts on “the smell of a toasting lego head”