Another full to the brim weekend!

I took the younger kids to a college wrestling meet on Saturday because Ethan was there…oh how wonderful it was to see my son after a month of being apart.  He looked great.

After the meet we stopped at Costco to quickly get some food trays for Sunday.  As soon as I got out of the car, my brother Isaac was saying hello from just across the lane in the parking lot.  That was fun, and we hugged.

On Sunday morning, Rich and I were able to sleep in until 7 and then relax with coffee because we elected, after his head injury, to not have Seth wrestle this weekend.

However, David and Caleb had a meet in the afternoon and they both won second place medals in their weight brackets.  The school did a great job of moving the meet along at a quick pace so everyone could get home (we live in New England, after all, and had a big Super Bowl to watch)……..

We got home just in time to do a quick run around for a last minute tidying up.  And then the Super bowl party.  We were all cheering for the Patriots so the first 3 quarters of the game were pretty disheartening.  But then!  Wow, Caleb (the biggest 11 year old fan I’ve ever met), was so happy when the Patriots finally got their groove and won the game in overtime. 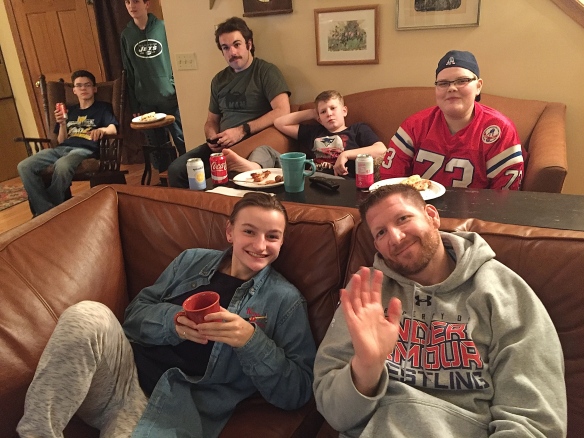 We temporarily moved in the little couch behind the big one for more seating.  Rich invited his HS wrestling team and four of them are in this picture, along with Caleb who is sad because the Falcons keep scoring, Tessa (Ethan’s girlfriend and our neighbor) and my husband waving.

Michael, Zach, Caleb, and Grace sat at the kitchen island where most of the food was located.  We put the cookies in the other room on the table and the crock pot of meatballs (thank you, Louis) was on the counter near the drinks.  We bought 2 cases of seltzer and a case of Coke, guess what got drank up the fastest???  Yep, the soda.  All gone in one night.

My brother Isaac and his wife Cassandra, who brought the best chocolate chip cookies.

We had two sheet pizzas, and wings, too.  Two fruit bowls, and two veggie trays from Costco.  Lots of chips and dip.  Baked sausage and sauce.

Caleb turned to me and said, “Now they have no chance of coming back, Mom.” after the Falcons scored again.  Uncle Dave texted him telling him to keep his chin up, they could still make a come back.

While Rich and I were at the boys meet on Sunday, Grace taught Sarah how to sing from the hymn book.  She found a ready audience in her Aunt Cassandra.  Sarah’s favorite hymns to sing are “Come Thou Fount” and “Joy to the World.”

She is also learning to play the piano. 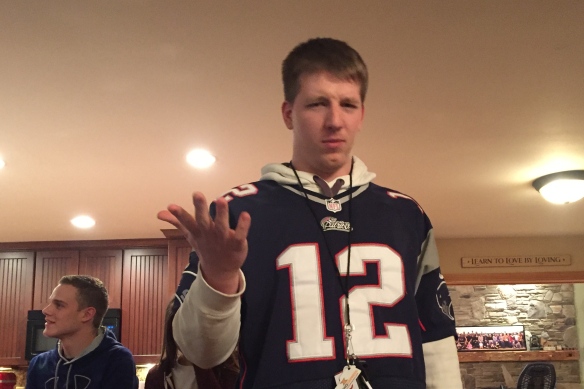 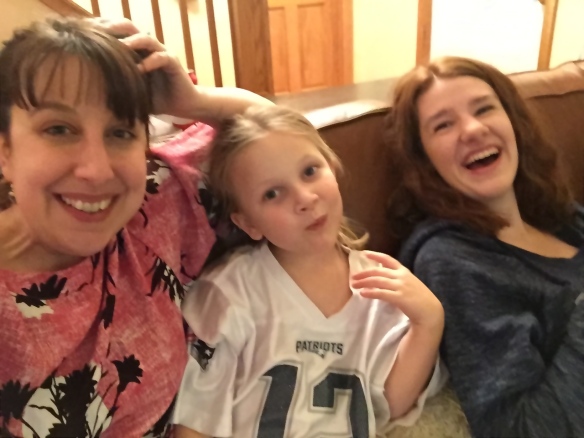 Me, Sarah, and Allie (who was the most vocal about her opinions on how the Patriots were playing).  I never knew she was such a fan.  🙂 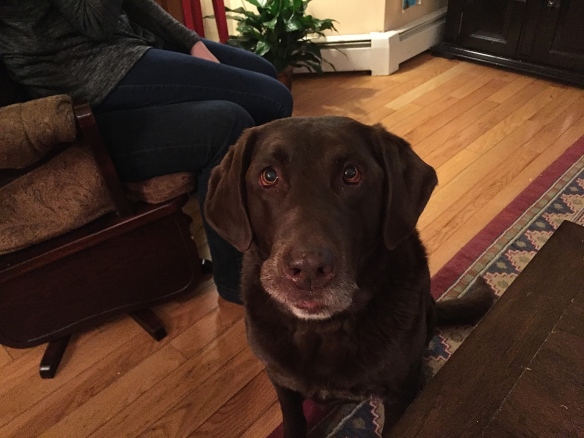 This old guy was on the hunt for food bits.  I was holding up a cheese cracker for this photo. 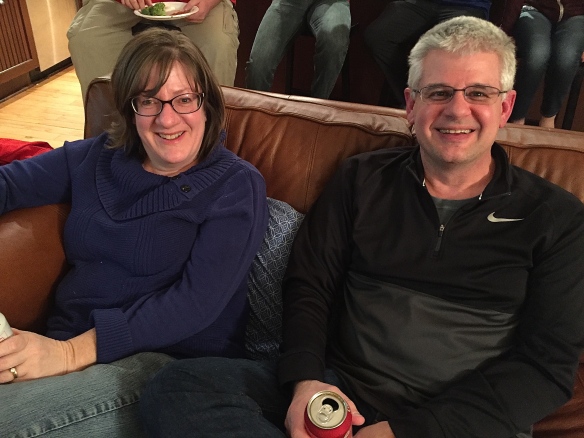 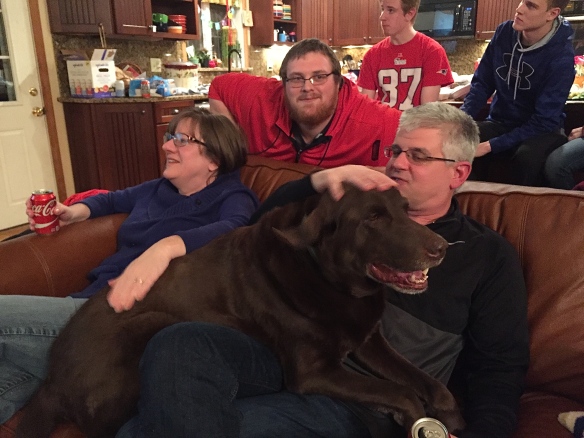 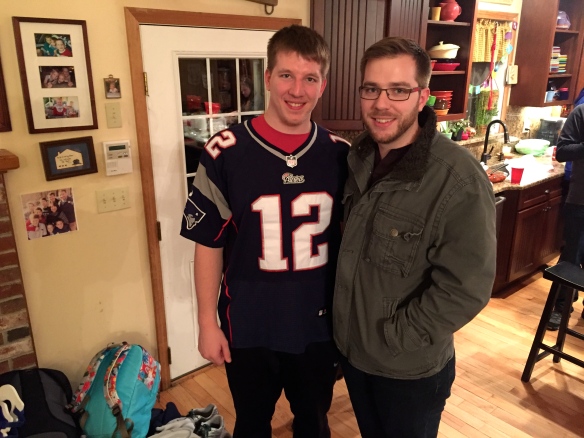 Isaac and Cassandra left at half time so I took a quick photo of my brother and my firstborn.  They look similar, yes?

Playing “open your mouth and let me see if I can throw this cracker into it.”

Well, we all know how the fourth quarter of the game played out.  Caleb, bless his heart, came out of half time with a terrible stiff neck from playing nerf football and wrestling downstairs with the guys, so he had to stay motionless on the couch as he watched the most exciting comeback in Superbowl history.  However, he was able to raise his hand in victory as the final outcome of the game was decided. 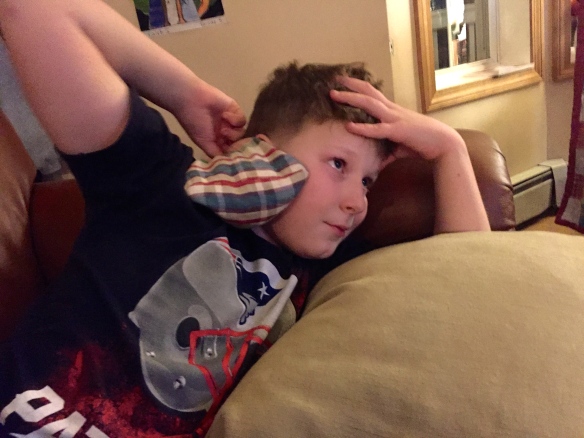 best memories; his face while watching Tom Brady after the game.

And, another photo to add to our yearly Superbowl portraits; 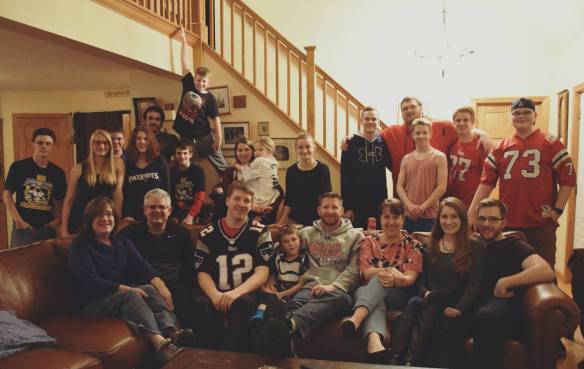 gosh, it was a fun night.

You cannot always have happiness, but you can always give happiness. ~Author Unknown