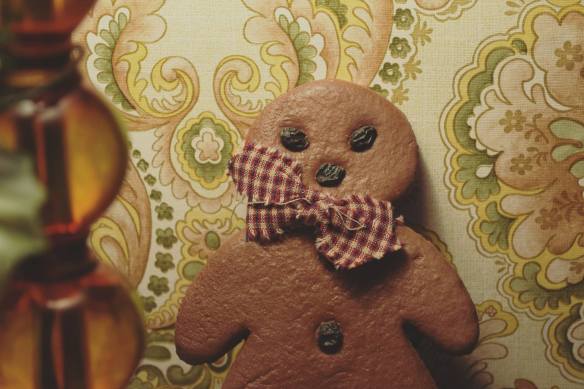 I dragged myself out of my cozy bed this morning to go wake up Seth for school, and wake him up I did, out of a sound sleep.  We came upstairs together to find Caleb in the rocking chair, “There is a two hour delay, mom,” he says.  Seriously, I could have stayed asleep.  Ugh.  But once up, I stay up and I made pancakes and bacon and hugged everyone.  I heard a report from Caleb and Grace that “Sherlock was meowing all morning and wouldn’t stop.  Jacob finally put him outside.”  After the children all left for school I found the cat under the porch, in distress.  “What is wrong with this cat?” I wondered, and then thought to myself, “He did bite Caleb not long ago, maybe he has rabies.”  The more I thought about it the more I was convinced that he had rabies and since he bit Caleb, Caleb naturally had rabies as well.  I called the vet and sure enough, his rabies vaccine had needed updating a year ago.  I made an appointment to take the cat to the vet and also put in a call to the pediatrician to let them know Caleb was bitten by a cat that didn’t have his shots up to date and probably had rabies but I didn’t know because I was on my way to the vet with the cat.  I had to leave a message and left to travel to the vets with my sad cat.

I was crying when I explained to the technician that I feared that my cat had rabies and that he had bitten my son.  She quickly left the room to send in the vet, who came in saying, “Sherlock was vaccinated for rabies in the past and there is no way he can get rabies or pass rabies on to your son especially since it has been over two weeks since he bit your child.”  She felt Sherlock all over and announced “Oh this is his problem, your cat cannot pass urine, he is blocked.”  So I cried some more and tried calling my husband to ask him what to do and if we could spend 800 dollars to get Sherlock on the road to recovery.  Rich grew up on a farm and values all living creatures, but only to a certain extent.  ha ha.   Providentially for the children and I, he did not answer his phone, so I called my son Jacob, who after all is a man now.  After talking it through with Jacob we decided to go ahead and get treatment for our cat, as the only other option according to the vet would be to put him to sleep.  All of us love Sherlock very much and since he had a sickness which could be treated, we decided that even though it would cost 800 dollars we felt responsible for his care and knew that in this instance it was the right decision to help our dear pet, after all he probably only bit Caleb because he was grumpy about his condition.

I drove home without Sherlock, who was being busily sedated and catheterized by the vet and her assistants to remove his blockage, which, as explained to me, was a multitude of crystals in his urine that had built up over time.  In fact, the vet was a dear older lady who became a vet later in life after her own cat had the same condition.  She told me that she was so impressed by her cat’s vet that she decided to become one as well.  She was very nice, I liked her a lot.  I’m wondering if now I will become a vet, too.  😉

I came home and ran 2 miles on the treadmill while texting my brother Dave in order to settle myself down again.

I am now sitting cross legged on my bed attempting to blog about Grace at the Christmas house.

Grace is part of the Madrigals singing group at her school and they dress up in victorian clothing and sing Christmas carols a cappella in exquisite harmony at many different venues.  They were scheduled to sing at a lovely decorated museum on Saturday so I went and took Sarah with me.  Rich came a little later, as well.

I loved the wall paper.

There were decorations everywhere, and a little gift shop in which Sarah spent a few dollars on matching Menorah necklaces for herself and her sister so that Grace, “would never forget me.”  She said this with such sad eyes that Grace quickly told her “I could never forget you, Sarah, you’re my sister.” and then I cried a little.  It was one of those moments. 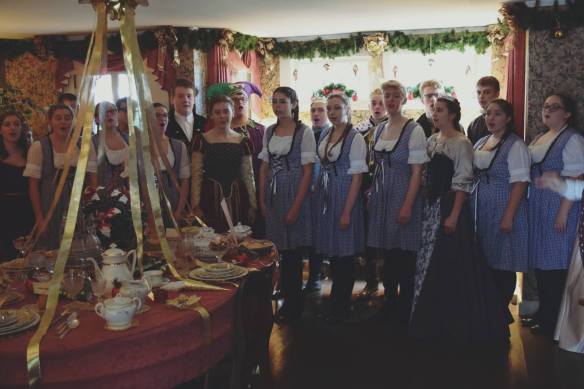 The acoustics in this room were divine. 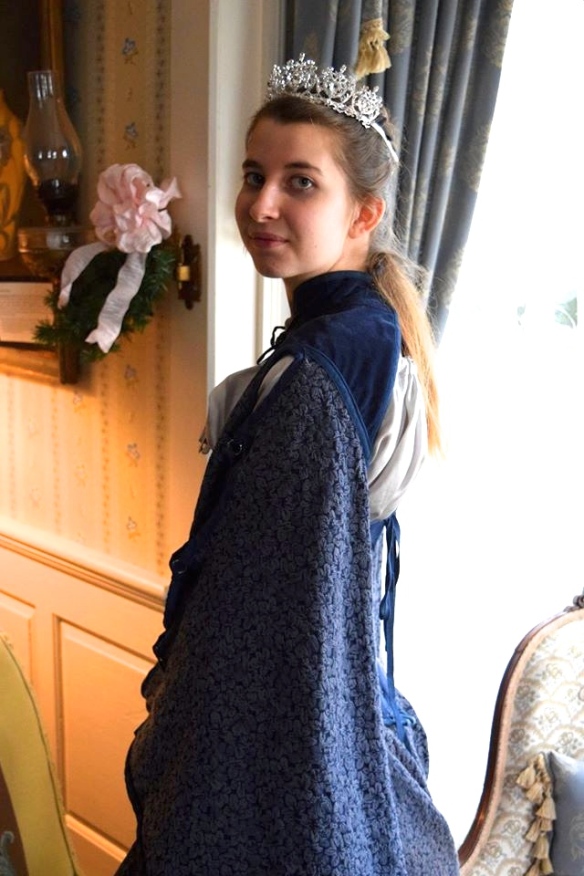 When they were finished with their performance, I took a few photos of Grace who was dressed so beautifully.

She was the queen. 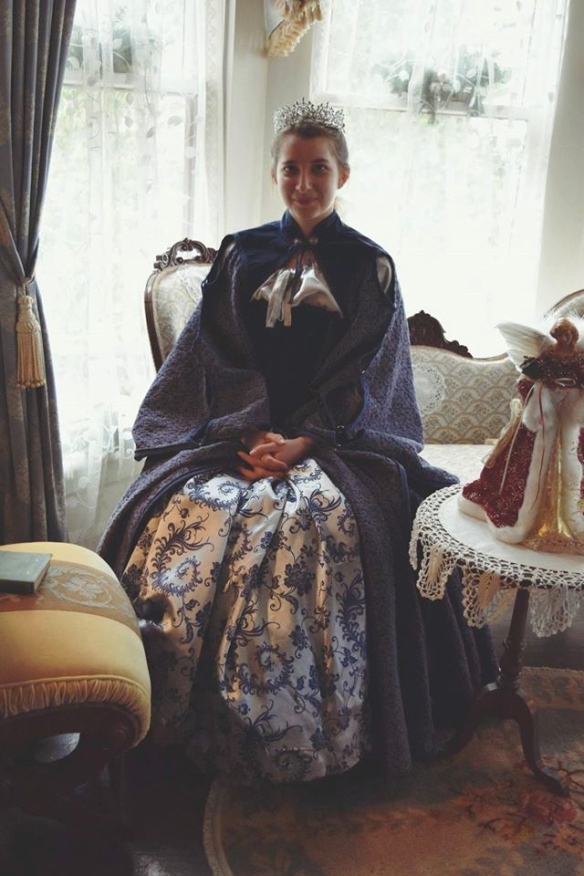 There was an older gentleman in the room watching us who invited Grace to sit on the couch (museum furniture is not typically to be sat upon) for a photo. 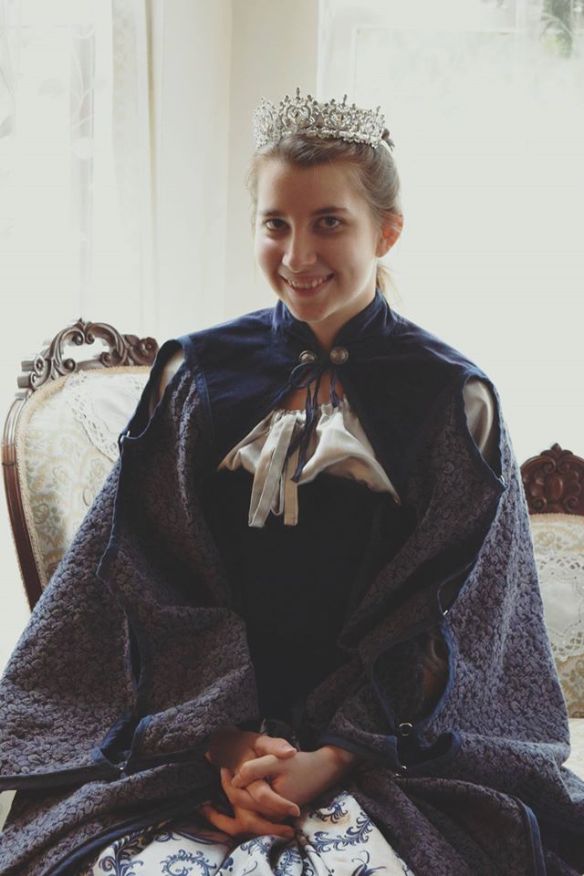 The music director’s daughter MADE this dress for herself when she was the queen in high school. 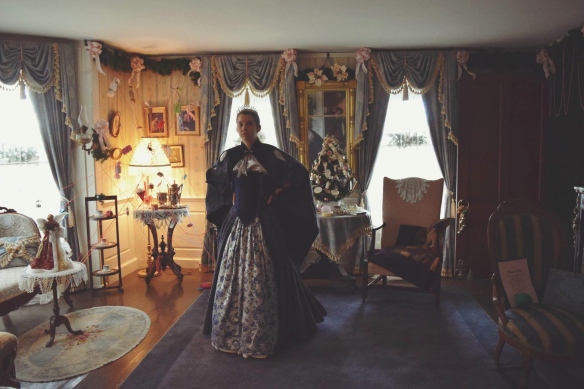 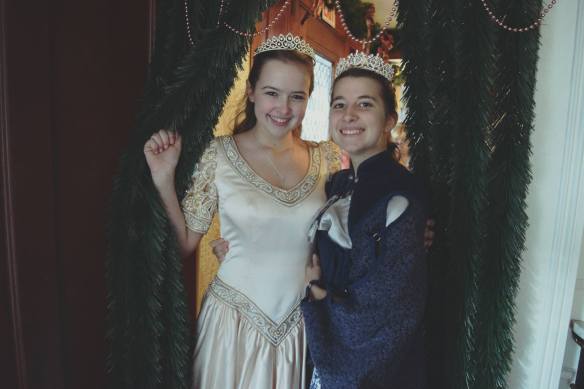 Grace with her friend, who was coming to get her for a group portrait outside in front of the house.  I gave the camera to Rich and asked him to try to get a picture of them for me while I went to go help Sarah with something.

And this is what I recieved: 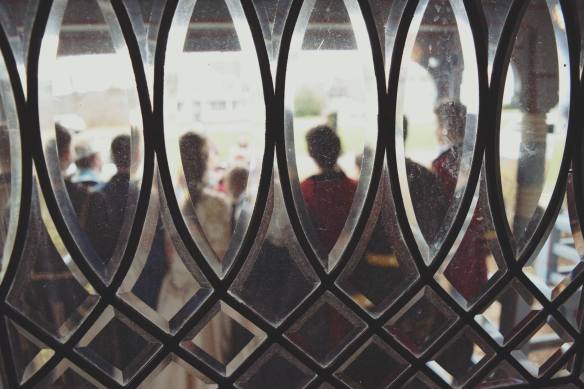 look now! for glad and golden hours
come swiftly on the wing.
O rest beside the weary road,
and hear the angels sing!

7 thoughts on “grace at the christmas house”