Good afternoon!  I took David to the orthodontist this morning which was nice because (does this happen in your family?) as is typical, the car is the best place for my children to open up and talk.  We have nice conversations about anything and everything.  So I got to hear everything that David wanted to talk about.  After his appointment (“What did they do to you Dave?”  “They put in a new, thicker wire.”) we scooted into the Goodwill store quickly to look at 1) dishes  2) DVDs and 3) books.  Then….Dunkin’ donuts for a snack.  He got a mint hot chocolate and a breakfast sandwich on waffles.  I got a snack sized breakfast wrap thing and a hot tea.

I dropped Dave off at the middle school (right before he got out he said, “Wouldn’t you rather just take me back home?” and I said, “No, get out.”) and then parked so I could walk and as I walked I talked to my friend Kathy on the phone, and sipped hot tea.

This weekend’s great event was getting up super early in the morning (4), and leaving to drive three hours for a visit to our college boy.  Rich and I took the younger children with us, but Jacob had work so he wasn’t able to come along.

We were in terrible moods for half the trip.  It was dark and raining and we had to stop at every red light on our way to the highway, which was driving Rich crazy because we were literally the only ones on the road.  We also couldn’t figure out how to get the new DVD player in our vehicle to work but eventually David figured it out and the sound of Looney Tunes filled the air.  About an hour down the road we all started perking up.  We left so early because we wanted to surprise Ethan by getting to him in time to take him to breakfast.  He wasn’t even awake yet when we pulled up to his dorm.  The dorms are kept locked so I called him on his cell phone to tell him we had arrived.  We saw his light turn on behind the blinds in his window as he quickly pulled on his clothes and came out in the chilly rainy weather and into the family car, where we all smiled at him.

We ate breakfast at a very nice, casual place, filled up with nice ordinary people.  We felt comfortable and happy and our waitress was capable and pleasant as well.  I ordered steak and eggs.  We all ate so much food that we were able to completely bypass lunch.

After breakfast we went for a little drive and then stopped at a Norman Rockwell museum. Next up was bowling.  We also visited a bookstore in town which was great (used bookstores are my favorite).

We headed back to the college.  Grace and I sat and read our books for well over an hour.  The college kids had an event going on where you could get an empty Pokemon character and stuff it yourself to make a stuffed animal, it closed with a zipper in the back.  It was so cute to see all these big college kids sitting around boxes of stuffing, not unlike sitting around a campfire, talking away as they made toys, of all things.  Seth, Sarah, and Caleb managed to each get in on the action, too.  The college kids were so nice to them.  Grace and I would look over at them and then look at each other and smile little smiles of joy.  Rich and Ethan played pool downstairs together, and David joined Grace and I and put his head down on the table to take a nap.

We began to get hungry so we left for an early dinner.  (It was so rainy and chilly–39 degrees!) Ethan was craving pizza so we found a well-reviewed pizza place 20 minutes away which ended up being amazing.  The place was a very low key, “hole in the wall” sort of place with an awesome view of the town and the train tracks.  Very busy.  You had to order at the counter and then sit down to wait for your pizza to be done.  When it is done they call your name and you go up to get it (no waitresses).  There was a lady at the table next to us who talked to me about our large family.  We rarely get the comment “are they all yours” any longer.  We used to get it all the time when the kids were small, but now that three of them are taller than me we don’t get that question as often.  But she loved the kids and it was a friendly little conversation.

The pizza was incredible.  Their most popular pizza was made with their garlic knot dough and was simply covered in garlic, I think it took a full 24 hours for my breath to get back to normal.  I had two pieces of it, it was topped with tomatoes and cheese.  We bought three large pizzas and simply stuffed ourselves until there was only one and a half pieces left and Rich said, “No more, the rest is for E to take to his room with him.”

Then it was time to drop Ethan back off at his dorm.  There were tears shed but all in all it was a most pleasant day!  Beautiful.  You know, there is just nothing like the feeling of being safe and loved in your family.

Rich had to take it twice.  🙂  family photo at the breakfast place!  Isn’t the decor great?  I love rooms that are filled with stuff everywhere you cast your eye.  Inside the well-decorated bathroom there was a sign which said, “Girls, PLEASE do not steal the decor!”  The word please was underlined three times. 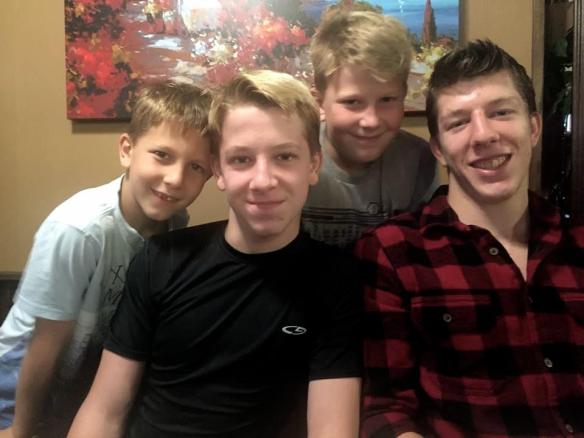 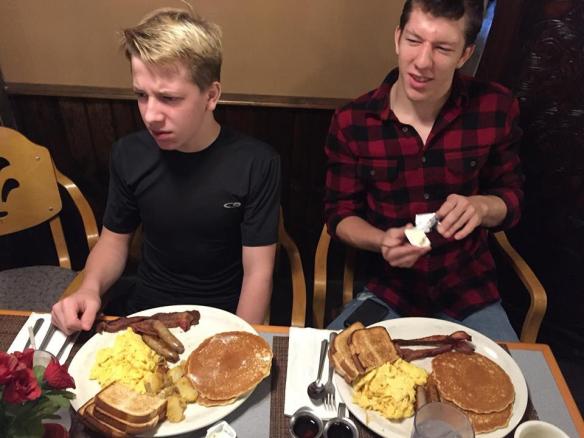 I’m laughing as I look at it.  Their breakfast was called the “gut buster”

We went to a Norman Rockwell museum, which was a building full of every cover and/or illustration that he ever did, plus little signs giving more information about his life and pictures.  There were NO original works, but we have been to the real museum in Stockbridge so we were okay with seeing the many many prints. 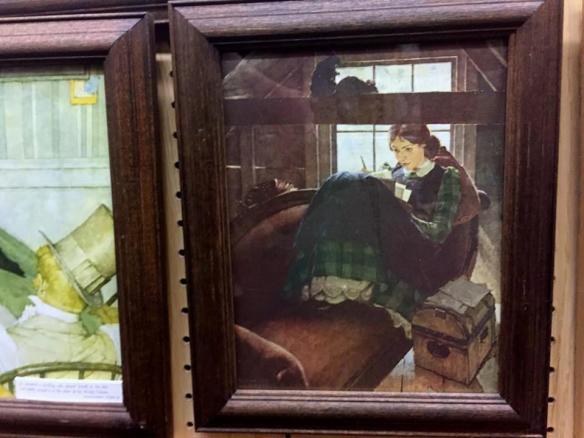 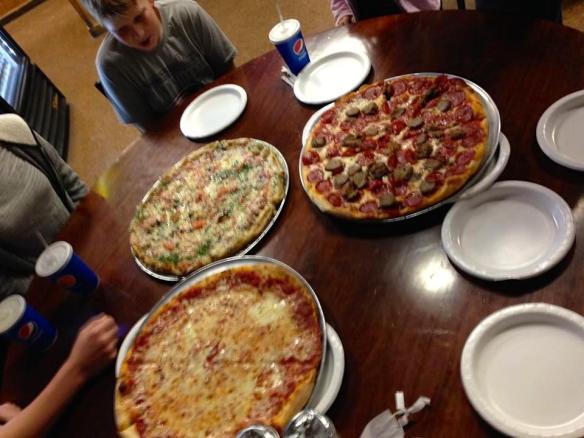 The pizza was so good.  Rich even said it was better than Grandes.  (the place we go to “back home” all the time, which we’ve been going to for our whole married life).