This was more of a gardening problem.  I didn’t even plant the pumpkins but we were thrilled (the children and I) to find them growing in the garden.  My mom is the expert pumpkin grower so I texted her the other day to ask when it was that you picked the pumpkin.  We had one that had been orange for a while and two that were still green.  She told me that if I started rolling it, it would break away easily from the vine so I went outside to roll a pumpkin.  I was so excited.

But when I rolled it I was confronted with a ghastly sight of a family of grubs living underneath.  One of them stayed attached to the pumpkin and I quickly flicked it away, far away out of sight.  It appeared that they were eating the pumpkin as much as their tiny little mouths would let them. 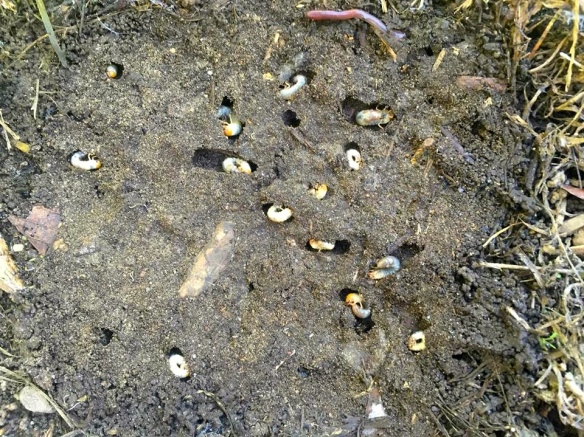 “Oh, I don’t like that name, either. I shall call it–let me see–the Lake of Shining Waters. Yes, that is the right name for it. I know because of the thrill. When I hit on a name that suits exactly it gives me a thrill. Do things ever give you a thrill?”

“Well now, yes. It always kind of gives me a thrill to see them ugly white grubs that spade up in the cucumber beds. I hate the look of them.”

“Oh, I don’t think that can be exactly the same kind of a thrill. Do you think it can? There doesn’t seem to be much connection between grubs and lakes of shining waters, does there?”

The pumpkin did break away nicely from the vine and I carefully lugged it over to the hose to wash it off.  I wondered if the grubs had eaten holes through the rind.

After a wash, I cautiously pressed my finger all over the blemished side of the pumpkin and discovered that it was still hard without any soft spots or holes.  I sent photo after photo to my Mom and she was just as grossed out as I was, if not more.  She suggested throwing the whole thing in with the chickens to enjoy.  After all, what if the entire pumpkin was crawling with grubs?  “I wouldn’t want to see what might be inside it.”  she texted, “It’s like a little nightmare for Halloween.”

Like any loving chicken keeper would do, I did go back over to the grubs and scoop them up along with a worm.  I threw the handful of dirt n’ grubs into a bucket and carried it down to the coop.

They were gone in no time.

By the way, grubs are the larvae of Japanese beetles.  And guess what else I learned?  Moles  are the natural predator of grubs and only live in lawns that have them.  They eat up to fifty grubs a day.  If you have a lot of moles in your yard, you have a lot of grubs.

So anyway, what to do with the pumpkin? 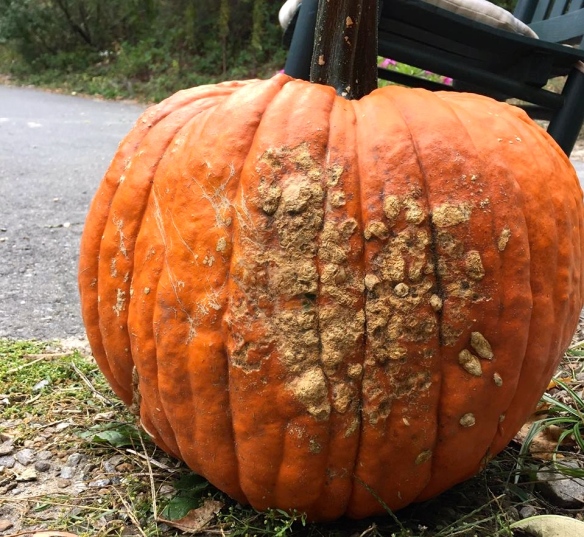 This is what the grubby side looks like today.  Scratchy and rough, I’m keeping an eye on it for any spoiling.  So far, so good.  It’s our very first *we grew it ourselves* pumpkin! 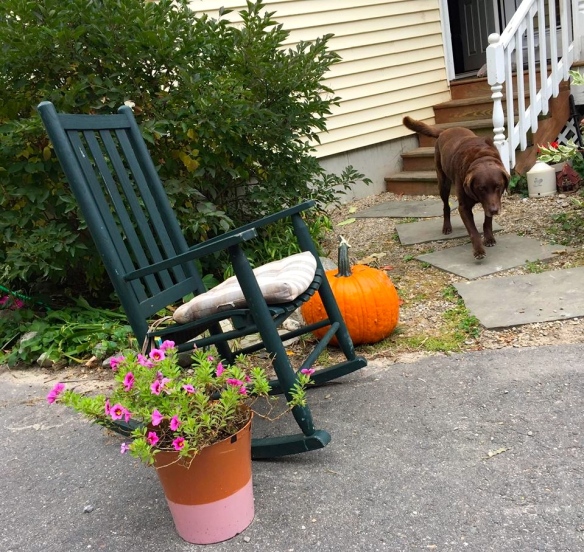 It still has a pretty side and so I decided to place it by the walkway near the house, next to the rocking chair.  I like to sit and wait for the bus and/or watch the kids play while sitting in my chair.  Every once in a while I give the pumpkin a loving pat, or use it as an end table for my phone.

I would rather sit on a pumpkin and have it all to myself,
than be crowded on a velvet cushion.
Henry David Thoreau

4 thoughts on “the grubby pumpkin”