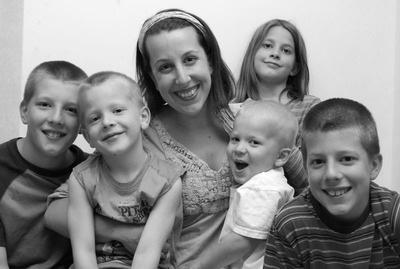 Peace is not the absence of conflict, but the presence of God
no matter what the conflict.

ahhhhhhhhhhhhh, home again.  And I worked like a machine yesterday getting this house on the pathway to order and cleanliness so I’m going luxuriate in a morning of blogging (a ridiculous word of which my definition would be: play with pictures, put my thoughts in order, type, enjoy the sound of the keys clacking whilst three cats sleep on the bed at my feet and the cool morning sun shines through the curtains). 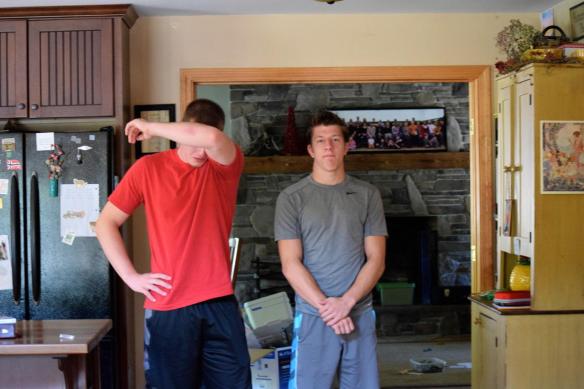 My children have beautiful souls. 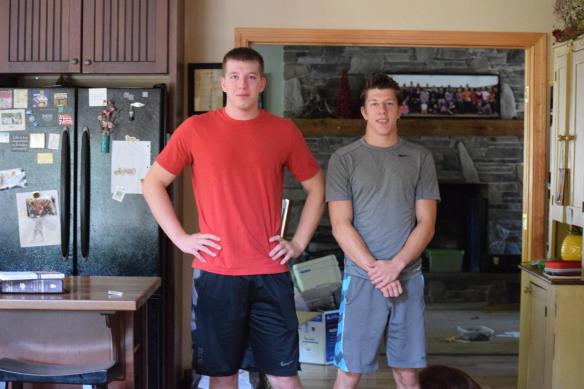 I took these photos on Thursday, right before we left to take Ethan to college (three hours away).  Jacob wasn’t able to go with us and had to say goodbye to his faithful sidekick of eighteen years.  They are brothers in every sense of the word. 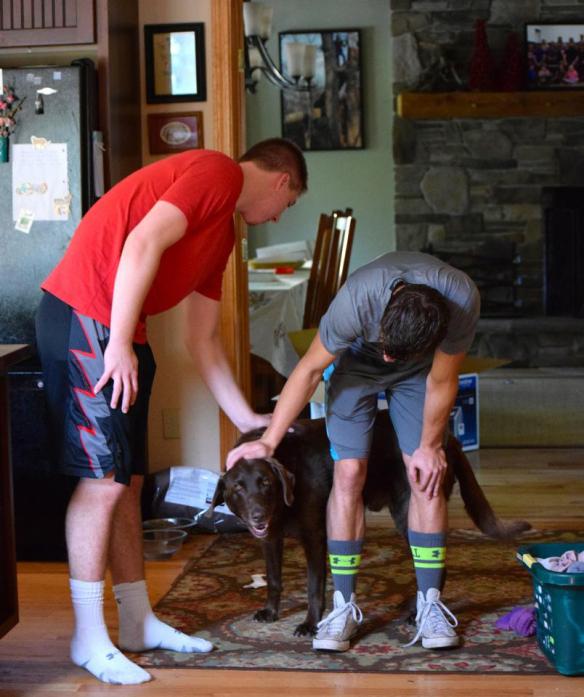 And look who was at his boys’ feet.  Another faithful friend.

Speaking of which, when we were gone the dog Parker fulfilled a lifelong dream; he killed an animal.  We all know this was a dream of his because he has had to make do by busily “killing” the children’s stuffed animals all these years.

This summer, not only have I had to spend time with the smells of six boys, but also a stinkier than normal skunk.  This skunk sprayed Parker about a month ago and Parker has vowed revenge ever since.

Well, the skunk would periodically wake us all up out of a sound sleep in the very early morning hours.  The smell, like the gray of the morning, was everywhere and very depressing.  We cursed the skunk.  Little did we know, Parker had a secret plan (secret, only because he cannot talk).  If he could talk he would say, “No worries, family, I have a plan.”

And it came to pass, while Rich and I were away with five of our children and crying over leaving a sixth at school, that we were notified by the seventh that “Parker destroyed the skunk.”

We were elated and I was determined to bring our good dog home a treat.

Even though three healthy and strong young men (Jacob, Michael P. and Ethan S.) knew of this “destroyed” skunk, they all decided to IGNORE it and LEAVE it to fester right by my house…..and as a result, as we pulled into the driveway Sunday evening, our happiness to be home again was shattered as the smell of skunk PLUS rot filled our beings.

How to make a man rage: put him in charge of cleaning up old destroyed skunks.

WHAT DO YOU WANT ME TO DO WITH IT THEN????? He yelled, ferociously.

“You have to bury it in the woods!!  That trash can will never be the same again if you leave it in there for two days!!!”

So he pushed the can over with all his might (to remove the skunk?) and did what I told him to do.

We didn’t exchange words for the rest of the evening.

My point being…….the entire house was nasty.  The smell of skunk had permeated everything.  The only thing to do was clean, clean, clean.  I had to get rid of the smell.

So, on Monday, not only did I take Caleb to the dentist and go grocery shopping, I also:

hosed down the walkway outside, twice.
washed all the bedding in my room (the window had been open).
washed the couch off with leather cleaner wipes.
Grace washed the stinking dog.
We spent the entire day putting him outside.
He spent the entire day finding a way back inside.
I took all my sewing stuff out of my room and packed it away (which had nothing to do with the skunk…but the smell drove me to do things I hadn’t planned on doing, I was out of my mind).
I hired maids to come on Friday to clean and encouraged Jacob to contribute to the cost.
I made the children clean their rooms with threats.
I put clean sheets and bedding on Ethan’s bed.
I did 1,000 loads of laundry.
I spent hours in the kitchen, making tomato sauce, and a nice dinner (good smells to replace the bad one)
Grace cleaned the bathroom with Pine-Sol “Something smells like A1 sauce” said a small child.  (I rejoiced! He didn’t say skunk!)
Every single garbage can was emptied from every room.
We opened every window and turned on every fan for the entire day.

By the end of yesterday I was tired to the bone.  Rich and I had made up via texting and we went on a date to Rita’s while Seth and Caleb were at football practice.

All in all, the skunk situation did wonders in channelling my busy mind into thinking of other things besides the fact that my family seems to be shrinking and I made enough meatloaf to feed a small army when I only had 6 mouths to feed (three of which don’t even like meatloaf).

I am reluctantly thankful for the skunk.

Grace is now a senior in High School so here we go again with the heart pulling and tugging.  I’m not complaining, mind you.  It’s just….so true…that life goes by fast, there is no stopping the merry-go-round.  Sometimes it makes one nauseous.  But most of the time it’s fun. 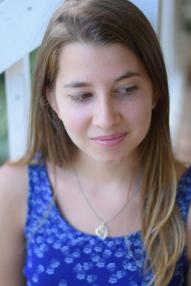 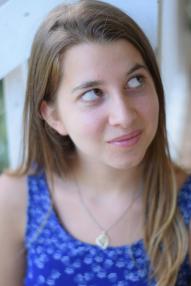 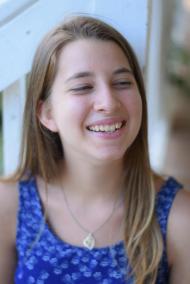 She left yesterday afternoon to go with her boyfriend’s family to drop him off at basic training.  He is going into the Coast Guard.  She looked so cute as she waited that I did a mini photo-shoot with her on the porch. 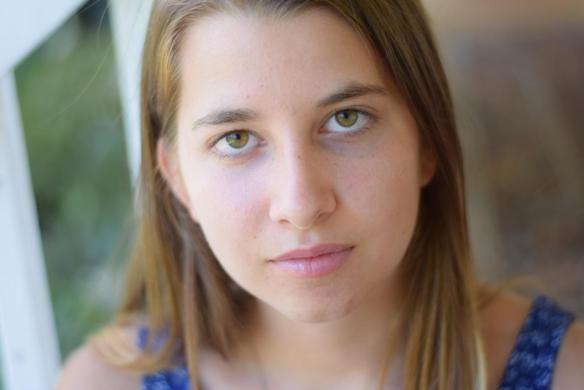 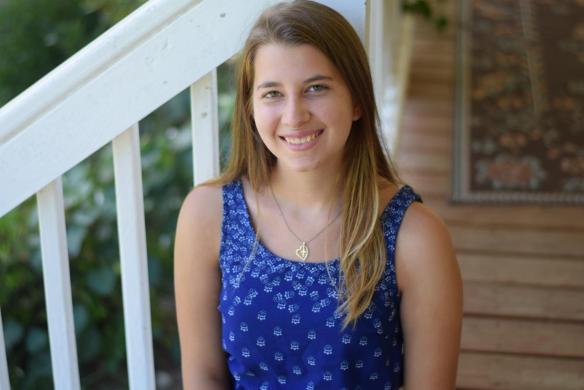 I love you, Grace!

And I love all my friends who visit me here.
Happy Tuesday!

8 thoughts on “a skunk tale”