The most fascinating thing happened to me today.

I spent the entire morning in the house after Jacob left, cleaning and what-not, all alone.  Aunt Phyllis called and I talked to her for 40 minutes with no interruptions.  I wrote someone a card and mailed it and glued some of Joanna’s pictures into my scrapbook.  The house was so quiet.  I was in my own little world.

I ate lunch on the porch and read a chapter in my book.

Well then, I decided to go check on the chickens and I took my camera with me.

With all seven of the children gone away at school I was in awe and wonder at how much I could see, hear, and smell while I was enjoying the walk.  My senses were in tune with nature like they haven’t been in years.  While the children were home, even when I did go off for a walk alone, there was always that instinct to keep listening toward the house…to be ready to go back at any moment.  To not be gone too long.  A little guilt for not taking anyone along.

I went past the coop and stood under the trees on the edge of the yard.  It was a hot and buzzing time of day, approaching high noon.  The air was sweetly scented like grapes, ripe bunches of concord grapes were hanging from the trees.  I sat down and then stretched out flat on my back to close my eyes and listen, to relax, to let the sun bake into my face.  I was under some dappled shade, even with my eyes shut I could see movements of warm light as the wind blew through the leaves.

After a while I got up to continue walking……I admired some yellow wildflowers and smelled deeply of them.  I saw a grasshopper in the mowed yard, it had a hard time jumping off the clipped grass so I gave it a hand.  It used me as a springboard to jump amazingly far.

I was noticing everything I possibly could.

Then, as I walked up the dam trail, I thought to myself, “There are no animals.  All these trees and bushes and I can’t see any sign of life anywhere.”  I felt disappointed.  I wondered what walking through the woods was like long ago, did people see wild animals more often?  I’m sure they did.

I came to the top of the trail and stepped carefully over the mole tunnel which is always there.  Then, Jesus prompted me to look up.

And what do you think I saw?

I saw a black animal up in the top of a tree which was approximately 40 feet high.  It was slowly reaching out it’s little hand to pull some food to it’s mouth.  It was amazing, I had never seen such a thing before.  I usually see birds in trees and an occasional chipmunk.  My first thought was “raccoon” but a half a second later I knew I was mistaken, but what was it?  I kept watching, with my head tilted way back and my hand shading my eyes, then I realized that it was a porcupine.  My very first porcupine sighting but I had heard rumors of one about.

I say it is Ethan’s porcupine because just the other day he was on his way home from soccer practice and he saw one cross the road in front of the car and go down the bank by the stream.  He tried to get a picture of it but it looked like nothing but a dark dark shadow in it.

I’m sure the one I saw today was the same one.  I love it!  It appears full grown, healthy and strong.  My only hope is that 1. It does not like chickens, and 2. it stays away from our lawn, our children, and our dog.

I stood and watched it for a long time.  It did nothing but very slowly eat little bits of tree and then, after it noticed I was there, stare at me.  It stared at me in silence but when I broke the silence by talking conversationally he was so uncomfortable he looked away into the woods.  It never made a peep and didn’t move up or down the tree the entire time I was looking at it.

I took about 100 photos but because of the bright sun I wasn’t able to really see how they were turning out.

After a while I thought I better go home.  I didn’t have my iPhone with me and wondered what time it was.

I crossed the stream but didn’t see any crayfish.  My chickens saw me and clucked.

I walked by the pond and noticed some stuff under the playset and gathered a pair of socks, a water bottle and a plastic horse.

I walked up the hill to my house with my hands full of the stuff.  Parker the dog walked over to the front steps to greet me.

“I saw a Porcupine,” I told him, out loud as clear as day as I walked up the steps.

Then I noticed two men sitting at my little porch table and screamed bloody murder.   I’ll never forget the looks on their poor faces.  As they heard me talk to the dog, believing I was speaking to THEM, they looked at me in friendliness, and then as I screamed, I caused looks of surprise and shock to replace that kind friendliness.  “I was talking to the dog,” I explained.

They quickly told me that they were the granite guys coming to fix our countertop.  They had made an appointment before our vacation to come out on September 1 at noon.  It was one o’clock.  And I had completely forgotten.  One of them mentioned they were glad I didn’t have a gun or I probably would have shot them in my terror.  Thankfully, I only shoot photos.

Nicest guys though.  They just finished up.  I showed one of them the pictures I took of the porcupine, since he had overheard my conversation with the dog and all.  I’m not sure if he was as impressed with it as I was but he was very polite. 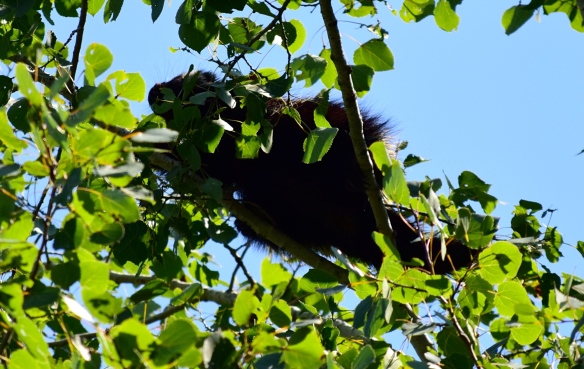 This was the first picture I took of it, before I knew what it was. 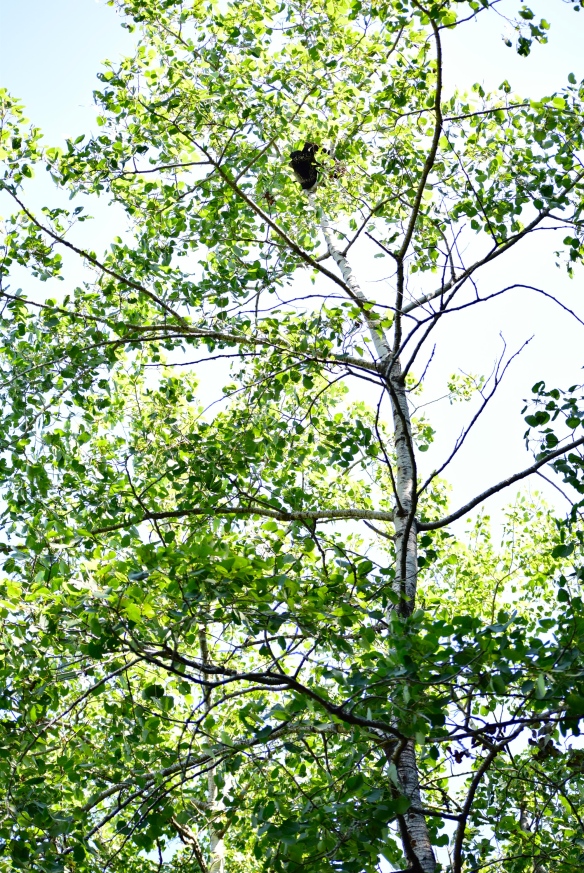 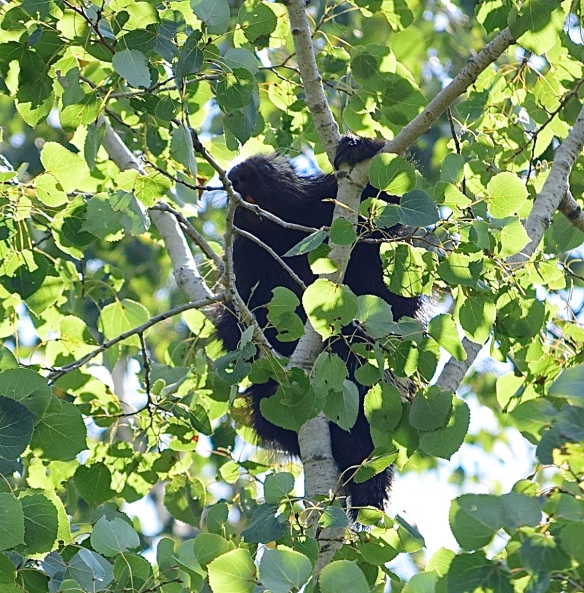 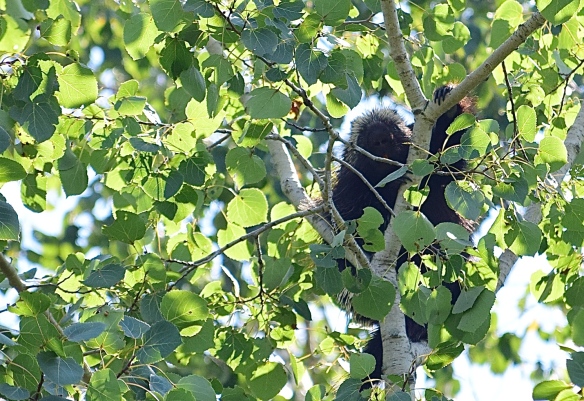 It was thrilling to see these pictures inside the house.  While I was outside I never was able to see the eyes of this creature.  As you can see, he kept them on me at all times (except when I spoke and he looked away).

It looks quite like a rodent, doesn’t it?  That’s because it is from the rodent family.  It’s the second largest rodent in North American, behind the beaver.

I got this information from wikipedia, “The porcupine is the only native North American mammal with antibiotics in its skin. Those antibiotics prevent infection when a porcupine falls out of a tree and is stuck with its own quills upon hitting the ground. Porcupines fall out of trees fairly often because they are highly tempted by the tender buds and twigs at the ends of the branches.” 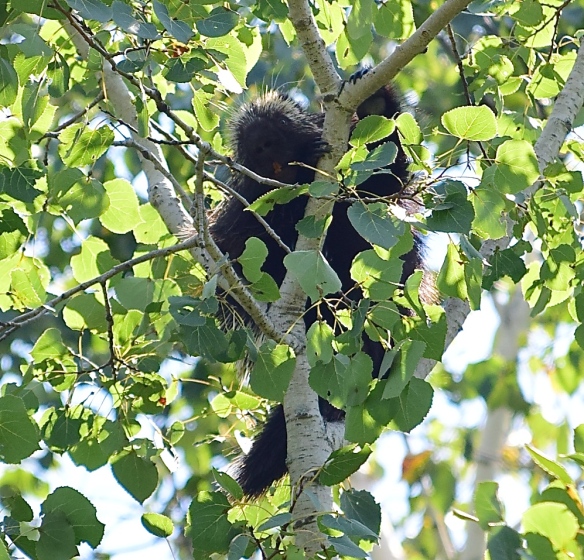 It had teeth as orange as cheese doodles.  As I have always been interested in teeth and dentistry this was quite fascinating to me.  Imagine having orange teeth.  Looks to me like it has a slight underbite, as well. 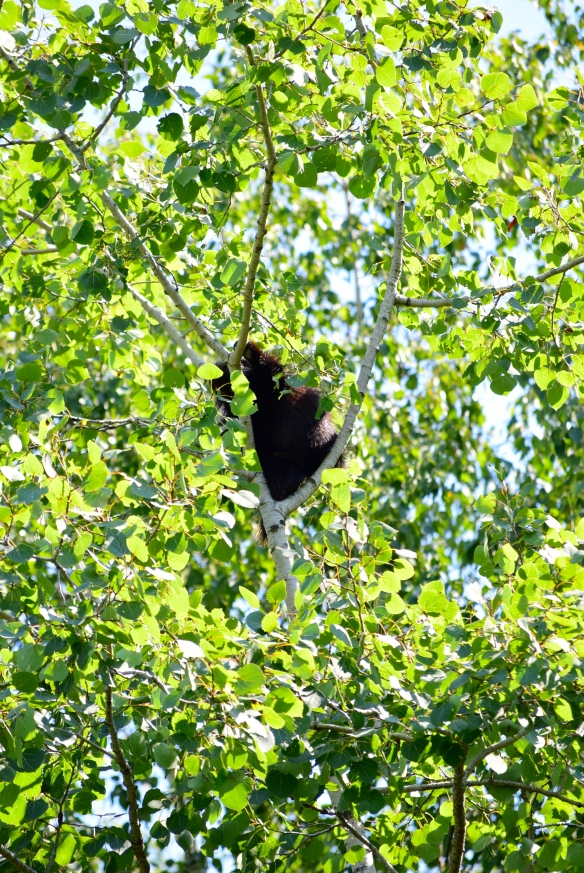 The kids should be home soon and I bet they’ll want to run right back to see if it’s still there.

5 thoughts on “teeth the color of cheese doodles”