Hundreds of dewdrops to greet the dawn,
Hundreds of bees in the purple clover,
Hundreds of butterflies on the lawn,
But only one mother the wide world over.
~George Cooper

“I wish you were here so you could make pancakes for us,” I teased my Mom yesterday morning when I called her.

“Guess what I’m doing right now?” she replied,  “Making pancakes for Isaac!  Did you know he came out?”  We laughed, and I knew she was having a great mother’s day already because she got to cook breakfast for one of her boys (she has three of them, and two girls–one of whom is me).  We had a nice little chat talking of the children and the gardens and then hung up so she could go eat some pancakes with Isaac.  I don’t get to see my Mom as much as I would like, but I think of her constantly, especially while I am busy in the kitchen, or in the garden planting peas and flowers.

We went to church yesterday morning and had a great service listening to Wally give a missions presentation and then Gary preach the Word.  After church I said, “Since it’s Mother’s Day, all I want is one nice picture with you children.”  Rich happily agreed to take the photo in front of a very cool black car that he and the boys loved……. and you would think I would have learned by now that what I end up is not quite what I was hoping for or picturing in my mind.

This was pretty good, however we are all missing our feet…..but it was hot and we left to get some lunch.  Everyone was hungry and everyone had an opinion about where we should go.  The Chinese Buffet?  Crackerbarrel?  Again I brought up Mother’s Day so I could stay out of it.  I would sit and just wait to see where Rich (who was silent through the discussions by the children) would take me, the mother of his precious, well-taken care of children.

I held my breath as we pulled gently into…..MCDONALDS.

“Rich you’re just trying to make me scream but I’m not going to.”

“What??  They have a really great burger here that I loved.  I wanted you to try it.” (laughing)

“Right, because I eat carbs!” (NOT screaming)

Lots of laughter ensued as he had the audacity to park the car.  Roll with it, I decided, roll with it with humor.  Then I realized, wait… no drive thru?

You have to understand as a family of nine, we rarely eat inside of any fast food place.  And if we do, it’s usually Wendy’s……not mcdonald’s.  Also understand that we have a Mcdonalds in our hometown so I am there several times a week to get something for one or two of the children as we rush off to go to sports events and such.  It’s “old hat” that place, basically one step up from going back home to eat leftovers from the fridge.

Yesterday we had an extra kid with us, so we were a family of 10.  The sun was shining, the sun was hot, and we all were fooling around as we trooped inside……. MCDONALDS….was this a dream?   🙂

Turns out McDonalds is pretty awesome for a Mother’s Day luncheon because…..no one is there!

We spent 72 dollars on food!  Rich almost died and I laugh when I remember what his face looked like as he studied the receipt to make sure it was right.

I sat across from Sarah and Rich, Grace was down sitting in a booth with David and Caleb.  Jacob and Ethan were sitting with Zac. 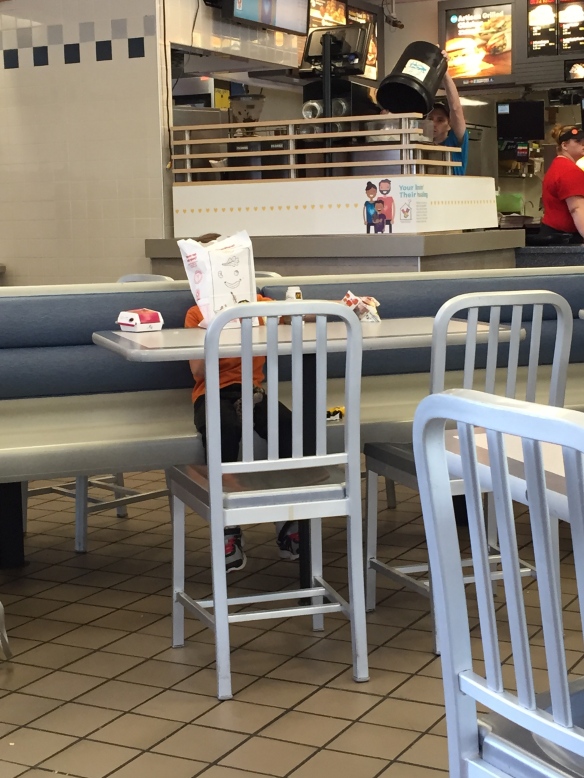 Meanwhile, Mr. Highly Independent sat away from us, over at his own table.  He sat there the whole time, working away at eating his lunch and paying no attention to us.  Rich and I kept saying to each other, “Look at Seth.  He’s so so cute.”

Poor Rich was the last to get settled and eat, but had to get up yet again to get himself some ketchup for his fries.  Jacob, who was already eating away at his nuggets and is 18 years old, asked his Dad to get him some ketchup to which Rich replied impatiently, “GET IT YOURSELF!”  He was feeling a bit frazzled.

The soda and food started kicking in.  I ate my burger while carefully peeling off the bun as I went along.  Soon I was left with a box of bun bits.  “Does anyone want the rest of my burger?”  I asked, just to be funny.  Rich carefully selected a piece and threw it behind him to hit one of the boys.  He did this several times. 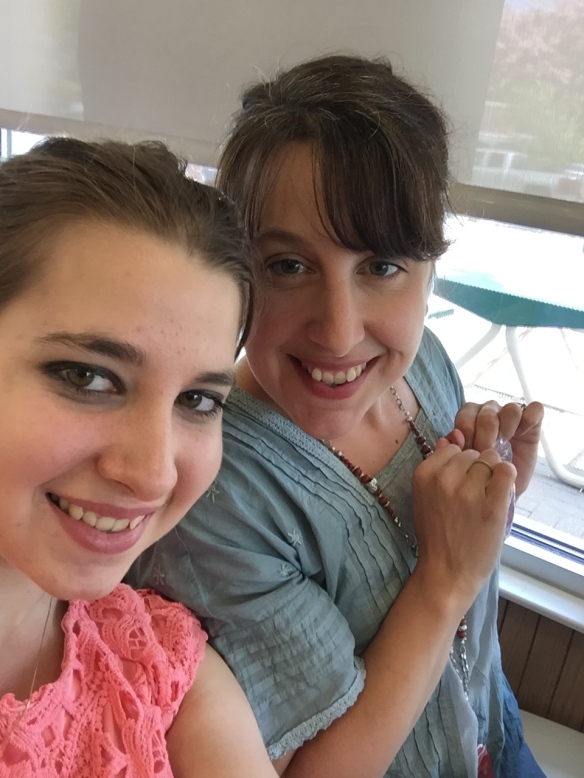 Grace took this selfie of us.  I was busy straining and trying to open Sarah’s toy.

“Okay, times up, let’s go!”  Rich announced after most of us were done eating.  “The bus is here!” Jacob replied, which caused all the school kids to get up, throw away their garbage and hustle out to the car (bus).

On the way home Rich said something that accidentally hurt Ethan’s feelings and Jacob said, “Don’t worry, E, I know what you can do to get back at him……”

“Ask him to get you ketchup!”  I interrupted, and we all laughed again.

(Incidentally, I cannot handle caffeine lately.  I drank a very small bottle of coke a week or so ago at about 7:30 pm and I didn’t sleep that night until 2.  Then, yesterday I drank half of my small diet coke and got all nervous and jittery from it.  So now I’ve decided I won’t drink it anymore and I will only drink half-caf coffee.)

Well, we got home and I asked Rich if he could take one more picture of me and the kids and this time to please not cut the feet off.

So I get this:

Seriously!  I got my phone back and there were about 35 pictures of just our legs and then this one: 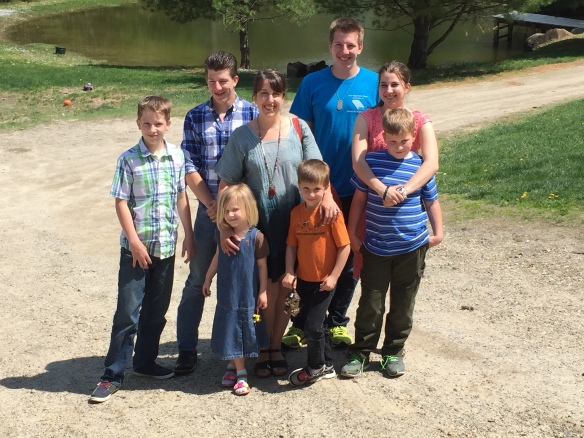 We went in the house…home, finally home…it was like 2 at this point.  Rich and I crashed into bed not meaning to actually take a nap, but we did and it was glorious.

When we got up we had to take the boys to the mall. 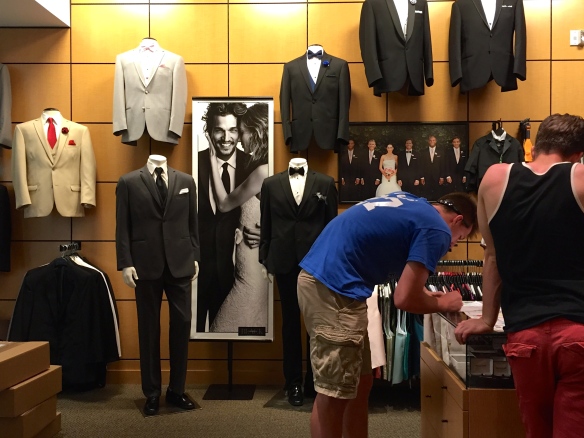 Jacob is going with Emily, who is a Jr.  (it’s the JR prom, our school doesn’t have a SR prom)

Ethan is going single.  Oh they are going to be so handsome in their tuxes.  Stay tuned!

Leaving you with this picture that Sarah drew me.

9 thoughts on “laughing all through mother’s day”