At the true beginning of the day, as is typical, I got up to drink that first cuppa, and get the children off to school.  Sarah’s face was hot with fever, so as soon as the children left for the day, I gathered up my journals, books, drink for Sarah, cool washcloth for Sarah, and settled down to spend the entire morning next to her.  When she’s sick she feels so much better with me close by.

I finished writing a note to a friend, addressed it, stamped it, and the phone rang.  It was 7:30 in the morning and the school nurse was calling to let me know that Grace was in her office, with problems with dizziness.  She said it had happened the night before as well, so I quickly woke up Myriah (our lovely houseguest for the week) to watch Sarah for me and pulled on my sneakers to get Grace.

These headaches/dizziness/vision issues have been going on for several years.  They happen probably about once a month, but Grace’s concern has been growing to the point of firm belief that something was surely WRONG with her.  I understood her concern but truly believed that she was wearing herself out with her hard work ethic at school and not drinking enough water.  But, because she was concerned (calm, but worried) and her teacher and friends were very concerned, I felt that I must get her checked out.  We went to the ER so she could have blood drawn and we could receive the answers right then and there.  There was a chance of perhaps a vitamin deficiency, too.  We have a small hospital nearby and in just a few hours Grace had the tests done, and a bag of fluids, as well.

Everything came back normal, praise the Lord, and we came home just thankful to know that it was a simple matter of dehydration and that it is unfortunately just her body’s way of dealing with stress, with headaches.  Poor girl.  I have a friend who gets terrible stomach aches when she’s overwhelmed.  I myself get a little loopy/mental/anxious.  One of my brothers gets heart palpitations.  My daughter gets headaches.  It is an ongoing valuable lesson for her in learning how to take care of herself BEFORE she gets sick.  Oh but guess what?  The nurse found out that Grace wants to work with the deaf after she graduates and low and behold she herself used to be a school nurse AT A LOCAL school for the deaf!!  She said, “Oh they would just LOVE you!  You should go and volunteer!  Tell ‘so and so’ that Nurse Sarah sent you!”  So God gave Grace that encouraging bit of information to go home with, too.

We came home, I held Sarah in my arms, and we all watched “Little Women”, the one with Wynona Ryder in it.  Myriah was disturbed by Jo’s final choice in love…..he seemed much too old for Jo, in her opinion.  But all in all, it was a great movie.  I myself have seen it about 10 times.  It’s perfect.

After the movie was over I drove through the cold bitter rain to pick Dave up from newspaper club.  Since it was soon time for Jacob to be done at track practice, we went to the library to wait for his call.  I checked out two Anne Lamott books, based on my friend Lea Ann’s recent recommendations, and two books for Grace.

We picked up Jacob and made our way home.  I was so very tired…..I started making enchiladas until I realized I didn’t have nearly enough cheddar cheese, so I put the ground beef (cooked) back in the fridge and made chicken instead.

After eating, we all sat on the couch and watched Phineas and Ferb until Myriah had to leave with friends.

David made a gun that really and truly shoots — out of Legos — and started making a mask out of an empty gallon jug and paper mache.

Rich came home around 6:30 and I sat at the counter with him as he ate.

At 7 we watched Jeopardy while Grace read her book, the boys slept, Caleb worked on his football cards, and Seth colored.

Sarah filled her arms with stuffed animals and asked me to tuck her in.  For whatever reason she does not like her Dad doing it.  At this point she goes to bed with about 10 stuffed animals, all as special as can be.  I made up a silly song, pretending to be the Choir of Stuffed Animals singing a song to Sarah, and she laughed.

The guys are awake now and playing their video game with Rich.  I decided to blog before bed and simply record the day. 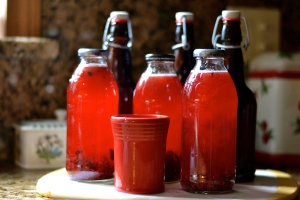 I opened a new batch of kombucha this evening.   Blackberry Sage.  It’s not only beautiful but delicious, too.

This picture is from yesterday of Sarah snuggled up to Myriah, Seth, and Ethan. 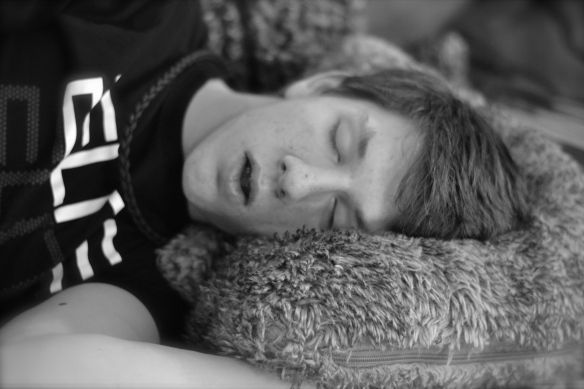 Be still my heart.

Caleb is obsessed with football and football cards nowadays.

Caleb is nine and just started his card collection 2 weeks ago.   Seth is six and now begging to collect basketball cards but I am saying no for now because “you can’t read very well yet”.  You see, most of the fun Caleb has with his cards is reading and studying them…..Seth doesn’t agree with me, and took matters into his own hands by starting a card collection OF HIS OWN ARTISTIC CREATION.  Adorable.

Grace is moving right along with her book, she was especially thrilled to discover that the main boy character is a wrestler (like her brothers).  She read part of it out loud to us.  She has had quite the day but is feeling so much better, although her arms hurt.  They had to stick her twice to get the IV in.

I’ve been stimulated enough by my family for one day so I’m all alone, ready to open up a book and fall asleep while reading it.

Peace, love, joy, and prayers to anyone who reads this!   I would love to hear from you in the comments!

“Grace can be the experience of a second wind when even though what you want is clarity and resolution, what you get is stamina and poignancy and the strength to hang on.”  Anne Lamott