Five or so years ago, one of Rich’s coworkers gave him two used basketball hoops that he didn’t want any longer.  They were the kind that were free standing and had to be held down in place with a sand filled bottom.  Eventually we found that they needed small boulders around the bottoms, too.  These basketball hoops were great fun for the family, but over the years the backboards broke, and the nets ripped off.  The children didn’t complain (that I know of) but when they went out to play, or had friends over, it was sort of sad to see them shooting hoops with this less than ideal set up.

There came a day, two weeks ago, when Rich had the time and energy to do something about the basketball hoops.  He took Ethan with him and drove to the nearest sporting goods store, only to discover than there were none in stock.  Nothing daunted, he got back in the truck with E and they drove another hour away to the only store that stocked what they needed.

For the rest of the day, Rich dug and dug, with Ethan by his side the entire time.  The hole needed to be a certain depth and width to properly sink the pole for the new hoop.  He did most of the digging, but after a while, when it was time to mix and pour the cement, Jacob and Ethan worked just as hard.  They ran out of cement and without a word to me, Rich drove back out to Home Depot (it was dark by this time) to buy some more…….leaving the boys to work by themselves until he returned. 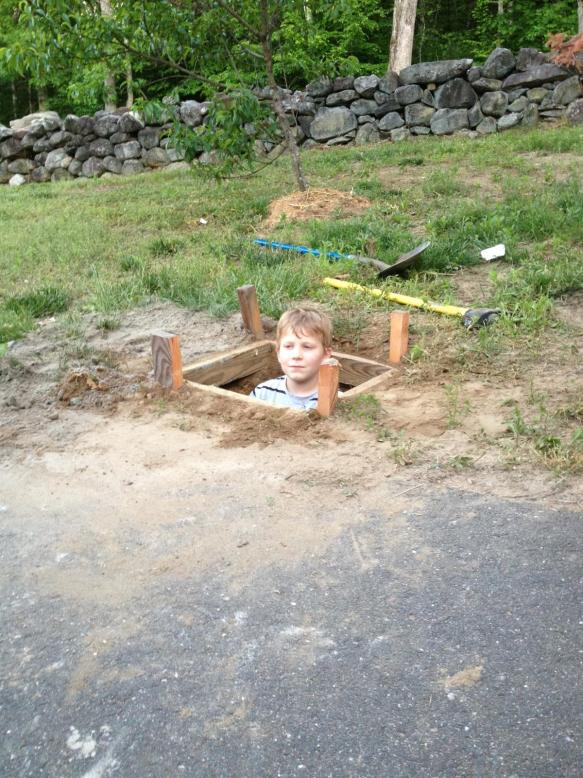 Rich had Jacob take a picture of Caleb in the hole before they started pouring cement.

After getting the cement poured, and the beginnings of the base inserted, they had to wait for it to thoroughly dry.  They were excited, and would have finished the project sooner, but Rich was away for four days last week on a business trip.  He returned on Thursday night, and on Saturday morning he went outside to finish the job, with all the boys around him.  They played loud music and worked, reading the instructions carefully, and doing each step the best they could possibly do, under Rich’s leadership.

He’s a leader first and foremost, in the home.

Jacob and Ethan had a party to go to and were gone most of the day, but Rich had plenty of children left to shoot hoops with.

Here he is, with Grace: 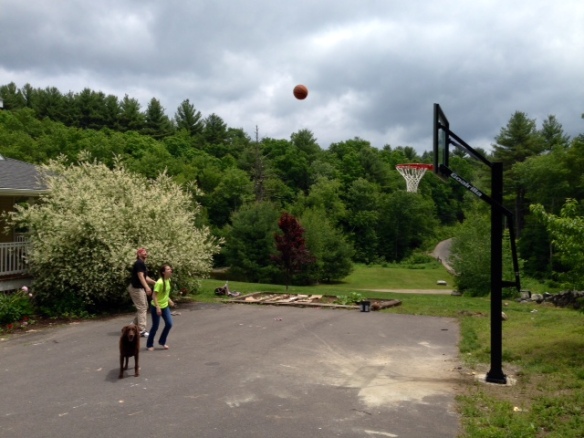 The pole can adjust up and down so that the little boys can play, too.

When Rich played with the boys yesterday he played (as Ethan said) PHYSICAL.  He has no mercy on the older ones.   He plays rough on the teens, but in gentleness with the five year old (Seth was on his team) *when he remembered that Seth was there*.  After they were all tired out, Jacob went to change his shirt because it was covered in his Dad’s sweat.  They had a great time.

When Rich takes his shirt off outside, Seth immediately takes his off, too.

It stopped me in my tracks to see their two shirts left behind:  Rich threw his up on the side of his truck, so Seth put his there, too.

It’s important to marry a good man, because the children will almost certainly, and naturally, follow his lead.

That truth wasn’t in my head when I said yes to Rich’s marriage proposal, so I am all the more thankful on my knees to God, for giving me this good man for my husband and for the father of our children. 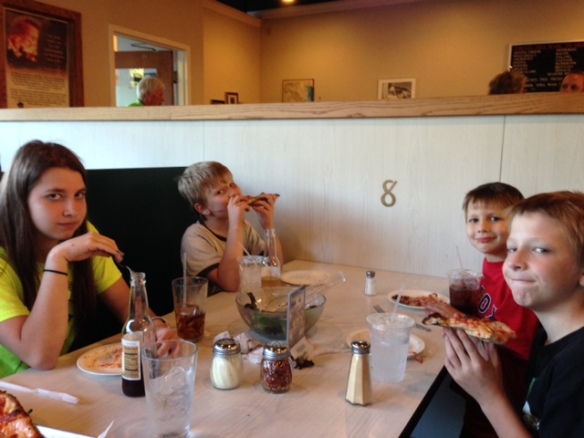 Often, the thing we are most gifted at is also the thing that gets annoying to our loved ones.  Rich always has to have things to do, and rarely just sits around. After being gone all week it was hard for him to just stop and sit by the wife on the couch.  On Saturday evening, after all that basketball playing, he had the nerve to say (right next to me!) that he was BORED.  (I’m smiling as I type).  Personally, I was tired, and with little Sarah sick with the stomach bug I was not going anywhere.  It was my suggestion that he take the children out to pizza (in this way, I didn’t have to think about what to serve for dinner) and he did.  At 7:00 pm, when I would have been thinking “It’s almost bedtime for the youngsters!”  he loaded them up and headed to the pizza place.

He sent me the picture.  I look at it and think, “KIDS WITH THEIR DAD”.  I love it.  Rich loves pizza and so do all the children.

It’s easy to be a good dad.  Just do what you want to do, what you enjoy doing, and, with a loving heart, take the kids along for the ride.

The loving heart part is the key.  Rich doesn’t TALK about his love as much as he shows it, and he shows it in ways that I remember and hold close in my heart.  Like when he gets sad because the older ones are almost grown up and will leave him soon.  Like when it bothers him more that it bother me, that Jacob has a girlfriend, because it’s another sign that his children are getting older……… 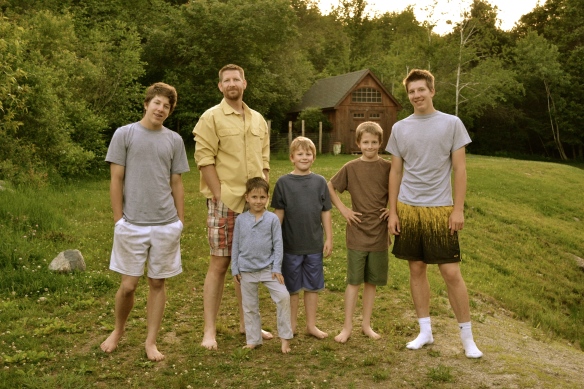 Sarah was sick yesterday, and Grace was at Baccalaureate,  so I took a few pictures in honor of Father’s day, of just Rich and his sons.  I like pictures in which the children wear what they like to wear….my only requirement was that the boys turn their shirts around because they each had words on the front.  Jacob is wearing socks because he hates going barefoot.  It might look funny in the photo, but to me it is beautiful because that’s the way he is. 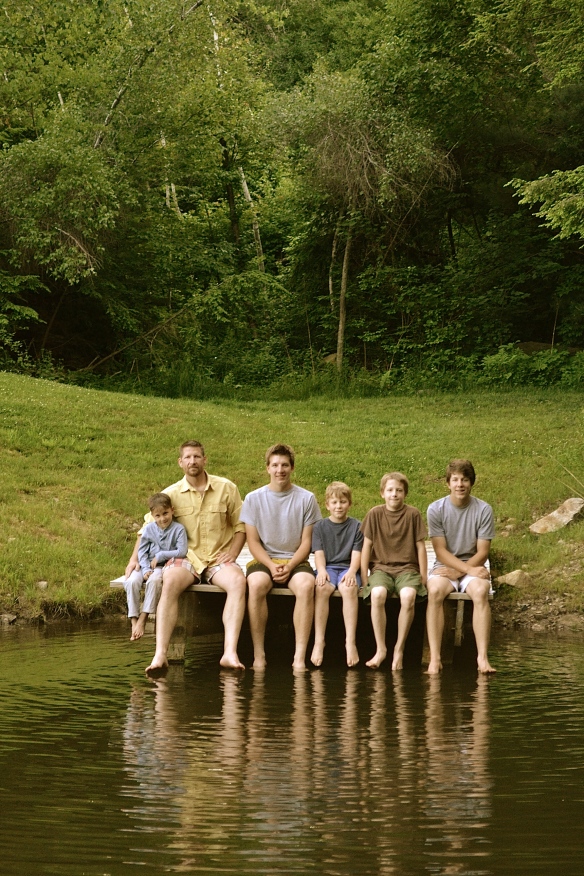 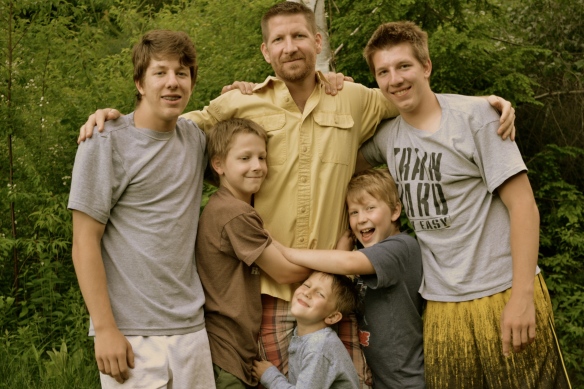 “To be honest, to be kind–to earn
a little and to spend a little less, to make
upon the whole a family happier for his presence…….”

5 thoughts on “with their dad”