There is just something extra special about a handmade sweater, especially if it’s made by an old white haired lady.  After receiving it, the young mama puts it on her little one with thoughts of the granny who made it, and it’s like wrapping up that child up in a hug.  Yes, years ago, when my firstborn was a little boy, his Great-Great Grandma made him and his little brother both warm sweaters.  These sweaters, everyone agreed, were special, because they zipped up the back.  Through the years of putting the sweaters on the children, I would get a little thrill as I told them to *turn around* so I could zip them (up the back).  The oldest wore his light blue sweater, then the second oldest wore it, then the third oldest, then the fourth oldest, then the fifth oldest, then the sixth oldest, and last but never ever least, it was Sarah Joy’s turn.  (she’s the youngest)

This sweater is one of the only articles of clothing that was worn by all seven children.

(Unrelated:  “Why are we Still Wearing Sweaters at the End of May?”) 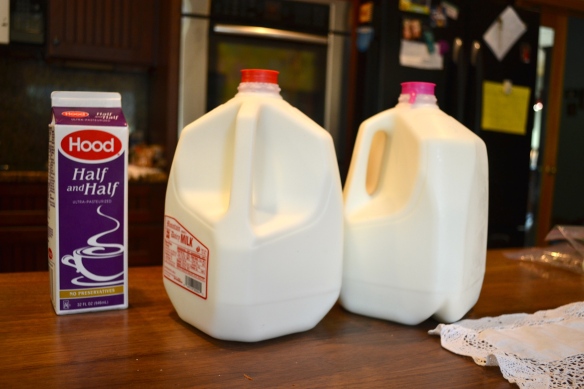 You know how some mornings you wake up just ready?  Ready to pleasantly tackle any ol’ problem that comes your way?  You’re full of optimism, you have a song in your heart, and can’t wait to wrap your arms around your loved ones?   I don’t either, but some mornings are definitely better than others.  The first thing I do when I wake up is stumble out of my bedroom, say good morning to the teenagers, and make my way over to the coffee pot.  This morning, I was extra and beyond tired.  When I made my way to the coffee pot, I discovered to my horror that Jacob had beaten me to the remainder of the half and half.  He thought he had the right to finish it!  I said, “If this ever happens again, and the carton is almost gone, DON’T USE IT UP, DON’T TOUCH IT, LEAVE IT FOR ME!”  Jacob was offended, “Then I won’t get any!” he cried.  “Yes, yes, that’s right.”  I nodded.  To make matters even more discouraging we were completely out of milk (and we had been, for days).  We have the $ to buy milk, rest assured, it was just one of those things that I hadn’t taken care of yet.  It would ruin my morning to drink coffee without cream or milk.  I ran into my bedroom to whine to my husband, who laughed at me and said “You’ll have to go out this morning and buy some!”  I whined some more about not wanting to go, I couldn’t go, I just couldn’t handle going shopping with Seth and Sarah and………..”  He left for work still laughing!  I thought and thought about what to do, and I had no gumption.  Should I put the kids in the car and go through a drive through for coffee?  But, that wouldn’t help with the milk situation.  Should I buzz down to the grocery store?  It was only 6:30!  I went downstairs to wake up the boys for school and then went to my room to get dressed.  I was downcast and my spirit was low within me.  I could hear the boys in the kitchen.  I went out to put cream cheese on their bagels and saw …… my husband was back home, and at the coffee maker.  It took me a few seconds (did he forget something?) before I realized that he had indeed BOUGHT MILK and BROUGHT IT HOME to MEEEEEE!!!!!!!!  I squealed and ran toward him.  He took off running around the kitchen and I chased him around the island saying thank you!  thank you so much!  As I hugged him around the neck I could hear Caleb saying, “Does this mean I can have cereal now?”  Rich pointed dramatically at Caleb like I was choking him and he couldn’t get away, “Your son wants some cereal.”

Sometimes milk is even better than a bouquet of flowers. 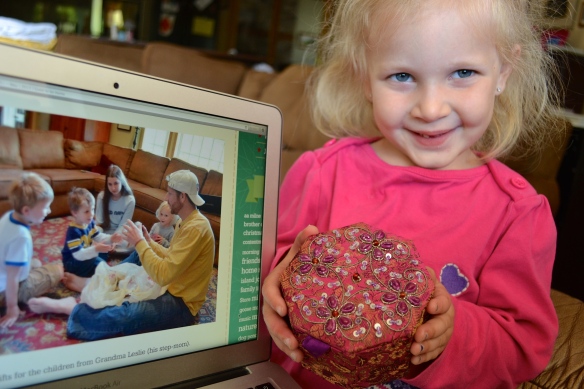 This is Such a Weird Coincidence

So, as I drank my wonderful coffee this morning, I got on the computer.  I went to the blog and clicked into the archives, looking at and reading about what we were doing as a family last year.   I could hear Seth and Sarah rummaging in my room but I was pretty much just telling myself that surely they were being good and not making a mess (uh-huh, yeah).  Presently, Sarah came to me and got in the chair.  She had a pretty little bejeweled fabric box in her hands.  Interestingly enough, I myself had come across the box this past weekend, in another box in my room, so I knew that she had done some serious rummaging to find it.  To me it was just another thing in the house, but she was agog over it and wanted to know if she could have it.  “No,” I answered, “that’s mama’s box.”  It was filled with embroidery floss and I told her to leave it alone.  She remained compliantly by my side and glanced at the computer screen.  I scrolled down, talking to her and showing her the pictures.  “Mom, wait!”  She pointed at a picture.  “See?  This IS my box!”  “What?” I said, astounded.  Because, there before my eyes was a picture of Rich last year, passing out gifts to the children from their Grandma Leslie, and there was Sarah, with bright eyes, holding on to the very same box she had found this morning in my room!

I immediately and humbly returned it to her, as I can’t argue with concrete evidence.

It was just too weird!! What are the chances of 1) her actually FINDING the box  2) at the exact time that I came across the picture I took when she first received it! 3) Honestly, I really didn’t remember where the thing had come from!  I just thought it was my own pretty embroidery floss container.

She carried it around all morning.

4 thoughts on “3 little stories from the past 24 hours”