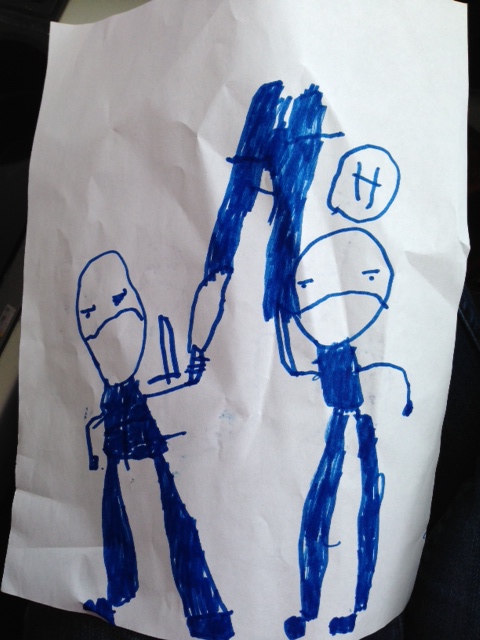 Seth, our youngest boy (of which we have five) has been heart achingly cute this weekend (and always).  He did many cute things which will not be mentioned here today.   However, the two blue guys must be mentioned.  Rich and I had to run errands on Saturday morning and Seth came along, bringing with him white paper, a drawing book, and a blue marker.  He is an energetic sort of person, lighthearted,  jolly,  fun, sparkling with LIFE, so to see him concentrating back there in his seat with a marker was too much.  Then, to see his drawing!  I delight.  The bendable arms!  The hands like balls!  The long frog-like mouths!  And the speech bubble!  He only knows one word, and it is “H”.

When we were out running errands, Rich and Ethan dropped Sarah and me off at Eddie Bauer so I could return the pants which were too short and baggy.  Then we went to Gap Kids.  I made a discovery.  Sarah, who is three now, apparently loves to go shopping.  I’ve never specifically “gone shopping” with her other than the typical grocery or Target runs.  She was dreadfully hard to manage.  Happy, eager, decisive.   She managed to buy some black boots, and tights that have a teddy bear on the bum, but Seth (who was with his Dad and brother) also made out well.  I bought him some new church clothes.

Sunday morning.  Oh, Sunday morning how you challenge me.  But dressing Seth, who was properly scrubbed with a white washcloth of all blue marker remnants, was a satisfaction.  He was clean.  He was clean AND stylish, wearing clothes which were neither too big, nor too small, nor ripped, nor mismatched.  It called for a short photo shoot. 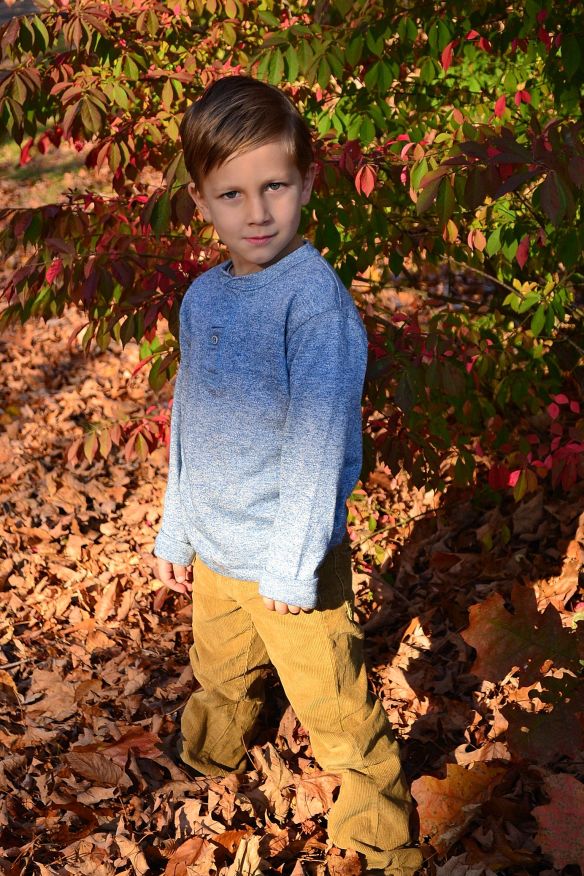 He understands, his mother fusses, and thinks he’s pretty special.

The drive to church was alarmingly quiet.  The back seat normally fools and teases; all was silent.  Rich and I took attendance, wondering if we accidently left someone behind.  All was well, “This is the nicest trip to church we’ve ever had!” I remarked.  Ethan laughed.

The children are all too old to go to nursery during church services and the hour is long for them and for me.  It starts out so beautiful; we snuggle in, oh it’s so warm and sweet to be singing together and worshiping.  Then.  It gets even warmer.  I need a little space.  The small boys can’t handle sitting by me, they know I am the soft parent and will soothe, pat, give mints, give anything to keep them quiet.  Outwardly I am serene, inwardly I am getting more and more tense.  “Why is this song so long and loud?”  Seth wonders.  We survive.  Seth’s outer shirt is removed, he’s hot.  Sarah is put in the nursery again “just this once”.  I pass out mints.  The sermon starts, and as Gary preaches about raising godly children in modern day America, Seth begins to fall asleep. 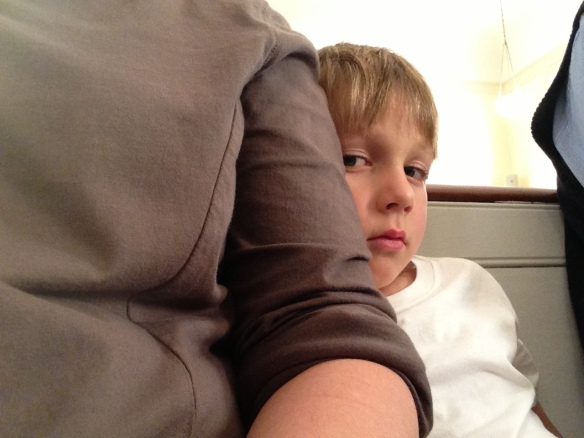 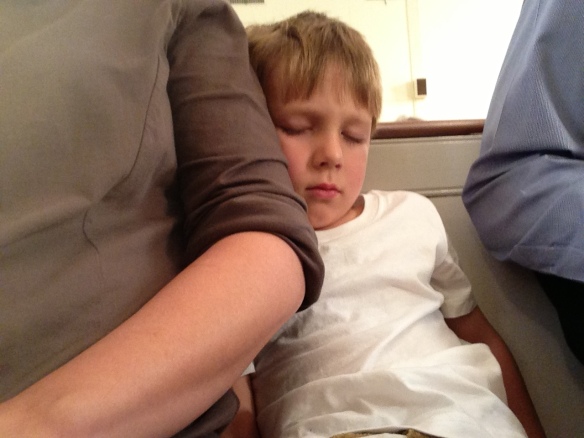 When I showed Seth his pictures this morning he gazed and I said, “Who’s that?”

I enjoyed Seth and his siblings so much this weekend that I left yesterday afternoon and spend three blissful hours, alone, at Barnes and Noble bookstore.

14 thoughts on “it’s somebody named seth”