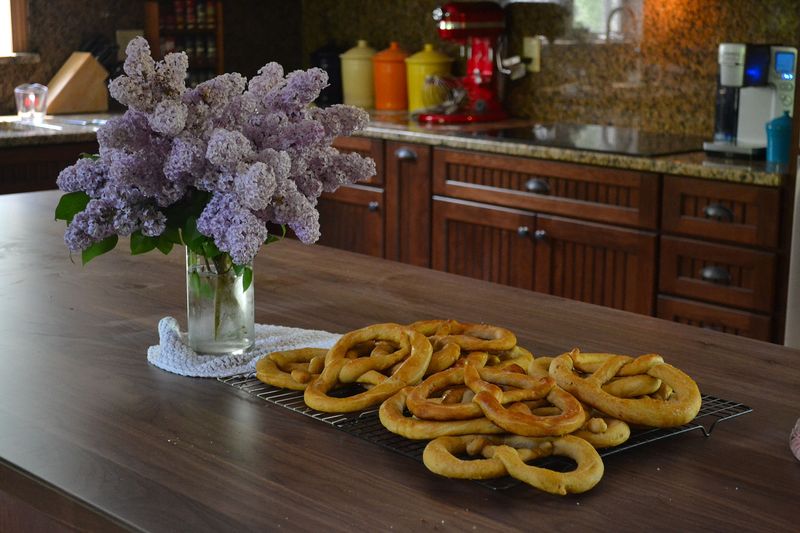 The children gave me a Top Secret Recipes cookbook a few years ago and I used the “secret” recipe for Aunt Anne’s pretzels.  I made them yesterday, for the first time, with my two ovens and big huge island and it was all so convenient.  The dough rises for about 45 minutes and by that time I had put Seth and Sarah down for naps and was alone in the kitchen, on a hot afternoon, barefoot and baking, almost-whistling, it was that sort of feeling; of contentment.  A friend (the one who crashed in our stream) even stopped by.  She had a big bag full of empty egg cartons for me and a vase of big floppy and dusky-purple lilacs.  Love.

Well, today’s news is that the kitchen remodel is done, all except I need to hang the curtain.  Kevin finished the hardware yesterday and the stools for the island came today.

(I’m typing this on the couch with two tiny kittens curled up next to me.) 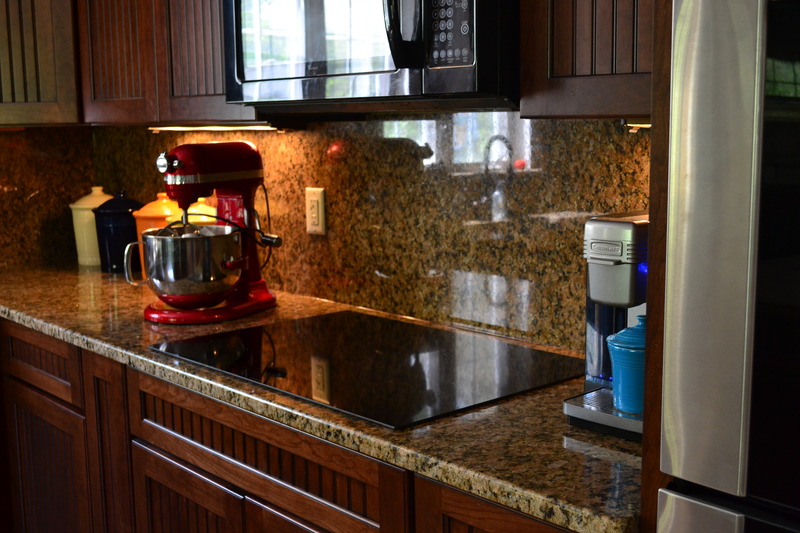 The cooktop was installed last week and I love it, it’s just a flat piece of glass that happens to be a cooktop.  No knobs, no buttons that stick out, nothing but glass with a digital pad along the bottom to turn the burners on with a pleasant little beep.  It amazes me when I use it.  There is a “boost” to the heat and I can get a can of soup or a big pot of water boiling in no time.  The only unfortunate thing is that it is induction heat and I can’t use half my pans because they have a coating on the outside of them…..I did have extra downstairs that I was saving for the boys that I’m using now, some nonstick pans that I got from points at the grocery store for “free” much to Rich’s dismay (he was so proud of the pots and pans he got me for Christmas).  Cast iron still works, thankfully, and enamel covered cast iron, too. 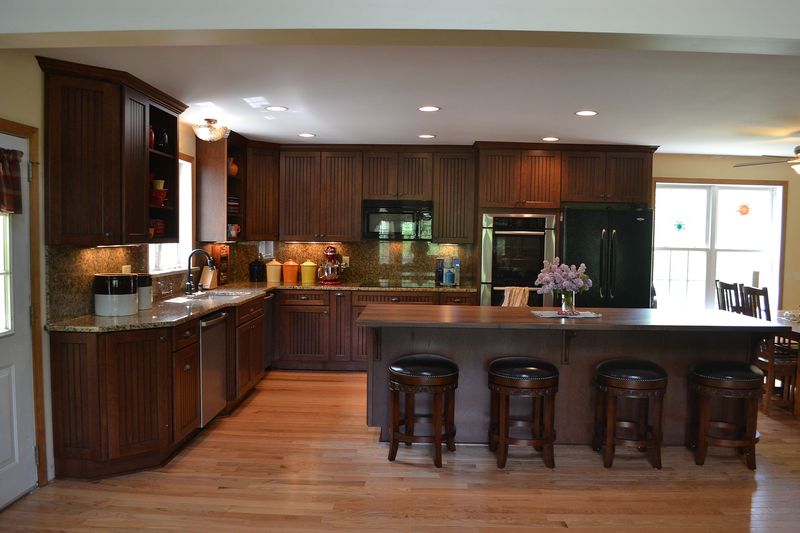 This afternoon I came home from a craft time with the Bible study ladies and there were four big boxes on the porch.  The stools were delivered while we were gone.  I unpacked them and then spent quite a bit of time sweeping up all the little Styrofoam bits that they were packed in.  We ordered these stools from Costco, and they are nice and big and they swivel!  My grandparents had swiveling stools at their counter and I always loved sitting in them and especially wanted swivels for my home, too.  Jake and E thought it was an unwise decision, they think the little ones will spin themselves senseless on them.  I’ll keep you posted on that. 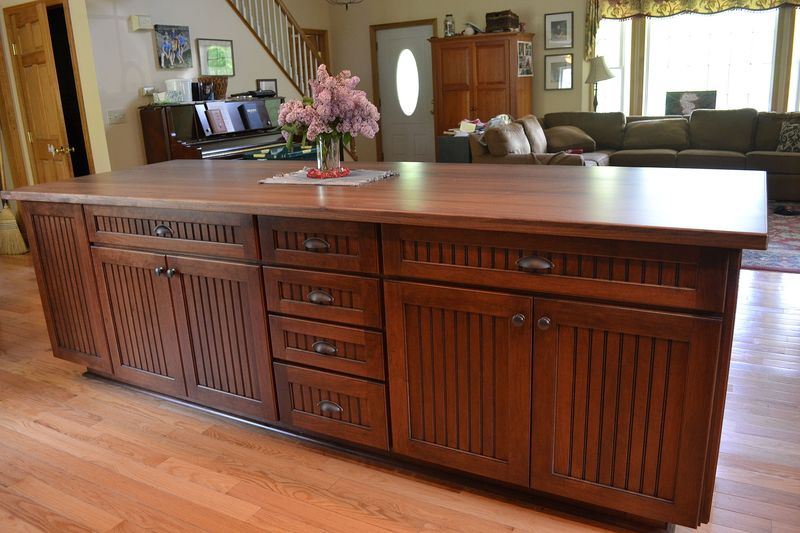 Decisions……are so hard at times….but (I must say) I chose the hardware for the cabinets all by myself.  I didn’t hem, or haw, or text Rich a picture for approval, I just marched in there and picked them out in hardly any time at all. 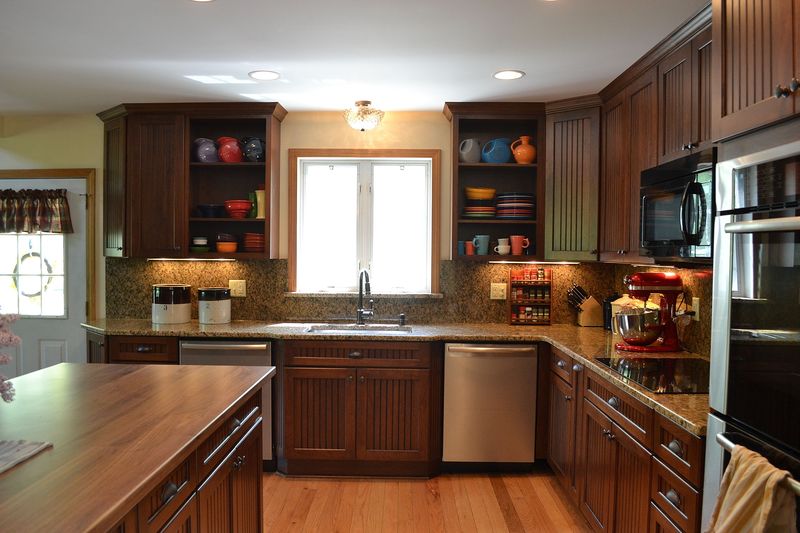 Rich bought the two big crocks (on the left) at Brimfield on Sunday.  A number 2 and number 3.  They will go in my future pantry.  Notice the under counter lighting and the light fixture above the sink, which is mercury glass. 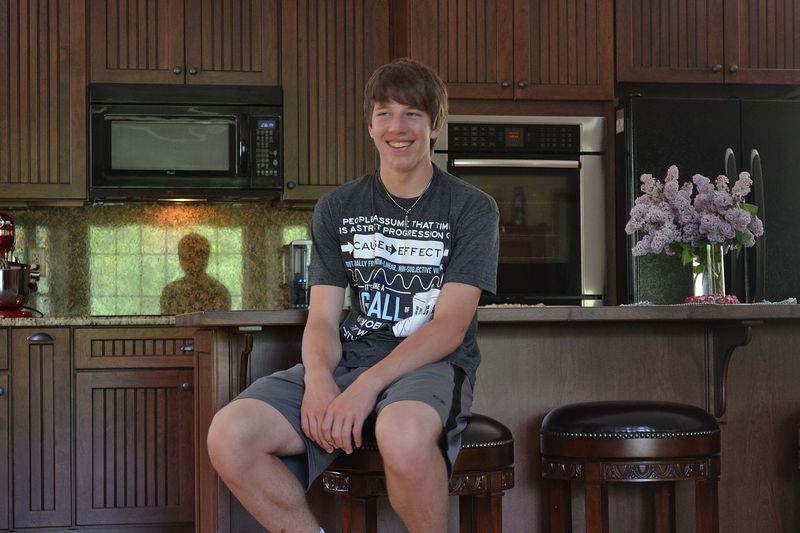 Jacob and Ethan just got home from school so I took this one of Jacob sitting on a new seat (he’s wearing his D.Who shirt @seriesoffortunatevents) 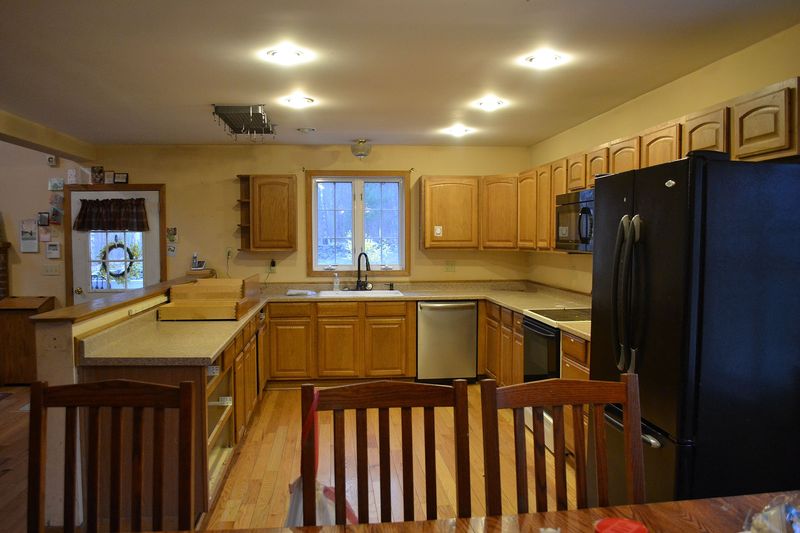 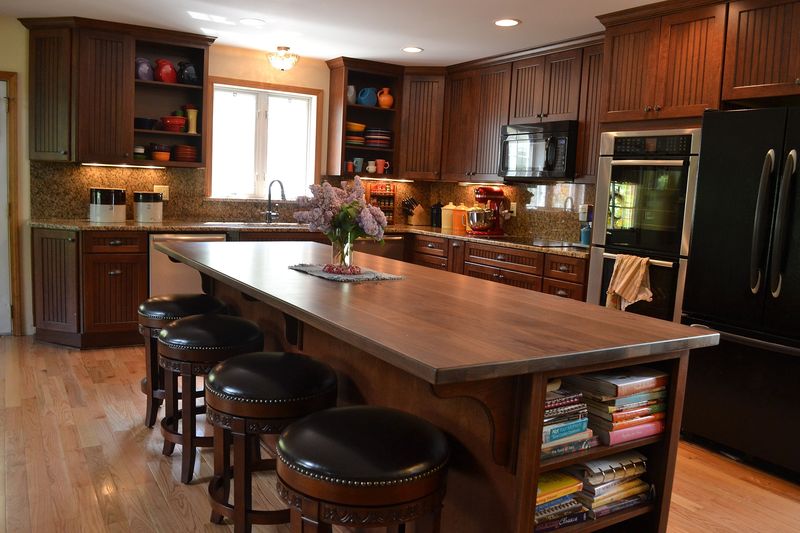 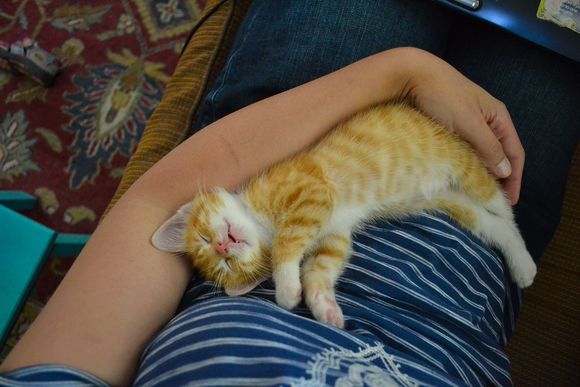