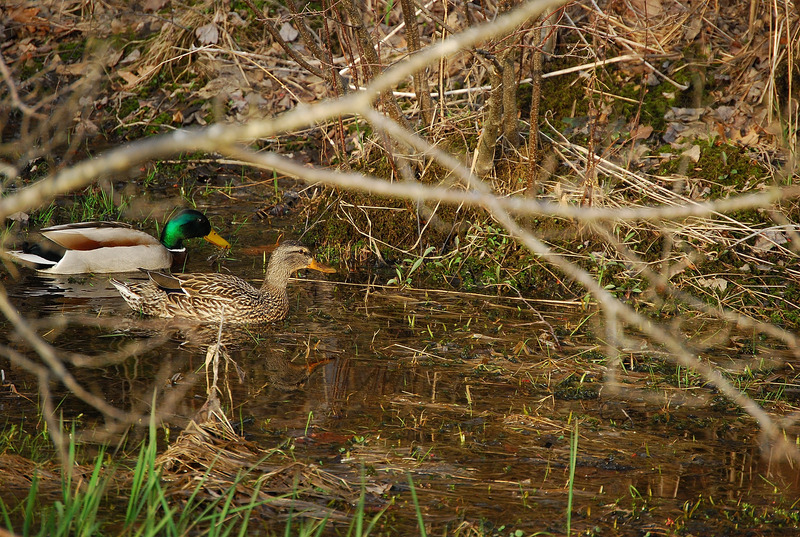 “Did you ever try to calculate in dollars the pleasure that you receive from seeing or hearing the first spring migrants?  Birds are interesting to most people because of their mere presence, their songs, their colors, or their habits.  Persons engaged in nature-study are led outdoors and thus have opened to them many other nature fields.” 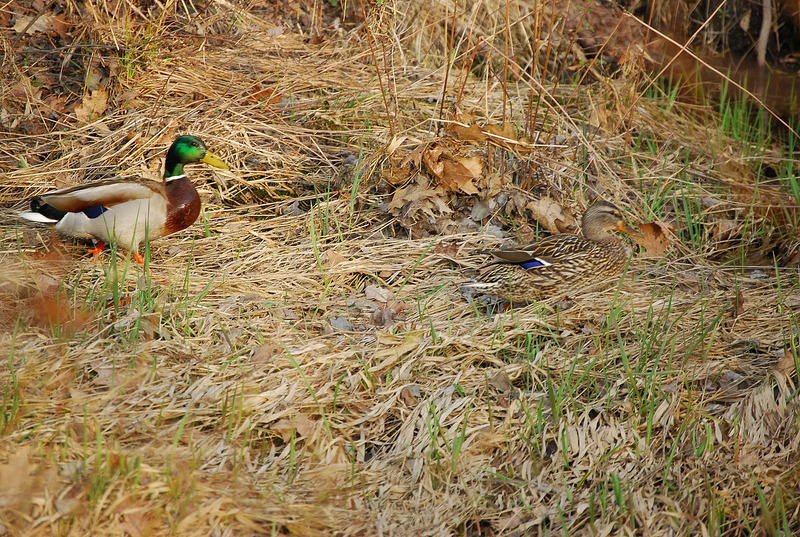 When Rich came home last night, he found Jacob watching Seth at the swingset and Seth’s mother wandering around down by the stream, camera in hand.  I was outside during the last of the evening hours and discovered a pair of ducks.  Aren’t they pretty?  Do you see the female duck in that picture above?  If it wasn’t for that spot of blue on her wing she would be almost invisible.  We wonder if they will live by the stream this spring, to hatch out babies. 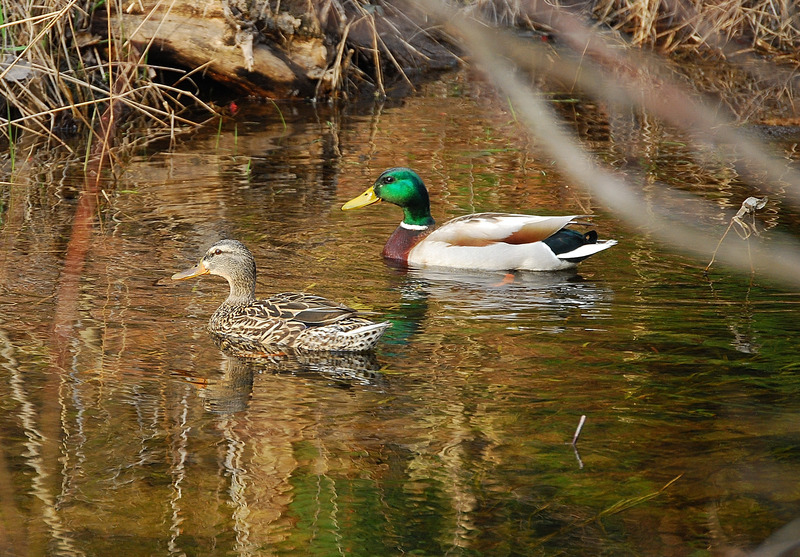 The weather has been so beautiful and it is supposed to be near 80 degrees today.  I want to be outside, but it has proved to be rather difficult with little Seth…..who is very busy, fast, daring, and curious about everything.

His new thing is climbing the ladder of the playset all the way to the top, which really stresses me out.  I don’t want him to fall.

Look at his bright face.  He’s just so happy to be growing and doing big boy things, like Caleb.  And anyway, we are both sleeping like logs at night from all the adventures. 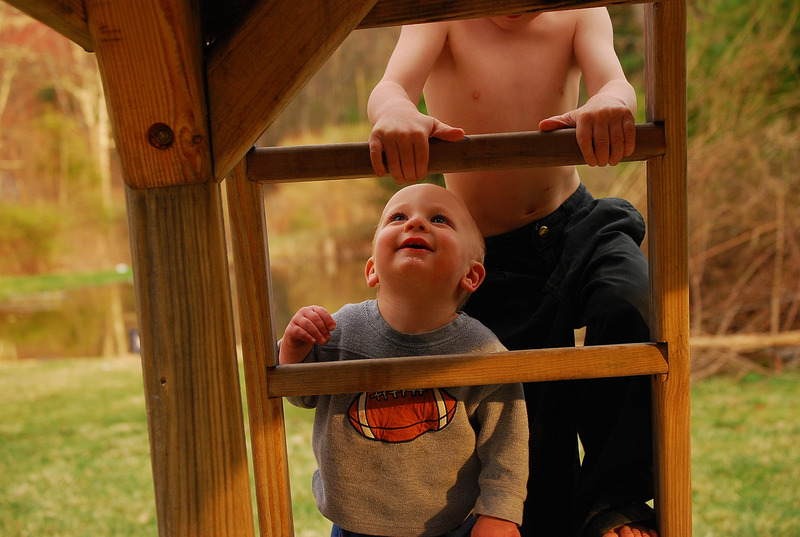 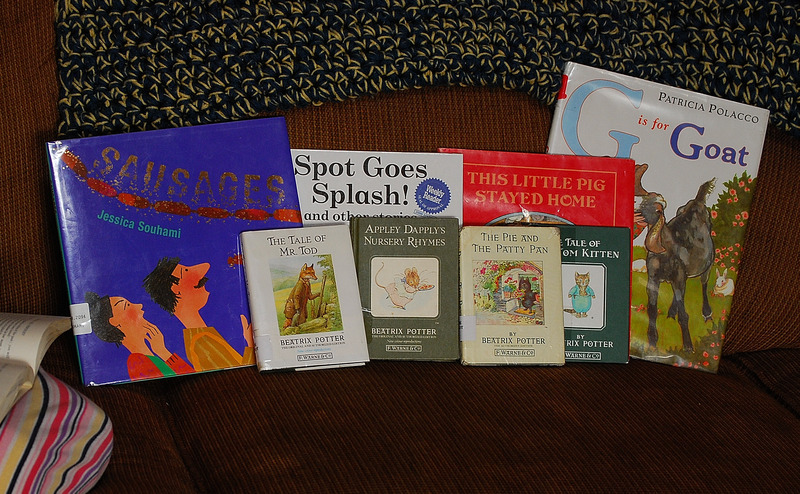 These are the books I picked out for the little boys when we were at the library yesterday.  Spot is always a favorite character, along with the Beatrix Potter books.  Sausages is a book we have borrowed and read before, and David was so pleased to see it when he came home from school.

Jacob’s read:  The Return of the Shadow.  He has read all of The Lord of the Rings, and this book is great for him because it shows the different text revisions that Tolkien went through, before the final book was completed.  He keeps reading parts of it out loud to me because he finds it so interesting.  I think it is good for him because he is learning about the process that authors go through as they write literature. 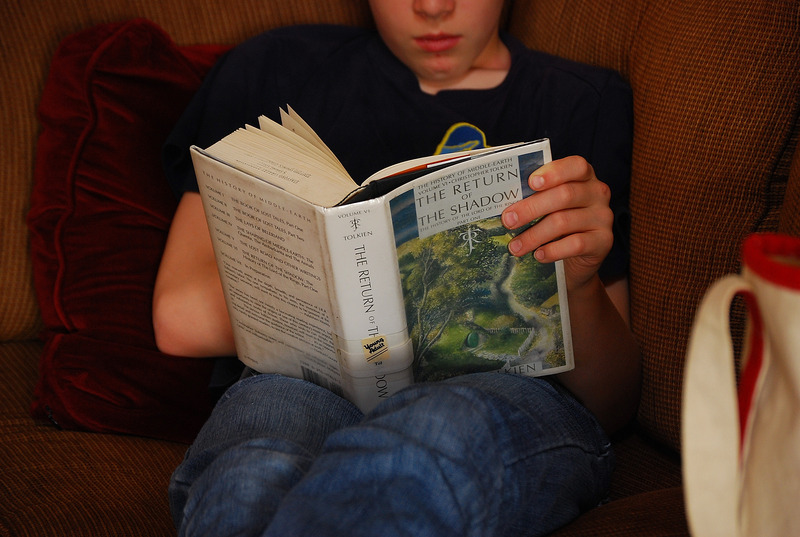 Ethan is reading The Witch of Blackbird Pond.  It is a book I chose for him and told him he had to read.  I have seen it on several book lists for his reading level, and it is one that I read as a teenager.  He also picked out a book about trapping and a book about falcons (inspired by his last read, My Side of the Mountain). 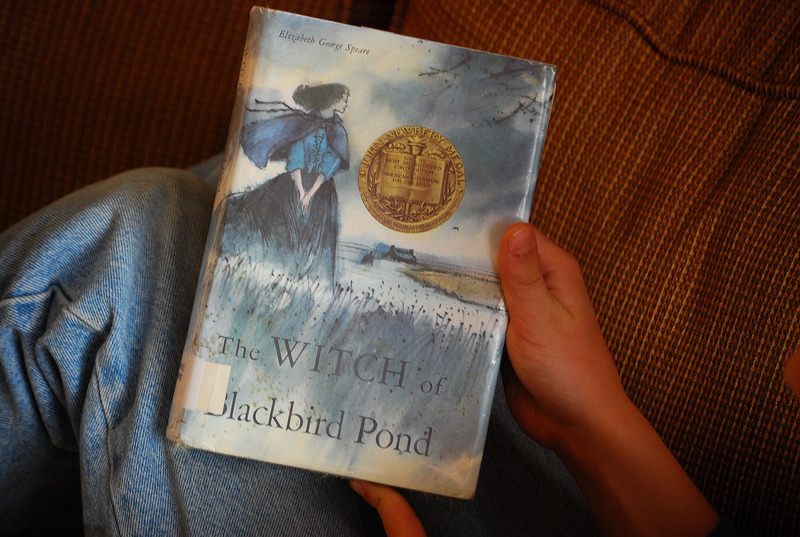 Grace picked out a book about identifying animal tracks, and an animal story.  My pick for her was The Red Fairy Book, and she is devoring it.  She reads so fast I wonder if any of it is staying in her mind!

It makes me happy when they enjoy the books I pick out for them.  By the time I am done raising children I am sure I might enjoy being a librarian!  In a way, I’m already one.  Isn’t motherhood grand?  You get to try all sorts of jobs. 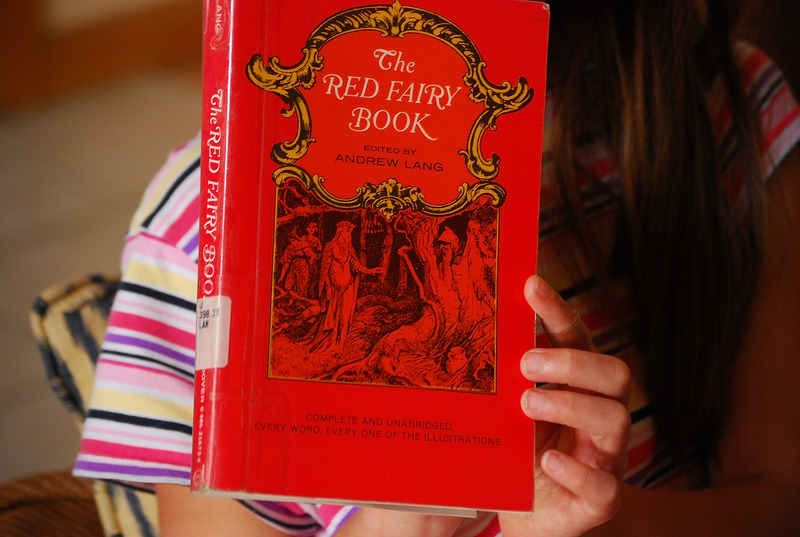 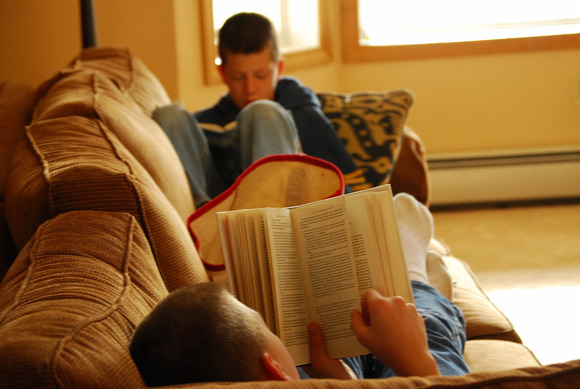 Next is a photo of the kitchen table, for the lovely lady who said she likes seeing pictures of it.  I remembered her note this morning as I cleared the breakfast things away, and I was inspired enough to wash it off good, and lay down a small square tablecloth from my friend Bridgette, a crocheted doily that I bought at a tag sale, a circle doily from Ireland (a gift from Joanna), a rose scented candle that I lit only for the picture (Seth climbs on the table at every opportunity), and paper butterflies that Grace and I folded (I got the idea from another blog). 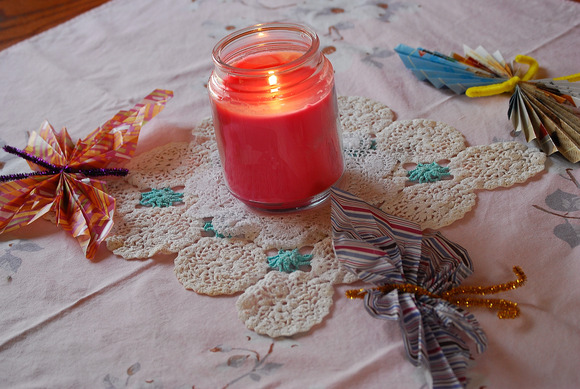 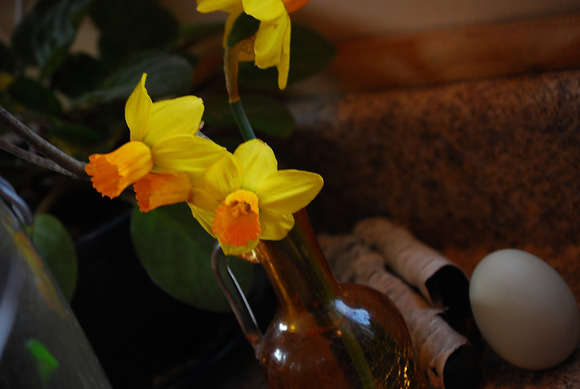 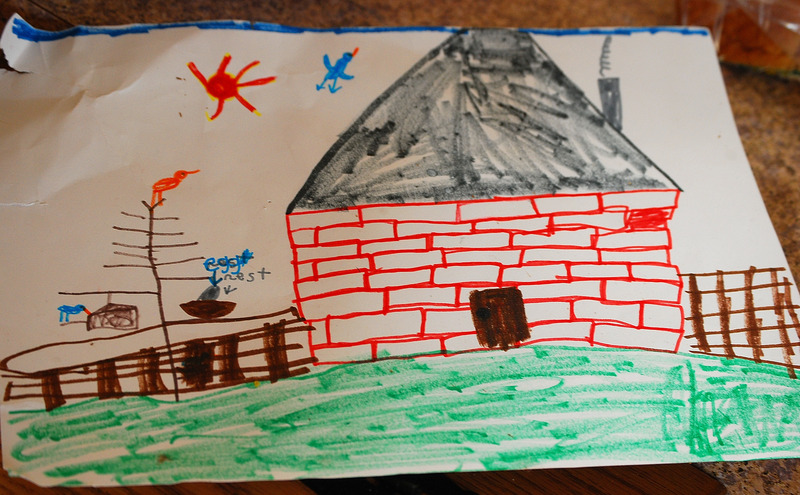 This is David’s special drawing lately.  I have seen many many versions of this brick house.  This one is extra nice because of the bird feeding station.  And I love the blue bird that’s flying stiffly up by the roof.  David is a real artist, you know.  (He told me.)

Something funny:  Yesterday I was making chicken divan for dinner, and I was pulling meat off a rotisserie chicken to use in the casserole.  Seth was hanging off my legs, fussing at me, so I put a piece of meat in his mouth and said, “It’s CHICKEN!”  Off he went, running to the window in the livingroom, to look for our chickens!  He was saying, “chicken!  chicken!”  in his baby talk voice.  I had to laugh and feel sort of bad, I wonder if he’s going to be confused for a little while, seeing chickens outside and eating chicken at the table?

An example of why my brain becomes overloaded:  Yesterday, I was making dinner in the kitchen, while talking on the phone with my sister.   Seth was with me and kept grabbing my skirt and fussing.  Caleb was also by me, saying “Mom?  Mom?  Mom?  Mom?  Mom?  Can I have a jellybean?” The next thing I know……in came Ethan and Grace with a wriggling SNAKE, so I could admire it.  Now that I think back on it, I kinda wish there was a hidden camera in the kitchen, video taping it all.  I’m sure it would be really funny to watch.

Have a great day!

0 thoughts on “this and that”