Thanks for your opinions about the header!  I just got on the computer and was shocked to see so many comments…very helpful indeed.

About the picture…yes, it’s of Grace.  The two of us walked down to the stream the other day to check on a moth cocoon that we are waiting to see hatch.  Grace, in her bare feet, was going all over the place, not caring if she got wet.  She started going off in one direction and sunk clear up to her knees in black mud.  The noises she made and her cautions, “Don’t come over here, Mom!  I DON’T recommend coming THIS way.” made me laugh and laugh.  (And take a picture).

I thought I would share a recipe today.  I made it last week and Rich said it was his new favorite dessert. 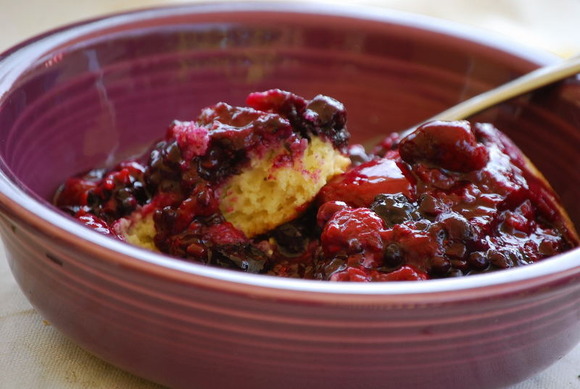 I found this in the book linked to this post.  It’s probably just a basic recipe you could find in any ol’ cookbook, but here you go:

Make the biscuit topping.  In a large bowl, toss together the flour, sugar, baking powder, and salt.  Using your fingers, rub the butter into the flour mixture until the mixture resembles coarse crumbs.

Add the cream to the crumbs, tossing with a fork until a soft batter forms.  Set the topping aside.

Bake the cobbler for 45 minutes, or until the topping is golden brown and the filling is bubbling.  Let the cobbler cool slightly on a wire rack before serving.  Serve warm or at room temperature.  Serves SIX

My own personal tweaks to the recipe:

used 5 cups of mixed berries instead of 4 cups of blackberries
used cinnamon instead of all spice
(also, next time I make it, I will try adding honey to the filling instead of sugar)

I know I could make my life a whole lot easier if I skimped on homemade things like desserts, breads, and nice dinners.  However, I really really enjoy baking and cooking, even though it can be hard to make *for example* homemade dinner rolls (like I did yesterday evening) when it’s “that” time of the day (everyone is getting tired and grouchy, and mom can’t wait for dad to come home!).  But, I’ll tell ya, Rich was one happy man when he was eating those warm from the oven rolls last night…the children were happy, too….the noises of delight, “hmmm! hmmmm!” made me smile.  It’s totally worth the trouble!  And Rich gave me a nice kiss right at the table, he was so pleased.  Food isn’t the only way to a man’s heart (

) but yes, for most men, it is a big step toward those lovin’ feelings when his stomach is satisfied after a long day of working away from home.

I don’t like cleaning the kitchen after dinner but the children are old enough to do it now.  What a blessing!

Speaking of food.  I made an odd lunch for the children yesterday but they loved it.  It was a pound of hamburger fried up in a pan, with one big can of baked beans mixed in, and some leftover corn from the fridge.  I didn’t even add anything else…but, like I said, they enjoyed it, and it was healthy so there you go.  Jacob got out rolls and had his mixture on a bun.  They were impressed, and said they would add it to their menu.  (They say they will own their own restaurant someday which is a favorite ongoing topic of discussion).

I’ve been making the children all eat breakfast and lunch together around the table again.  We were starting to “just make yourself something to eat when you’re ready” but then I realized I did not know what they were eating and I didn’t think it was healthy enough.  I think it’s better and easier for us all to eat together, it makes for some fun family times and the work of the meals is all at once, instead of scattered over an hour or more.  The children start off on the strangest topics and we all get to laughing.  Although, I must admit, there are times when I put a ban on talking.  Sometimes I really need the quiet.

It’s been rainy here the last few days.  Yesterday I was so drowsy that we watched a movie after lunch.  The children had listened to Hans Brinker on my IPOD (*Unabridged version*. I’ve been buying books for my ipod lately and they love to listen…Bambi, Where the Red Fern Grows, and Redwall) and then I had ordered the movie off of Netflix.  It is an old Disney movie and it was good!  Everyone liked it except Caleb (it was a little over his head).  They all wanted to go ice skating afterwards, but they satisfied their urges by “skating” with socks on the bare floors instead.

My little lamby just woke up (baaaaa-ing like a lamb to call me) and he’s soaked so off I go.

Have a good day!