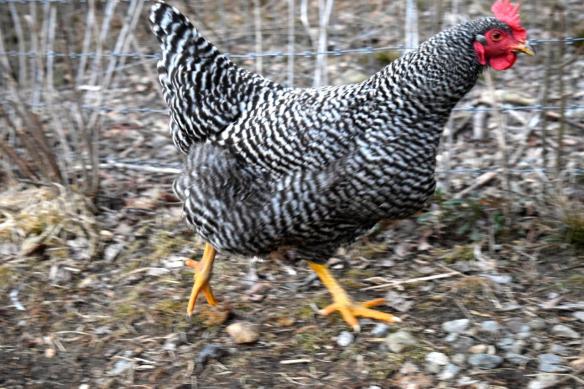 Everything is flowing — going somewhere, animals and so-called lifeless rocks as well as water. Thus the snow flows fast or slow in grand beauty-making glaciers and avalanches; the air in majestic floods carrying minerals, plant leaves, seeds, spores, with streams of music and fragrance; water streams carrying rocks… While the stars go streaming through space pulsed on and on forever like blood…in Nature’s warm heart. John Muir

Hello, it was one of those weird weeks when things are sort of crappy but sort of unexpectedly nice, at the same time.

Rich was away for five days in a row and we dealt with the stomach bug while he was away. Sarah was supposed to go in for surgery on Thursday morning but as things would have it, I went to bed that night and NEVER SLEPT because my stomach was roiling.  My stomach felt as if it contained a turbulent, oily sea.  I was looking forward to vomiting.  Sarah had been sick on Monday, then David, and then Ethan.  They shared it with me!  I called the hospital at 4 in the morning so I could stop thinking about it.  They kindly rescheduled her surgery for this next coming Thursday.  I was happy.  I thought to myself, how nice, Rich will be back by then and I won’t have to go with Sarah alone after all.  I thought this for about 24 hours before I found out that Rich will be in Baltimore on that day.  I just have to laugh.  At least he will be home that evening.

I spent Thursday on the couch, with Ethan on the other couch.  It was the most relaxing sickness I think I have ever had.  This was the unexpectedly nice part.  The throwing up went away and I was left completely spent…..totally wiped out but with a smile on my face because I had no energy to even OVERTHINK…praise the Lord!  😉  I didn’t feel guilty in the least for not cooking dinner, not cleaning, drinking lots of sugar laden ginger ale, not tucking the boys into bed, watching too much tv, not showering, etc, I was just plain too tired to care!  LOL  (and so was E).

I fell asleep on the couch with Sarah at 6:30 pm Thursday, it was truly heart achingly sweet to be snuggled up with her.  We woke up and went to bed at 8 (when the little boys got home from wrestling practice thank you Jess) and I slept until 10:30 Friday morning.  It was awesome, and even better–Rich got home during that time.  He got out of bed in the morning to get the kids on the bus and then came back to bed and we both slept in.

Today is Saturday and he took the kids out for a little while.  Ethan broke his iPhone dropping it while playing basketball so they went to take care of that and to go shoot bow.  He sent me a picture of them eating lunch at Buffalo Wild wings.  He has David, Ethan, Tessa, Zak, Sarah, Seth, and Caleb with him.  LOL -the more the merrier-  Grace is at school  helping out at a band retreat and Jacob is working today until three.

When they left I watched a little TV and then went outside for a walk.  Yes, I’m feeling much better and it was wonderful to be outside.  Cold, but wonderful.  (34 degrees currently). 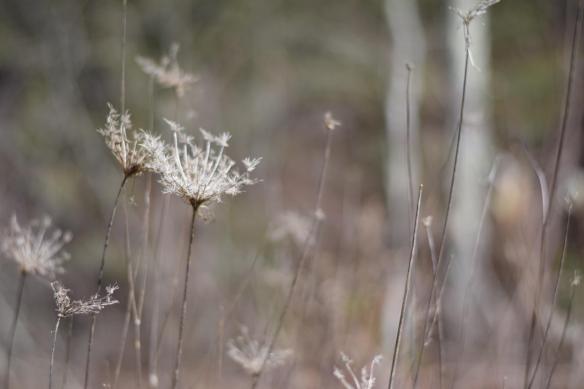 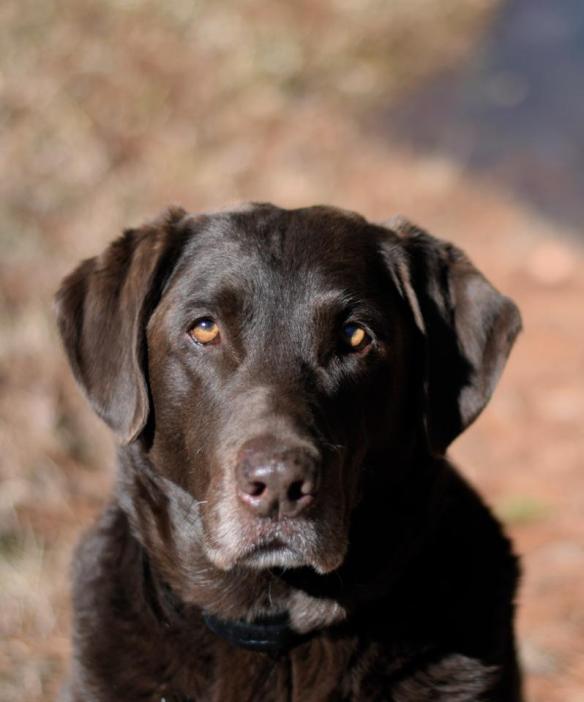 I didn’t charge him a portrait fee.  In fact I paid HIM for sitting so nice.  I gave him a warm hen egg from my pocket.  He loves them.  (he eats them)

I try to point my nose to the ground AND up to the sky, so as not to miss much.

Granted, I’m a pretty loud walker (trying to scare away bears) so it’s a miracle if I can get a bird within 35 feet of me.  Today I had a short lens but I cropped this pic….see the titmouse on the branch?  There were several of them, including some chickadees, and they were being quite communicative.  They were clearly mad that I was walking with a cat.

Sam had a great time running around, up and down trees and boulders, leaping over streams and such.

One of my favorite colors—dark brownish yellow–

Who knew the inside of acorn caps was such a pretty brown? 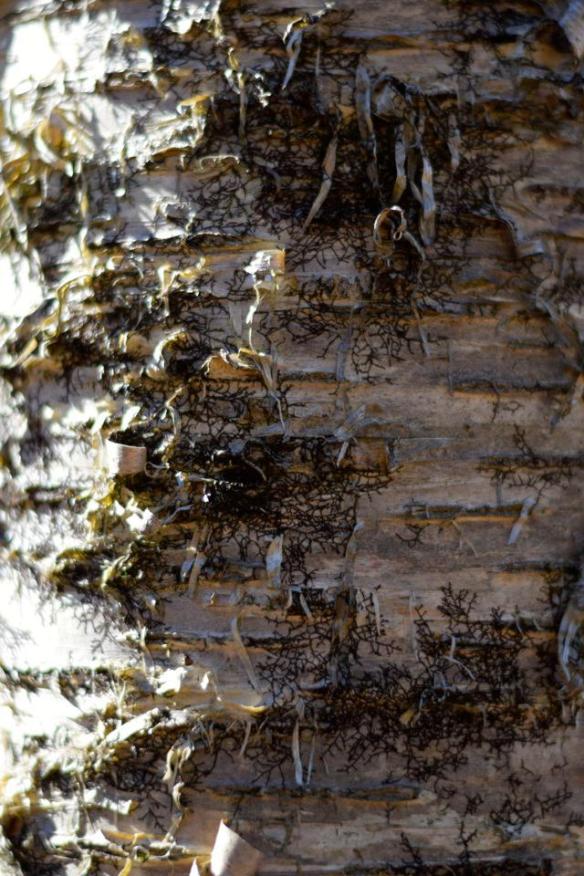 moss under a sheet of ice (turns out we had two storms Thursday night…one in my tummy and one outside the window….tons of rain, thunder, lightening, and wind)…all that rain left puddles to freeze up again so prettily.

Someone has a very nice home.

I spoke to a cardinal.  It seemed quite happy.  As it flew after a female, I understood why. 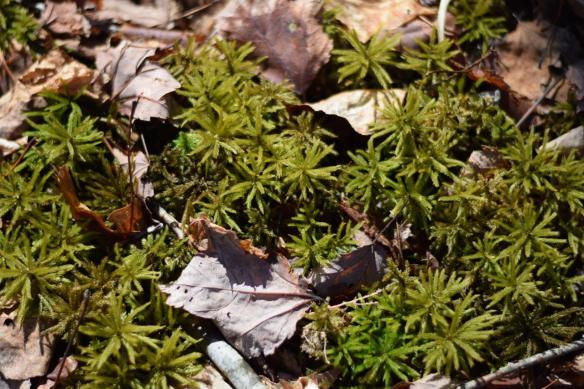 Another type of moss (growing by a running stream). 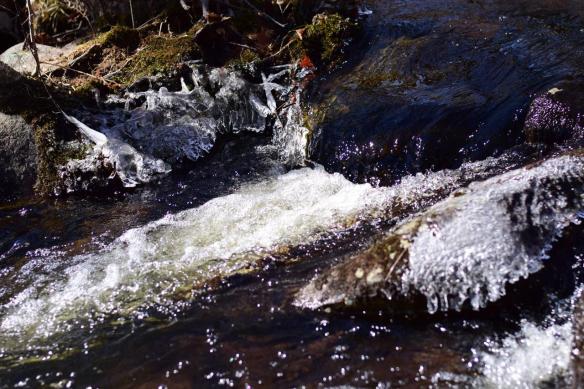 See the ice on either side of the photo?

I looked down and saw this::: 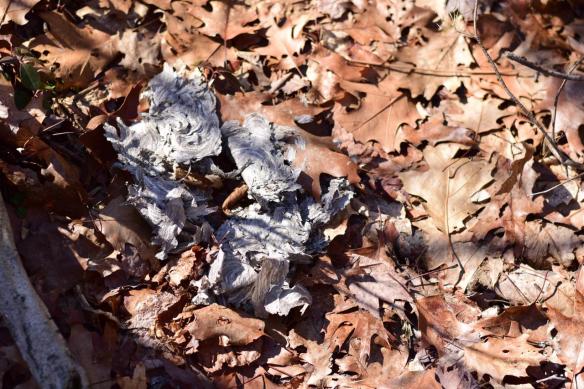 So then I looked up and saw this::

It’s my favorite picture of the day!

FIRST GREEN EGG from this flock of chickens!  Isn’t it lovely?

I repotted the string of pearls plant and put it in a red hanger.

flowers by the sink

“Just to be alive is a grand thing.”  Agatha Christie