I sat down this morning after I got the kids on the bus, to write a blog entry, which I do so love to do, seriously— it is like therapy to me.  Then I thought, well, I better just call the Pediatrician first *just to make sure* I have Sarah’s appointment time right.  I thought it was at 10:30.  Nope, I called and they said it was for 9.  Which meant I had 15 short minutes to get myself looking presentable, find all my stuff, and go to the school and pick her up.  The jitters begin.

(mind you, this week I kept David home two mornings for a dentist appointment.  The first morning ended up not being the right day, consequently I don’t trust myself)

I went to get her from school.  The office ladies looked at me blankly.  “But she just got here.”  “I know, I know, blah blah” I had to explain myself twice, after which the ladies laughed and understood and reassured me that everyone does it now and then.

I took her to the docs and guess what.  The UTI hasn’t healed.

You see, we go to a group of doctors.  The doctor that diagnosed the uti last Monday put her on antibiotics for 5 days.  When today’s doctor (#2) found out, she thought that probably Sarah needed to be on a full course (10 days) of antibiotics in order for it to clear up.  She also told me glumly, that Sarah’s iron was low and to give her iron-rich foods and a suppliment.

So I left with my sick child to go to Target to pick up the prescription.  Sarah was and is acting FINE, happy, cheerful, bossy, she doesn’t act like a sick person.  She is pale, however.  That and the urine test are her only symptoms of ill-health.  But in my mind I want to wrap her up in a blanket and hold her on my lap and not let go until she’s all better……

TARGET DID NOT HAVE THE MEDICINE FOR HER.  The jitters are getting worse.

I left Target and took her to school, while she periodically yelled from the back seat,  “HURRY!  I have to get back to school!!”  If she was even slightly unenthused about going I would have taken her back home with me for snuggles and fussing over.

I picked up her prescription in town at Rite Aid and am now home.

I haven’t told you about last night, though.

(clears throat)  So.  It was about 4:30 pm and the phone rang.  I figured it was Ethan.  Ethan typically calls after soccer practice is over so that we know when to go get him.  Well, it wasn’t Ethan.  It was his coach.  “Ethan had a little accident….” I have a rush of adrenaline, and a mild panic attack, “…he cut his toe in the locker room.  He’s going to need a trip to the ER to get stitches.”

All the way to the school I was wondering to myself how on earth he did such a thing.  He didn’t break a leg during practice, or a knee, or hit his head, or anything….no, my son cuts his toe.  THE PINKY TOE, the most insignificant extremity.

I arrived at the school to see Ethan waiting for me with the athletic trainer and the coach.  His pinky toe is wrapped up in tight white gauze.

We loaded him into the car and drove to the ER.  Once the toe was unwrapped I could see that yes….he for sure needed some sewing. 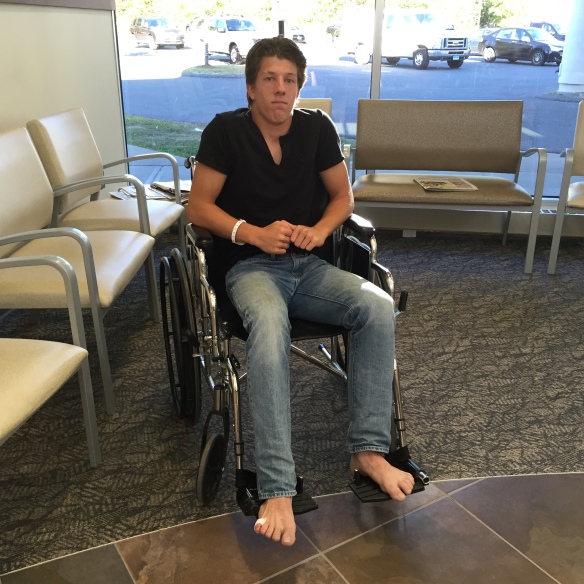 The soccer team goes off the field after practice, directly into the locker room through a heavy door.  The door is locked from the outside so if a boy gets stuck he has to stand outside and pound on it for one of the guys to let him in.  Yesterday, the guys were in the locker room after a rough practice, getting dressed to go home.  Ethan didn’t have his shoes on, as is typical for Ethan, and two of his friends were goofing around on each side of The Door, one kid was pulling to get in, one was pushing to keep him out.  Ethan “thoughtfully” offered to help out and the door ended up slamming shut on his toe.  He didn’t yell, he didn’t cry.  “I said, ‘Matt, my toe is stuck in the door, would you please open it?’  And he did, and we all stood there looking at my toe.  It was bleeding everywhere.  I thought for a second it might be gone, or half gone.  Then Mitch said, ‘Oh shoot, E, you’re probably going to need stitches,’ and he picked me up and carried me to the trainer’s office.  Blood was dripping the whole way.  I told Mitch to take pictures but I don’t think he did.”

The trainer stopped the bleeding, called the custodian to clean up the blood, and had someone call me.  I was told later that Ethan said, “My poor Mom.” which totally melted my heart.

(He felt bad because his Dad hasn’t been home since Sunday.  Dad is on a business trip–coming home tonight.  Meanwhile, the little boys had practice.  And Grace needed to be picked up after school.  Thank goodness for Jacob and his car!!!!!!!)

And praise the Lord for the athletic trainer.  He stayed with us in the ER the whole time and it would have been a lot worse without him there.  Because of him we avoided an x-ray and got out probably an hour or more earlier than we would have.

The pain from the numbing shots almost sent Ethan through the roof.  He admitted it was worse than the actual cut.  He started feeling weird and broke out in a sweat, but he kept his composure like a man…which he is….a good strong man through and through.  Although one wonders if a real man would have ended up in this situation?

While we waited, I got Ethan a soda and a candy bar from the vending machine and we had conversations about all the strange things happening that day…Ethan wasn’t the only one with a freak problem…..some crazy kid microwaved raisins in the school to make smoke and cause a small raisin-fire, also the school lost power for 45 minutes because of a car accident, another kid showed up at the ER after getting his foot ran over by his dad, someone fell off a ladder, someone else fell and to make matters worse was on blood thinners, the board at the nurses station was FULL of patients at our small hospital in which hardly anything happens.  What was going on?  We decided it was quite possibly caused by it being the first day of Fall????????

Regardless, they kept us waiting forever because the doc decided at the last minute that Ethan should have an x-ray because if his toe was broken he wanted him on antibiotics.  The other patients in the ER were the priority so finally Daniel the athletic trainer used a tuning fork test on Ethan’s toe which indicated that it was not broken.  The doctor agreed but put him on antibiotics anyway as a precaution….(why do the x-ray then I internally cried???)…..and three hours later we left the hospital, it was now almost 7:30, and dark outside.  We picked up the medication, picked up the boys who did NOT get hurt at football practice (thank goodness), and got food at the McDonald’s drive-thru.

Ethan went to school today wearing flip flops and he can’t even put a cleat on his foot until Monday, IF and only if his toe has healed sufficiently.

These are such small and typical problems, in the grand scheme of things, I know.  I am jittering, but I am also laughing a little, too, and thanking God for everything, always. 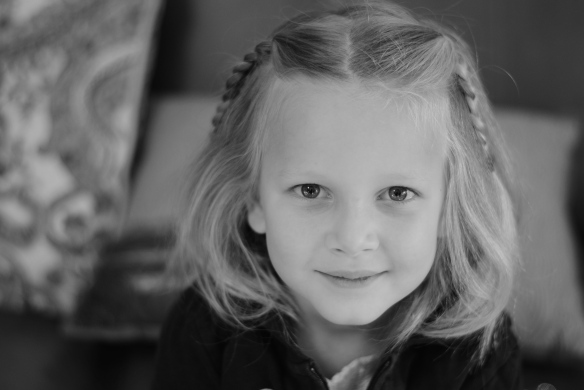 (Sarah, this morning, while waiting for the bus.)

(Seth and Gentleman Gray, this morning).

6 thoughts on “why I have the jitters”