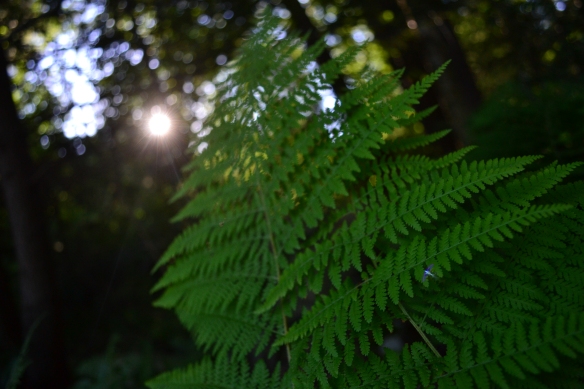 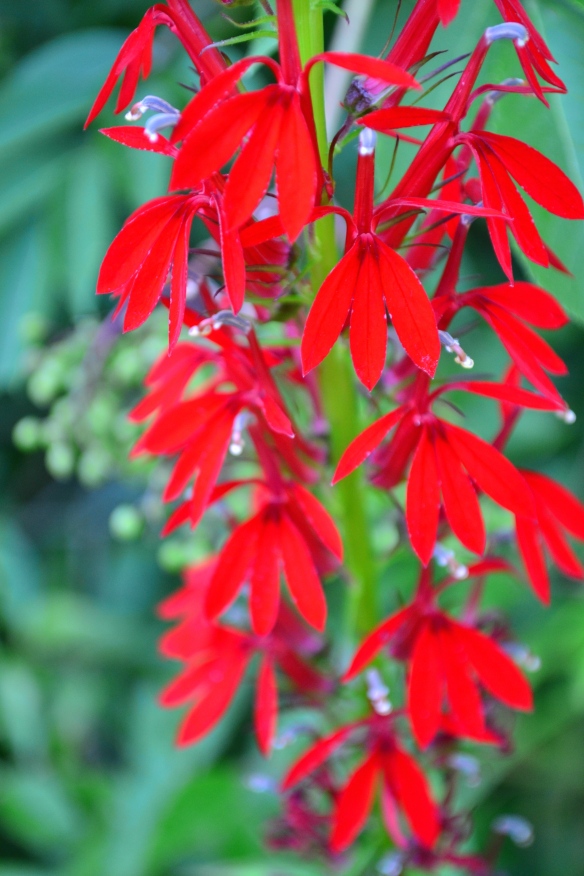 Cardinal flower, a wildflower that grows on the edges of the stream. 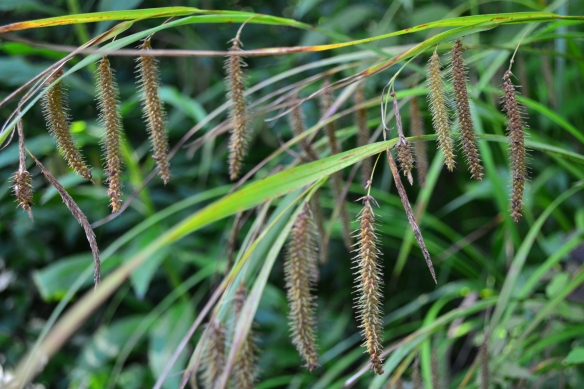 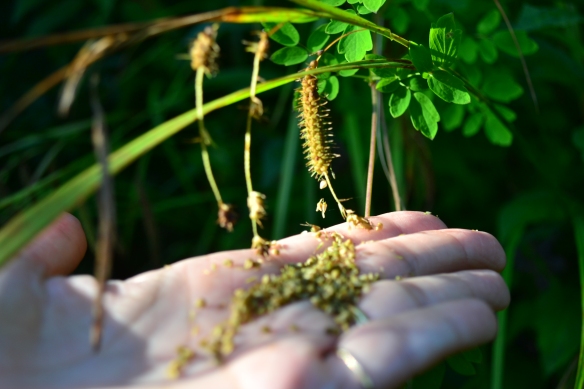 This sort of thing made lovely “flour” in my outdoor kitchens growing up. 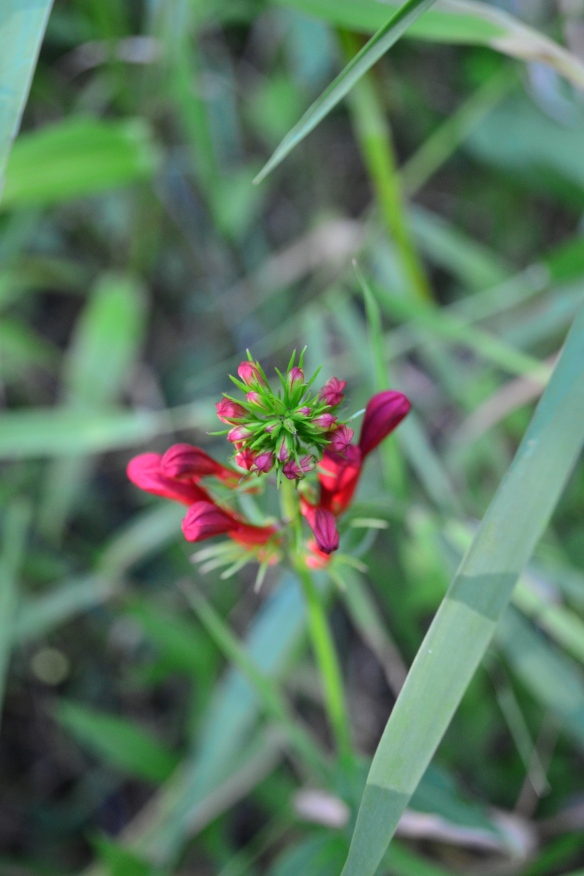 The buds of a Cardinal Flower. 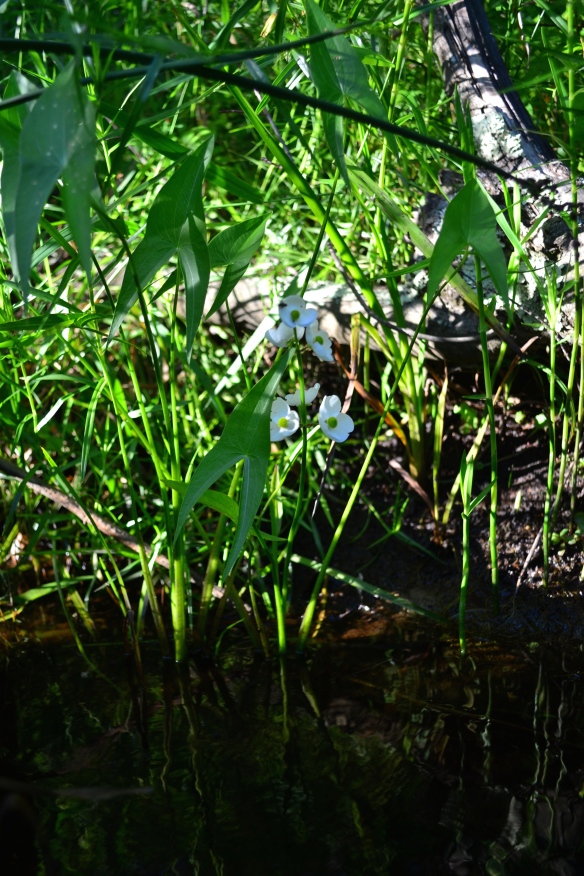 Arrowhead, an aquatic wildflower, according to the nature guide, “Beneath the muck, rhizomes produce edible, starchy tubers, utilized by ducks and muskrats and know as “duck potatoes.”  Native Americans are said to have opened muskrat houses to get at their cache of tubers.”

I find this sort of thing utterly fascinating, do you? 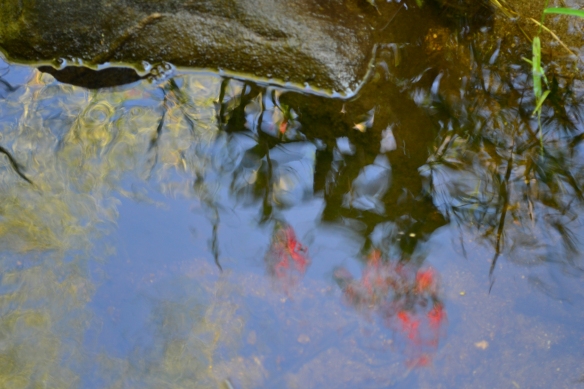 I was walking through the stream in my flip flops and noticed reflections of cardinal flowers. 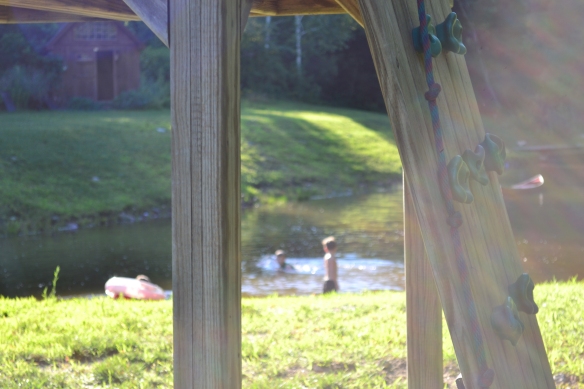 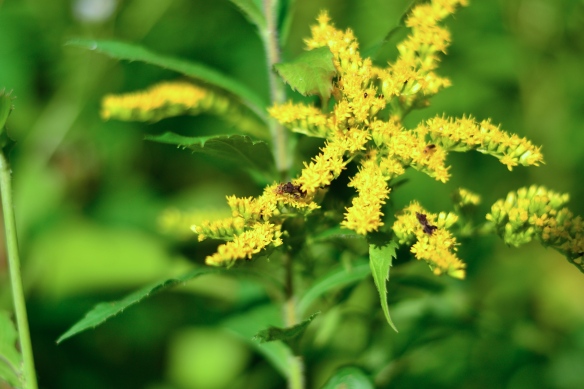 Goldenrod, with lots of little bugs on it.  “As suggested by their showy flowers, goldenrod are insect-pollinated.”  You can always see some neat insects on a goldenrod. 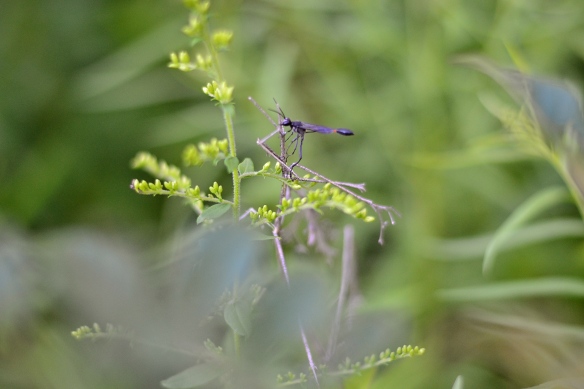 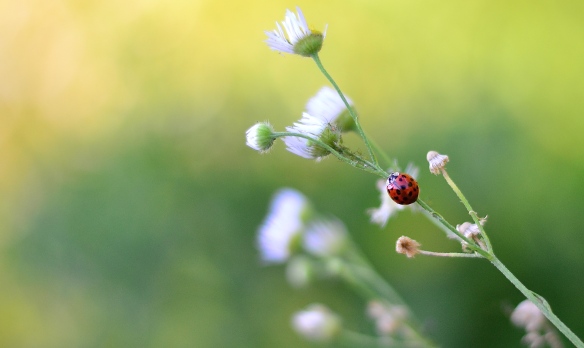 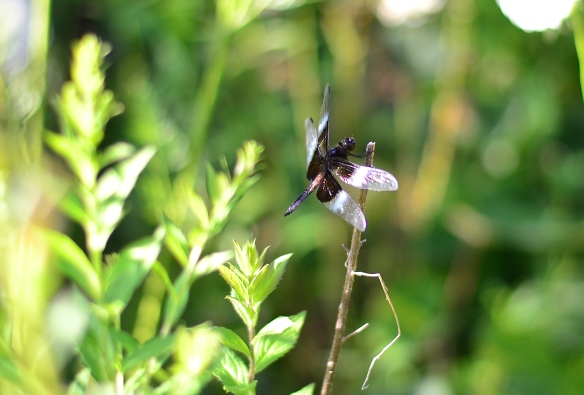 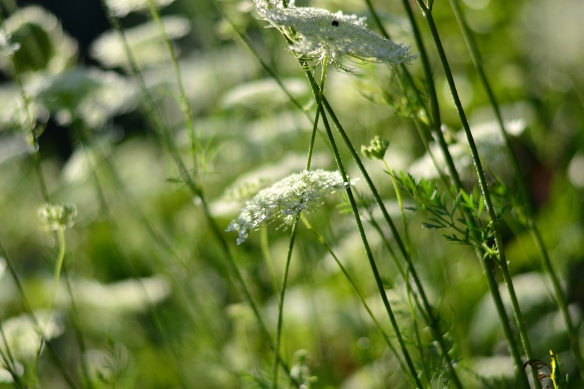 hmmm, I should try it. 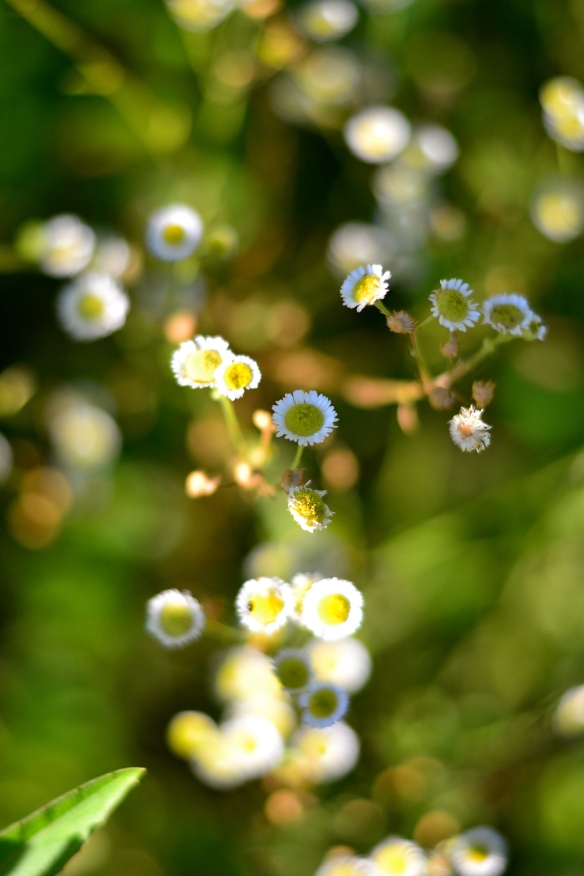 Daisy Fleabane, “the common name fleabane originated from a belief that the dried flower heads of these plants could rid a dwelling of fleas.”

Perhaps I should decorate my cats with them. 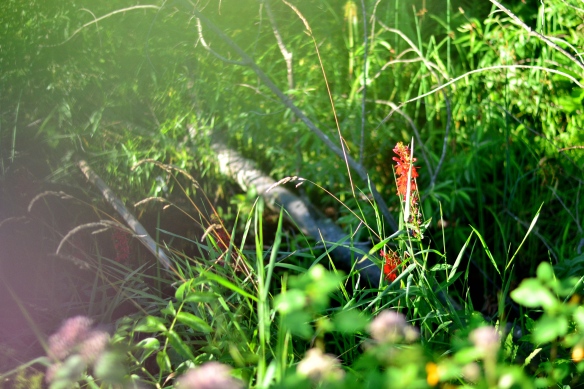 Cardinal flowers are pollinated by hummingbirds and I caught a glimpse of two tiny birds becoming territorial over them…..so I sat on a large rock and waited for one to come back.

It’s a photo that I never did get to take….they won in the “patience game”. 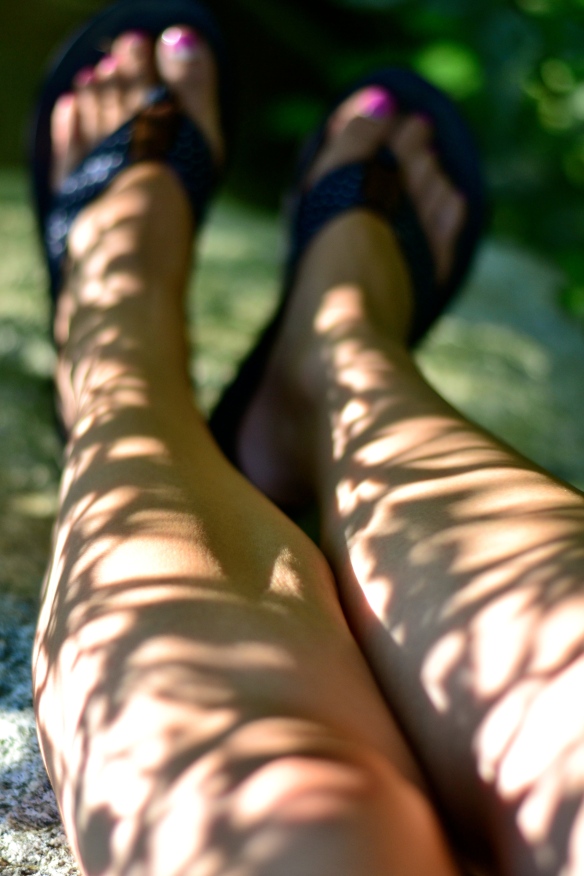 I thought the shadows on my legs were pretty cool. 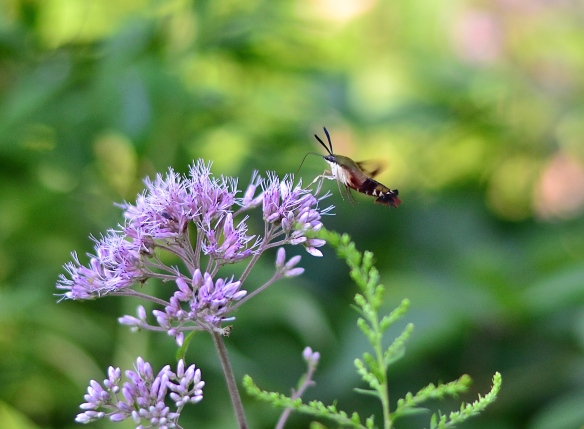 You don’t see the hummingbird moth everyday.  They are so neat! 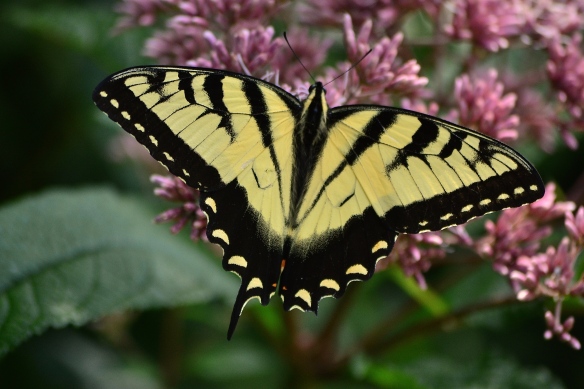 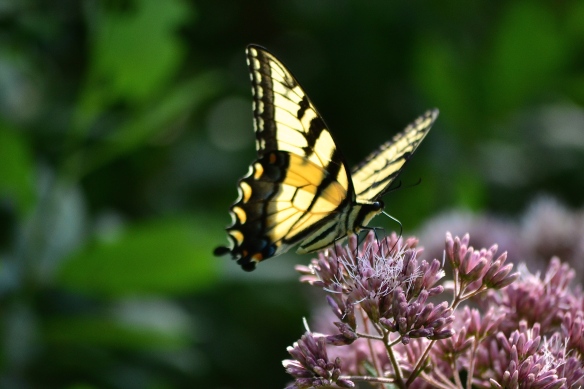 The thing is, if you just slowly walk near tall wild grasses, through fields, through any wild place, or even in the city…look carefully at the leaves and flowers of any plant you see…it will be such a interesting experience for anyone.  I took most of these pictures within one hour of time, and I saw many more insects and birds that I wasn’t able to get photographs of; grasshoppers, hummingbirds, the caroline wren (a sweet little bird), and others.  Then, there are caterpillars, so many different ones, and all so interesting.

Yesterday the children and I walked around with Sarah’s little bug container and we caught a ladybug which she named Red, a small butterfly which she named Orange (it was….orange), and a grasshopper she named Grass.  We put a head of goldenrod in it.  It had such tiny black bugs on it that they were able to escape through the mesh of her container.  She kept these little pets for a couple hours, and then released them again.

“Out here you can hear the rhythmic hum of silence.  Listen, there’s music in the grass.”

I think the music comes from all the little insects and butterflies, and our hearts as we enjoy making wondrous discoveries.

7 thoughts on “life in the sunshine”