I woke right up this morning thinking about the ring.  I fell asleep last night thinking about it, too.  I’d rather not blog about it.  Suffice it to say that I lost my Tiffany ring that Rich gave me for our anniversary a short 5 months ago.  I have looked all over the house, cleaning as I go.  If you ever want to get Spring Housecleaning done in February might I suggest losing something tiny and valuable in the house?  It’s been remarkable how much I’ve found but mostly dirt and dust, about 1,000 marbles and legos, bobby pins, small change, pony tail holders, an earring that I thought was gone forever, a set of keys, crayons, pens, and pencils, but no ring, and oddly nothing belonging to my poor husband.  Only crap that belongs to myself and the children.

This morning Sarah and I went to town.  I had to go to the Post Office, which I don’t like doing, and I was struck once again by the cheerful attitude of my little girlie who doesn’t mind going out into the cold with Mama on a constant basis.  She puts her hand in mine and we go. “Mom, remember.  Cars go FAST.” she says as we cross the street.  We bought a bag of books for 2 dollars at the thrift store.  We went to the grocery store and then home again to read them. 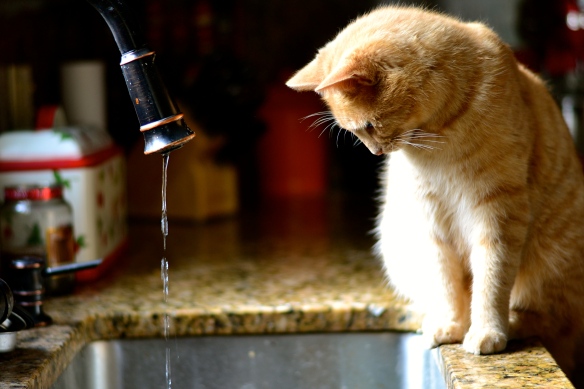 The cats are always inside now that it’s been so cold.  Billy amuses us all the time.  Today he decided to get a drink from the kitchen sink. 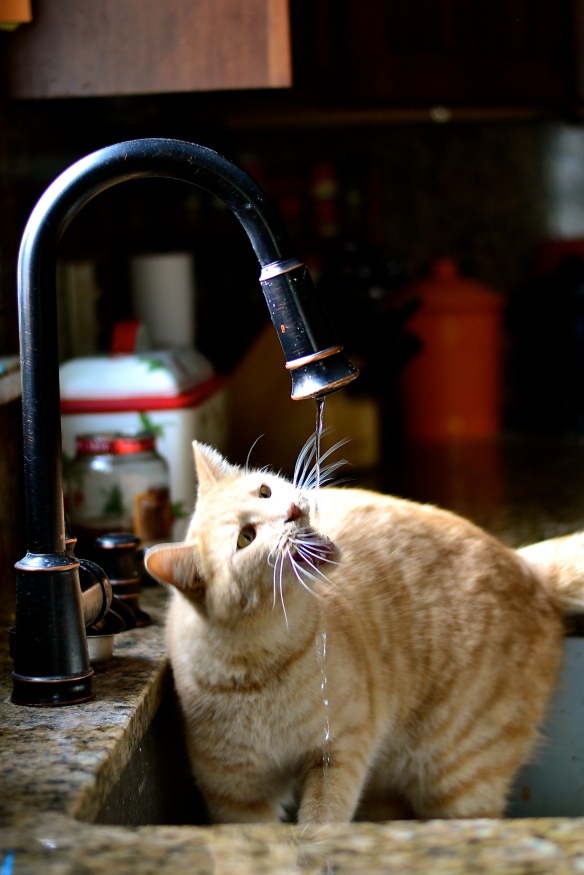 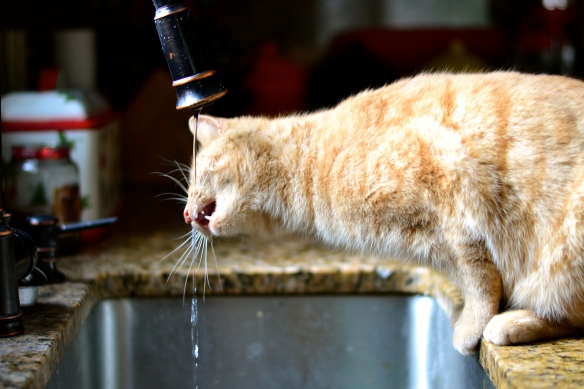 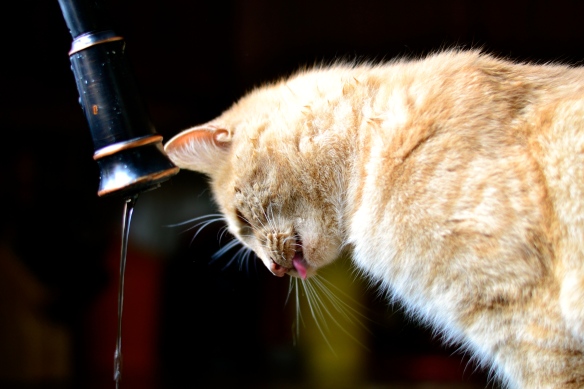 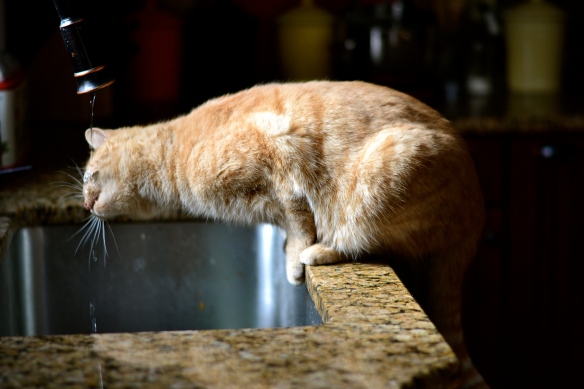 I began taking way too many pictures of Billy drinking water from the faucet. 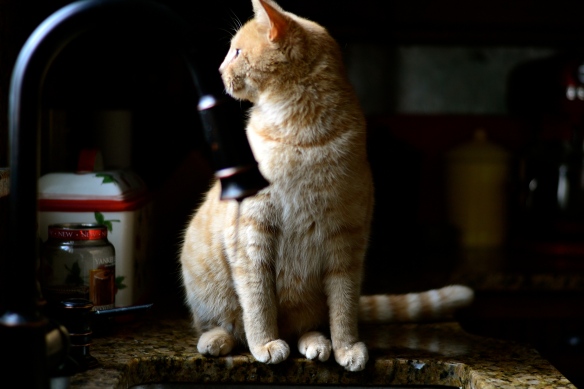 Then something caught his eye and he forgot all about the water.

What could it be?  He stood up on tip toes. 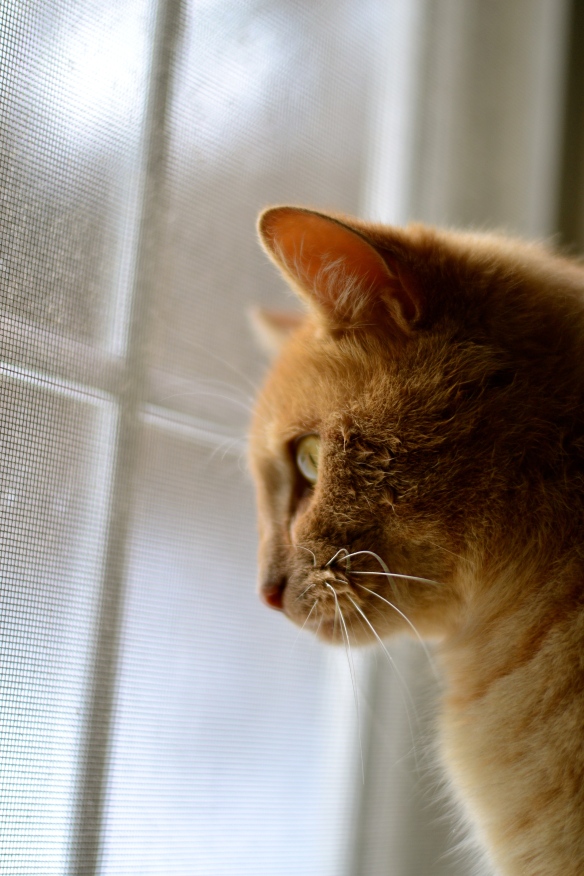 And he pressed his orange head against the screen.  His tail was twitching.

Birds.  Lots and lots of birds.  They were politely taking a seed and flying right by the kitchen window in front of the orange cat.  He wanted so badly to go and catch one but I said no.

I poured my coffee and invited him to sit with me for a chat instead.

He had a hard time focusing after all the excitement of water and birds.

“I’d rather have bird.” he says.  “Also I would rather scratch you.” he confesses.

Grace is shrinking.  Either that or Davy is growing taller.  I’m not sure. 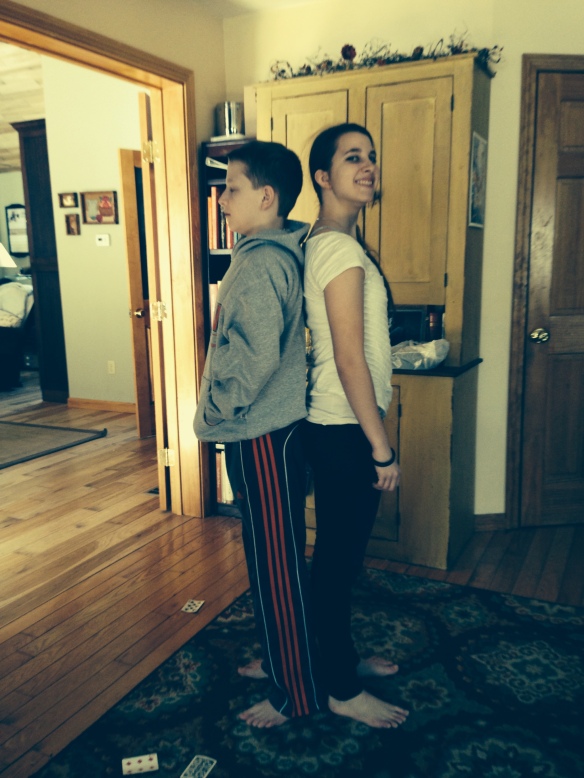 She is 15 and he is 12.  It’s an odd thing to see the little brother catch up in height.  His feet are already bigger. 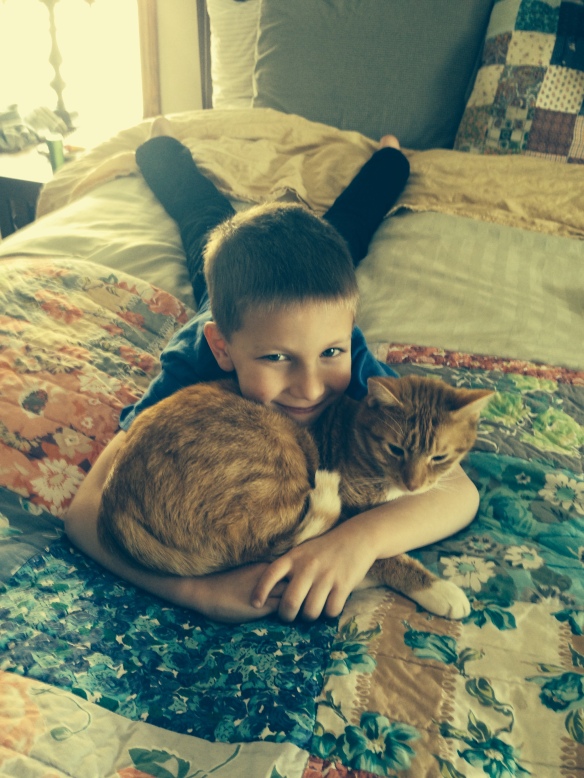 This was my napping buddy yesterday.  The children had no school because it was (NOT A SNOW DAY –I know hard to believe!) President’s Day.  I read Seth a chapter of Henry and Ribsy, by Beverly Cleary.  And then we fell asleep back to back in the big bed.  He’s the apple of my eye.  Rich and I took him to his wrestling  tournament (states!) on Sunday and he placed 5th.

Back to the Ring Saga:

Last night, Rich pulled the washer and dryer out to check for the ring.  The boys were right there watching the entire time.

At dinner Rich prayed and thanked the Lord for the food.  Before he forgot, I interjected, “And please, dear Lord, help me find my ring,” prompting Grace to groan aloud, “PLEASE!”  “Amen” said Rich, and when we opened our eyes Jacob expected the ring to fall from the sky onto my plate.  If only!

David read this in his book last night: 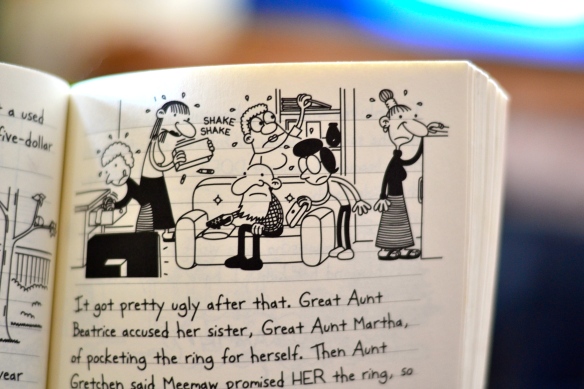 This picture does a good job at illustrating what’s been going on in my house.  I’m the one in the long striped skirt.

Sarah watched “Finding Nemo” for the first time yesterday.  When I tucked her into bed she asked, “Mom, can I watch ‘My Me Me Mo’ again tomorrow?”

15 thoughts on “the ring, billy cat, someone growing, the ring again, and a quote from sarah”