“After a mouse has been studied it should be set free, even though it be one of the quite pestiferous field mice.  The moral effect of killing an animal after a child has become thoroughly interested in it and its life is always bad.”  ~Anna Botsford Comstock

GOOD morning!  How are you today?  Did you have a nice Labor Day weekend?  We did, too.  A little bit of everything…rest, play, work, fun, and so on.  The children are back to school today and I just taught little Sarah how to use the vacuum cleaner to clean up her own cookie crumbs.  She did a great job.  Now she’s going to watch Franklin (the turtle cartoon) until I’m done with my blog-writing, and then we’re going to the library for some new story books to read for the week. 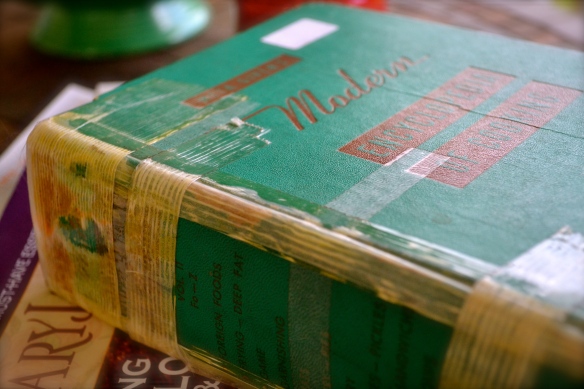 Do you know what I think is fun about life right now?  The unpredictable way of it, the way you can take a break on the porch with a stack of cookbooks and be interrupted by a mouse!  Or when you host a Bible study at your house and someone’s grandparents bring you a bag of fresh garden beans.  Or, when a little one is too sick to go to church and you end up going for a walk and find ripe grapes!

Who would have guessed these little events would happen to us this weekend, just small parts of the whole of course, (we did much more), but these are a few of my favorite things that happened in our family as we moved from August into September……..and enjoyed an extra day in the week-end.  *I love my family* 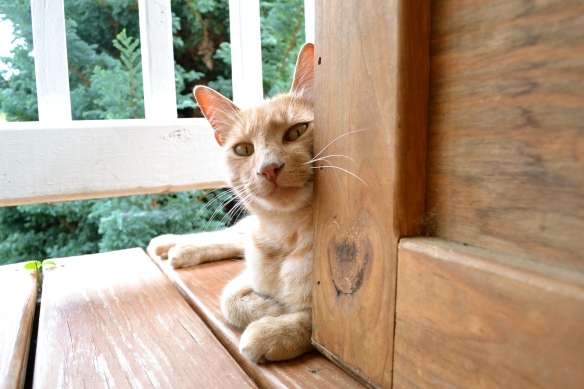 “I SMELL A MOUSE” 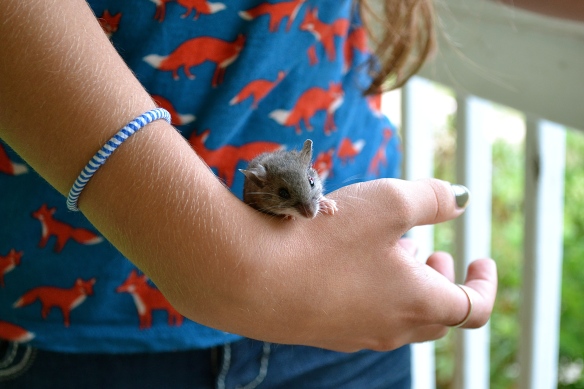 I was, like I mentioned, sitting on the porch looking up recipes for green bean side dishes…..when superhero David rescued an adorable deer mouth from the jaws of death.  He promptly put it in a bucket and gave it a cheerio.  Seth was an onlooker, looking but not touching, but then when big sister arrived on the scene, she promptly named him TIMMY and picked him up!

I had told the boys not to touch it.

David was offended because it was HIS MOUSE.   And she wouldn’t give it back!  She said she loved Timmy.

She tried to put Timmy back in his bucket but he ran up her arm!

So she kept him longer.  She said he loved her, too! 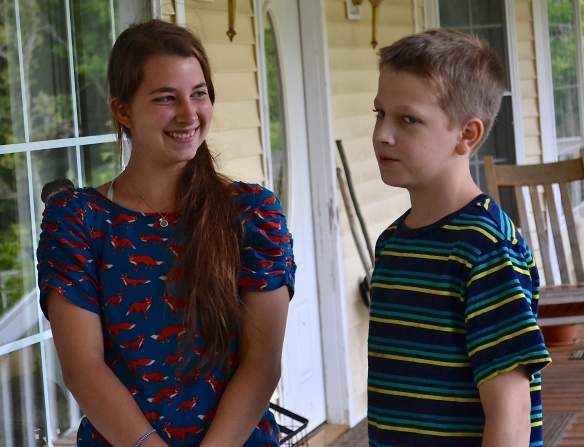 David continued to be annoyed. 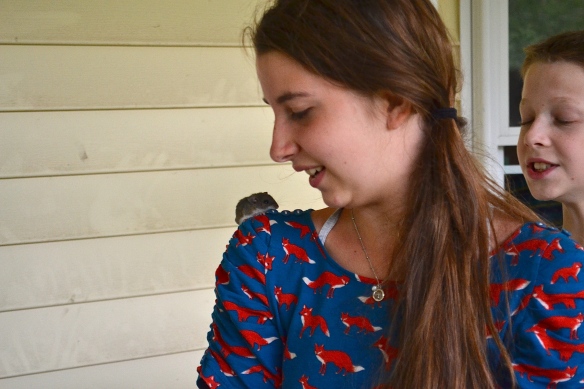 Annoyed and stressed out.  Grace was bonding with the field mouse.  It is my belief that the mouse was in shock and didn’t know what was going on.

They started going into the house to show Dad but I began to yell about how unwise that idea was……what if Timmy got away?

So Grace came back, yelling at her brothers to stop trying to take him away from her…..not sure what Sarah’s doing…..

Grace, Seth, David, and Sarah marched in a line to the woods and released the mouse with blessings for a long and happy life.

I left the porch and set to work on my green bean side dish.

I used a recipe from the old cookbook Kara gave me through the mail (thank you, dear dear friend!!)

The beans were wonderful.  I washed them, trimmed them up, and cooked them in a pot of water until they were just right (we like them soft).

Meanwhile, I fried three slices of chopped bacon and then sautéed finely chopped onion (3/4 cup) in the bacon grease.

When the beans were done, I added them to the onions and bacon, and seasoned them with salt, pepper, and paprika. 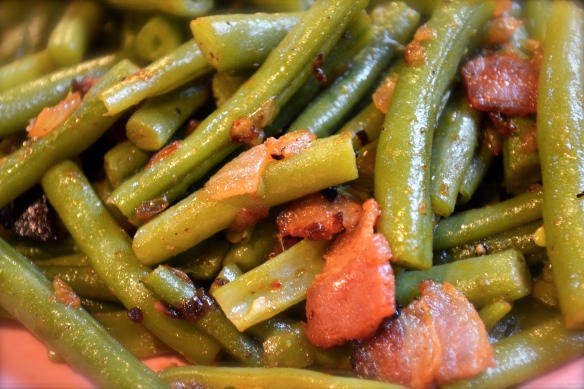 Rich and I ate them all for dinner (that’s all we ate).  Grace tried them, too.  They were delicious.

I took this picture while the beans were boiling.

We had a strange little illness go around the family…consisting of a stomach ache and head ache.  Sarah threw up one night, but the others just had the aches.  Caleb had it in the night before church and said he couldn’t go, he “just couldn’t stand it” if he went to church.  Consequently, Rich left with the other children and I stayed home with Caleb…..after resting all morning and giving him Advil, I decided it wouldn’t hurt for us to go on a gentle stroll down the road. 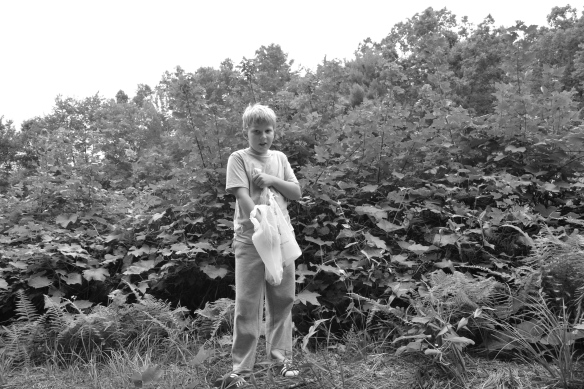 He took a plastic bag in order to collect wild concord grapes.  They were sour; our walk was punctuated by the sound of him vigorously spitting them back out…….I politely refused his generous offers of grapes from the bag.

They are abundant this year……and smell so good, much better than they taste.  However, Rich also likes eating them.  Later on, he was delighted to discover Caleb’s bag of them on the kitchen counter.

I made jam from them last year but we still have a few jars left so I’m not tempted to do anything with them this year.

I hope you have a wonderful day where ever you are, school, work, home….isn’t it marvelous that God sheds his blessings (big and small) on us no matter what we’re doing?  I’m thankful for time to get things done, an opportunity to write to my friends here in blog-land, a trip to the library, a beautiful warm day, with health and energy to do what I need to do for my family.  God is good.

“Gentleness towards self and others makes life a little lighter.”  Deborah Day

12 thoughts on “timmy the mouse…beans…concord grapes”