“If we ever get into the money I am going to have a kitchen where everything is my height, and none of this pigmy stuff, and maybe 4 ovens, and 12 burners all in a line, and 3 broilers, and a charcoal grill, and a spit that turns.”  ~Julia Child’s dream kitchen, from a letter she wrote to Avis DeVoto in the early years, before cookbook, before fame.  She was over six feet tall so I imagine stooping over regular height counters and stoves got to be tiresome at times. 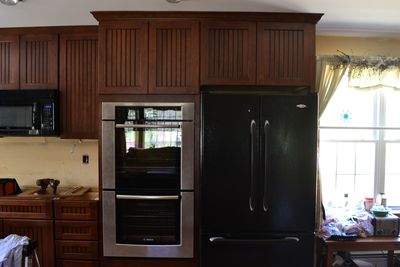 My own dream kitchen is coming along nicely.  The double oven has been installed and I have used it several times.  There is now crown molding above the cabinets, which I think is so pretty. 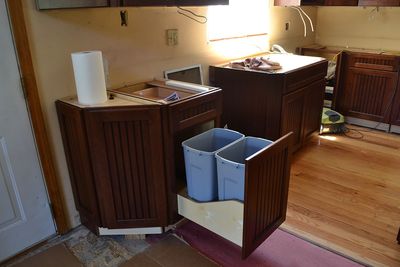 A cabinet detail of “where the garbage will be” (to answer Joanna’s question).  There is a bin for the trash and one for the recycling. 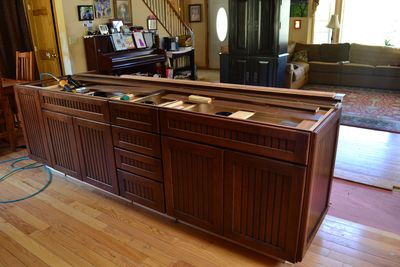 A picture of the island before the countertop was installed.  There are 2 big drawers, and four smaller ones, and 2 big cabinets with pull out shelves. 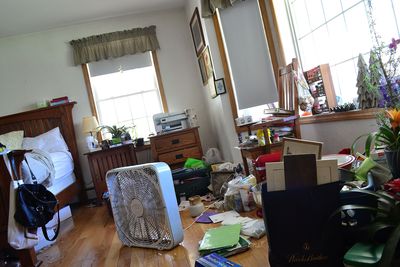 The master bedroom is a shambles, full of kitchen items and livingroom stuff (while it is being painted).  I have so much to do to get the house in order. 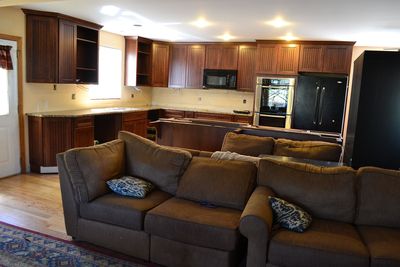 This was the day the granite was installed (I think it was Monday).  The couches were in the middle of the room for painting. 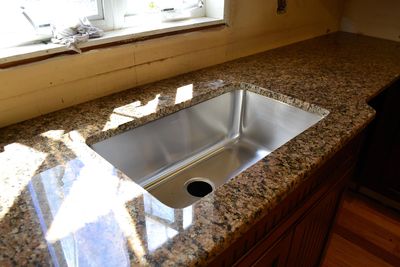 The granite was installed and the sink was put in place. 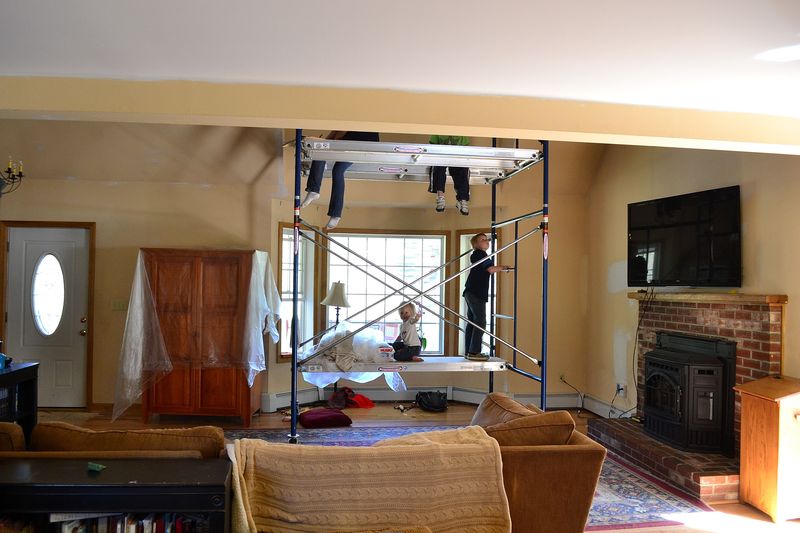 Scaffolding was put up and left in the livingroom for several days.  The children loved it.  Meanwhile, Rich and I had to take everything off the walls to add to the piles in our bedroom. 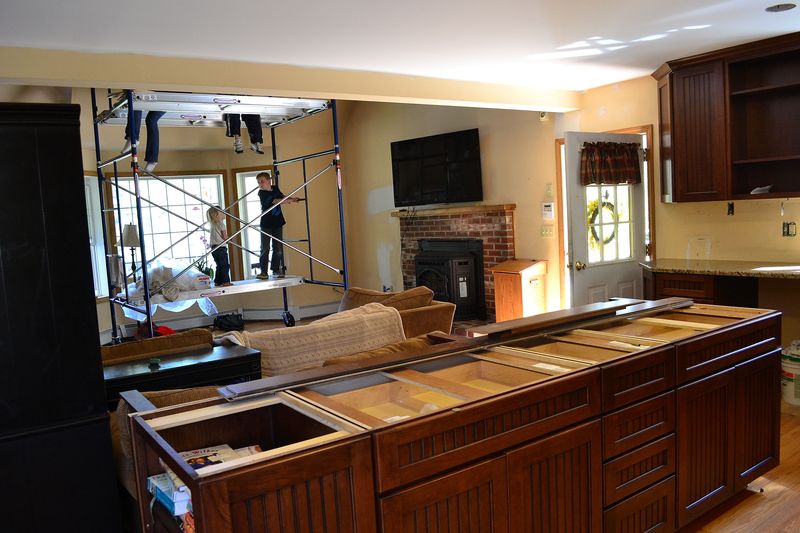 We had rain yesterday but during the other days the weather was beautiful.  It was so dry and warm that we could keep the doors and windows open, which was very nice when dealing with dust and paint fumes.  It was also nice to take Seth and Sarah outside in the mornings to stay out of the way. 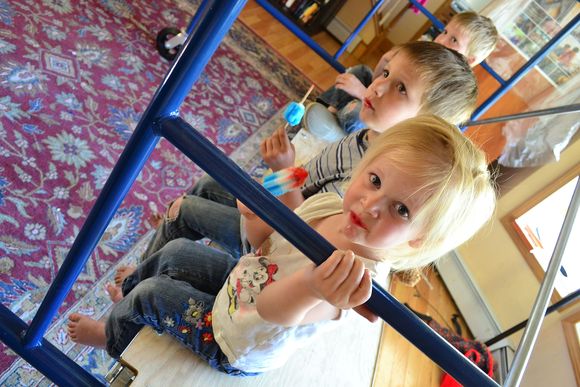 Caleb, Seth, and Sarah ate popsicles on the scaffolding.  It was taken down yesterday and they were all sad.  So cute. 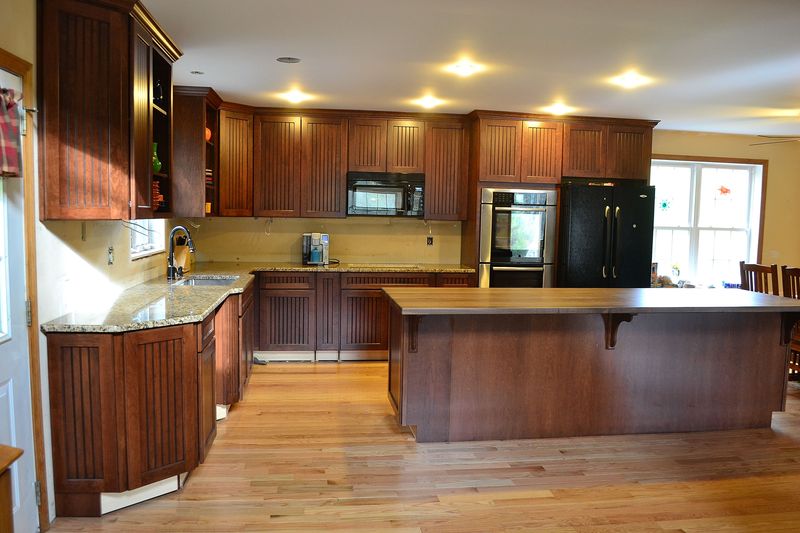 Yesterday the wooden top was put on the island and the faucet was put in place.  I spent some time putting some things back.  It’s starting to look lovely. 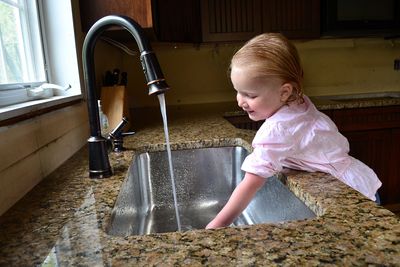 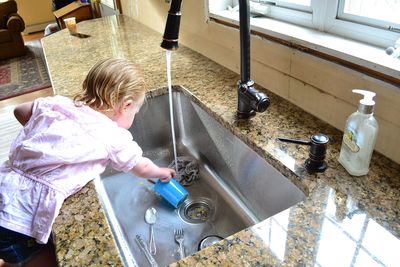 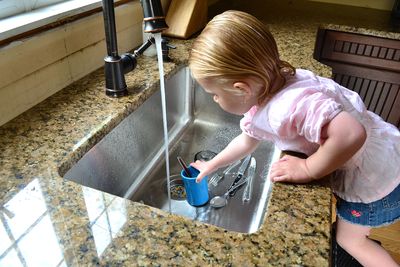 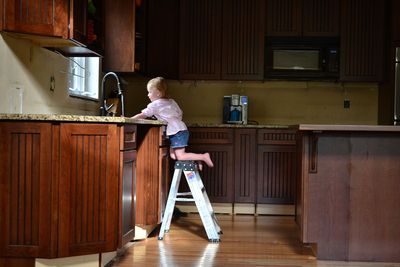 I gave Sarah a bath this morning and then she played at the sink.   The new sink is a stainless steel single basin and deep.  When we picked it out Rich said it would be nice for me to give babies a bath in.  When I started to swoon, he quickly said, “Not that you’ll have anymore of your own, but you will have grandchildren.” 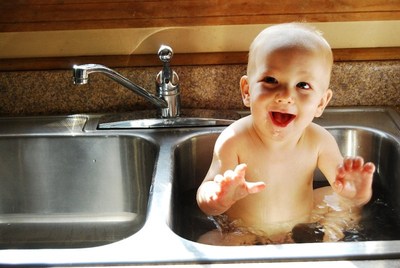 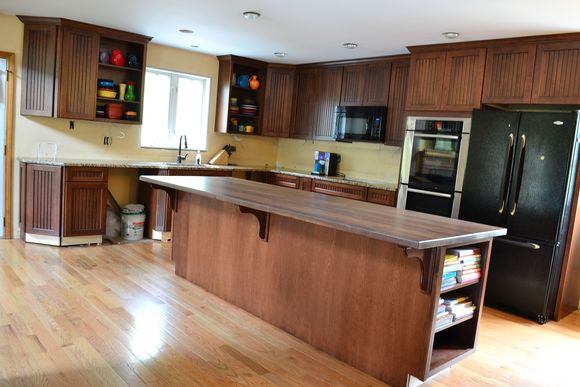 We still need the dishwashers and range top installed, stools to buy for the island, and the granite back splash put in place.  We also have under cabinet lighting, hardware, a new light fixture above the sink, and the trim work to do before it is completely finished.

I started putting my fiestaware in the open shelving.  Doesn’t it look pretty? 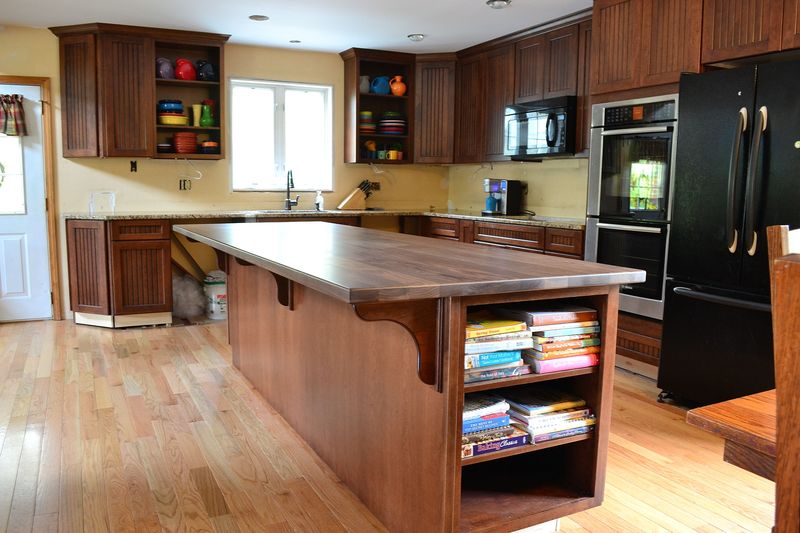 We are so thankful for our fresh new kitchen! 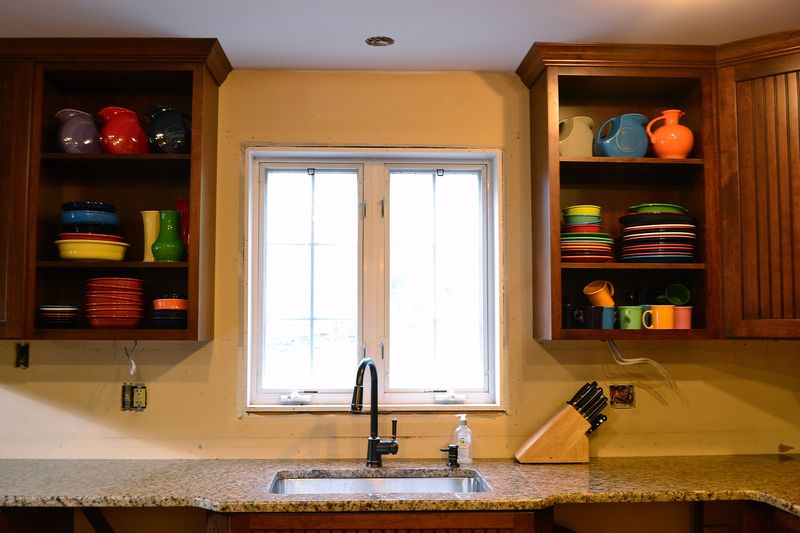 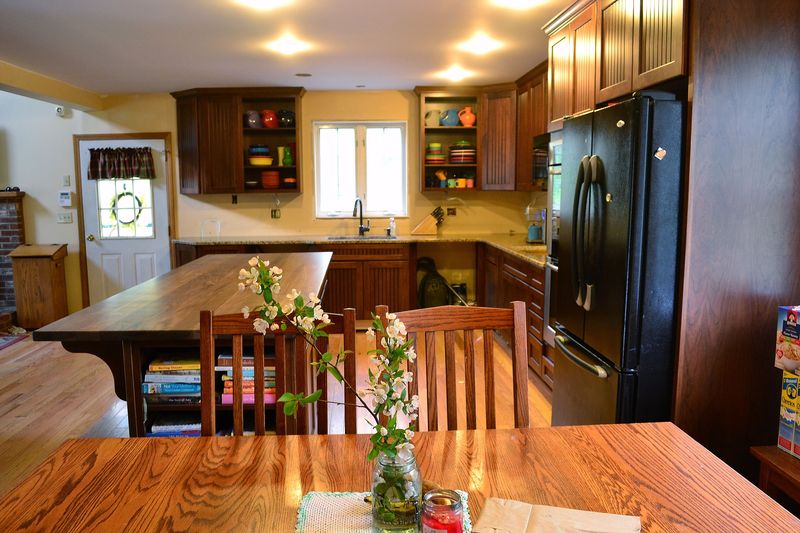 Once the new addition is done, the table will be out of the room which will give us plenty of space to use the kitchen and island.

Despite the chaos, I still try to keep flowers or a candle sitting pretty on the table, because beautiful things are so uplifting.  Today I have an old blue mason jar on it, with a simple twig of pinky-white wild apple blossoms, which I picked the other day from the edge of the woods.