(I like to write stories now and then for the children.  I hope you enjoy it.  Feel free to read it out loud to your youngsters!)

Yesterday, on a beautifully cool summer day, David (who is 8) and Caleb (who is 6) made their own fishing pole with a long stick, a long string, and a fish hook.  They found a pale yellow slug and baited their hook with it.  Then, they went to the pond to fish.

Before I knew it, they were walking briskly back, side by side, and smiling big.

“Mom! Mom!” David cried.  “Caleb caught a fish!  Come see it!”  I laughed when they ran to meet me, with a big coffee mug brimming to the top with pond water.

I looked inside the mug and there it was swimming in a panic, ’round and ’round.  “Isn’t it beautiful?” asked Caleb, proudly.  I looked at Caleb, and then at the fish.

It was quite a small fish, and I could see why he thought it was beautiful.  Fish are beautiful, if you stop to think about it.  Especially if it’s the first one you ever caught.

While I took care of the other children and forgot about the fish, the two busy brothers put the fish in an old pot, high up on a shelf in their bedroom.  They named him Lego and took care of him all day.

They left their fish to help me make pickles (see previous post), and as soon as we were done they ran downstairs to their room.  “Let’s go check on Lego!”

I went downstairs to see what was the matter.  The fish was back in the pot by the time I got there.  “What was he doing?” I wanted to know.

“He was just lying right there on the floor, trying to breathe!”  There was a wet spot.  Lego was desperate to escape.

After that incident, I helped them find a taller fishtank.  It was an old big ice cream tub from Schwan’s.

Want to see a picture of him under his lego lily-pad? 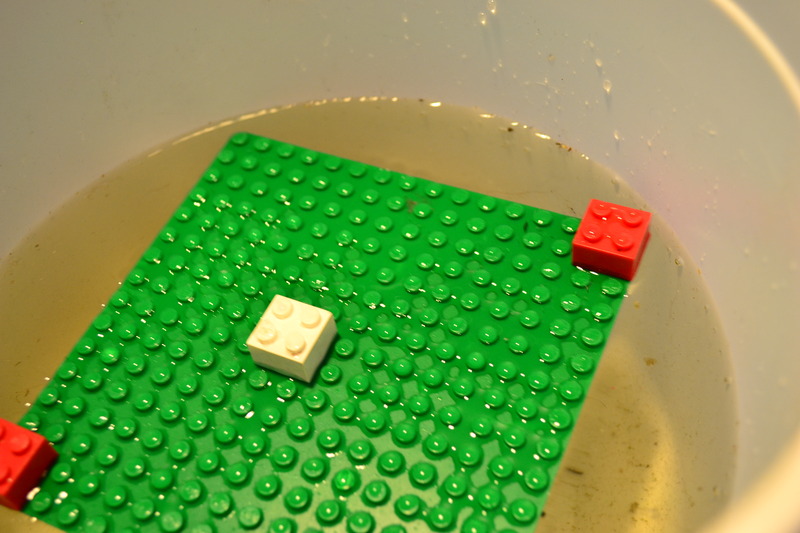 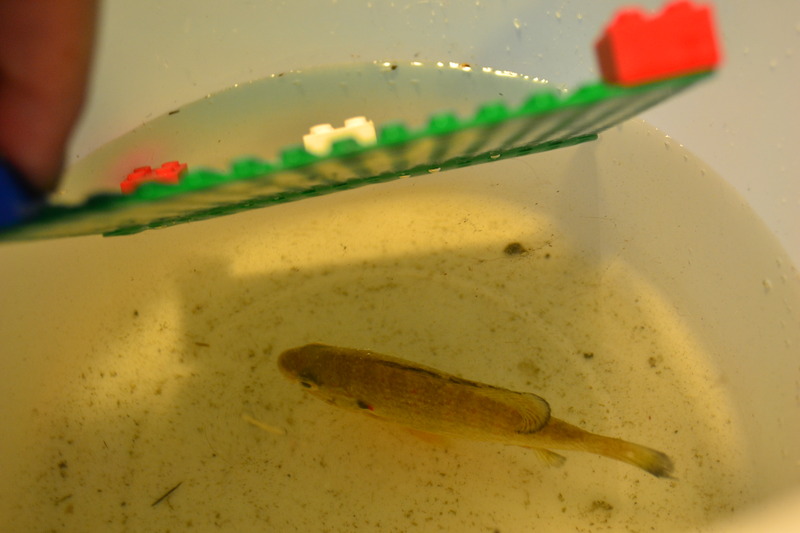 Even in the pouring rain that afternoon, David could be found under an umbrella, finding worms for Lego.

Lego was fed, talked to, and gently poked at.

He wasn’t moving at all.  In fact, he was stiff.  And, he was over on his side under the water!  But, how did we know he wasn’t just sleeping?  “Because his eyes were open.” Caleb said.

Well, just in case he really was just sleeping, Caleb and I walked outside and poured him back into the pond.

This afternoon, when I read this story to the boys, they ran outside to see if he was still where Caleb had left him and he wasn’t there!

I will leave you to decide whether or not Lego is alive.

And that is the end of the fish tale, which is where fish tails usually are.  On the end.

0 thoughts on “a fish tale”