(Well, this first picture is from yesterday.) 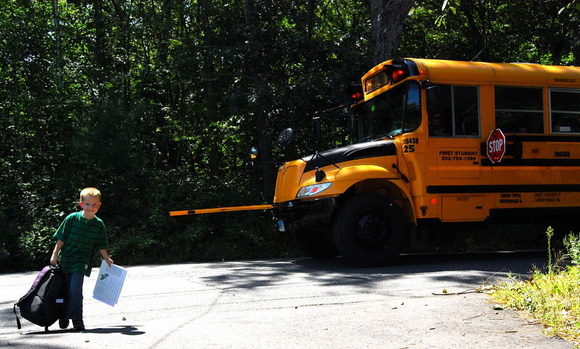 He did fine, absolutely fine.  He really didn’t talk my ear off, I had to ask creative questions to get information out of him.  A couple of things I found out:  He was too shy to participate in gym class.  He just sat and watched.  And, he did not realize that school was every day.  He said to me, as he ate lunch, “I want to go back there again sometime.”  Soooooo, I was a little alarmed-like and told him, “David.  You’ll be going to school every day, except Saturday, Sunday and holidays like Christmas.”  “MOM!!!!”  (which meant:  “How dare they close school for those days?  I want to go every day.”)

This morning, while we waited outside together in the cool morning air, for the bus, I talked to him about being shy.  I told him that today his special class would be MUSIC and that he would probably be shy but I wanted him to still participate, and that he would like it.  I told him I would pray for him about that.  When he got home I asked him how it went and he said, “I did it, Mom, but I never got to be IT.”

My xanga pal Jenny suggested that I take some photos of the older children back to school, too.  So, I did that today.  Yesterday was a little rough for me, because I was drained, emotionally, from sending David to school.  The day went well, but today was MUCH MUCH better.  It is so nice and quiet here, with Davy-do busy at school.  Caleb is easy to keep quietly busy, and the older three and I had such a nice morning of home-school, and I felt quite productive.

We began the day with a few hymns:  “O Magnify the Lord With me”  “A Mighty Fortress is our God” and “There is a Redeemer”  (they each picked one).  I play the piano while they sing.  I sing when I can (I still have trouble, playing and singing at the same time).

Here are the pictures of the day: 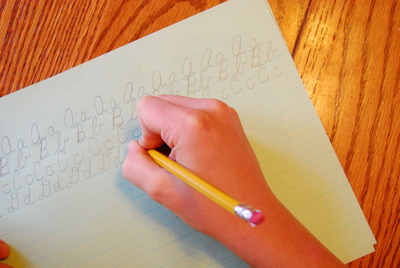 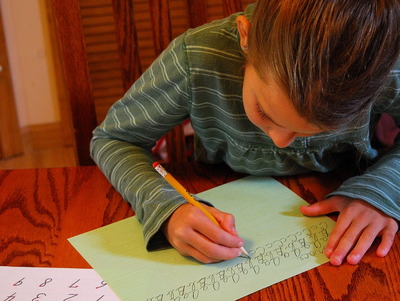 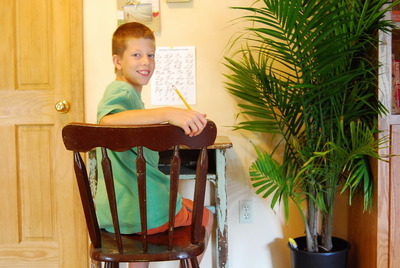 Caleb did some coloring~he colors all the time. 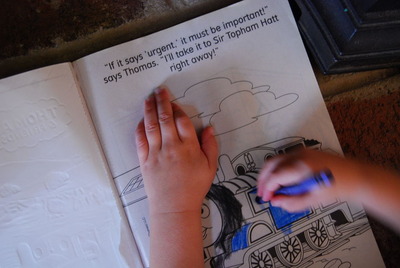 We spend most of our time at the kitchen table, Jacob is looking up at the handwriting display paper, on the cupboard. 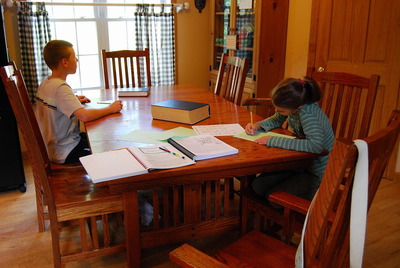 We spent quite a while with this next book. which I really like.  I read aloud, and we learned all about celebrating the Sabbath.  We will be celebrating it together as a family, next Saturday. 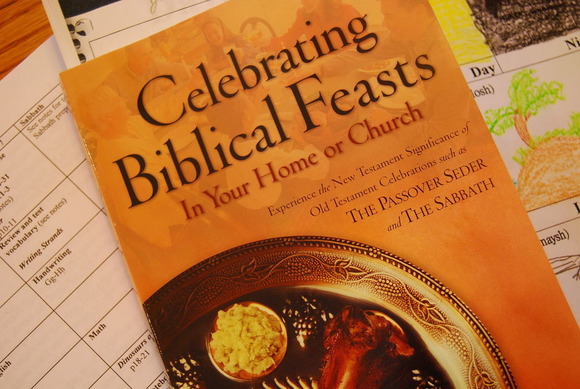 Grace, later on, reading about Dinosaurs~ 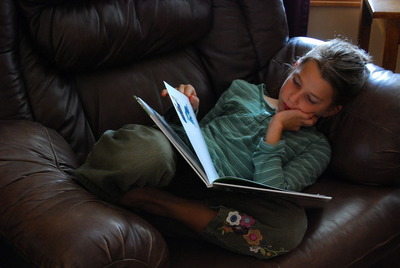 Ethan and Jacob were still waiting for their Math books to come from A Beka, so in the meantime, Ethan did a “Math Window”. . . . 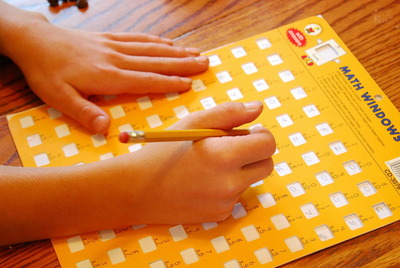 . . . .while Caleb and Mama mixed up cookies for Davy-do, who put in a special request. 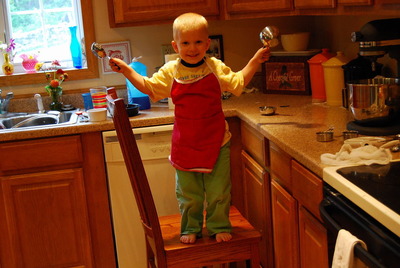 “Don’t put your hand in there, or the mixer will break it up into pieces”

You should have seen him break the egg, the whole thing went in.  Thankfully the shell was in two pieces so I could easily fish it out. 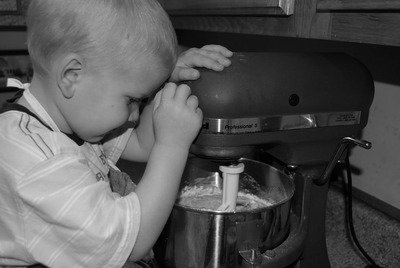 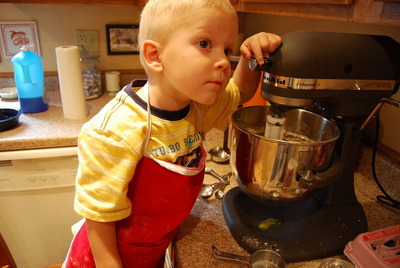 What’s he looking at?  ***He was looking at his and David’s picture, in my cupboard:*** 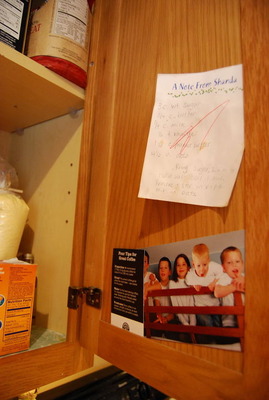 David came home just as we were finishing the cookie dough.  So, everyone got a scoop of raw dough on a spoon (yes, I’m one of those sorts of mamas) and then we left, to go to eat lunch at McDonald’s.

That is where I got my headache.  LOL

It is hard, to take the children to a play place.  They are so loud, and make up games like, “Let’s try to stay away from Caleb”  which means they run screaming if they see him.  I took magazines so that I could relax after we ate, while they played, but I only got through half of one.  It was C-R-A-Z-Y. 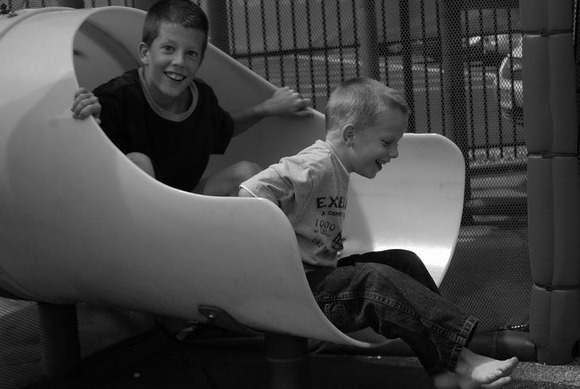 I was glad that we had the playplace to ourselves, it would have been even more chaotic if Others were involved. 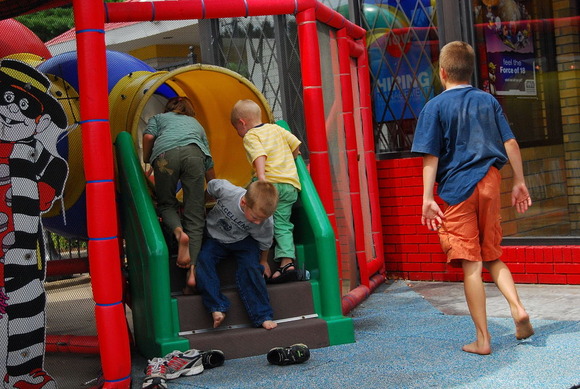 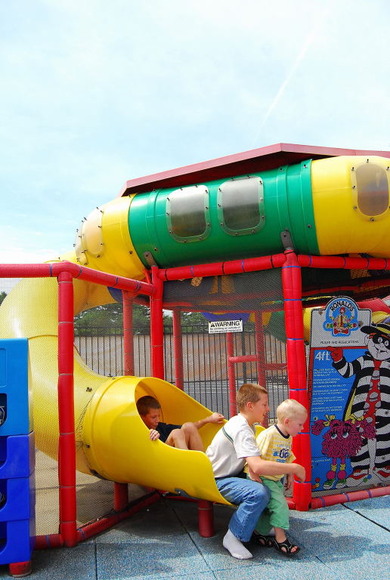 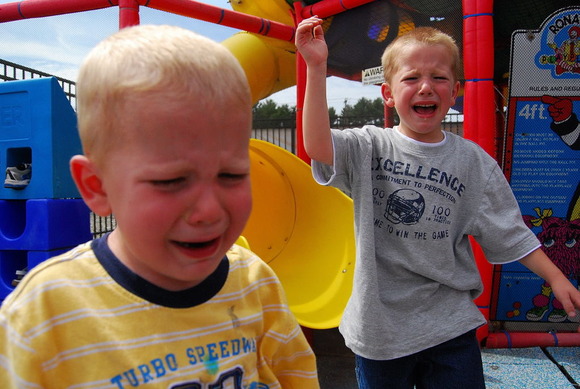 They knocked heads, coming down the slide, this is real-life, folks!  LOL 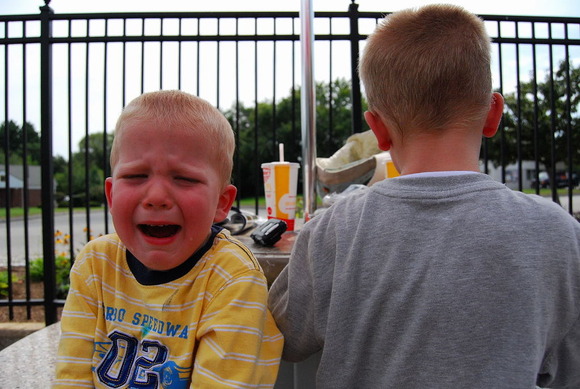 Oh my!!! they were loud, and so we left.  We all had enough.  After refilling our drinks (I only buy 2 and we share, it’s great for building up their immune system, just like the raw cookie dough consumption, LOL), we got into the van to take the older children to their Art class at our friend’s house.

I took a picture of the five Art students.  They were wild-acting and crazy and as I left, I begged my friend to try to calm them all down.  Life is just so exciting when you’re this age, you just MUST laugh, yell, and be silly, now and then.  Also, I really don’t think McDonald’s playplace and bright orange drinks are the best things to do right before Art.  What was I thinking? 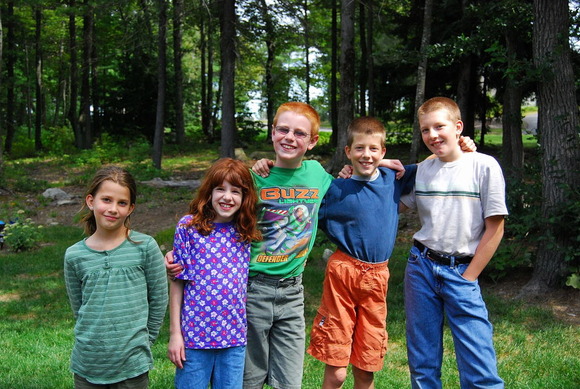 When the little ones and I got home, we found the A Beka order on the porch.  Won’t Jacob and Ethan be thrilled?  (I already had Grace’s book).  I also bought the boys each a penmanship book (Grace has one), and one 6th grade health textbook, to do all together. 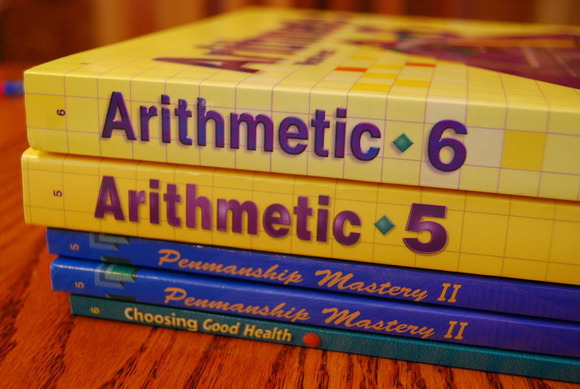 So now, I only have about five more hours to get through, before my husband gets home.  The only time I shed tears today, was when he told me on the phone that he had a function to go to after work.  Another dinner without him.  Ugh.  We are both looking forward to the long weekend.

Ummm, let’s see. . .oh yes.  Someone asked about the pregnancy.  I am feeling fine, absolutely normal except for the extreme tiredness.  I get sleepy in the afternoons and am usually sleeping by 9 or shortly after, every night.

I had a doctor’s appointment on Monday, which went well.  I heard the baby’s heartbeat, and fell in love a little more (it’s so fun, to daydream about newborns).  An ultrasound was scheduled, for September 24, which is The Day that I hope we can find out if the baby is a boy or girl.  Grace has been doodling, “Lydia May” on scraps of paper. . . . . . .we shall see. . . . . .

I can wear some of my stretchy-type pants and skirts still, which is nice.  I’ve gained about 10 pounds but I feel great.  (**yawn** except, I’m tired)

The little boys are in bed, and have calmed down, so I’m off to go try to read for a little bit.

Hope all is well with you, friends.