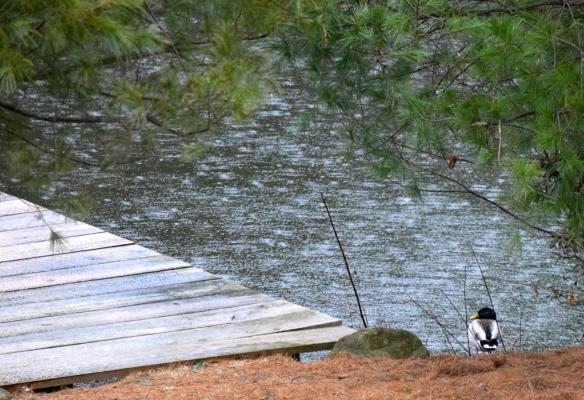 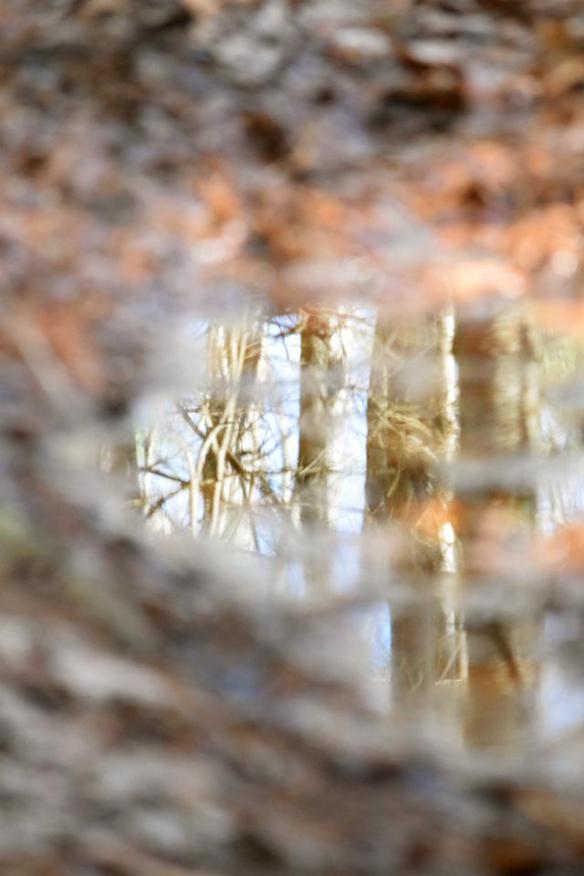 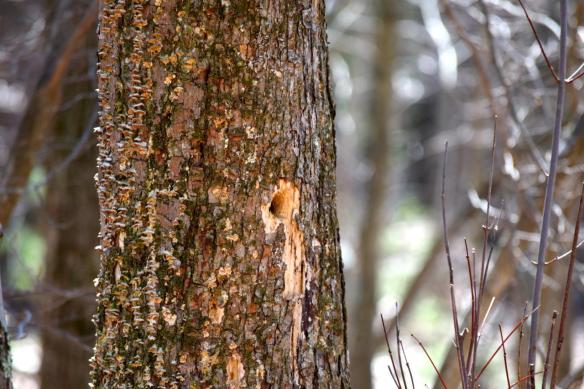 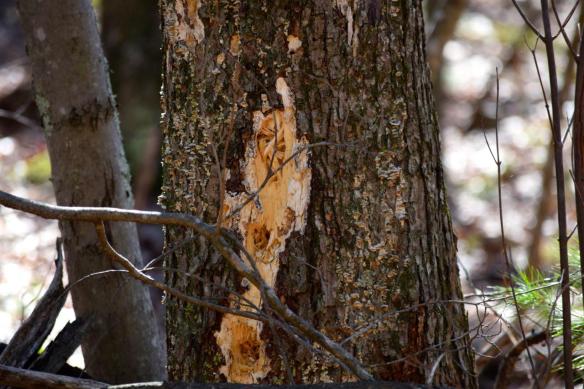 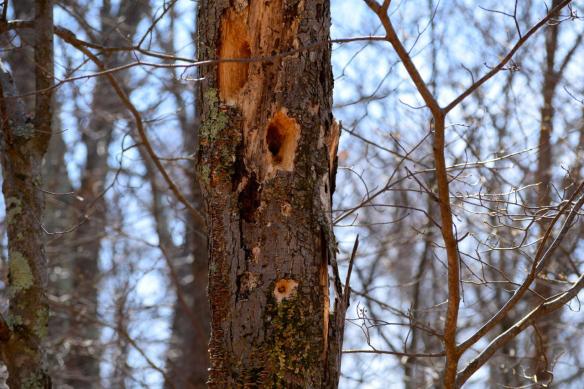 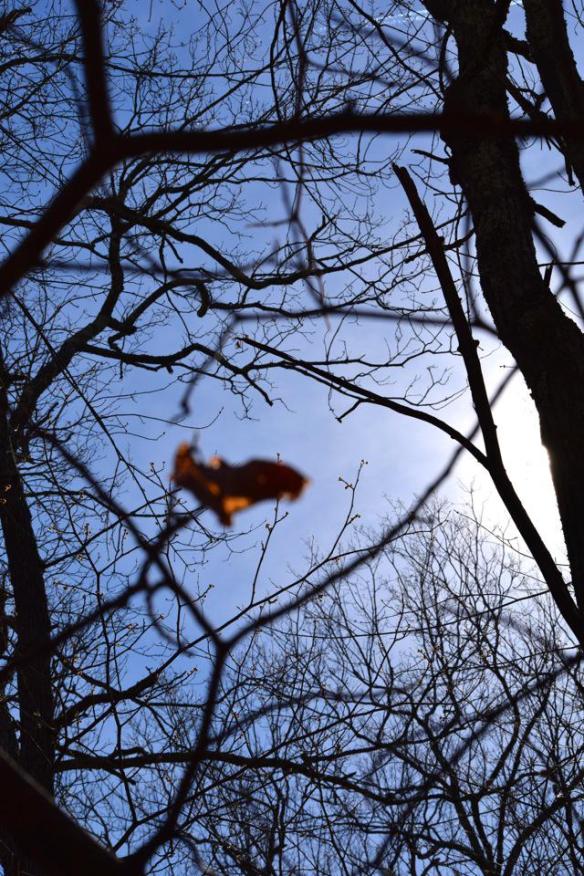 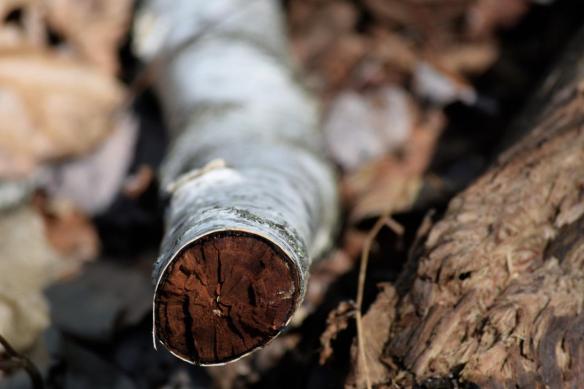 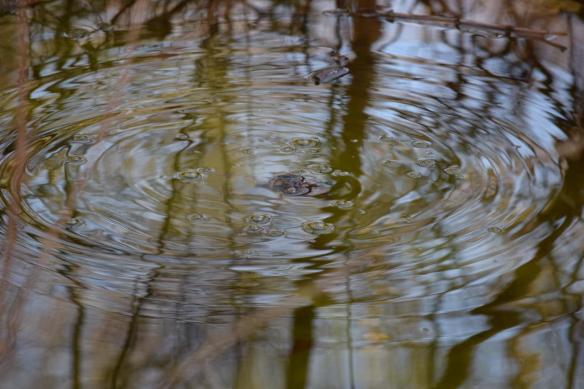 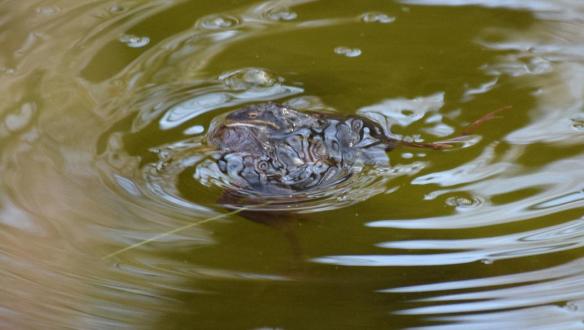 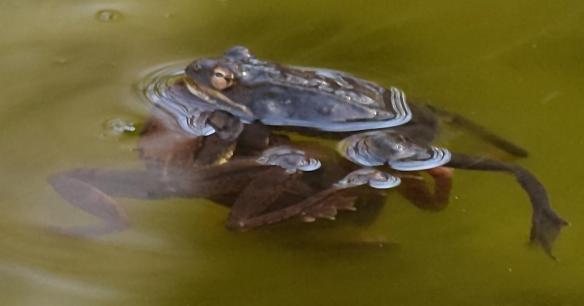 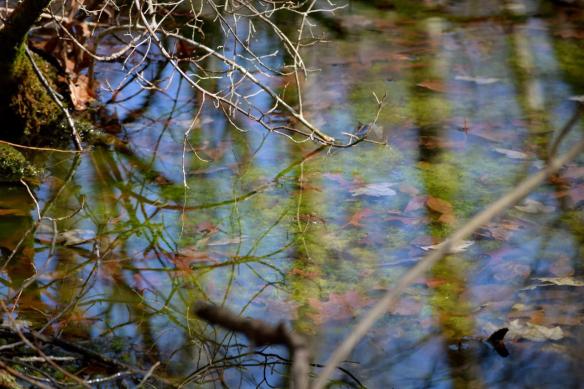 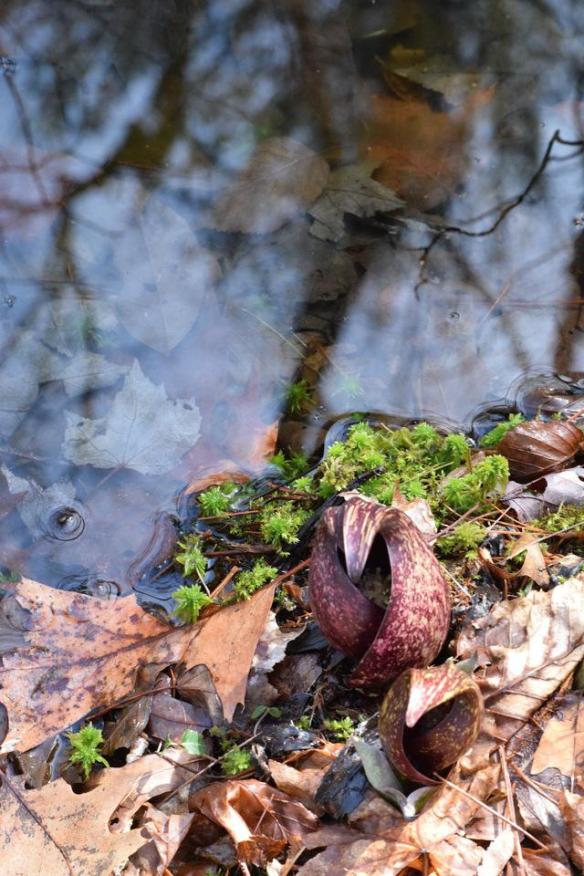 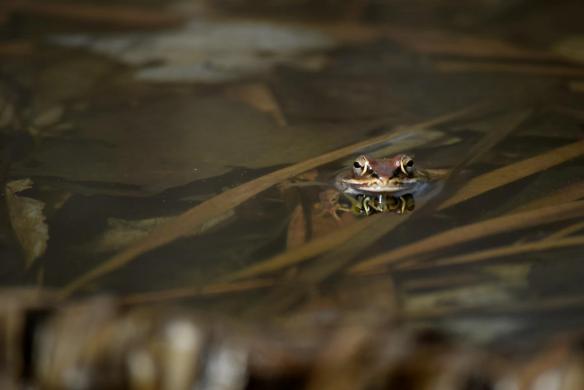 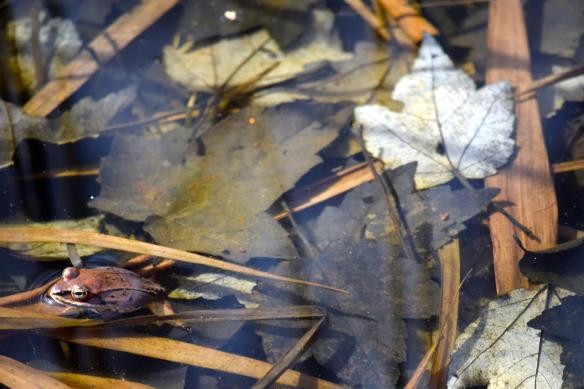 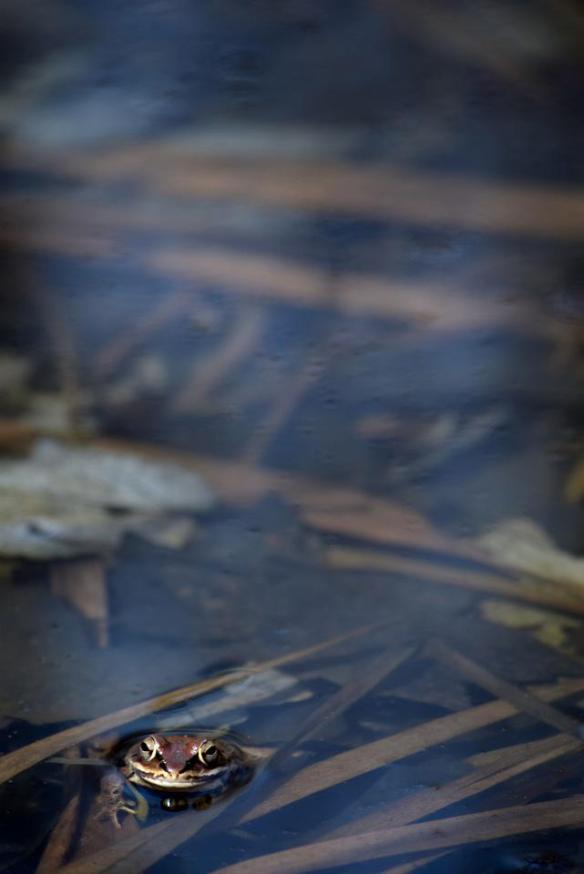 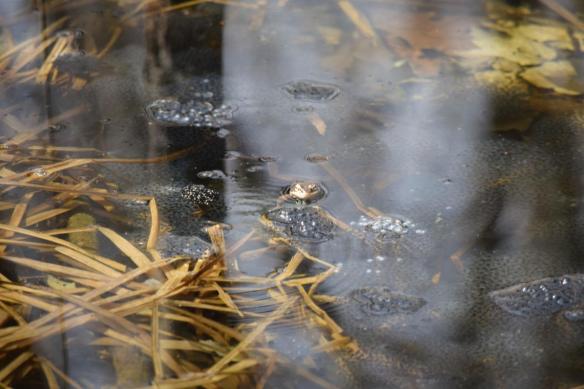 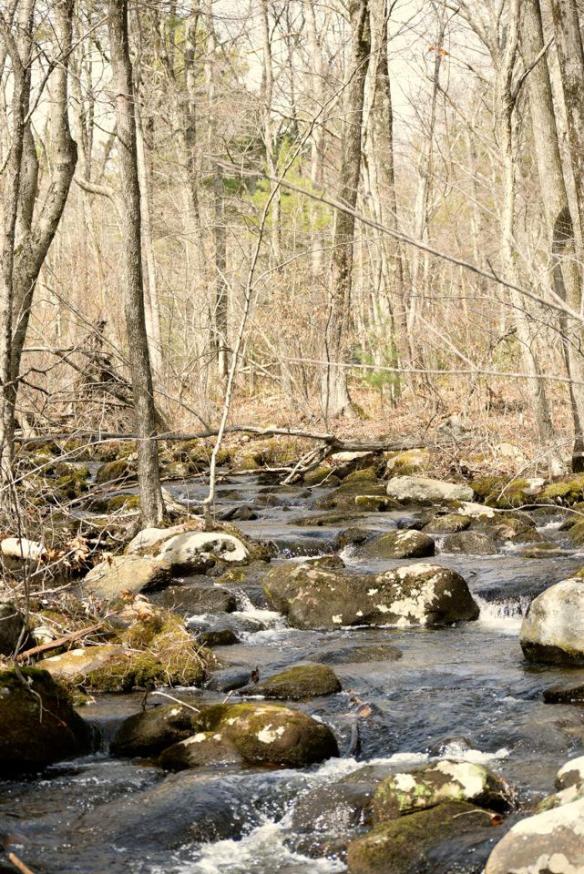 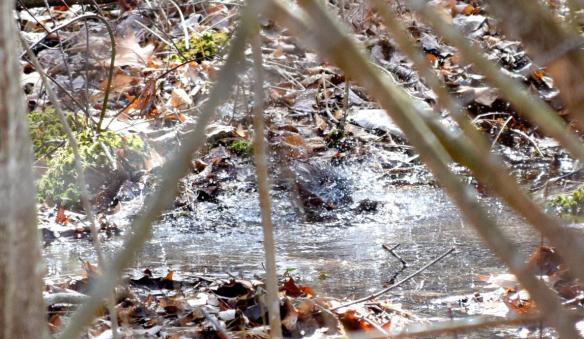 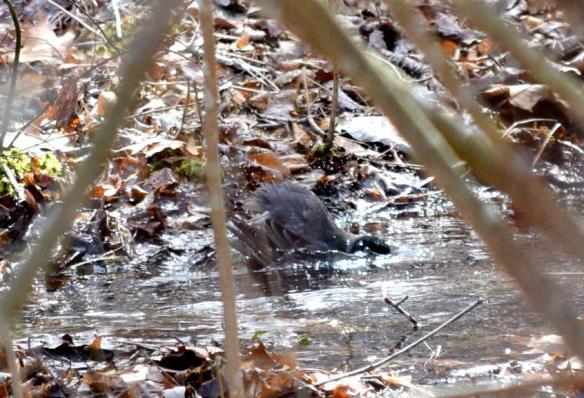 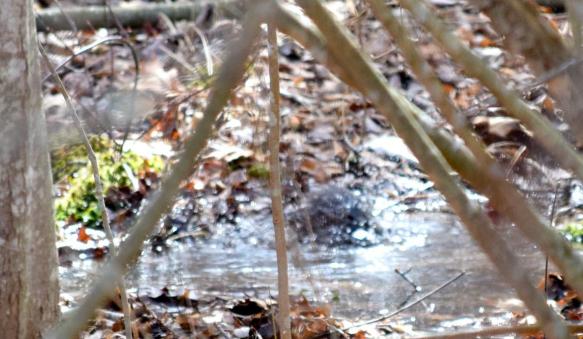 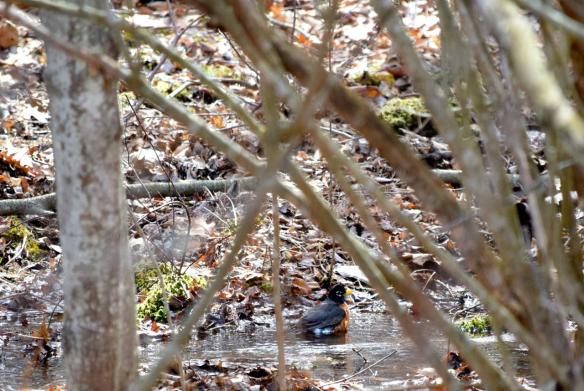 The first photo is of a rainy day duck (in our pond) on a very cold day, poor thing.

The rest of the pictures are from today…….when…..

…..all by my lonesome, I went for a ramble in the forest by our house.  The air was sweet, woodsy, smelled of moss, and was gentle on the face.  The tops of the tall trees swayed softly in the breeze.  I stopped to look up up up at the blue sky and bare branches bending and waving, never stopping yet almost rhythmically, like the ripples of water in the pond which are never still.

I picked and chewed on wintergreen.

I walked as quietly as I could.

I noticed that the Mountain Laurel was brightening up.

I had my camera and put things in my pocket; acorns, moss, and a piece of bark.

I thought it would be nice if Joanna was with me, too.

I saw a tree which had woodpecker holes all over it (the photos are all of the same tree) I guess it’s full of nice tasty bugs.

I was following the voices of wood-frogs.

I saw something in the water that looked too big to be a frog.  It was rolling around just underneath and small breathing bubbles were popping at the surface.  Alarmed, I stood and observed.  Soon I realized I was witnessing three or maybe even four frogs mating all together in one clump.  They were almost silent the 10 or so minutes I stood there….only one of them let out one very small froggy-groan.  I don’t think things were going well.

The beaver dam pond was full of mating wood frogs but the moment they sensed my presence they stopped their callings.  “I am so sorry to have disturbed you”,  I said, but I was rather offended, too.  I wished there was some way I could let the wildlife know that I am a friend.  I sat under a pine tree for a long time.  There was a babysitter in the nursery of frog eggs staring cautiously at me.

Then, just as I was almost home, I came to a running spring and saw the marvelous sight of a robin thoroughly enjoying a bath.

5 thoughts on “I am so sorry to have disturbed you”