The moon was quite distracting two nights ago.

Spring in general is quite distracting and I mean that in the very best of ways….after a quiet winter all nature is alive with growing things, singing birds, visiting ducks, opening buds, blooming flowers,,,,,,,and procreating toads.

I have an affection for toads.  Thanks to the fabulous Handbook of Nature Study, I have learned some charming basics of their simple yet fascinating ways.

“Whoever has not had a pet toad has missed a most entertaining experience.  Toad actions are surprisingly interesting; one of my safeguards against the blues is the memory of the thoughtful way one of my pet toads rubbed and patted its stomach with its little hands after it had swallowed a June bug.” page 170

Every time I read the above quote I am filled with longing for a pet toad of my own.  I need an aquarium and a toad.  This would currently be the ideal time for finding a toad, I could take a pick from a very many many many of them right out of my own pond.  But soon they will be done with laying eggs and hop away again and we will only come across them randomly in the woods as we walk along.

Toads lay their eggs in very long strings of black dots.  Soon a jelly will form around the eggs and the tadpoles will develop, tiny at first and then growing little by little until soon a miniature  toad will be perfectly formed about the size of a pencil eraser.  When that happens, they will hop out of the pond to make their way in the world.  It’s so fun to watch year and after year.

Male toads are smaller than the females, which are plump with eggs.  All the single males sit on the side of the pond and sing a magnetic song….with the purpose of calling to himself a lovely female.

I sat and watched this one for quite a while, it never moved, and never attracted a female.  I hope it had success after I left. 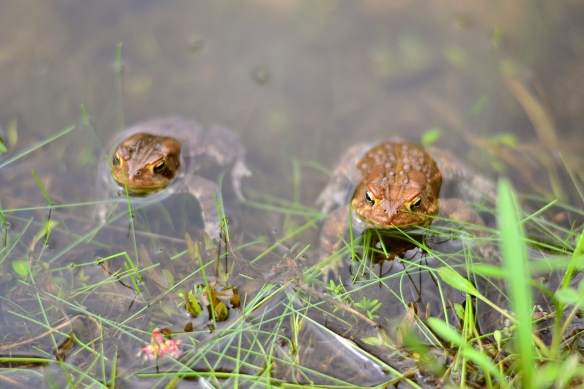 The males are so ready for action that when the kids catch one it immediately hugs their hand or  wrist, and needs to be pried gently off.  Interestingly, if a male tries to “hug” another male, he knows something is wrong right away and lets go almost as soon as it grips.  “begs pardon”

Our dog Parker came to investigate along with us and caught a couple of toads in his mouth.  While Sarah and I were yelling at him, he rushed away up the bank with his prize.  But very soon he dropped them and started gagging repeatedly and foaming at the mouth.  I was telling my friend about this and she said that her dog did the same thing.  She found out that the toads spit some kind of nasty fluid which make the dogs drop them….a lovely defense mechanism.

I learned more this morning:  “The warts upon the back are glands, which secrete a substance disagreeable for the animal seeking toad dinners.  This is especially true of the glands in the elongated swellings above and just back of the ear, which are called the parotid glands; these give forth a milky, poisonous substance when the toad is seized by an enemy, although the snakes do not seem to mid it.”  page 173

It eats insects and worms.
It doesn’t drink water, it absorbs it through its skin.
It burrows into the ground, typically staying there during the day and coming out at night to eat…also, it burrows deeply into the earth to sleep all winter….awaking in the warmth of spring.
It breathes air by swallowing it into the lungs.
It sheds its skin as it grows, and eats it.
It likes having its back scratched gently.
Its chief enemy is the snake. 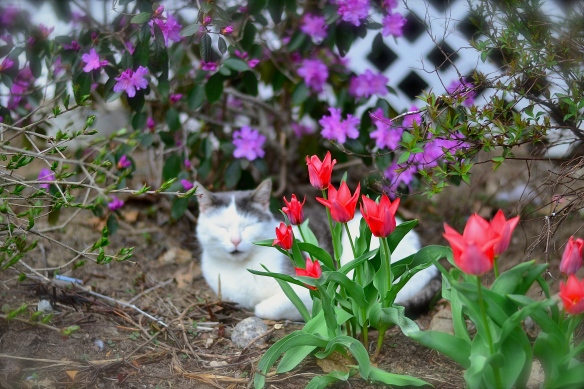 I like to sleep in the garden amongst the tulips.  ~Snickers 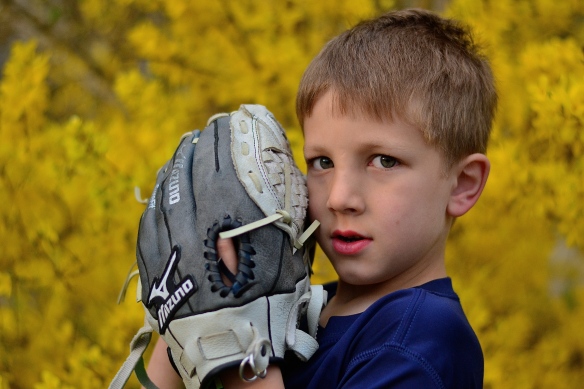 This little boy SETH is recovering from ear infections, bronchitis and a cracked nose (trampoline collision with Caleb)…but nothing slows him down…usually has a glove and baseball at all times and dirt on the knees and under the fingernails.  Very rare boy, one of a kind really, and belongs to a proud mama and papa.

6 thoughts on “my favorite amphibian”