I looked for the tiny ring all over the house.
Not only I, but my whole family.
Under the radiators.
Under the beds.
In all my jewelry boxes.
In the pigs on my kitchen windowsill.
On the piano.
Under all the furniture.
Down the drain.
In the bedding.
Under the fridge.
On the counters.
Behind washer and dryer.
In the lint drawer.
In my bed.
In the bathrooms.
In the couch (twice) cracks, cushions.
Under throw rugs.
In the bookshelves, behind them, under them.
In the clothes in my dresser, pockets of jeans, coats, and aprons.

I searched diligently for an entire week, I vacuumed, dusted, swept, moaned, groaned, cried, howled, sighed, talked about it incessantly, offered rewards, and had nightmares all because of my beautiful lost Tiffany ring.  By the end of the week, I began to accept the fact that it was lost forever.  I even began dropping it from conversations with my loved ones.

We had another snow storm on Saturday, so on Sunday after the skies cleared up and the snow melted off the roads I thought I would get out of the house with the kids.  I got myself dressed and thought I would put a ring on my right hand, which felt rather blank without decoration.  (I’ve been punishing myself by not wearing any superfluous rings.  Maybe deep down inside I felt they were safer in the jewelry box.) 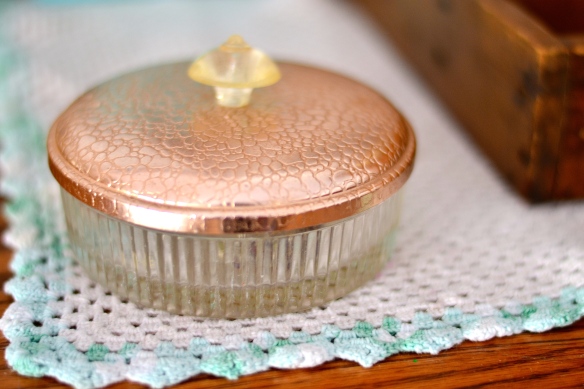 I was alone in my quiet bedroom as I walked over to my dresser.  I lifted the lid to the glass dish in which I keep my rings ….. 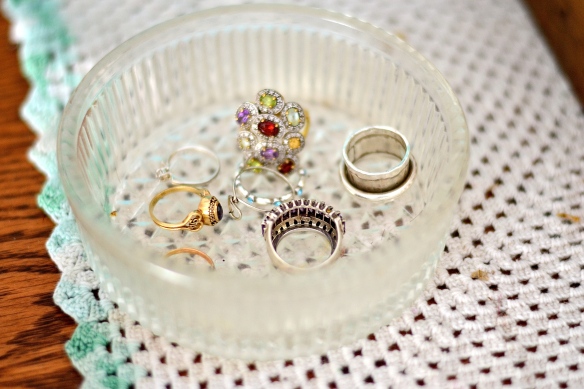 I chose one and slipped it on my pointer finger.  It was a purple stoned ring that I bought at Brimfield with my sister a few years ago.

It felt loose and seemed a bit too flashy for shopping at the mall with the kids so I took it off and put it back. 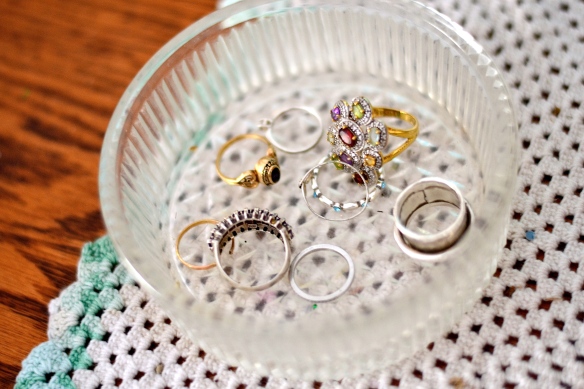 As I placed it in the dish, I took a moment to see if there was a different one to wear.  At the very same time……I saw my missing ring.

It had been hidden inside the purple one.  (see above photo)  I had looked in the dish several times, even stirred the rings around with my finger, and never saw it.

I stood in shock for a moment and then picked it up.  I felt nothing but disbelief and shame.  I slipped it on my finger and walked out of my room.  I didn’t feel like celebrating, I felt rather stupid, but I knew after all my fussing I had to do something so I loudly announced, “I found my ring!!” to the family.  The children groaned when I told them where it was.

WE HAD SEARCHED AND SEARCHED THE ENTIRE HOUSE, FIT TO BE TIED, AND ALL ALONG IT WAS RIGHT WHERE IT WAS SUPPOSED TO BE.

And now it’s back on my joyous finger again.