There is a pumpkin taped to the side door, made from orange construction paper by one small five year old.  Beyond the glass of that same door there is a garden flag hanging from the porch that has an orange fabric pumpkin sewn to it, and beyond that there are glowing orange trees.  At this time of year, orange seems to be everywhere.

This is a blog post about a handmade orange Hobbes.  My boys love to read Calvin and Hobbes comic books and David especially has such a fondness for them.  After reading the comic books for a while, David thought he would make himself a Hobbes.  He didn’t think about trying to purchase one, because he watched a documentary about Calvin and Hobbes and learned that Bill Watterson didn’t want companies making Hobbes or other merchandise that goes along with the comic.  “I made Calvin and Hobbes as a comic strip.  That’s all I want them to be.”  David knew if he wanted a Hobbes he had to make one himself.

First of all, he needed some orange material.  He had just the thing in his dresser.

For Hobbes’ white belly he used……another shirt from his dresser.

The next thing he needed was a pattern. 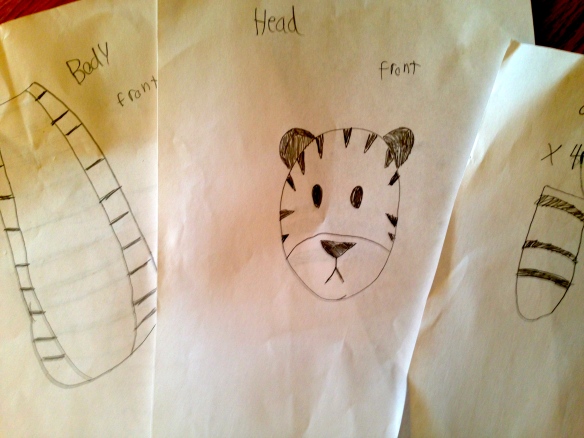 After drawing his pattern, he set to work.  He had help in threading the needles and taking out knots.  He used a black sharpie to give Hobbes his stripes and then took a break to scrub ink off the wooden floor in the master bedroom, where he worked.  He had various other problems, and even put Hobbes aside for a month or so, but eventually completed him last week.  He had him on his shoulder for a day and then unfortunately his little brother somehow ended up with him.  When David finally found him, to his horror Hobbes’ arm was hanging off by a long string and a seam had opened, exposing stuffing.  He was tempted to throw Hobbes away but put him back on the sewing table instead, to work on after his emotions cooled.

David is home sick today and as a surprise, someone who loves him very much reinforced Hobbes’ seams.  David was sound asleep when it happened, so when he woke up, he was surprised to find Hobbes on his pillow, ready to spend time with his boy once again.  They are currently on the couch watching Wild Kratts.