I talk to him when I’m lonesome like;
and I’m sure he understands.
When he looks at me so attentively,
and gently licks my hands;
then he rubs his nose on my tailored clothes,
but I never say naught thereat.
For the good Lord knows
I can buy more clothes,
but never a friend like that.
~W. Dayton Wedgefarth

I just downloaded some photos to my computer while sitting in the living room with Rich, David, Caleb, Seth, Sarah, and Grace.  Our dog, Parker, was at my feet but I didn’t notice him at all.  He is always there.  The kids were watching Phineas and Ferb and I needed to think so I could write this blog post so I got up to go to our new addition.  As soon as I stood up, Parker did too, and he is the only one who followed me into the room.  He is lying at my feet again, oblivious, as I type this post all about him.

We got him when he was a puppy and he is almost 7 years old now.  After he grew up out of puppydom, I was so very busy with homeschooling and having Seth and Sarah that he was tied up outside at a doghouse, and left there.  That sounds bad.  Really, the issue was that if he was ever free, he would run away immediately, up the road, to visit people.  It was terrible.  We would try to let him in the house with us but if we were not careful, he would literally bolt out the door *like the house was on fire* every time it opened.  Consequently, he was tied up at his doghouse more often than not.  He had daily walks, many of them, probably four or five a day (or more).  We all walked the dog, and Rich took him running.  He had plenty of exercise but he was sad, for he was a family dog and wanted to be with his people all the time.

One time I took him for a walk with Sarah in the stroller (not my smartest decision).  It was fine until he all of a sudden bolted and tipped Sarah over into the ditch.  She survived it, but the dog almost didn’t.

Another time I tried walking him and he was so excited he started racing as fast as he could down the hill.  I was so scared (determined not to lose him by letting go of his leash) that I w#t my pants.

He ran up the road and the neighbors called animal control and he was impounded.  (two or three times)

He ran up the road and got into another person’s house and tracked mud on her carpet.  She came down and yelled at me.  I offered to pay to get it cleaned but she just wanted to yell.

One time he got loose when the little boys were getting on the bus and he went right on the bus with them.  I could not get him off it (in my pjs of course) until the driver opened the back.  I cried all morning, so upset, thinking of the lawsuits that could have happened.  Yes, I can laugh about it now but at the time I was thinking about slipping sedative drugs into his dogfood.

Seth and Sarah grew.  I had some time to think and solve Parker’s problem.  The family (I think it was my sister) encouraged me to look into getting a hidden fence and I finally made some calls and Linda saved Parker’s life from one of boredom to one of luxury.  Parker soon grew fat from stealing pizza and butter out of the kitchen at every opportunity.

Training him to obey the hidden fence wasn’t hard once Rich convinced the trainer that he needed to simply be run into it a few times.  After he understood his boundaries, life (cue music) was grand again.  The guilt I had felt for so long over this animal was gone.  Parker was no longer tied down at his dog house or terrorizing the neighborhood.

Truly, he is all reckless love, and never hurt anyone, but his great adoration of humans made him desire freedom and visits at all costs.

He has been a house dog, a true family dog, for a few years now but can go outside any time he wants.  He scratches the heck out of the front door whenever he wants to come in.

He is Ethan’s dog.  I cannot understand his devotion to me.  I don’t snuggle with him or coo at him like his boy.  But he is always there.  Always by my side.  Have I ever told you that I prefer cats?  I don’t like dogs, especially big ones?  But this dog…..(do I dare say?) has  pretty much won my heart.

Another thing he enjoys doing with “his” stuffed creatures is burying them outside.  I am always startled when I finally notice him silently standing by the door waiting for me to let him out (he sometimes has to wait a while).

It is an event, and it usually takes some time for him to settle on the most perfect spot to bury it.

This is one that the kids rediscovered and brought inside to show me.  See Parker’s paw? He wants it back I bet.

Being a foot rest.

Showing me his special eye-glowing trick while being Too Close to Cat for Comfort.

Making sure everyone is okay.

He loves to go to the coop with me and always begs for a nice fresh egg.  If I give him one, he carries it in his mouth gently until we get to the driveway and then he lets it drop (gently) so the egg cracks and he can lap up the goods. 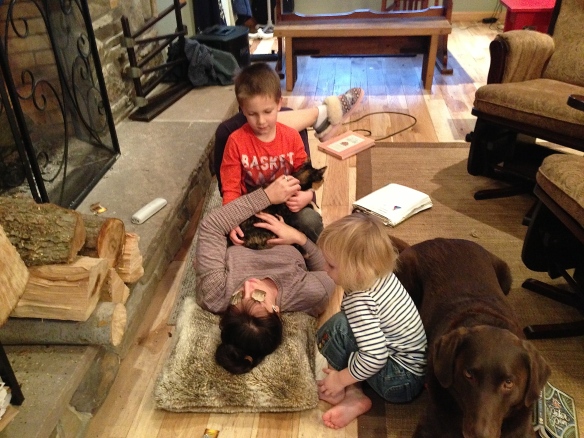 I was treating my puffy eyes with tea bags with kids all over me, and a cat, and still. … he was there.

Being a good armrest.

Yesterday, Parker was bleeding from the mouth and I did not know why.  He was lying on the floor just like you see in that picture, only he was on the hard wood in my room next to me while Seth and I were busy sewing a pillow.  He made a whining noise and when he got up I noticed two small puddles of watery blood on the floor right where his nose/lips had been.  My heart lurched as I touched it, believing perhaps it was just a dried up dirty spot that I hadn’t cleaned up yet (because I keep my floors oh so spotless).   No, indeed the spot was wet and slimy.  I immediately told Seth to wait a minute so I could look into Parker’s mouth. 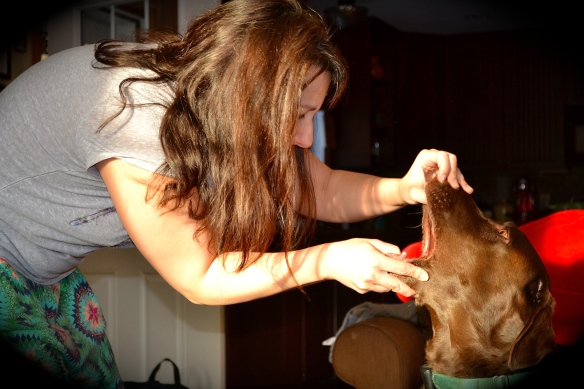 I didn’t see any cut but when I looked at my fingers they were red.  He definitely had some sort of bleeding, and I guessed it was internal.

My dog was sick.  My dog had a problem.

I was uneasy for hours, keeping an eye on him.  Every time he plopped on the floor to rest I thought he was getting worse.  I knew I would have to call the vet if he continued to “suffer”.

UNTIL.  Later on, I walked through my room and noticed THIS:

He had eaten a marker in his spare time.  I asked him about it later and he said nothing.  But his eyes said, “They are irresistible, can I have it back, pleeeeeeeese?”

In my utter relief, I was proud of him for using such a big word and being so polite about it.  I also realized once again that in this house I am usually the only one with problems!

This is the pillow Seth made.

And this is an early spring day.

Jacob and Ethan are at wrestling, the rest of us are home but Grace has a singing event later.  I have a hair appointment at 3:30 and I can’t wait.  I think I will get there early so I can sit in the fireplace room and read fashion magazines (not my typical reading material).  Seriously, we have about 12 inches of deep snow but the sun is shining and the birds are all singing deep in the woods and around the house, they are happy and I take my cue from nature:  SPRING IS COMING!  Thank you, God.